The usual answer to what are the Beacon Interval recommended settings is to use the default value (100ms). And that’s because it’s a fairly sensitive setting that can mess up the way the network functions (in regards to the connection with client devices and between access points).

But then again, you paid for the entire router (or AP), so you want to use the entire spectrum of settings and if it shouldn’t be tampered with, why is it an option that can be adjusted to being with? Turns out that there are some applications where it can make sense to adjust the Beacon Interval, so I think it would be interesting to explore some them. But before going forward, what exactly is the role of the Beacon Interval?

What purpose does the Beacon Interval serve?

The Beacon Interval refers to the time between the beacon transmissions. This time is measured (or expressed) in TUs (Time Units) and, when an access point has to send the beacon, it is known as TBTT (Target Beacon Transmission Time).

These beacon frames are small bits of data, so, the transmission of these frames at the default Beacon Interval value for a couple of SSIDs will have pretty much no impact on the network performance. But, if there are lots of SSIDs, then the overhead increases a lot eating up important portions of the bandwidth.

Then again, that was the case years ago, before the 802.11ac became a thing and even the 802.11n WiFi standard could handle a dozen SSIDs. At the same time, a lot of people swear that changing the beacon interval could improve their network performance, so let’s see what happens when you increase or lower it.

What happens when the Beacon Interval are too high?

When you increase the Beacon Interval, then less beacons will be transmitted, significantly lowering the overhead, but this can lead to all sorts of issues. Let’s say you’re in an office and there are lots of access points, all transmitting their own beacons – in this case, it may not be a bad idea to slightly increase the transmission rate.

Be aware that I said slightly, because if you set the interval too high, therefore taking too long to transmit the beacon can lead to problems while roaming between APs. And it can also lead to disconnections from the network. That’s because in ideal conditions, the beacons are transmitted often enough to keep everything synchronized.

So, all the data that I mentioned in the previous section won’t arrive to near-by access points in time or the client device won’t receive the info, which means that it will promptly disconnect from the network.

What happens when the Beacon Interval are too low?

If you decrease the Beacon Interval, then the beacons will be transmitted more often and, as expected, this does lead to a higher overhead, therefore decreasing the bandwidth. And not only that, because there are a few other issues that can arise.

As I previously mentioned, the beacon frame includes the supported rates and, since the point is to be supported by devices from across all generations, even the legacy ones, then the data transmission is done on the older standards (802.11a/b/g). And, as we saw on the Airtime Fairness analysis, slower, legacy client devices slow down the network, which is why having a more often transmission of beacon frames means a worse overall network performance.

Additionally, let’s not forget that if there are lots of access points all broadcasting their beacon frames a lot more often, it will lead to overlapping issues and a huge amount of interference.

Why would you want to change the Beacon Interval?

As I previously said, it can make sense to make the transmission interval a bit longer when there are lots of access points, all broadcasting their data, but other than that, there are very few reasons to mess with these settings.

That’s because there are other ways to improve the network performance. Let’s say you have problems with the overhead, then it’s best to cut down on the number of SSIDs and if that’s not an option, then it’s wise to eliminate the possibility to transmit beacon frames on the old WiFi standard. That can be done by setting the Wireless Mode to 802.11n on the 2.4GHz network and to 802.11n/ac/ax on the 5GHz network (on the router or access point). 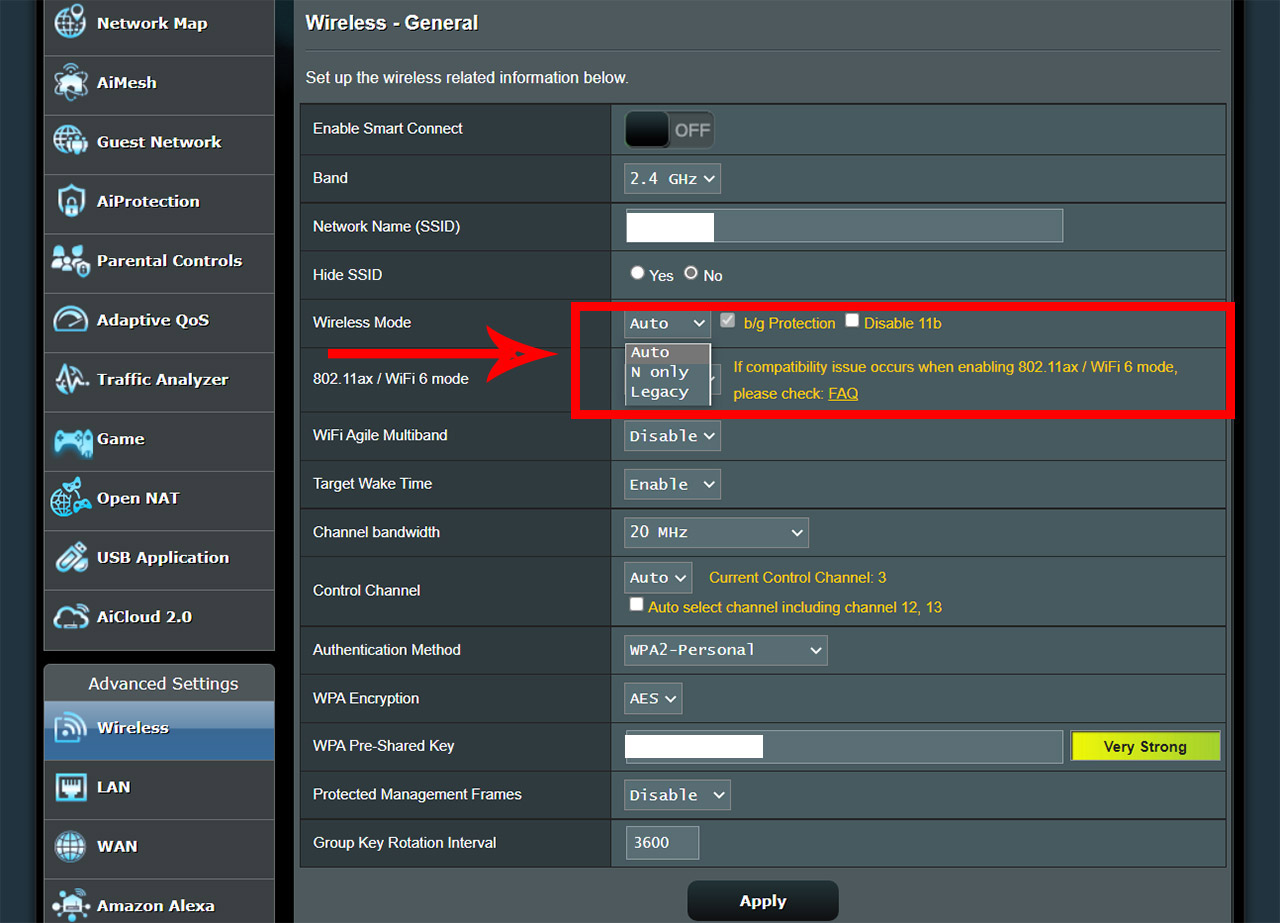 So, as a conclusion, I would say that it’s better to leave the Beacon Interval to the default settings since both the APs and the client devices are usually configured to work best at that rate. If you do need to make changes, then adjust it only slightly and always make sure to test if all your client devices are properly connected.