I know that the question on whether using a WiFi extender slows down the Internet speed pops up quite a lot and, due to the weird phrasing, the answer is no, it does not have any impact on your Internet speed. The one that you get from your ISP. But it does have a heavy impact on the bandwidth and the WiFi speed experienced by the client devices that are connected to the WiFi extender.

It is actually as severe as going past 50% on a single hop (it means using a single extender). But, if you decide to use a secondary WiFi extender to connect to the first, it can be game over for your Internet connection, since the bandwidth will be reduced to nothing. 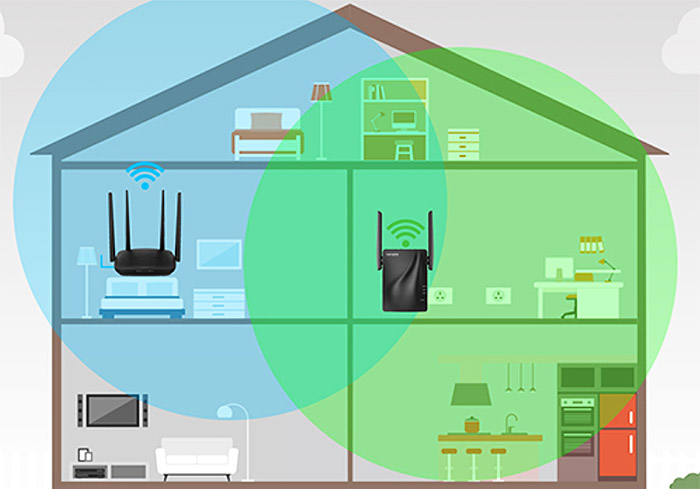 There’s also the fact that very rarely do you see WiFi extenders actually have the entire spectrum of features that your powerful router has. But, at the same time, we do have WiFi 6 extenders available right now (such as the Rock Space AX1800 that I recently tested), so have things actually improve?

In a sense, yes, because there is more bandwidth from which the extender can cut, but the concept remains the same. If this didn’t satisfy you curiosity, then let’s go more in-depth and explore this subject a bit more.

How does a WiFi extender work?

In case your router doesn’t reach a certain area in your home, you have two main options. Either change the router for a better model which may or may not have a better coverage – think WiFi 6 routers that do work great for WiFi 6 clients, but won’t really improve the throughput or the coverage of WiFi 5 clients that much, if at all.

The second option is to rely on a separate device to cover that area. And it can be an access point which, in my opinion is the best scenario since you get no bandwidth or signal loss from the router or, if you don’t have the means of running cables throughput your home, you can use a WiFi extender.

The idea behind WiFi extenders is to take one of the radio bands signal from the router (copying the SSID, the passkey and the security encryption) and extend it farther out, allowing for a higher coverage. This sounds great, so what are the downsides?

Think of it this way, the data needs to be routed from the client device to the repeater and then the other way around, and it also needs to go from the wireless repeater to the router and vice versa. This way, the bandwidth is essentially cut in half. Then, if you have a good wireless repeater, such as a repurposed EnGenius access point, then things may go decently well, but why would you use an expensive device at less than half of its potential?

No, most people will use a cheap extender or an old router to accomplish this task. And they will also most likely repeat the 2.4GHz band which will give you a few Mbps, suitable for some Internet browsing. But don’t expect streaming to your TV or anything of the sorts. That being said, be aware that the wireless extenders will allow you to only extend a single radio, you can’t extend both at the same time.

So, any client device that connects to the extender will have to use a single-band repeater. I am not saying it’s not going to work, it’s just that there are better options out there, although a bit more costly than, let’s say, a RockSpace AC1200 WiFi extender.

As an early conclusion, it’s clear that the bandwidth (and the throughput) will have to suffer when you use a wireless extender and, by association, the Internet speed that arrives at those specific clients will be limited as well.

In a sense, one may see it this way, but they’re a bit more than the regular WiFi extenders. Well, some of them more, others less. The dual-band mesh systems are usually cheaper and they use one radio band for the backhaul traffic (overhead, inter-connection data), while the other is left for the client devices.

Some manufacturers, such as Eero, leave all radio bands open for both backhaul and client devices connection which is an interesting approach and may lead to a better performance. Although it’s still not going to be that great even at the first hop (if you connect to the first mesh node). If you dare go through two hops, the bandwidth will be severely affected, in the same manner as the wireless extenders.

Then again, a lot of manufacturers do call their additional mesh nodes as extenders (such as Ubiquiti did with its AmpliFi system), so they’re a bit more honest. But, be aware that these devices are especially tailored to work with each other, so there should be perfect hardware compatibility, as well as the support for the same features.

In contrast, imagine connecting a 802.11n router set as a wireless repeater to a WiFi 6 router that has 2.5GbE ports. It’s not going to look pretty (although it will technically work). One other advantage that the mesh systems have over the wireless extenders is the ability to have a dedicated band out of three bands.

This way, the secondary unit should offer almost the same throughput and have a similar bandwidth as the main node (the Orbi and the Multy X accomplished it with ease). So, what I am saying is that there are better options out there than using a wireless extender, even though a bit costlier.

Other better ways to extend my WiFi

I have already mentioned the WiFi mesh systems, but what if you want to keep your current router and add a new extender, not replace the whole thing? Even this way, you can still go the mesh WiFi system route. That’s because Asus offers Aimesh and TP-Link offers OneMesh.

What this means is that you can use different types of routers (from the same brand, of course) and inter-connect them to create a large single network. That’s what I did to link two large offices divided by a thick wall which was blocking any signal to pass through. So, if you have an Asus or a TP-Link router, you could get a secondary router, set it as a mesh node and have a better performance (and experience) than you would by using a wireless extender. You can also purchase a more powerful router and use the one that you already own as a mesh extender.

Another option that doesn’t involve cables is to use a powerline adapter, but they could be just as problematic as the wireless extenders themselves because these devices rely on how the electrical circuits were planned inside the house. So, if it’s on the same circuit, the speed will be good, otherwise, you most likely will experience lots of fluctuations.