The manufacturers of networking devices (mostly consumer-based) have been pushing forward the Airtime Fairness as one of the most reliable ways to make sure that the newer and more powerful client devices will play nice with the older (legacy) devices. But is it actually true and should you make sure that it’s enabled on your router (or access point)?

The general consensus is that it’s not a reliable feature and most tech experts will tell you to especially make sure it stays disabled. And there are a few good reasons for that, so let’s first explore the actual reason the airtime fairness was developed in the first place.

What’s the point of the Airtime Fairness?

The Airtime Fairness became available on wireless routers and access point more than a decade ago as the means to prevent older devices from slowing down the network. How does that actually happen? It’s simple. Imagine you’re on the road and, in the ideal situation, all cars would go at a similar speed, without creating any unnecessary jams.

But what happens when a slow car enters the road? The flow gets broken and even if there are faster cars around, all will need to wait until the slow car gets out of the road. I am not sure how good this analogy is, but you get the point. All devices need to wait their turn and the legacy clients are slow. And the Airtime Fairness will give every device a specific up time, so the old, legacy client devices will not slow down the entire network. 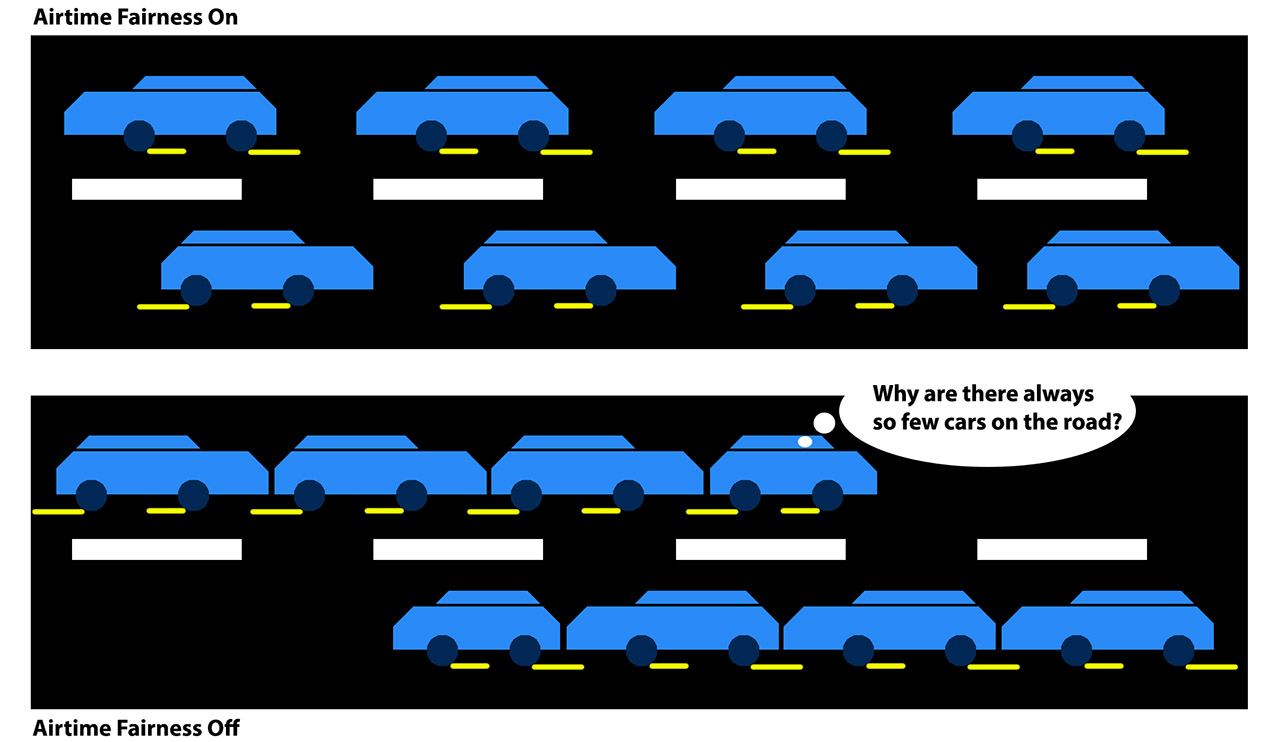 This way, not one (or a few) client/s will hog the bandwidth and, in case it takes longer for a slow client device to finish its task, the other devices do not need to wait it out. All sounds great, so what’s the problem? First of all, while Airtime Fairness seems like a standard, it’s actually not and each manufacturer is implementing it the way they see fit.

So, not only will it differ between brands of access points and routers, but it will most likely be implemented differently between entry-level and flagship devices of the same brand as well. The biggest issue though is the platform itself.

As Qualcomm states, the way they deliver Airtime Fairness when there are multiple types of client devices (supporting older and newer WiFi standards) is by measuring the throughput per device. This means that there should be equal allocation of capacity and a better throughput.

So, why is there a switch to turn this feature off? Well, the Airtime fairness also seems to allow only a certain number of clients on the network and, even if there are only a few client devices connected, their speed is limited as if the AP or router would be overcrowded.

As I have recently tested the Ubiquiti U6-LR, I noticed that there was no option to turn off the Airtime Fairness. And, since this AP is built on the Mediatek platform, does that mean that Airtime Fairness is missing or is implemented in such a manner, as to not warrant the need to turn it off? Since we’re talking about Ubiquiti APs (as an example), know that the nanoHD had the Airtime Fairness disabled with the option to enable it grayed out.

The most interesting thing is that the WiFi 6 AP, U6-LR does not have that option at all. How come? Unfortunately, I was unable to find a clear answer, but it does seem that the Airtime Fairness is simply working as intended, so there’s no need for the user to disable it. At the same time, some evidence may suggest that the feature may have been completely removed – what we saw on other Ubiquiti APs, such as the nanoHD.

In any case, some people have expressed concern that some of their IoT devices would not properly connect to the network due to having the Airtime Fairness always on. I will continue to investigate this situation and I will update the article as soon as I know more.

Since it’s the old devices that create issues for the newer ones, why not just put them in separate groups, so that the faster clients aren’t bothered by the slower ones. And that’s one of the reasons why there are dual-band and even triple-band routers available.

The 2.4GHz network is currently mostly dedicated to old and legacy client devices, while the 5GHz network is suitable for the faster clients (PCs, smartphones, laptops, smart TVs and so on). The Band Steering feature has the role of de-congesting a specific band, so in case a WiFi 6 device finds its way to the 2.4GHz network, it will be moved to the better-performing 5GHz one. Unfortunately, this is another feature left at the mercy of the manufacturer implementation and a lot of tech experts suggest turning it off as well (along with Airtime Fairness).

Should you turn Airtime Fairness off?

I don’t deny the usefulness of this feature if you have a lot of old devices and just one or a couple of clients from the newer WiFi standards, but how many people are in this situation nowadays? For example, I connect all my IoT devices and those that are stuck on the 802.11n standard to the 2.4GHz network.

Everything else is moved to the 5GHz and I have not needed to enable any extra function. I know that a lot of people do the same, so in most cases, the Airtime Fairness should be kept disabled, as it serves no real purpose.

The solution: Don’t use old devices?

I was slightly amused that a lot of people say that the solution for the band hogging is to just not have old devices to begin with. And it’s a bit of a tone-deaf solution, but it does have some merit. Yes, in 2022, you shouldn’t have any device that’s stuck on WiFi standard prior to 802.11n, but it can happen, especially with budget-constrained people or with those that have devices that are still ‘good enough’, so why would they upgrade them?

I am not going to enable consumerism, but electronic devices are a bit sensible in certain aspects. And the most important one is the security. I am confident to say that no legacy device can match a modern device’s security features (just think about WPA3). So, even if not for the Airtime Fairness issues, you should still consider upgrading devices that are using WiFi standards below 802.11n.