The DrayTek Vigor2926 is part of the latest Dual-WAN VPN router series released by the Taiwan-based manufacturer to aid the SMBs in their endeavour to achieve the maximum network security and reliability. The Vigor2926 is also the successor to the relatively popular Vigor2925 which was a security-focused broadband router that could offer a flexible LAN management (including VLAN), Load Balancing and FailOver abilities (thanks to the multi WAN ports), as well as SPI Firewall, VPN (LAN-to-LAN and Remote Dial-in) and a centralized management portal in order to control the router along with other compatible Vigor devices (such as VigorAP).

The DrayTek Vigor2926 picks up where the Vigor2925 left off (since the latter reached EOL), so, besides offering pretty much everything that its predecessor could, it comes with a more powerful processor and it features some improvements in terms of software. 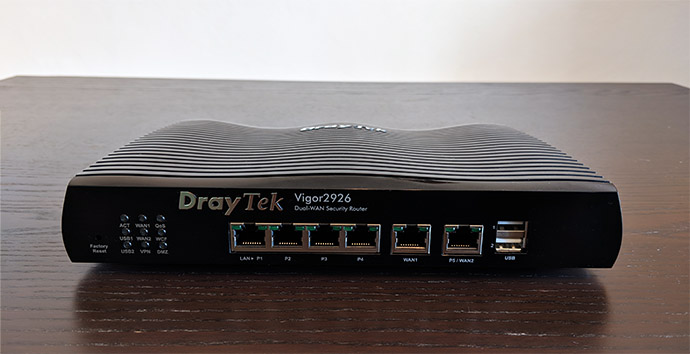 The DrayTek Vigor2926 wasn’t built to cater to the consumer market and its features are suitable for small to medium businesses, so it’s not surprise that the device lacks any WiFi capabilities (you’ll have to rely on wireless access points). At the same time, the new router series does include the Vigor2926n, the Vigor2926ac and the Vigor2926Vac, the first being single band (2.4GHz 802.11n), while the second offers dual-band capabilities (2.4GHz 802.11n and 5GHz 802.11ac) and the third is also dual-band, but it includes VoIP.

Design
Despite catering to the SMB audience, the DrayTek Vigor2926 steered clear of the industrial look (which is the most common among this type of devices) and, instead it decided to add some design elements to make the router stand out from the crowd. Sure, it still features a rectangular case, but on the top area, the plastic curves and creates a wave-like pattern filled with narrow canals that slightly expose the internal components (to help with the heat management). 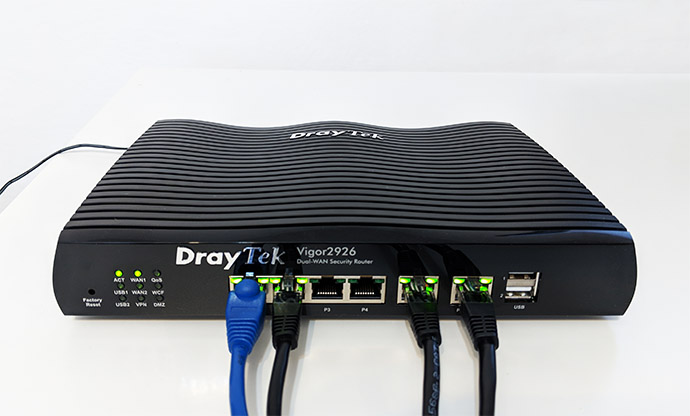 The front area is glossy black, while the top surface is covered by a black matte finish (doesn’t retain fingerprints) and the bottom half of the device is light grey. To get away from the design monotony, most routers went the minimalist Apple Airport-inspired way, so it’s interesting to see that some manufacturers still manage to find new ways to create a unique design (especially considering the Vigor2926 is a non-consumer device).

Furthermore the Vigor2926 is entirely made of plastic, unlike most other dual-WAN routers which are usually made of out metal, but DrayTek used quality materials, so the device ends up looking decently premium (not that SMBs are really that picky in this department). In terms of size, the router measures 9.48 x 6.50 x 1.73 inches, so it’s smaller and more compact than more consumer-type routers (such as the Netgear Nighthawk R7800 or Linksys WRT3200ACM) and it weighs about 1.1 pounds, which, along with the four silicone feet from the bottom side, ensure that the device won’t budge no matter the number of cables connected. 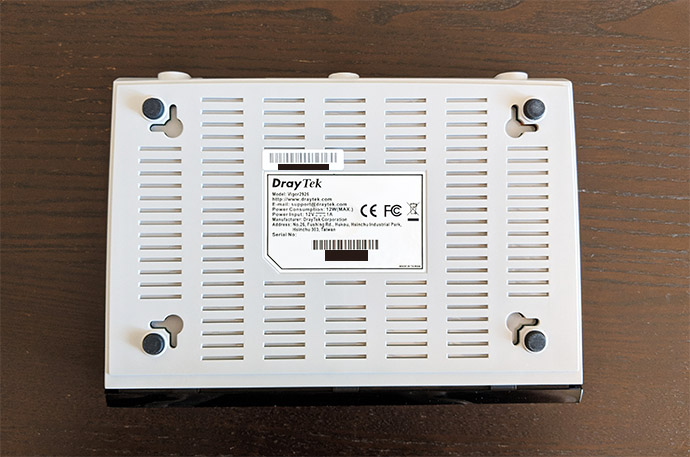 But, judging by the way it has positioned its ports, the DrayTek Vigor2926 seems to favour the wall mount position, instead simply sitting on a flat surface and this can easily be done thanks to the bidirectional holes on the bottom surface. Also here, the manufacturer has added lots of ventilation cut-outs to make sure that the device won’t overheat: when put under some stress, I can confirm that the router gets slightly warm on the top and bottom side towards the rear side, but it never shown signs of overheating.
When put next to the Vigor2925, the two routers look almost identical, sharing the same size, the same design (including the wave pattern), but the change comes on the front surface, where DrayTek decided to modify the order of the ports. 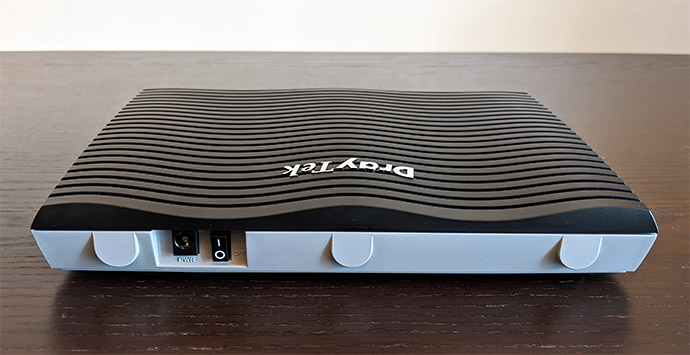 Further to the left, DrayTek put the Ethernet ports first and the two USB ports to the far right (the Vigor2925 had them the other way around), so, from the left, there are four Gigabit Ethernet LAN ports (each with a couple of LEDs, one responsible for Activity, so it will flash when data is being transmitted or received and the other shows the type of connection, so it will remain Off if the connection is made at 10/100 Mbps and will turn On when the connection is made at 1000 Mbps), a Gigabit WAN1 port (also has two LEDs that function in the same manner as on the LAN ports), a P5 / WAN2 port (you can connect a secondary Internet cable for Load Balancing and Failover functions, but the port can also work as a regular LAN port) and the USB ports (dedicated for connecting USB devices, including 3G/4G/LTE modems or Environmental Thermometers). On the rear side, DrayTek has positioned the Power connector and an On/Off switch, but you’ll also be able to notice that the device lacks any antenna ports (the reason for this is because the Vigor2925 is not a WiFi router).

Hardware
After I opened the case, I noticed that DrayTek has equipped the Vigor2926 with 128 MB Toshiba LF0525 TC58NVG0S3ETA00 CMOS NAND flash memory (just like its predecessor), 128 MB SDRAM DDR2 WINBOND W971GG6SB-25 G8173H400532 (also similar to the Vigor2925), but, because the manufacturer covered the main chip with an non-removable metal plate, I couldn’t see if it also uses a Lantiq CPU – fortunately, DrayTek has stated that the Vigor2926 indeed has a better CPU clocked at 720MHz for all variants. 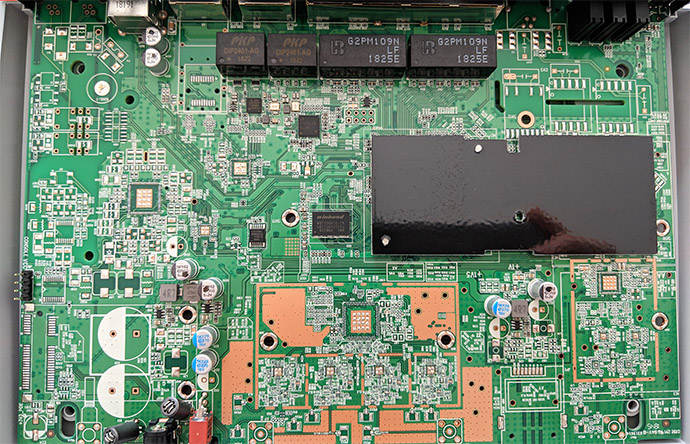 Features and Performance
DrayTek has been building and perfecting its broadband router series for a long time and the Vigor2926, despite lacking any wireless capabilities, it is a powerhouse in terms of features, allowing its users to configure almost every aspect of their network. The feature that will undoubtedly attract the most attention is the Dual-WAN capability which, by default will automatically balance the load between two connected WAN links. In layman terms, if you have a business that heavily relies on a continuous Internet connection, then you can either have two routers, each connected to a separate ISP or use the Vigor2926 which allows both connection at once (the two USB ports can also be used for adding separate 3G/4G/LTE modems which can be added to the load balancing pool).

After accessing the user interface, if you go under WAN > General Setup, you will notice that the Vigor2926 will display the status of the four WAN connections and, next to the Load Balance Mode, you can change between the Auto Weight and According to Line Speed. The way the Load Balancing feature works (by default) is that it calculates the ratio of the remaining bandwidth for each WAN, so the sessions are sent according to this ratio (more sessions sent to the WAN with the most remaining bandwidth), so the difference between the two is that the Auto Weight relies on a recent bandwidth peak to calculate the ratio, while the According to Line Speed will rely on the defined Line Speed that the admin has to configure (in General Setup > WAN1-4 – this will force the traffic through the WAN with the higher set speed).

Still next to the Load Balance Mode there’s a second set of options, one is IP Based and the other is Session Based. The former will use only one WAN interface, while the latter has the role of combining (aggregating) the bandwidth of the two (or more) WAN links, resulting in a higher throughput. The manufacturer warns that some servers may reject this type of connections, such as HTTPS websites because of security concerns (multiple IPs), but by going to Routing, Load-Balance / Route Policy, you can manage the outbound traffic, therefore specify which WAN interface should be used for those specific types of websites. Beside the Load Balancing feature, you can also set a WAN interface to become active in case the primary WAN connection fails or if it goes beyond the User defined Traffic Threshold (also known as the Failover mode).

To test the switch latency from WAN1 to WAN2 (and vice versa), I put WAN1 as the main Internet connection (set as Always On) and the WAN2 in Failover mode (both with the Load Balance active) and, I continuously pinged 8.8.8.8. This way, the router took approximately 2-3 seconds to move from WAN1 to WAN2 (it was almost instantaneously) and, after I reactivated the WAN1 connection, it took about 5 seconds to go from WAN2 to WAN1.

Besides the Dual-WAN feature, the Vigor2926 also offers multiple types of VPN connections: PPTP, IPsec, L2TP with IPsec, SSL (works through firewalls, as long as HTTPS traffic is allowed) and OpenVPN. The area of interest is going to be the VPN and Remote Access section, where you’ll have to enable a Remote Dial-in User for the PPTP, SSL and L2TP with IPsec and you’ll have to make some changes in IPSec General Setup and enable a new profile in the LAN-to-LAN section for the IPsec tunnel. Lastly, you can use the DrayTeK Smart VPN Client to run the VPN type of your choice (simply add the existing profile and insert the necessary credentials).

The router also supports VLAN tagging and Bandwidth Management which can limit the number of simultaneous sessions for your devices (IPv4 and IPv6 – you’ll get a warning if you exceed the max set number), you can also limit the bandwidth by IP (includes auto-adjustment to assign an equal amount of bandwidth for every active user); furthermore, there’s QoS where you can adjust the Inbound/Outbound bandwidth for each WAN connection based on preset Classes (you’ll have to create rules that can then be applied on the General Setup table) and, lastly, there’s the APP QoS which allows you to set the suitable priorities to all the protocols (DNS, FTP, SMTP, TELNET and so on). 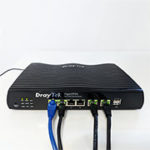