The Dreame D9 robot vacuum cleaner can be considered the current mid-range model from the Chinese manufacturer and yes, just like many other fairly priced, but still quite powerful and feature-rich robot vacuum cleaners from the market, it was developed in partnership with Xiaomi.

Indeed, we are witnessing Xiaomi’s path towards conquering the robot vacuum cleaner market and it’s doing a good job because the devices that I tested were still working really well after a couple of months of use (still not yet sure about the long-term reliability). Truth be told, the entry-level and the mid-range segment of the robot vacuum cleaner market was severely under-served for a very long time, so a device such as the Dreame D9 will be very appealing. It’s more than that because the device relies on the Lidar technology to map the house and to move around far better (than the early Roomba models) and it does have a very good suction performance (3000Pa) which should prove useful when vacuuming a carpet. 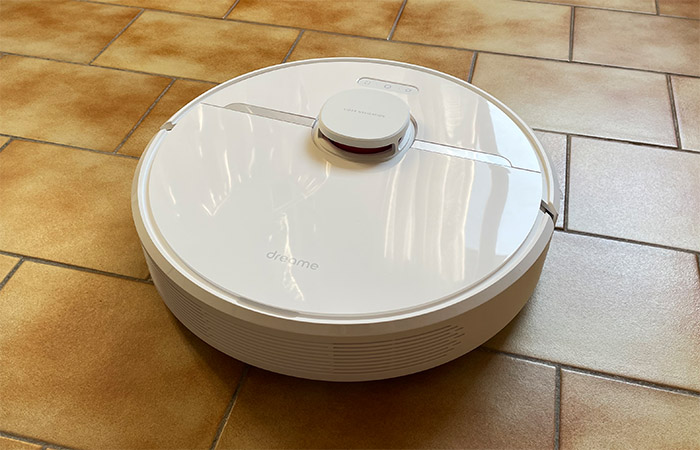 Additionally, the Dreame D9 comes with a mop, a fairly long lasting battery life and an app. So you get the usual no-go zones, the multi-floor mapping and it does support integration with Amazon Alexa. At the same time, the Dreame D9 does not have a self-emptying station, unlike the Lydsto R1 and the Roidmi Eve Plus, but this was a necessary omission to keep the price a bit lower than its main competitors. That being said, let’s put the Dreame D9 to the test and see whether it deserves a place in your home.

There isn’t that much of a design variety when it comes to the robot vacuum cleaners and that’s because the circular shape and the low profile allows the device to easily move around the room and thoroughly clean it. The Dreame D9 follows the same design blueprint, so expect a fairly large cylindrical case (it measures 13.7 x 13.7 x 3.8 inches, so it’s no larger than the Roidmi Eve Plus) which is covered by a glossy white finish. The manufacturer has decided to put the opening for the Lidar sensor off center (I do like it to be centered, but that’s a matter of taste) and next to it, there’s a narrow band with three buttons with LEDs. The left button will start the Spot Clean Mode (the robot vacuum cleaner will only move around that spot) and the center button can be used for starting the Cleaning process (press and hold it for 3 seconds) or for powering up the device (be aware that in case the LED start flashing orange, it means that the D9 has encountered an error). 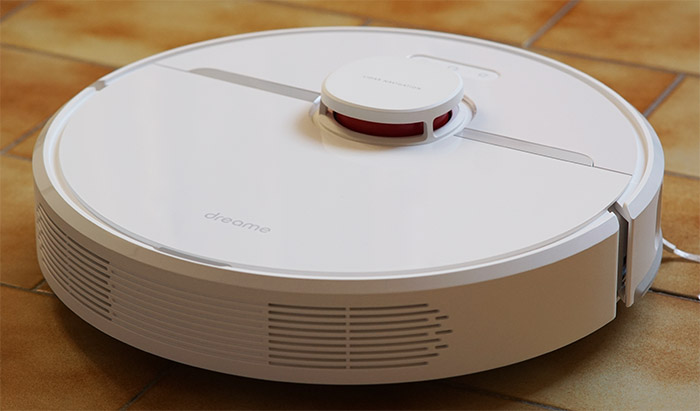 If you press the right button, it will return the vacuum cleaner to its base. After checking out the user manual, I immediately understood why the Lidar center is not positioned in the center and that’s because it needed to leave space to easily open the large lid. Under the lid, there’s the dust bin, a recessed Reset button and a WiFi LED (that flashed when the D9 waits to be paired to the app). Yes, this is a curious design choice and a creative way to make cleaning the vacuum cleaner easier, especially since it does not have a self emptying base. I was able to easily detach the transparent plastic case of the bin and, using the provided cleaning tool, I could clean the bin fairly thorough.

I really did not like the way I had to open the dust bin since it felt that I may break it at any moment and I am sure that a lot of people will need to find alternative means to keep the dust bin closed very soon since the two hinges will not hold for very long. On the side of the dust bin, there is a long and narrow HEPA filter that can easily be replaced. You should not take the use of a Lidar sensor very lightly because it’s not yet a standard feature at price tag, even though Xiaomi is strongly pushing towards a more even adoption. It’s worth mentioning that I have tested the Kyvol E20 which lacked the Lidar sensor and it was a pain to watch the little guy vacuuming the same spot 4-5 times. 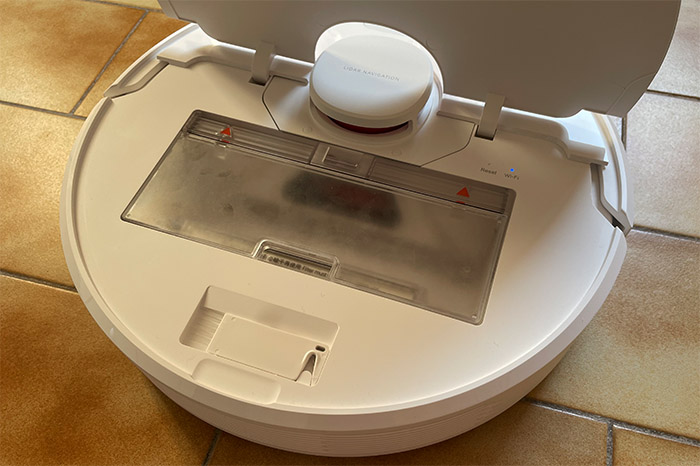 So yes, Dreame D9 does make use of the Lidar tech for navigation and it has an entire suite of IR sensors for keeping it from bumping into stuff, to detect changes in the surface and to prevent the device from falling down the stairs. The first element is the front-facing bumper which, as with pretty much all robot vacuum cleaners, it will help detect the edges of the room without damaging the case of the D9. Within the bumper, there’s a front-facing IR sensor to return the vacuum cleaner to its base and on the sides, there are two other IR sensors for detecting the edges. Turn the Dreame D9 upside down to see the cliff sensors, a pair near the 360-degrees spinning wheel (where you also get the two magnetic pins for charging) and four other near the sides of the robot vacuum cleaner.

The Dreame D9 also makes use of a single side brush which is detachable and in-between the two fairly large retractable wheels, there’s the main brush. The brush is pretty much identical to what I saw on other Xiaomi robot vacuum cleaners, so expect a silicone base with three sets of soft bristles along with some silicone flaps to better get a grip on the dirt. And yes, it’s removable, you just need to detach the cover and take the brush out to clean it. Lastly, there are two pins that can be used to attach the mop assembly. This part is a tad different than what I saw on the Lydsto R1 and the Eve Plus because the water container is built directly into the mop section itself, instead of taking space from the dust bin. This way, the dust bin capacity is far larger than on the Lydsto R1 and the Eve Plus, while the mop water container is also better.

The Dreame D9 robot vacuum cleaner does not have a self-emptying docking station, so, inside the package, there is a small stand that has rubber feet to prevent the stand from moving around the house (this is a good tip for Kyvol E20). The vacuum cleaner will go over the two metallic pins and will start charging, but I noticed that I needed to peel off a transparent cover from the glossy black finish that covers part of the stand. I don’t know why I expected the glossy finish on the docking station to actually be a small display, but it was wishful thinking – it’s for design purposes (and for the IR sensor).

Since we’re essentially dealing with a Xiaomi device, the app that you need to download is called Xiaomi Home and, if you decide to scan the QR code from the user manual, it will know that you’re trying to install the Dreame D9. Which is why it will give you personalized instructions – press the Spot and the Home buttons at the same time until you hear the voice confirming that it’s ready to be connected via WiFi. Afterwards, choose a 2.4GHz network (it’s not compatible with 5GHz) and wait until the app ‘sees’ the Dreame D9 robot vacuum cleaner. Click connect and wait a few seconds until you get the message that the D9 was indeed added to the app. 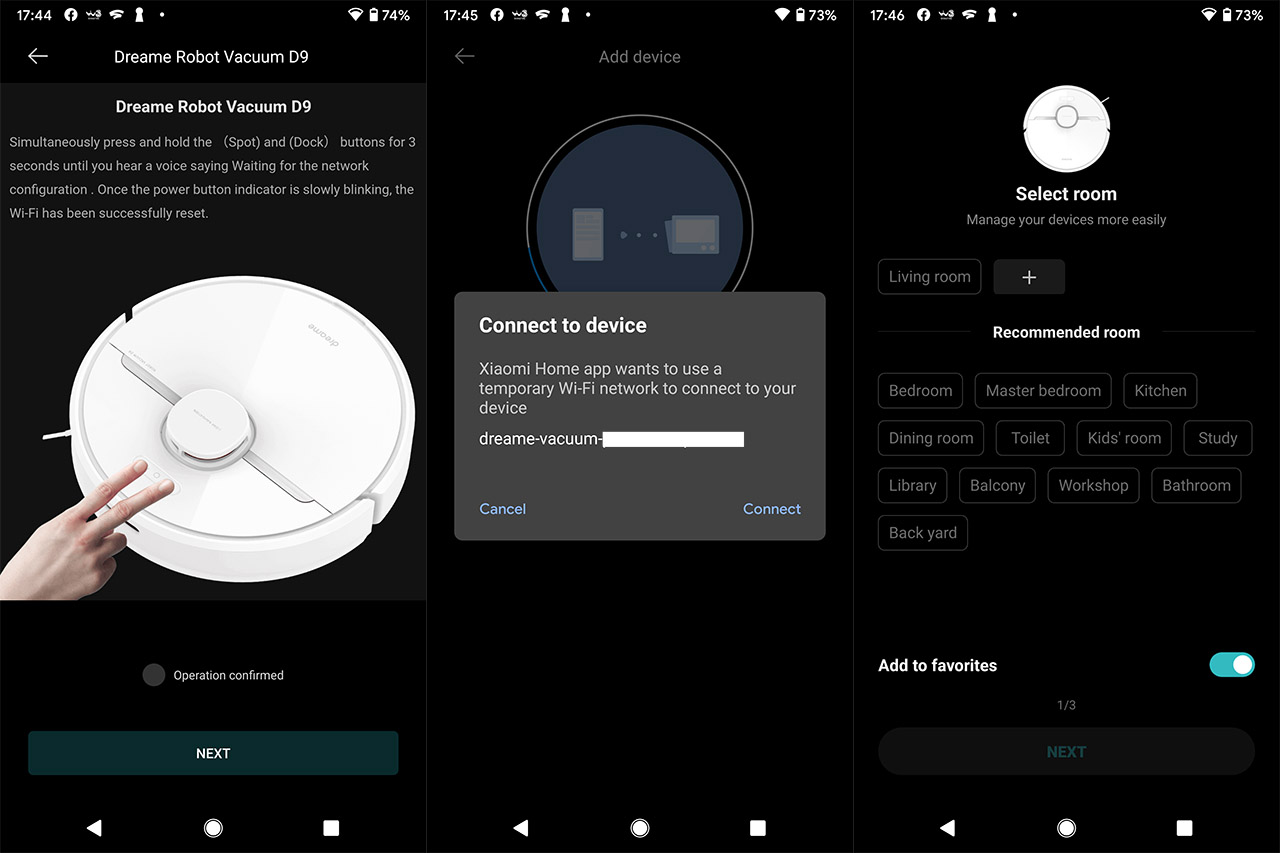 Next, you will have to select the room where the stand will be positioned, choose the name of the device, read and potentially agree to the User Agreement and Privacy Policy (the policies are not that great, but none are nowadays) and then you should gain access to the user interface. Interestingly, I also immediately got a new firmware update available which is always good news with these smart devices.
It’s curious to see that even though I used the same app with the Roidmi Eve Plus, the GUI does look slightly different and I do have access to a few other features and options. I did like that a map of the house was already saved in the D9’s memory even before I paired it to the app (same as on the Eve Plus).

The Functionality and No-go Zones

The main window will display the map of your house, if you have allowed the robot vacuum cleaner to scan it, otherwise tap on Start Cleaning and let the magic happen. Follow the instructions on the display that say you need to remove any small objects since they will be eaten up by the Dreame D9 and it’s best to keep shoe strings or cables out of the way of the vacuum cleaner as well, because these will get tangled in the brush. After you have started the cleaning process, you will be able to see the surface that has been mapped, the amount of time that has passed and the battery life. On the right side of the map, there’s the Map management and the Virtual wall. 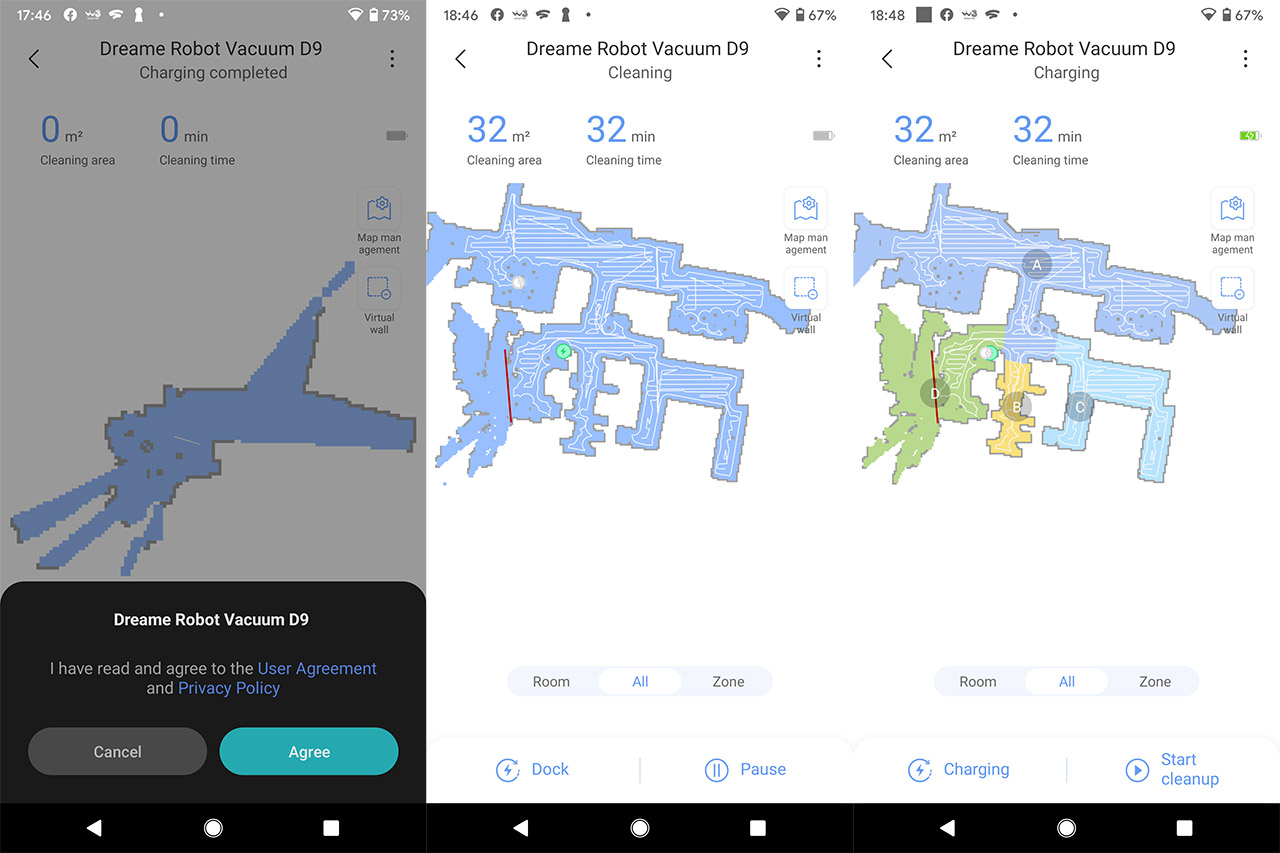 You can use the Virtual wall right away to create no-go zones, even on the first run because the Dreame D9 will pause, immediately receive the updated info and then resume the cleaning process. When the D9 is charging, you get a couple more options, such as the possibility to create a Cleaning Restricted Area and even a Mopping No-Go Zone. This option is not that common on these type of devices (only saw it on the Eve Plus).
The Map management is where you will be able to create multi-floor maps, so, if you have a house with more than one floor, the robot vacuum cleaner won’t mess up the previously saved map. Underneath the map, you can select a Room to be cleaned, view the entire map or create specific cleaning zones. These are the main options, but you do get more if you tap on the three dots from the top right corner. 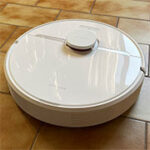