The FS S2800S-8T smart managed L2+ switch is one of the most compact Ethernet switches that I tested so far and, as expected, it was developed to cater to small business networks and even for home use. This proves that FS does also focus on the needs of the users outside the enterprise-level market, but how much value for the money can the FS S2800S-8T actually offer?

Even if it’s called a smart switch, the FS S2800S-8T still seems to support the entire suite of L2+ features that you get with most other FS Ethernet switches that cost below $1,000 (although no L3 features are present). Still, it offers a switching capacity of 16Gbps and a forwarding rate of 11.9Mpps which makes it suitable for small and perhaps even medium (non-demanding) networks. 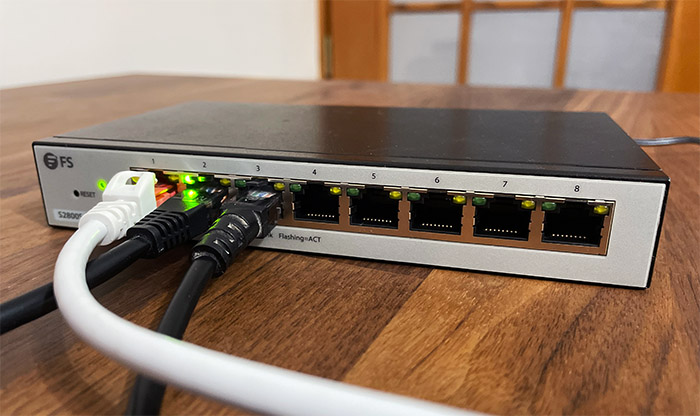 There is also no PoE support, so you can’t power up the wireless access point using only an Ethernet cable and neither will you find any SFP slots for connecting optic fiber modules, but I suppose that was expected considering the price tag of the Ethernet switch. What I am curious though is if the FS S2800S-8T is going to be able to keep a decent internal temperature considering its ultra-compact size and just how well can it handle a crowded network. So, let’s put it to the test and find out.

Like I mentioned in the intro, the FS S2800S-8T is the most compact Ethernet switch that I tested so far and, at its 7.48 x 4.72 x 1.38 inches (19.0 x 12.0 x 3.5 cm), it’s almost pocket size. If only it was a bit narrower, it could even compete with the current flagship smartphones. Due to its size, you’re not going to be able to mount the FS S2800S-8T in a rack, unless you don’t mind using a tray. But you do get the option to mount the Ethernet switch on the wall thanks to the two dedicated holes on the bottom (if only TP-Link had the same idea with the TL-ER7206 gateway).

Obviously, you may as well just leave the device on the desk since it’s not really going to occupy that much space. That being said, the switch is entirely made of metal, it’s rectangular and the sides of the device are covered by lots of punctured holes for the ventilation. Indeed, the FS S2800S-8T is fanless and it does rely on these holes to maintain the internal temperature at a decent level.

As you can see from the thermal photo (taken with the AGM Glory Pro), the Ethernet switch does not overheat and it’s mostly just a bit warm. While the case is covered by a black matte finish, the front is light gray and it’s here where you can find the ports and the LEDs.

From the left, there’s the recessed Reset button (that can be used to return the device to its factory default settings), followed by the PWR LED and the block of eight Gigabit Ethernet ports, each with its own set of LEDs. One shows the link speed at which the connection was made (10/100Mbps – yellow and 1,000Mbps – green) and the other will flash to let you know that there is data transfer on that port. If you turn the FS S2800S-8T around, you’ll see the Power port, followed by the On/Off switch, the grounding screw and the Kensington slot.

That’s pretty much it, so, overall, the FS S2800S-8T is a pretty no-frills Ethernet switch. But I do need to mention that the top cover (made of metal) doesn’t firmly attach to the rest of the case, so there is some light movement especially noticeable if you press your finger on the top of the Ethernet switch.

If you wish to open the FS S2800S-8T, be aware that there is a large Warranty void if broken sticker on the bottom and yes, it’s very easy to tear. If the possibility to losing the warranty doesn’t bother you, then go ahead and remove the two screws from the bottom of the case and then gently slide the top section off, exposing the PCB.

I could immediately see a large heatsink and it does seem that FS used the same glue thermal paste that TP-Link likes to use which is far more difficult to remove than any other solutions. I was still able to detach the heatsink and I could identify the Realtek RTL8380M Gigabit switch controller – I put the heatsink back with some thermal paste commonly used for PC CPUs and I think it works even better for heat transfer (than that glue thing).

Other components that I saw were the 128MB of RAM from Winbond (W631GG8NB-12), a Realtek RTL8231 10/100Mbps Fast Ethernet controller and 16MB of flash storage from Winbond (25Q128JVSQ). So yes, it’s not the best equipped Ethernet switch out there, but let’s not forget the price tag of the device and perhaps FS has done wonders at optimizing it to work just fine with most of its common Ethernet switch features.

So far, I have tested the FS S3150-8T2FP, the FS S3410-10TF-P and the FS S3910-24TF, and all three devices were set in a different subnet that my router with a static IP address. This means that if you want to configure the FS S2800S-8T, you need to power it on and then connect a cable between the switch and a PC. On the next step, it’s necessary to set a static IP address on the aforementioned PC.

If it’s a Windows OS machine, then go to Settings > Network and Internet > Change adapter options and then identify the current Internet connection. Right click it, choose Properties and then double-click Internet Protocol Version 4. Doing so should summon the Properties and you need to select the ‘Use the following IP address’. Just enter any IP address from the subnet of the switch – I chose 192.168.1.2.

Click enter and insert 192.168.1.1 in the URL of a browser to access the FS S2800S-8T GUI. You will be asked to enter the default credentials (admin/admin) and that’s it, you can roam the interface. But we’re not done yet because we need it to get an IP address from the router and the easiest way to accomplish it is by clicking on the Quick Configuration > Basic Setting and then changing the DHCP from Static to Dynamic Acquisition.

We need to do one more important thing and it’s to change the administrator credentials. To do so, go to System Management > System Settings and click on User Management and enter a new password. What’s annoying is that you can’t change the default username, so you’re stuck with admin, which is not that great security-wise. I also did have a look under the Administration tab and it seems to allow the user the possibility to enable SSH, Telnet and HTTPS, but not other configuration options are available.

Since it’s from a different series, the user interface for the FS S2800S-8T is a bit different, even though the layout is very similar. The main menu is vertical on the left and that’s the place where you can check the status of the Ethernet switch or perform some Quick Configurations. I already covered the Basic Setting, but you also have the VLAN and Port Mode available, the latter allowing you to choose between Access, Trunk or Hybrid mode for each individual port.

There is still a dedicated Port Management where you get a more comprehensive set of tools including Statistics and the Flow Trend, the Storm and Flow Control. There is also the possibility to enable Load Balancing via MAC or IP/MAC, configure Port Aggregation, Port Mirroring as well as Port Isolation for IoT devices. It’s also possible to set a bandwidth limit for each port. Under VLAN Management, you can create new VLANs, configure Voice VLANs and Surveillance VLAN – not only does the traffic get separated from the entire network, it also receives a higher priority.

Under Fault/Safety, FS has added a few interesting tools to help investigate any issue that may arise within the network at the switch level. There’s ARP Inspection, DHCP Snooping, CPU Guard, Ping Traceroute and Cable fault detection, the option to automatically disable port on error (for example, from a Broadcast Flood), there’s DDOS Protection, Loopback Detection, Access Control, STP, IGMP and more.

Under System Management, you can upgrade the firmware, import a specific Configuration and I noticed that there is Dual Configuration available which is incredibly useful for restoring a backup config. The last two main settings allow you to configure the QoS (Priority Schedule) and to enable/disable 802.3az EEE which is useful to limit energy use when the port is not connected to an active device.

As with the other FS Ethernet switches that I checked over the years, the manufacturer really did make my life easier by adding some professional tests done with the ixia XGS12 running the ixia’s IxNetwork for 35 minutes in order to check the latency and the throughput. The aggregated graph shows that the average latency is somewhere in the 3,000ns which is pretty much negligible.

The frame loss was constantly zero with the framesize ranging between 64KB and 1,518KB. You can check the more in-depth analysis of the tests on the official web page dedicated to the FS S2800S-8T. I did have a couple of PCs nearby and I thought it wouldn’t hurt to run a quick LAN to LAN test to see if I notice anything strange.

As expected, there was no frame loss and the average client to server throughput was 937Mbps. From the server to the client, I saw an average of 902Mbps, which is excellent. I did try some light stress tests where I connected three PCs (the maximum that I have available) at the same time running iperf and, while there was some spike in the CPU and memory usage, I could still navigate the switch GUI just fine.

Despite the compact and unassuming look of the FS S2800S-8T, it is actually an Ethernet switch that’s slightly overkill for home use and perfectly tailored for small and even some medium businesses. And that’s mostly because the hardware is not incredibly powerful, but the software is efficient enough to handle a larger number of connections.

I would have liked to see support for PoE, but that would have raised the price tag and it would most definitely increase the size of the device. So, if you need a very compact, yet fairly powerful Ethernet switch, then do give the FS S2800S-8T a chance. 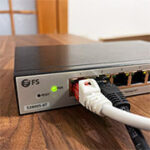