There’s now support for larger smartphones (since the Asian market seems to prefer a larger display), the stabilizing algorithm seems to have been improved, there’s dual Bluetooth, but the battery has been downgraded from the 4000mAh of the iSteady Mobile to 3600mAh. So, while before, you could use the gimbal for up to 12 hours, the new iSteady Mobile Plus loses a bit more than an hour, although it’s still plenty for a day of capturing various footage. At the same time, there’s still the 3-axis stabilization, the easy-to-access controls (the handle is big enough so you easily reach it with your thumb) and the possibility to mount microphones or other accessories. 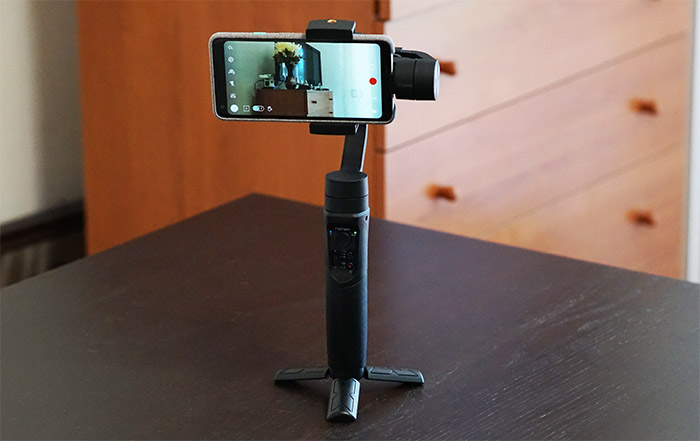 It’s worth mentioning that the software has also been improved over the years, so there should be cooler effects available for your videos. I have already had a look at the Hohem iSteady X and it was a well-designed and very portable gimbal (one of the smallest in its class), so let’s check out the iSteady Mobile Plus to see whether it can improve your videos and possibly help you in a cinematography career.

The Hohem iSteady X had a plastic handle with a metallic piece for the controller, but it was quite small and difficult to maneuver if you wouldn’t use the provided tripod. The iSteady Mobile Plus also has a plastic handle, but it’s almost double the size of the X (only the handle is 6-inch tall). The used plastic is soft with some leather-like texture on the front part (underneath the controller section) and, while I do appreciate that it’s very light, it does feel less premium than on other gimbals, mostly more expensive ones, so it’s not unexpected. At the bottom of the handle, Hohem has added a 1.4-inch extension screw hole that allows you to connect the gimbal to a large tripod or to simply mount the one that’s provided in the box and, while it doesn’t really feel that solid, it does its job really well.

It’s essentially the same tripod that I saw with the iSteady X and, so far, it has endured the trial of time. For now, the Hohem iSteady Mobile Plus seems identical to its predecessor, but on the rear side of the handle we get to see the first new element: the Trigger button.
If you short press this button, it will enable the Sports Mode which will help the gimbal to respond to finer movement, so you don’t miss any quick event that’s happening in front of the camera; double click the button to recenter the smartphone. On the right side of the gimbal, there are four LED indicators, each showing 25% of battery and on the right side, besides the microphone screw hole (you can add other accessories as well), there is a silicone cover which, when removed, it will expose a microUSB charging port and a USB-A port (for keeping a mike alive).

I noticed that the iSteady X had a USB-C port, so Hohem pretty much recycled the ports section from the iSteady Mobile. On the front, there’s the dedicated controls area that’s easily reachable with your thumb, especially the joystick. The joystick reacts fairly fast to the movements, but you need to be decisive for the action to register (if you light press it, it may not move the arms – this behavior can be changed in the app, to make it more reactive). Next to the joystick, there are two LEDs, one for the Bluetooth connection and the other for Mode (it will become red when there’s an abnormal load). There is a Mode button immediately underneath and its role may be a bit confusing at first.

There are some icons next to the button, so one tap means Pan Follow (PF), two taps mean Pan/Tilt Follow (PTF), three taps will enable the All Locked mode (AL) and four taps will enable the All Follow mode (AF). Underneath the Mode button, there’s the Power button which, unlike the iSteady X, where it could switch between vertical and horizontal mode, it has a different role. Press the button once to enable the Camera mode and press is twice to enable the Video Recording mode. On the left side, there’s the T/W switch which allows you to easily set the Zoom level. With the exception of some clamp parts, all the upper part is made out of a metallic alloy and there’s a motor at each joint. Another design element that sets the iSteady Mobile Plus apart from its predecessor is the retractable roll arm which has a lock button which needs to be adjusted depending on the type of smartphone you’re using.

The clamp has rubber pieces to not scratch your smartphone and I did notice that this is one of the few gimbals that doesn’t push on the volume controller of my Pixel phone – it still covers the bottom-placed USB port though.

This negates the possibility to connect a mike directly to the phone, but there’s a screw hole on one side of the clamp, so you can use it for connecting a microphone, right? Technically yes, but since most microphones are heavy, it will not work great with the stabilizing motors, so it’s a no. One other negative would be that the arms can’t be locked into place for transport, so they’re going to move around in your bag (and it’s a bit strange considering that the iSteady X excels at this chapter). A solution would be to rely on the provided case which should ensure that the gimbal stays put.

Setting up the Hohem iSteady Mobile Plus is dead simple and the application is different than the one I used with the iSteady X. The first thing that you need to do is install the Hohem Gimbal app on either an iPhone or an Android device, then attach the phone to the clamp and press the Power button on the gimbal (I could insert a Pixel 2 Xl along with its cover). The app should detect the iSteady Mobile Plus and you should be able to use the camera app to your liking – this is the entire process. I used the Hohem app with a Pixel phone and it has a somewhat similar look and feel to the native app, but there are obviously different types of options and features available. 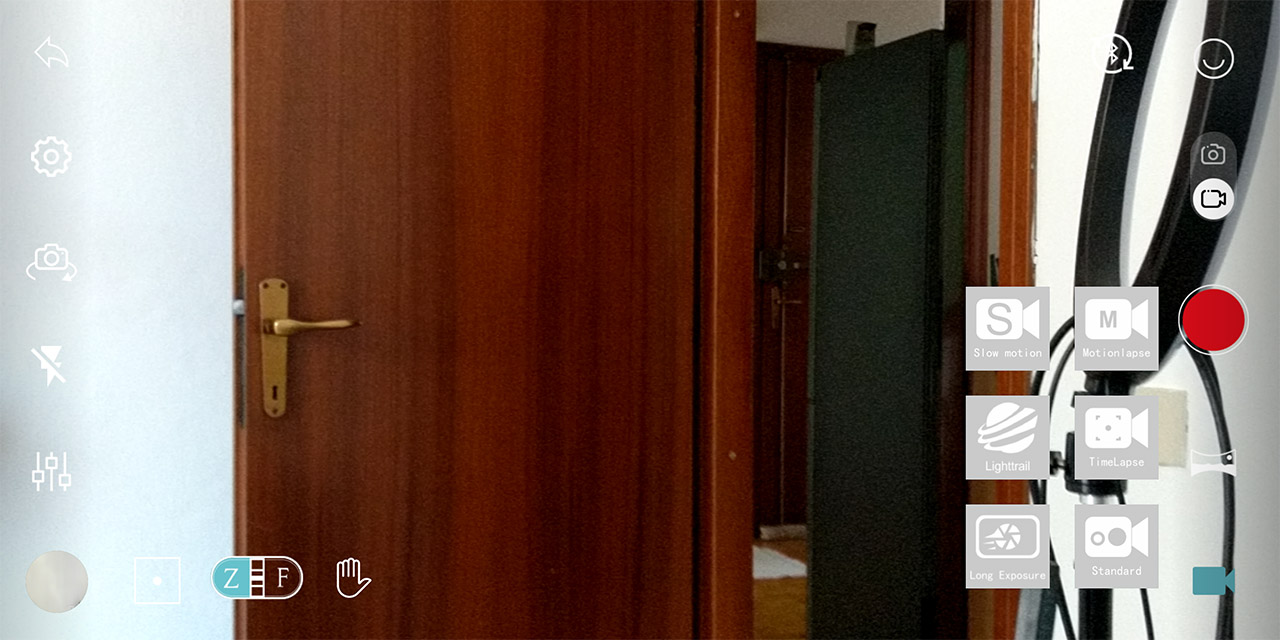 The first thing that caught my eye was the Z/F functionality that you can adjust using the physical switch and then there are all these gestures available, such as the Gesture Control or the Smile Detection. After turning on the Timer from the camera Settings, the Gesture Control allows you to either start recording or capture a photo (depending on the currently enabled mode) by showing either the high five sign or the peace sign to the camera – your face also needs to be in the shot or it won’t work.

You can also adjust the EV, ISO and the White Balance clicking on the bottom left icon, but the big set of options can be found by tapping on the cogwheel icon. Here, you can adjust the Camera Settings which include the Resolution (can go up to 4K, 30FPS), whether there would be a Shutter sound, enable the Video stabilization, enable the Bluetooth microphone (if you have connected one), set the Zoom speed and a lot more. Next, there’s the Gimbal Settings where you can essentially configure in depth the way the stabilization will work (includes the Follow Speed, the Joystick Speed, TRIM, Follow Dead Area, the Motors Torsion and more), the option to add a Watermark, the possibility to Calibrate the gimbal and more. You also get the option to upgrade the Firmware. Returning to the main camera app window, on the bottom right side, there is the Panoramic icon, where the gimbal will either automatically create a 180 degrees or a 360 degrees panoramic shot. 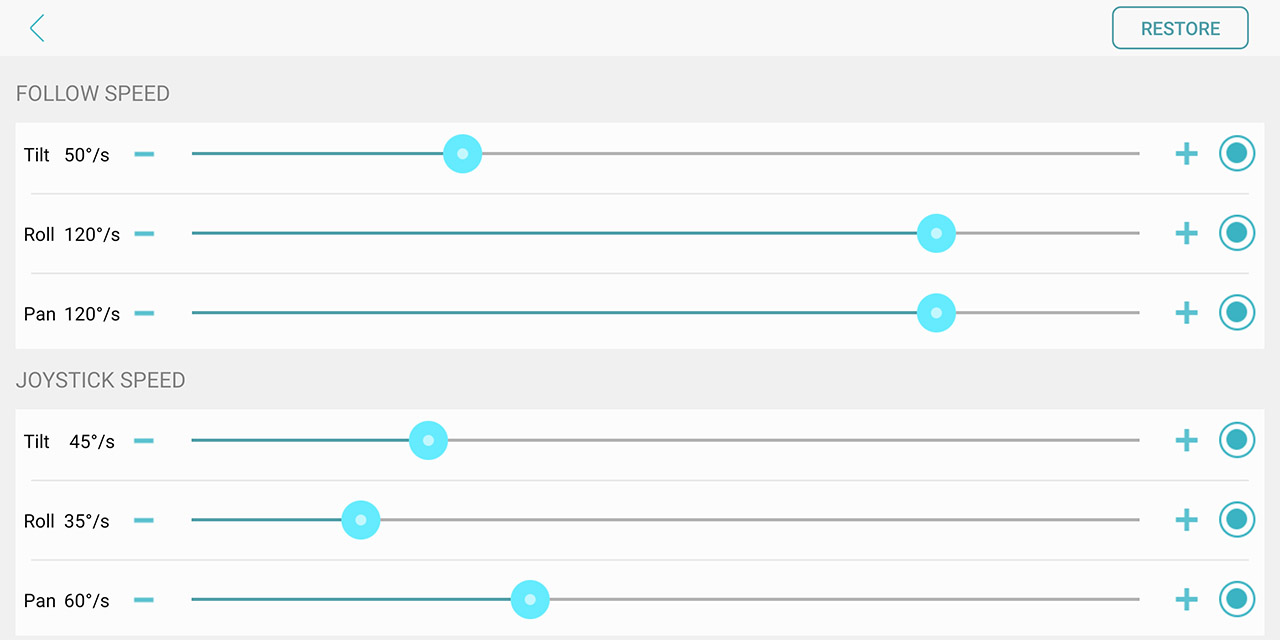 There is also a wand icon for adding some basic filters and one of the most interesting sections is the video modes (the recording camera icon). There are six modes available and each creates a unique type of movement.

You can film a Slow motion video, there’s also Motionlapse and Timelapse, Long Exposure and Lighttrail (as well as the Standard mode) – you don’t need to do anything special, just enable the mode, and let the gimbal do all the work. I have added a video to showcase the difference between filming with a smartphone that already has some image stabilization technology built in and when using the gimbal. As you can see, the movements feel ampler and far smoother using the gimbal, so there is a noticeable improvement even though I did try my best to keep my hand steady when filming just with my phone.

Note: I have also tested the object tracking feature and it seems to work even better than when I tested it on the iSteady X – as long as the object is in the frame, the gimbal will move after it even if you make sudden moves. Furthermore, even if you take the object out of the frame, as soon as you add it back, the tracking will resume.

How to mount it vertically?

When I used the Hohem iSteady X, switching between the horizontal and the vertical view was a breeze (just press the Power button), but things are more complicated with the iSteady Mobile Plus. And that’s because you need to physically adjust the arm and move the clamp, so it’s not only done in software. To be more specific, you need to move the clamp 90 degrees and, using the Lock button, make sure to retract the roll arm. Then simply slide the smartphone into the clamp and press the Power button – at this point, the gimbal should successfully balance the device.

The Hohem iSteady Mobile Plus is not really a huge leap from its predecessor and the focus is mostly geared towards balancing larger phones. So, besides the adjustable roll arm and the Trigger button, you will get a very similar experience to the original iSteady Mobile. Whether that’s good or bad, it’s up to you to decide, but while using the gimbal, it did properly stabilize my smartphone and I did like some of the preset modes from the app. Furthermore, I appreciate the microphone mounting holes and the fact that it’s incredibly easy to pair the iSteady Mobile Plus to a phone. There are clearly some aspects that could have been improved, such as replacing the microUSB port (with a type-C) or adding some locks for the arms, but the video experience doesn’t differ that much from the more expensive gimbals, so, for its current price, it’s definitely worth taking into consideration. 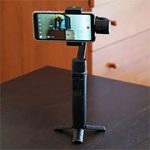