The app will now require the WiFi credentials (2.4GHz-only) and, after joining the network, the Binding was successful. The app will ask that you charge up the Imilab video doorbell up to 100% and then to select the way the device reacts to movement (to record immediately, after a set time or not at all).

After reaching the user interface, I was greeted by the possibility to get 3 months of free storage in the Cloud which I politely declined and I realized the first downside. The main page will not show anything that’s stored on the microSD card, you will have to access that area from settings, every time. That’s Imilab’s choice which is their right to have, but I don’t like it

The other interesting thing was that when opening the app, I would sometimes get an ad that I had to wait for a few seconds until I could skip it. That YouTube worm got into Imilab brains as well. Again, there are alternatives to this doorbell if this behavior annoys you (as it should), but I am concerned about this very problematic trend where you buy a product and still have to watch ads to get the full experience. And the cherry on top? Well, it needs continuous Internet connection regardless of whether you use the Cloud or not.

I am really not a fan of this app. In any case, let’s talk about what it does offer. As I already mentioned, since I didn’t use the Cloud. The main page with the Events is barren, but, after switching to Live (from the bottom), I could stream the video directly from the camera. There are also a few quick action buttons that allow you to capture a photo of the screen or even record a video.
And there is also the option to change the video quality from Standard Definition to 2.5K. A bit lower, there are two other icons, one for speaking with the person in front of the doorbell and the other for sounding the alarm.

What I wanted to see was a way to quickly speak with the person when a notification arrives – like a sort of messaging app calling. And Imilab does deliver in this regard because as soon as the person presses on the button, you do get a call from the doorbell. There are also a few settings that you can explore by tapping on the Cogwheel icon.

And you should be able to change the Doorbell settings which include the ring sound, enabling the DND mode or the Lens distortion correction (for a better, but narrower view). Under Home monitoring, you can create schedules for when the Imilab video doorbell will film, choose the clip interval, the detection sensitivity and you can also draw zones on the video that will trigger the alarm.

The next section is the SD card video which should be on the main page, but it’s not – it contains the videos captured on the card when motion is detected. You can also run a Signal test to make sure you’re not too far from the hub and, from under General Settings, it’s possible to update the firmware.

The Imilab video doorbell uses a 4-megapixel camera that can film at a resolution of 2560 x 1440 pixels (the lens has an F1.6 aperture and the sensor size is 1/3″). To check the video quality, I opened the live view on the doorbell camera during the day and I also moved in front of it to see if I get any notification. The alert came on my phone quickly and, as you can see, the image quality is actually pretty good, on par with what a lot of battery-powered cameras can deliver.

I mean, it’s not that much of a difference to what the Reolink Argus 3 Pro can deliver. There is a good amount of detail, you should be able to see the person’s face very clearly and yes, there is some amount of lens distortion. But I think that Imilab shouldn’t have added the option to correct it at all since it’s very mild and almost unnoticeable. I saw that while I was moving, there was almost no delay and I could see myself in the app in real time. That’s due to the signal boosting hub.

During the night, I know that a lot of smart doorbells struggle, especially the budget-friendly ones, so how did the Imilab video doorbell fare? Thanks to its eight IR LEDs, it handled itself admirably. As you can see from the video, it’s a very clean image, the details are all there, the person walking up the stairs was easily identifiable and the notification arrived quickly.
Also, bear in mind that there is only a light pole in the vicinity that shines on the street and no other light source. So yes, overall, the Imilab video doorbell is able to deliver a good image quality during both the day and during the night.

How quickly do the notifications arrive?

Imilab has put out numbers such as 0.01 seconds which is maybe how quickly the hub and the doorbell communicate, but the smartphone and the router will add quite a bit of seconds to that due to overhead.

The numbers that I observed were about 2-3 seconds after the motion sensor detected movement which is still very good. And, as for pushing the button, the smartphone screen lit up to display the call in about a second. These numbers are available inside my home network, so, when you’re on the LTE/4G/3G networks, things can be very much different.

Then again, if the signal is decent, you should only see a slight delay, like a second or two more. As for the motion detection, it’s very good. It detects movement from the front and the side and, as I already mentioned, the notification gets to me way before the person gets to press the button on the doorbell.

The Imilab video doorbell has a 5,000mAh battery which, technically, it can’t be removed, but, if you’re willing to open up the device, it’s possible to change it if it’s no longer working as intended. The manufacturer says that this battery should last for 6 months on a single charge and I haven’t tested it for that much to give a definitive number, but the last week of testing, the battery only dropped a couple of percentages. And that’s only because I had to constantly check the live footage.

I don’t think 6 months is actually reachable if I put the doorbell on my front door and that’s because there is so much movement which equate to constant recordings. But, if the Imilab video doorbell points at a wall, where it will capture only the people that get close to your door, I guess it’s doable.

I do think that Imilab’s entrance into the smart doorbell market has been successful and, while I don’t think they needed support from Kickstarter, it’s a marketing strategy that definitely works. The device itself is well built, the video quality is excellent during the day and during the night and the idea to boost the signal through the hub worked. Because I did see fast notifications on my phone. Not everything is perfect though, since the app is incredibly annoying.

And I am not complaining about the functions or about the interface itself. They’re great. I am complaining about the required Internet connection, the ads and the hidden events from the local storage in favor of the Cloud ones. I get it, they need to make a profit, but these can be done a bit different and quite easily can greatly improve the user experience. 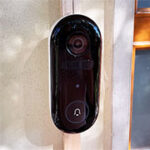