The Kospet Tank M1 is an inexpensive rugged smartwatch that was created for the people that work in harsh environments and value both a long-lasting battery life and their budget. The people that regularly practice outdoor sports can also make use of this rugged smartwatch, but be aware that the fitness tracking aspect is fairly entry-level.

The Tank M1 is actually the second rugged smartwatch that the manufacturer has developed, the first being the Kospet Rock and they do share some similarities in terms of design. The proprietary software is going to be pretty much identical as well, but the battery is a bit bigger and the display is both larger and of a higher resolution. The shell is way more rugged than the Kospet Rock, now having the 5ATM and IP69K rating, and it also seems to have passed some military standard tests. 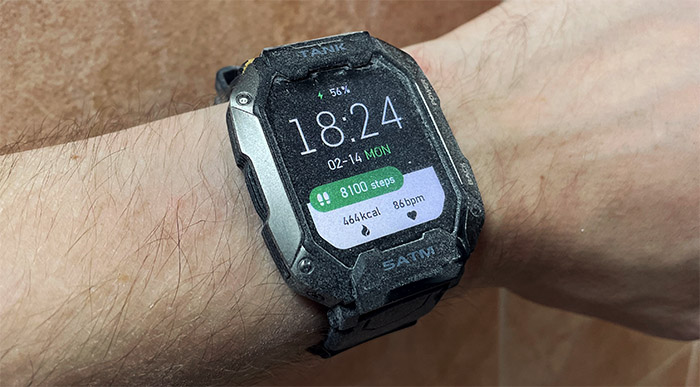 Additionally, I noticed that the Kospet M1 Tank can measure the Blood Pressure, besides the usual heart rate sensor and the blood Oxygen monitor which is an unusual addition for any smartwatch, let alone an inexpensive one. I have my doubts about the Blood Pressure accuracy, but I will be putting it to the test to make sure. I had a lot of fun testing the Kospet Optimus 2, a smartwatch that ran a full Android version and, while the Tank M1 has a different type of software (far simpler), a rugged smartwatch has an audience of its own, so let’s put it to the test and see if it’s worth wearing everyday.

I have checked a few rugged smartwatches over the years (I even have a guide for which is currently the best) and, while the Kospet Tank M1 is definitely not the most compact, neither the thinnest device out there, it still has a very decent size considering its ruggedness. Indeed, at 2.0 x 1.8 x 0.3 inches (5.0 x 4.5 x 0.8 cm), the smartwatch is not small, but it still didn’t look that big on my thin wrist. And considering that the manufacturer went for a rectangular design instead of the circular case, imagine the Kospet Tank M1 as a sort of beefed up Apple Watch. The rugged smartwatch is made entirely of tough plastic and I didn’t really expect any metal considering the price tag, but this also means that the device is very light and should sit comfortably on your wrist. 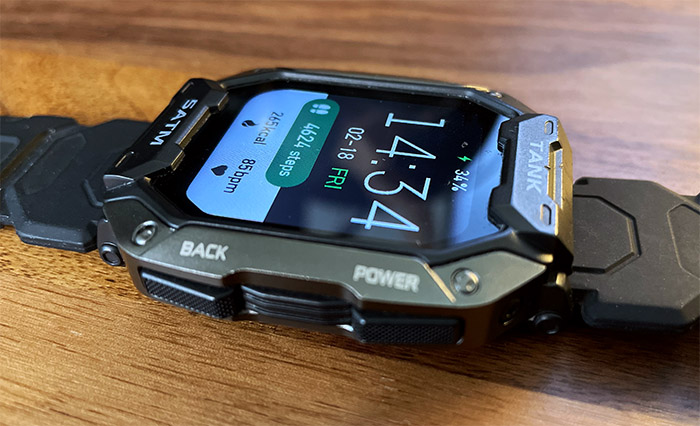 And it does, since at less than 2 ounces (approx 55 grams), I could barely feel that it was on my wrist. The manufacturer did try its best to make the watch look closer to its more expensive competitors, so the frame is covered by a faux metal finish and it’s held by four screws to give it a more industrial design. At the top and the bottom of the display, Kospet added thicker areas where it’s written Tank and 5ATM which I found a bit tacky and I am sure most people would prefer either something more subtle or no logo at all on the front of the smartwatch. I did notice that the frame rises up quite a bit above the screen which does help a lot in case you often bump the Kospet Tank M1 into objects.

On the right side of the rectangular case, there are two buttons, one is called Power and you can use it to both power up/down the device and to enable the display. The second button is called Back and besides the obvious function, it also opens the menu in the watch UI. The buttons have a faint texture on them and they’re fairly easy to press. The smartwatch comes with a black silicone strap already installed and the locking mechanism is the universal one (which can easily be detached by operating a small spring using a metallic switch). Inside the package, I saw that there was an additional set of straps which are also made of silicone, but it has a camouflage pattern on it. I prefer the black one, but it’s nice to have a spare set of straps available. 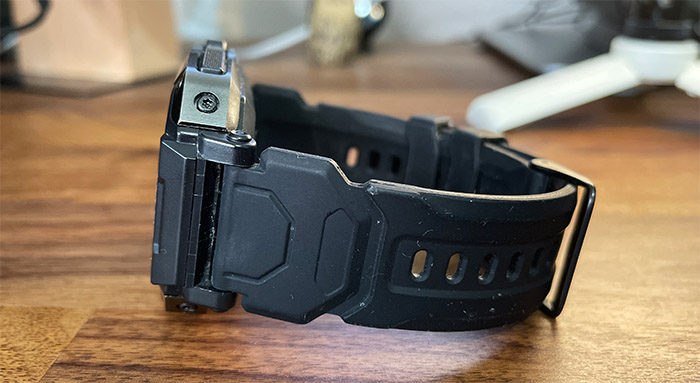 If you flip the smartwatch upside down, you can see the sensors grouped in the middle within a glossy section and what I really liked is that it doesn’t push on the wrist, as other smartwatches do (the bump is less pronounced). There is a Heart rate sensor (HRS3690) and a Pedometer sensor (SC7A20) which should detect how many steps you make. Additionally, the smartwatch has the ability to detect the amount of Oxygen in your Blood and the Blood Pressure. This last feature is a bit strange because it doesn’t require calibration and it essentially uses the HR sensor to estimate (or more like guess) the blood pressure. So I would not use it as an alternative to the proper equipment for measuring the BP.

How rugged is the Kospet Tank M1?

You have every right to be skeptical about whether an inexpensive smartwatch can actually be properly rugged, so, besides checking out the rating and certifications that Kospet advertises on their website, I also put the device to the test. Fortunately, I got the Kospet Tank M1 while I was renovating my kitchen, so I could get a fairly accurate idea on whether it will survive in dusty and harsh environments. Before that, I do need to mention that the device is IP69K rated which means that it is completely sealed from dust. 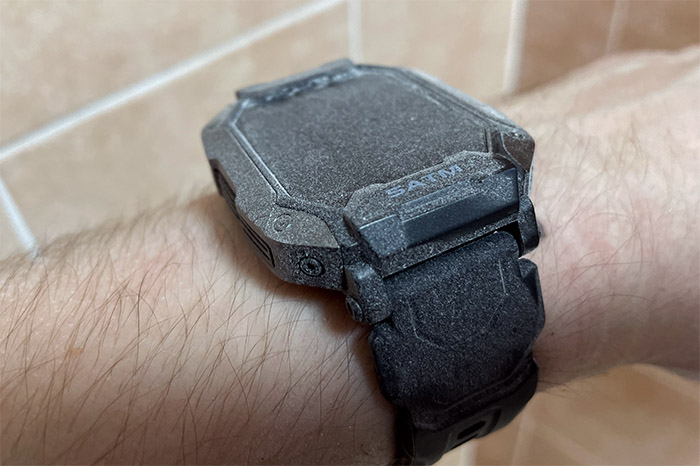 It also means that the smartwatch will survive powerful jets of water (so it’s pretty much waterproof) and that it can withstand a high temperature. Kospet adds the fact that the rugged device can withstand 5ATM of pressure, so you should be able to submerge under water down to 164 feet (or 50 meters) and the watch should survive. Obviously, don’t use the Kospet Tank M1 as an alternative to professional gear that can save your life at that depth, but it’s nice to know that we are dealing with a powerful device nevertheless. Additionally, the manufacturer says that it ran some military grade tests (it doesn’t seem to be specific about the MIL-STD certification) and that the rugged smartwatch survived salt spray test of up to 96 hours, 8 hours of fluid contamination and that it will remain operational when the temperature ranges between -40 to 158 degrees F (-40 and 70 degrees C).

Now, as I already mentioned, I did use the Kospet Tank M1 while I was removing the old tiles in my kitchen, so there was lots of dust, I did bump the smartwatch several times into various surfaces and it has survived in good conditions. No dust was able to enter the enclosure, but those bumps have showed some interesting aspects. The protective lip around the screen works really well and its height is excellent, but at some point, I did manage to slide a metallic rod directly into the screen. And, of course, there was a scratch. The good news is that only the pre-applied protective screen got scratched, while the display itself survived unscathed. I really liked that Kospet put a spare in the package and it highlights the importance of these protective screens especially on rugged smartwatches.

The Internal Hardware and Connectivity

Kospet has disclosed that the Tank M1 rugged smartwatch uses a RealTek 8762DK CPU which is a low-power efficient chip and not really built for high-demand applications. 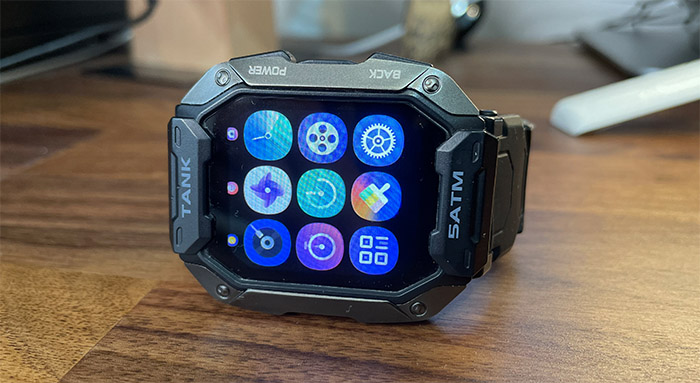 As you may have already guessed, the Kospet Tank M1 is not going to let you install any third-party apps, it just runs a lightweight software that I have seen on other inexpensive smartwatches, with just some minor tweaks. Besides the Realtek CPU, the Tank M1 is also equipped with 64KB of RAM and 128MB of flash memory, just enough to keep the software experience fairly fluid and to allow the text message and some other minor data storage to take place at the smartwatch level. In terms of connectivity, the Kospet Tank M1 uses Bluetooth v5.0 which is excellent for coverage – it can reach up to 30 feet if there are a few walls in between the phone and the smartwatch.

It’s obvious that the device will also function without the connection to the smartphone, but it will lack any long-term data and you won’t be able to play music, view messages and all the other good stuff that you can get from a smartwatch. 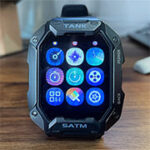