The Linksys LAPAC1750C and the Ubiquiti UniFi UAP-AC-PRO are two AC1750 wireless access points that can be integrated within a controller (Cloud based or offline), offering an easy deployment of multiple devices on various sites. The Ubiquiti UAP-AC-PRO has been a long time favourite in the networking community and for good reason, since it can still maintain a stable network and deliver a good wireless performance, but, of course, its advantage over the other access points remains the UniFi controller which has matured so much that it may soon be able to compete with some enterprise-level solutions.
The LAPAC series has also been around for quite some time, but the LAPAC1750C has just recently been released as one of the first wireless access points to support the Linksys Cloud Manager, but, while the software is new, the hardware isn’t and the LAPAC1750C is identical to the good ol’LAPAC1750. 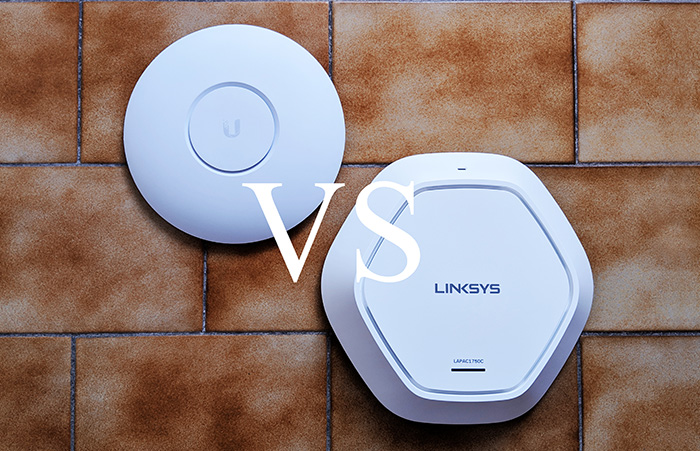 The aim of the Linksys Cloud controller is to ‘disrupt’ the SMB market and to become one of the main go-to options on the market, next to Ubiquiti’s UniFi and, considering that Linksys has made its software free for 5 years, while Ubiquiti has been jacking up its prices recently, it may have a chance to catch up. Of course, the Linksys Cloud controller is still in its infancy, but I still think that it will be interesting to see how does it fare even in this stage against the UniFi, so let’s see which of the two access points (Linksys LAPAC1750C or the Ubiquiti Unifi UAP-AC-PRO) is the better device at this point (I will update the article over the years to reflect the changes that may occur from either manufacturers).

Design
Despite having their main aim at the small and medium businesses, both the Linksys LAPAC1750C and the Ubiquiti Unifi UAP-AC-PRO do also cater to the consumer market, so the design approach can matter. Thankfully, both went with that Applesque look, so the devices have simple, minimalist cases and are covered by a white finish in order to be as unobtrusive as possible and to easily blend in with the rest of the room (these access points will most likely end up on the ceiling, so this design approach is the most suitable one). 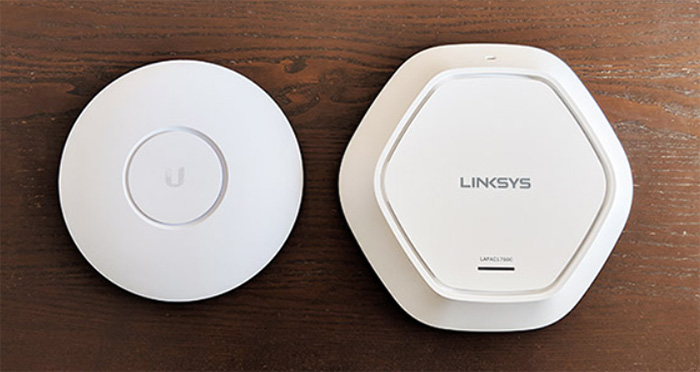 The case of the Ubiquiti UAP-AC-PRO is circular (closely resembling a flush mount) and it has a narrow canal on its top surface to let the single LED indicator shine through which gives it a nice effect, especially during the night. Furthermore, the access point is one of the most compact among its peers, measuring 7.74 x 7.74 x 1.38 inches, but Ubiquiti has used quality materials, so despite also being quite lightweight (weighs 0.77 lbs), it still feels like a premium device.

The Linksys LAPAC1750C is significantly larger than the Ubiquiti UAP-AC-PRO, measuring 9.57 x 9.33 x 1.72 inches (it’s actually larger than the more industrial-focused Zyxel NWA1123-AC HD) and I assume the reason for it is because the manufacturer has added the possibility to power on the LAPAC1750C using a regular cable, while the UAP-AC-PRO is a PoE-only device. Despite having almost double the width of the UAP-AC-PRO, the LAPAC1750C is still reasonably stealthy, adopting a hexagonal-shaped case (that also resembles a flush-mount light) and, on the top surface, it has a narrow canal which hides some ventilation cut-outs. Unlike the flashy LED from the Ubiquiti AP, Linksys went with something more subtle, so it simply added a small LED indicator on the top directly underneath the logo. On the bottom side, the LAPAC1750C is covered by lots of ventilation holes and I also noticed four small silicone feet to keep the device steady in case the user decided to keep it on a flat surface. This is an interesting addition since both devices are ceiling access points, so both come with the necessary hardware inside the package (mounting brackets, screws, etcetera). 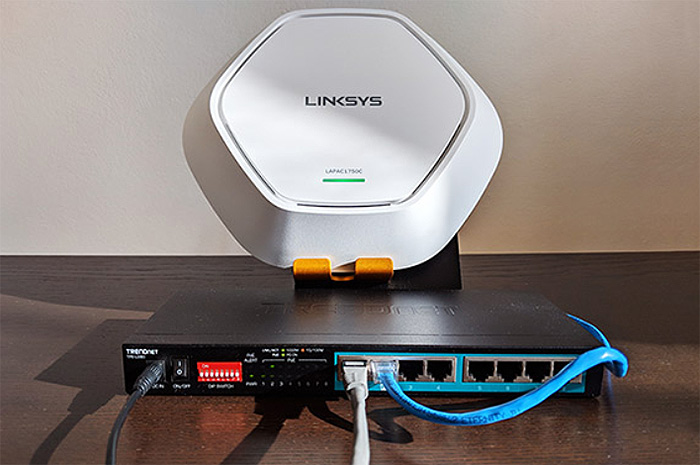 The Ubiquiti UAP-AC-PRO lacks any silicone feet on its bottom area, so it’s not a desk-friendly solution (ceiling or wall mounting is the way to go) and I also noticed that there are no ventilation cut-outs anywhere around the case. The reason for this is because the manufacturer decided to make the UAP-AC-PRO outdoor-suitable, so it had to completely seal up the access point (including the ports area which is protected by a silicone cover that is surprisingly hard to remove). But, this also means that the heat management isn’t the best and while I was testing the device, it did get warm to hot on the bottom side, near the label (this doesn’t seem to have any impact on the performance, so far). The Linksys LAPAC1750C is an indoors device and all those ventilation areas do allow for a proper heat management, which means that the device barely got warm even when put under stress.

Returning to the top of the access points, both devices have opted for a single LED indicator to take the place of the traditional array of LED lights and, considering that the manufacturers can no longer rely on the small icons, they had to use various colours and flashing patterns to let the user know what’s going on with their network (which is not really the most intuitive way of doing things). 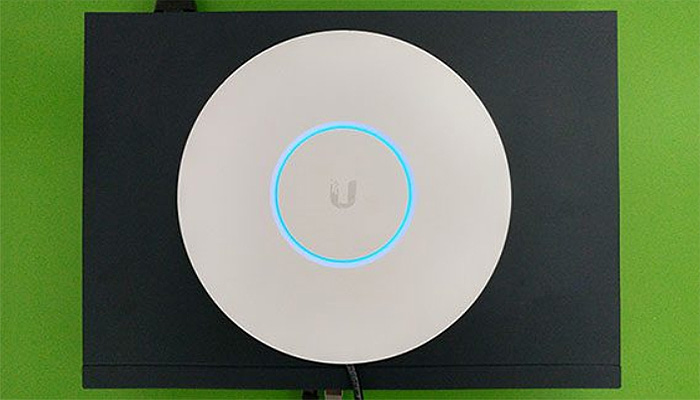 That being said, the LED indicator from the Ubiquiti UAP-AC-PRO will be solid blue when the AP is powered and everything is fine with the network, otherwise, if the LED is flashing white fast, then the access point has encountered an error; furthermore, a solid white LED indicates that the device is ready to be configured. The single LED on the Linksys LAPAC1750C will be solid green when the device is powered on, but no wireless device is yet connected, while a solid blue indicates that wireless clients are now connected to the network; if the LED indicator turns solid red, then either the access point failed to start or a software update has failed (and you should try a hard reset or contact support).

Turning the LAPAC1750C upside down will reveal the ports area which is positioned towards the upper side (unlike the other APs): from the left, there’s a 12VDC power port, a single Ethernet Gigabit PoE port (802.3at – features a maximum power consumption of 15W) and a small Reset button. The ports area on the Ubiquiti UAP-AC-PRO is hidden by a protective cover which, when removed, will expose the Main Ethernet Gigabit port (used to connect the AP to a switch or PoE adapter and it supports 802.3at PoE – needs about 9W), a Reset button, a USB 2.0 port (to connect the access point to a PA system) and a Secondary Ethernet port to either connect the device to wired clients or to other UAP devices. 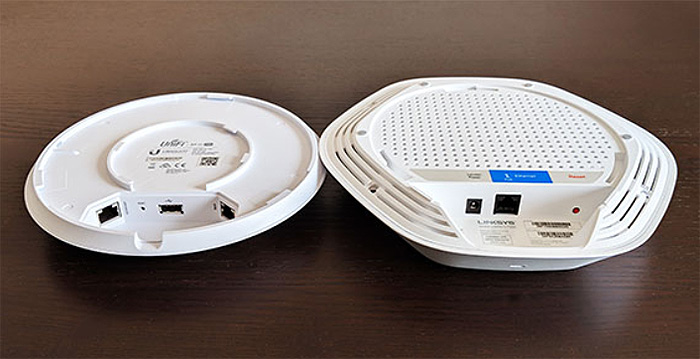 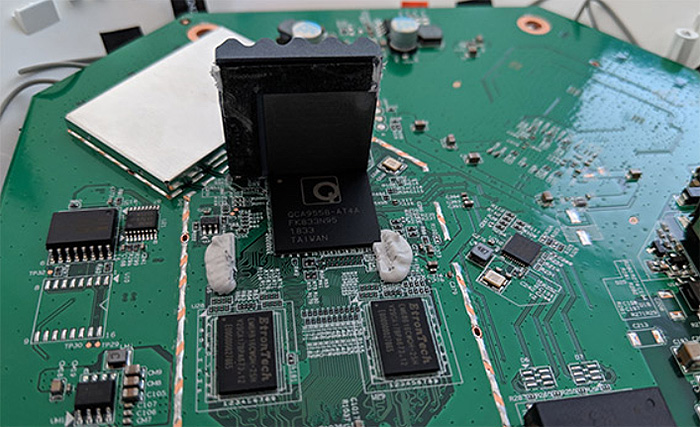 Verdict: There isn’t a huge difference between the Qualcomm Atheros QCA9558 and the QCA9563, both chips being a perfect fit for an access point, but I have to acknowledge the small advantage of the Ubiquiti UAP-AC-PRO over the Linksys LAPAC1750C, so the former wins this round.

Features and Performance
Considering that both devices have been built around the same time (yes, the LAPAC1750C despite being newly released, it’s the same as the five year old LAPAC1750), it is to be expected to have a similar set of wireless performance enhancing features. Well, this not entirely true since Linksys kept a pretty basic set of additional features (no MU-MIMO or mesh support, but it does take advantage of the 802.11k roaming), while Ubiquiti has implemented its own take on the mesh technology in the form of Wireless Uplink which doesn’t really differ from how other manufacturers have implemented it on their WiFi mesh systems (such as Google WiFi, Netgear Orbi or Eero 1st or second gen). 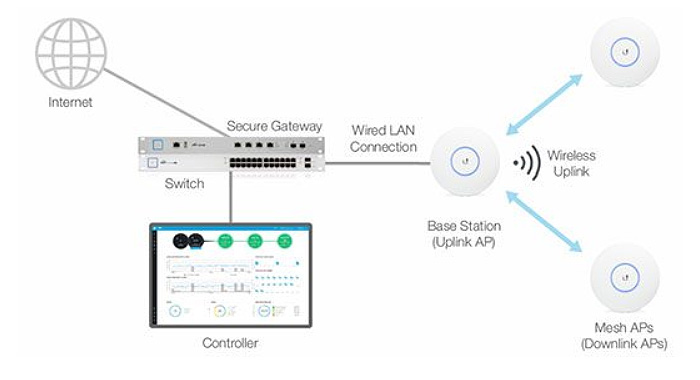 So, if you have multiple compatible Ubiquiti wireless access points, you’ll be able to use one AP as the main node and up to four other devices as secondary nodes, so the data can flow through optimized paths instead of being forced to go through a predetermined AP; furthermore, in case a mesh node (an access point) goes offline, any other suitable AP will take the data and ensure it reaches its destination. Besides the Wireless Uplink feature, the UAP-AC-PRO also comes with Fast Roaming which is a similar technology to the Fast BSS Transition (used by the LAPAC1750C), but it is adapted so it can be used by all clients and not only by those that have compatible hardware.