As expected, you can change everything about how the wireless networks will function, but the first thing that you need to do is to set the security aspect of the SSID, since, by default, it’s left open. To do so, you need to create a new Security profile (click on Wireless and select Security Profiles from the top) and then choose a name and enter a WPA2 Pre-Shared key; after that’s done click apply and head back to the settings of the WLAN and under Security Profile, choose the new profile that you just created. You can also select the Mode (I left it as ap bridge), the Band (select the appropriate bands for each SSID), the channel width and the frequency. It’s also very important to set the correct country and the suitable antenna gain, so that you don’t transmit at frequencies that are outside the regulations. Returning to the WiFi Interfaces section, I noticed that Mikrotik has made available as few useful utilities, such as the Scanner (scans the area for nearby networks, so you know which channels to avoid), the Frequency Usage, the Alignment, the Wireless Sniffer (great tool to check data packets for any issues) and the Wireless Snooper (shows even more data than the Scanner tool).

The Interfaces is another section of interest since it shows the status of your interfaces (such as the live packet transmission) and, since this is a Mikrotik access point, yes, you can add new interfaces or adjust every aspect of the existing ones. The RouterOS will allow you to create EoIP, IP or GRE Tunnels, add a VLAN or adjust the LTE connection (if you added a SIM card) and yes, there’s also link aggregation available (Bonding), useful if you have more than one link available.The Mikrotik NetMetal ac2 can also be added to a mesh network and, as expected, it’s best to have two wireless interfaces available, so one can be used for the client connection and the other for the inter-AP communication. This is a very brief overview of some of the available options using the RouterOS, but, as I said before, there is an insane amount of options and customization available (I barely scratched the surface), you just need to know exactly what you’re trying to accomplish since the software really doesn’t like holding your hand.

Since we’re in 2020 and (apparently) everything needs to have an application, Mikrotik has also made available a proprietary app which is surprisingly helpful, especially for newcomers. After opening the app, you will have to know the IP address of the access point and, if you already configured an admin account on the web-based RouterOS GUI, you will need to enter those credentials here as well. The first page is going to show the status of the device, the network and the connection; there’s also going to be a link to start the Quick Setup which is far more intuitive than on the web-based UI (there are proper steps for setting the Internet access, the local network, the wireless networks and the administrator account). 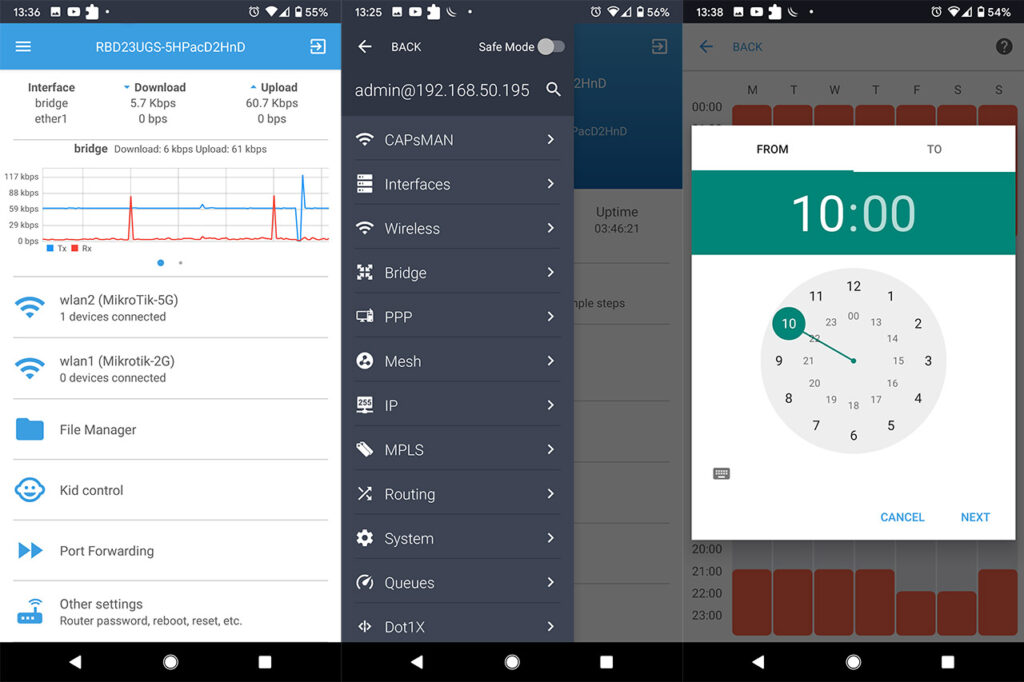 Further down, you can configure the wlan1 and wlan2 (you can also see the connected Clients), as well as adjust the Kid Control options – more specifically, you can set a specific schedule for when the Internet access is allowed for certain profiles. The app will allow you to configure the Port Forwarding, check the File Manager, Reboot, Shutdown the access point, reset the configuration and more.
Besides these fairly basic options, you can swipe right to open the main menu which seems to contain the entire RouterOS features from the web-based GUI and yes, they’re all well laid out and easy to access.

The Mikrotik NetMetal ac2 does not come with antennas so you will have to purchase a couple of high-gain ones to get the best performance. Unfortunately, I only had a couple of 5dBi antennas available at the moment of testing, but they should be enough to give you a rough idea about what you need to expect from this access point when you’re trying to connect some regular WiFi clients. For some other applications (such as PtP), a dedicated powerful antenna is necessary to reach miles of coverage. First, I decided to test the wireless performance indoors using a client equipped with an Asus PCE-AC88 adapter – another computer worked as the server and it was connected to an Ethernet switch via cable (the NetMetal ac2 was also connected to the switch: a TPE-LG80). That being said, I connected the client device to the 5GHz network (802.11ac) and from the client to the server, at 5 feet, I measured an average of 330 Mbps; at 15 feet, the throughput went down to an average of 315 Mbps and at 30 feet, I measured an average of 105 Mbps. From the server to the client, I got an average of 224 Mbps at 5 feet and an average of 223Mbps at 15 feet; at 30 feet, the speed decreased to 132 Mbps. 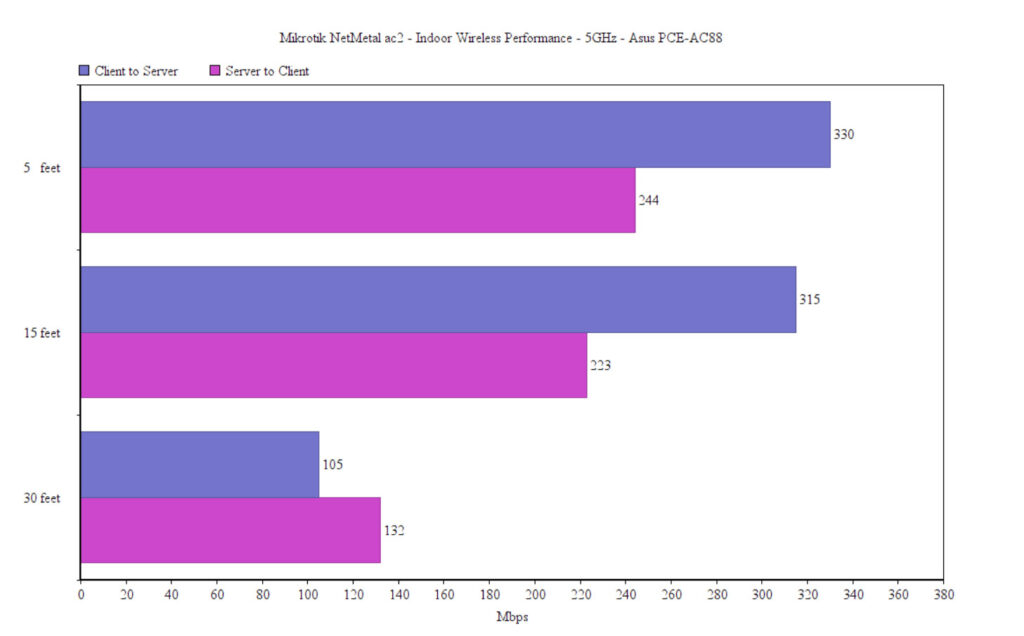 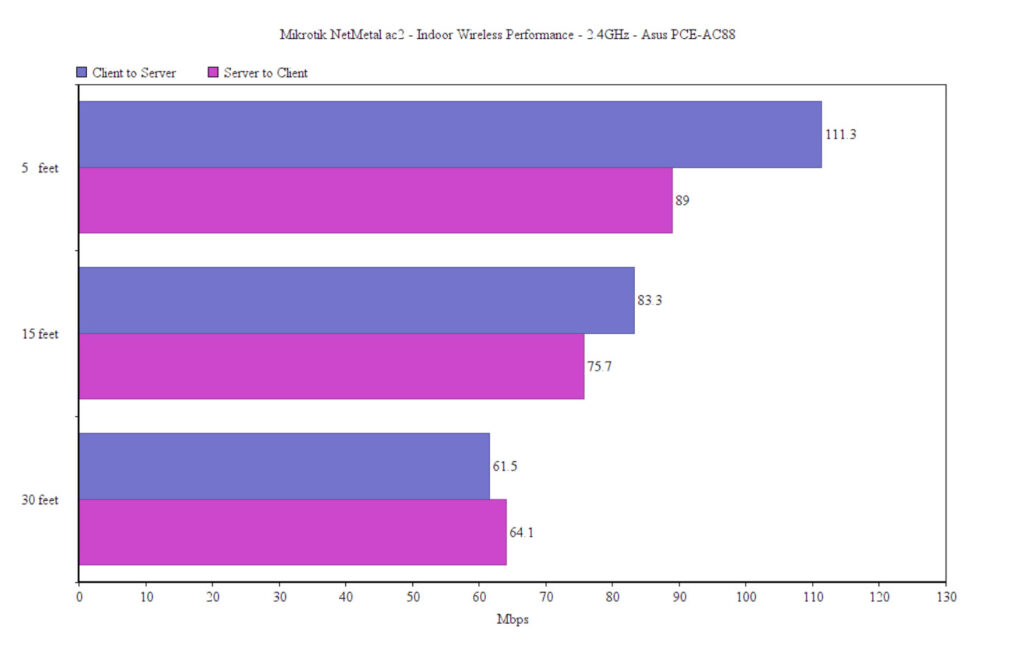 On the next step, I took the NetMetal ac2 outside and used a laptop as the client device (it’s equipped with an Intel 8265 WiFi adapter) in order to see at which point does the signal get too low to ensure a usable WiFi connection. I ran the same tests with the DrayTek VigorAP 920RP, so I measured the signal strength and the throughput at the same locations. That being said, on the 5GHz network, in front of the NetMetal ac2 (the first location – approx 70 feet), I got an average of 93.8 Mbps (-46dB) and on the 2.4GHz network, I measured an average of 39.3 Mbps (-42dB). The second location is farther away, at about 350 feet and, while when I tested the VigorAP, the trees just lost their leaves, I wasn’t so lucky this time, so the signal had a bit more trouble reaching the access point (I did try to stay in line of sight as much as possible). That being said, I saw an average of 81.8 Mbps (-65dB) while connected to the 5GHz network and an average of 28.3 Mbps (-54dB) on the 2.4GHz network. 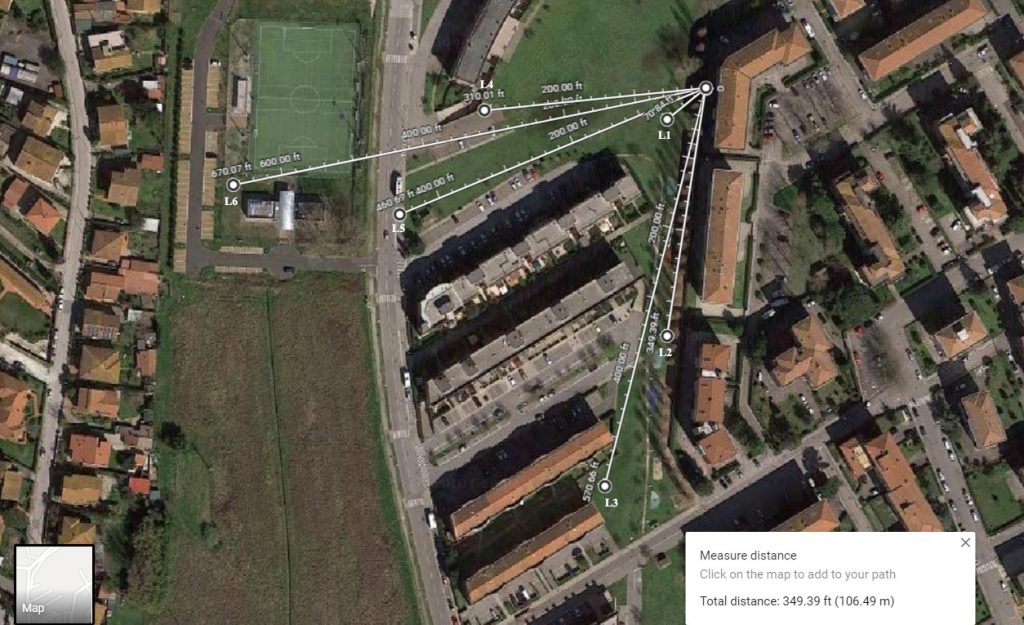 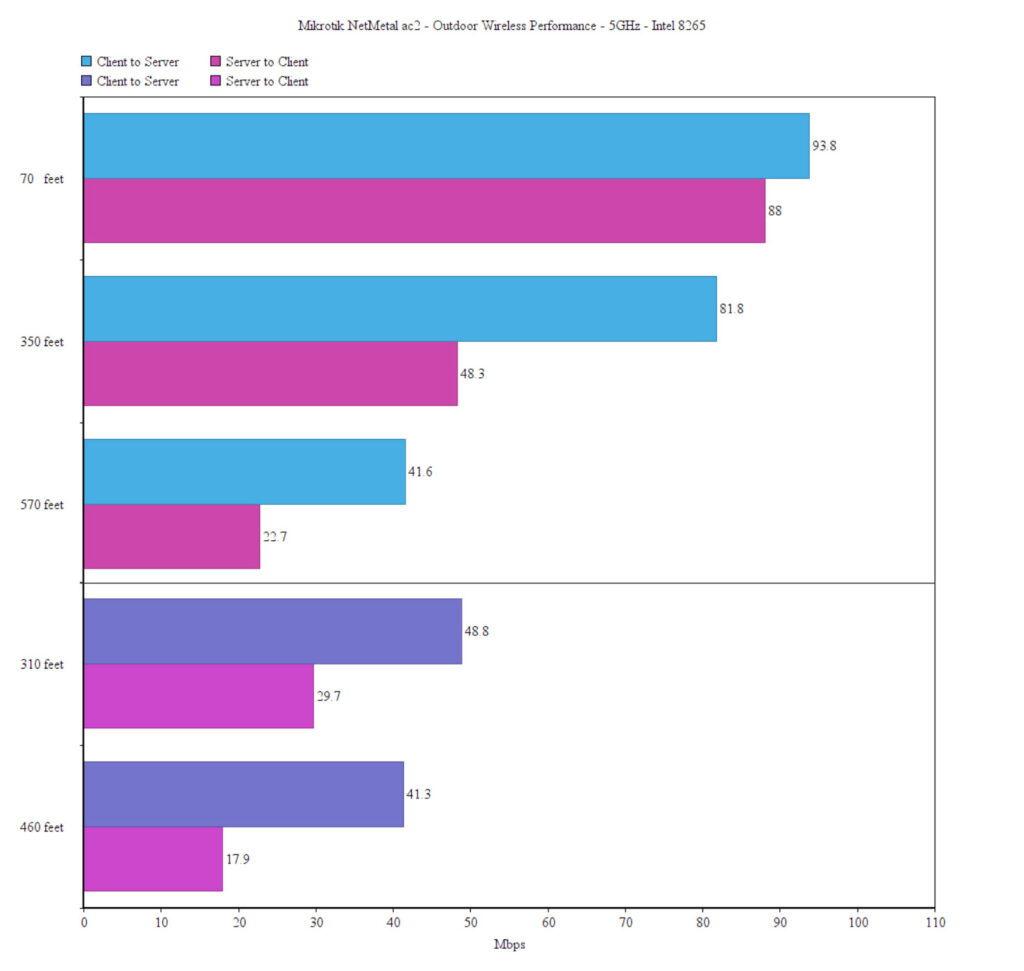 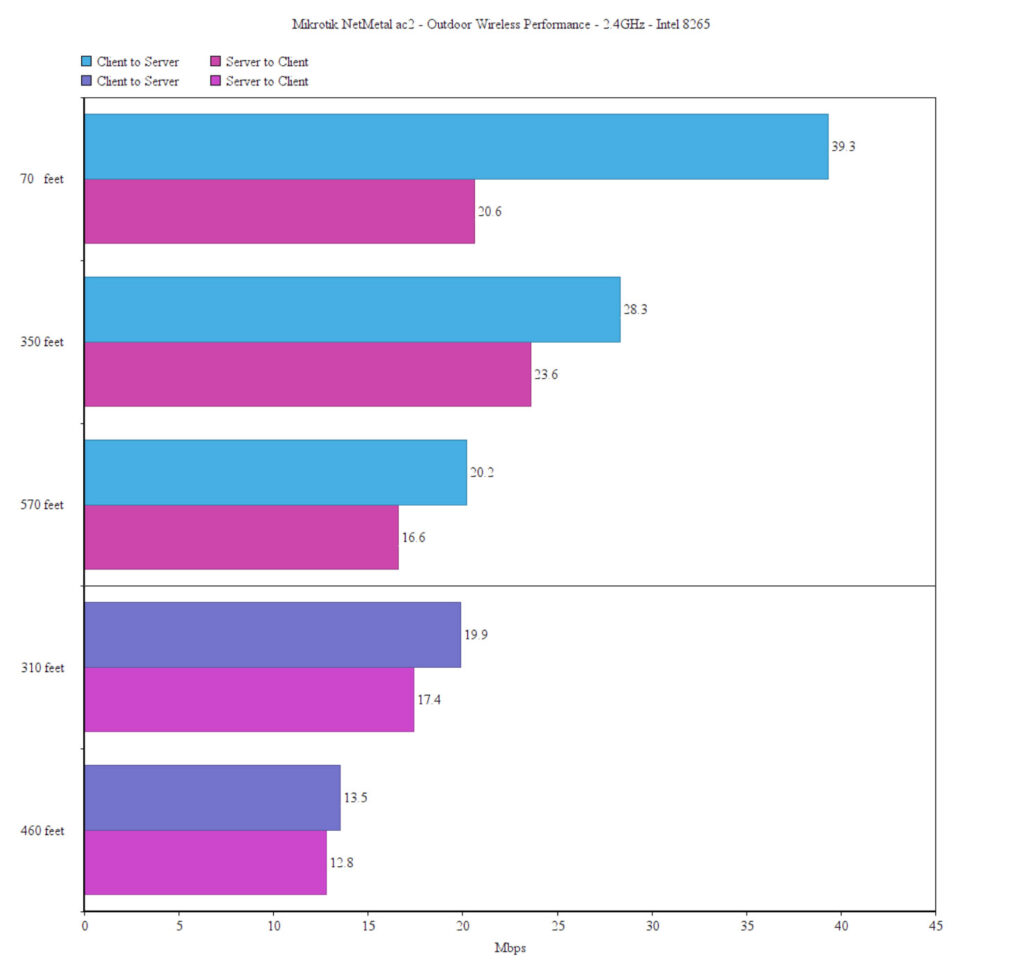 The Mikrotik NetMetal ac2 is one of the most robust outdoor wireless access point that I have tested so far, sporting a fully metallic enclosure and it seems well protected from bad weather (yes, even from harsher winters where few remain operational). It also does offer a decent wireless performance, but I did test it with a pair of weaker antennas, so it can deliver a far better performance with the right type of antennas (especially for PtP applications). The RouterOS is a fantastic software that’s far above the consumer grade solutions out there, allowing the user to customize everything to their liking (and yes, the NetMetal ac2 can also be used as a regular router). The problem is that you need to know exactly what you’re trying to achieve, otherwise, it’s very easy to get lost in the myriad of options and mess things up, so yes, the learning curve is quite steep. Mikrotik has alleviated this issue quite a bit with the mobile application which is far more intuitive to use than the web-based interface. But, is there really enough reason to upgrade if you have the previous NetMetal generation? The NetMetal ac2 is just as rugged as its predecessor, but the internal hardware has been improved and, while the RouterOS offers the same features, the performance should be better while running some applications, as well as the wireless throughput. 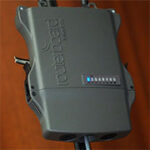