The Paris Rhone PE-AH017 is a 4L ultrasonic cool mist humidifier that was developed by the French-based manufacturer and it’s a fairly stylish-looking device with a touch-sensitive panel in the front and a top-filling container (supports up to a gallon of water).

This can be said about most other humidifiers available on the market, so what’s so special about the Paris Rhone humidifier? The manufacturer claims that they use a very accurate humistat (this will be tested), that the device is very quiet, so it’s suitable to use in a bedroom during the night and that it allows the use of essential oils to give some fragrance to the air. This is not the first time that I check an ultrasonic humidifier (I also had a look at the Levoit Classic 100) and the technology behind these devices is very interesting. 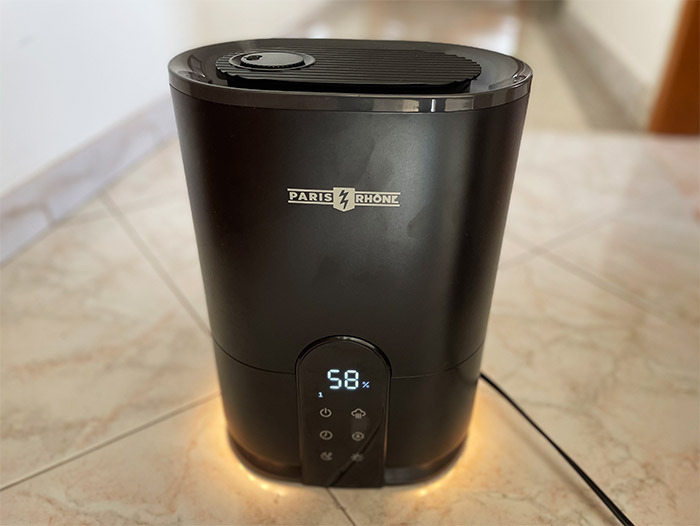 Instead of pushing water towards a fan (via a wick filter) as in the case of the evaporative method, the ultrasonic humidifiers rely on a vibrating plate that’s powerful enough to create mist from water particles and then to spread them around the room. With that in mind, let’s have a closer look at the Paris Rhone humidifier and see if it’s able to rise above its competitors.

There isn’t really a design standard for humidifiers, but most that I saw had a larger base and a narrow neck pointing upwards to let the mist flow outwards. That’s mostly suitable for the smaller humidifiers that can easily sit on a desk, but the Paris Rhone PE-AH017 is not a small device and, at its 12.6 x 8.9 x 6.1 inches (32.0 x 22.6 x 15.6 cm), it will better sit on the floor. Still, it’s really huge, so I should be able to also put it on a low table or shelf. 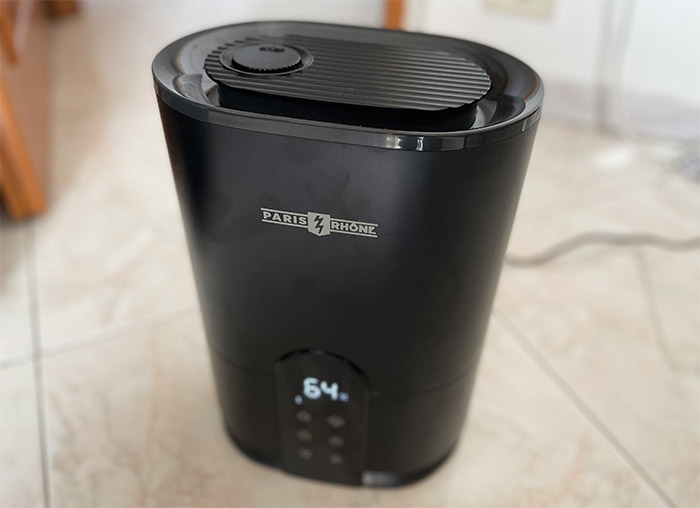 And the design of the Paris Rhone humidifier is suitable for pretty much any type of room (living room or bedroom) due to the minimalist tone and black matte finish. The device is obviously made of plastic, it has a base that’s only slightly divided from the rest of the humidifier body and, at the top, there’s a handle-like area which actually works like a handle to allow you to remove the top and pour water. In terms of weight, the Rhone Paris humidifier weighs about 3 pounds when empty which will go up significantly as you add water (as expected). The device can be divided into three parts and they just sit on top of each other, as you will notice after removing all the stickers (after taking the humidifier from the box).

The top-most part can be considered the water container lid and it only has a rotating cap that allows you to change the direction of the flow of mist. This section is simply positioned on top of the water container (it just pops off) and, after removing it, you’ll be greeted by the water tank (the area where you need to pour the water), a tall vertical tube and a strange-looking locking mechanism at the bottom. The vertical tube is empty inside and it gives you a quick peak at the next container (the water reservoir). But what about the locking mechanism? I have not found any info in the manual, but it does seem to be a demineralization filter which cleans up the water as it goes towards the water reservoir. And the lock/unlock mechanism is simply there to allow you to clean it if it gets too dirty (mostly from hard water). 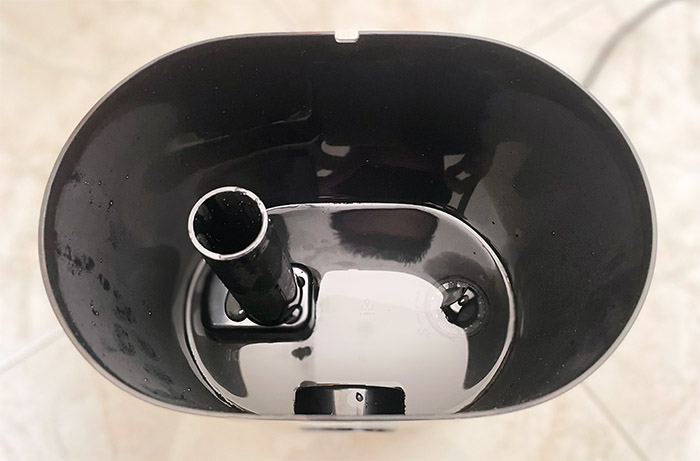 The water tank can be removed by simply lifting it (it’s not locked in place) and you should be greeted by a few new elements. First, there’s the water floater (that things that balances up and down) to detect the water level, then there’s a rising piece of plastic that’s the air outlet which pushes the mist outside the chamber (and into the room). Lastly, there’s the piezoelectric atomizer which is the main piece of the Paris Rhone humidifier since this is how the device makes the mist. 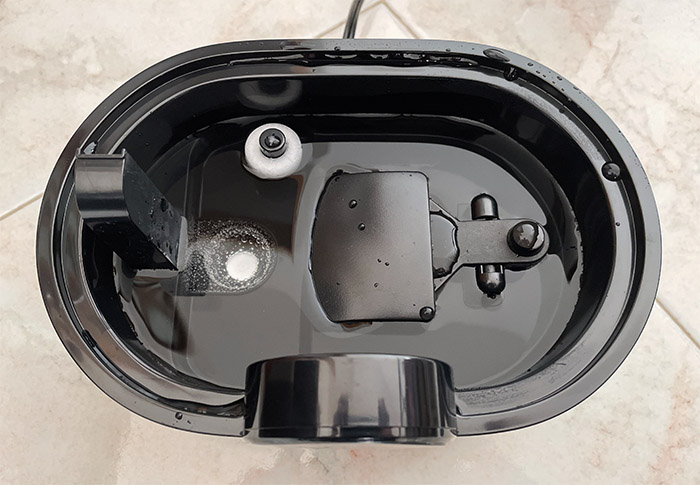 After putting everything back together, I need to mention the silicone feet that keep the humidifier into place (not that the weight of water wasn’t that effective) and the power cord that’s permanently attached to the device – it’s 5-foot long. As for controls, this is not a smart device, so you will have to use the touch-sensitive buttons that are fast and responsive. Lastly, I knew that the Paris Rhone humidifier had the means of adding essential oil and this was enforced by the fact that there were some strips in the package.

But where’s the tray? It’s apparently on the side of the device, way at the bottom and to open it, you need to push on the tray. This way, it will pop out by itself. Put a few essential oil drops and close the tray back and you should be good to go. After powering on the humidifier, I noticed that there’s an LED light that surrounds the base and yes, it’s just for aesthetic purposes (it does look good though). 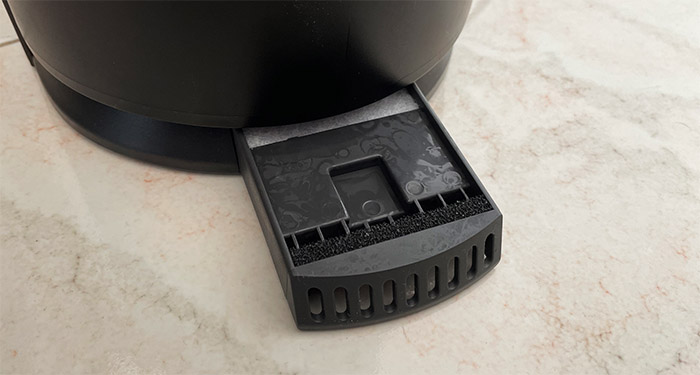 How does the Paris Rhone humidifier work?

You need to open the top lid and pour enough water into the tank – don’t worry about the lower container because any excess of water will simply sit in the top-most tank. Then, through the filter, the water flows downwards until the floater reaches the ideal position. This water gets near the ultrasonic diaphragm (which vibrates due to the piezoelectric transducer) and it gets broken apart forming a mist. Lastly, this mist is pushed upwards by a quiet fan through the air outlet and up through the thick tube. The mist is going to be cool since Paris Rhone did not add any type of preheating tech, so there’s no warm humidification available. Be aware that the parts that make the Paris Rhone humidifier aren’t attached together and I had a few instances when I wanted to move the device and was left with only half of it in my hands.

What about the controls?

While the case is matte black, the controls panel is glossy and, at the top, there’s a small display which will show the mode that you selected and the humidity level detected by the built-in sensor. Underneath it, there’s the Power button and the mist Level button – there are three levels available (press one time to move through them). Further down, there’s the Schedule button and pressing it once will add one hour until the device will turn off by itself.

Next to it, there’s the Auto button which checks the values detected by the humidity sensor and adjusts the mist level accordingly. By default, the Paris Rhone humidifier will try to reach 65% after which, it will turn off, but will start again as soon as the humidity goes back to 60%. Unfortunately, I found no way to change the default 65% value, so, if you use the Auto mode, you’re stuck with that value. At the bottom of the controls panel, there’s the Sleep Mode button and the Night Light button – if you long press this last button, you can select the brightness level, so it won’t disturb during the night. 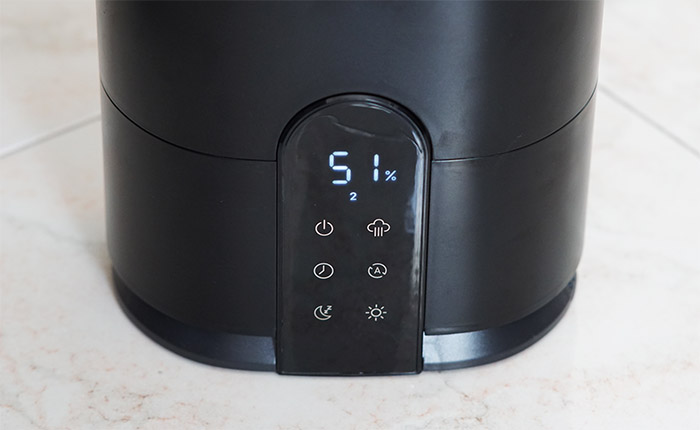 The Performance and Tests

The Paris Rhone humidifier is advertised as being able to cover between 107 and 322 square feet which seems doable considering the size of the device, so I decided to put it in my office and let it do its job. I wanted to see how accurate the humidity sensor was, so I checked the values that I got from a dedicated device and those that I saw on the Paris Rhone humidifier. I noticed that the initial readings are usually very wrong and it needs a bit of time (ideally, close to an hour) to get the humidity level in the room right. After leaving the humidifier for a couple of hours, it was still pushing mist out and the sensor showed 60%. And that’s because I had a heater turned on in the room, so it was a constant battle between the humidifier and the heater.

Still, the values would steadily rise if I didn’t open and close the doors that much (during the night). And this shows that it will depend on a lot of factors how well and how quickly the air is going to become more humid. If the house is well insulated, it’s going to be easy. But, an old house, lots of open spaces and multiple sources of heat will make it a bit harder for the humidifier to quickly do its job. In any case, my office room that’s 250 sq feet needed about three hours and a half to reach 65% during the day and far less during the night (a bit over an hour and a half). That is during the winter, with the heater on. I noticed that there is an automatic shut-off function when the water is too low, so you don’t have to worry that the device will function without water – there’s also going to be a small notification icon on the display. 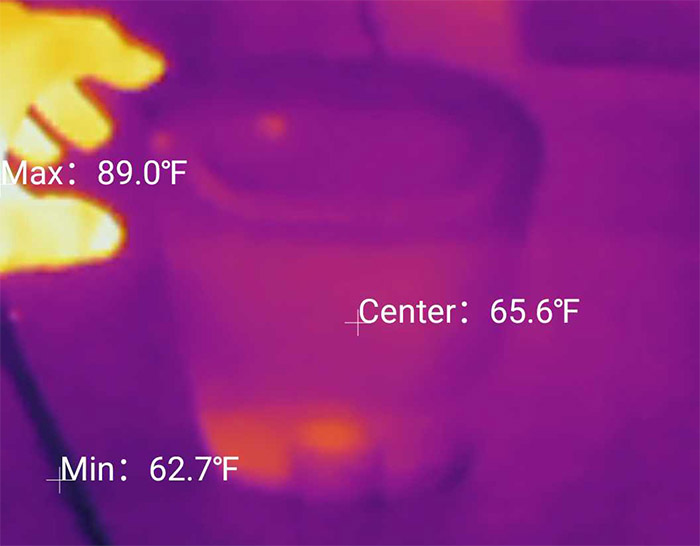 I still have the thermal camera available (AGM Glory Pro), so I checked whether the device gets hot or not and, as expected, it’s barely even warm. The manufacturer says that the power consumption is 20W, so I hooked the humidifier to a smart plug from Gosund and checked the displayed values. As you can see, when the mist flow is set at level 1, the power input was 11.1W, while at level 2, we can see that it raises to 13.4W.

At the highest level (3), the humidifier draws 17.4W, so it’s a bit below the advertised amount, which is great. What about the noise level? I took a quick video to showcase just how quiet this device is. I could barely hear the water vibrating inside, but nothing more. So it will work just fine during the night, while you sleep.

Overall, I enjoyed using the Paris Rhone. It’s quiet, effective in a somewhat larger room and it’s easy to use the controls. The support for essential oils is also a nice touch, so would I say that the device is better than its competitors in the same price range? Well, it has everything that’s expected from an ultrasonic humidifier, but there is one thing that I didn’t like: Paris Rhone, please lock those sections in place (I always get a mini heart attack when I pick the device up)! Other than that, I have nothing to complain about, it’s a good performing device and the price is right, so if you’re in the market for such device, give the Paris Rhone humidifier a chance. 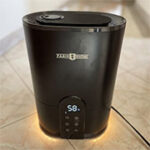