The Quntis ScreenLinear Pro LED monitor light for PC is exactly what it claims to be, a device that can be attached to your monitor and it shines a bright LED light downwards, on your desk. But, while the concept doesn’t really sound much more appealing than your regular lamp, there is a bit more to these fairly new type of gadgets.

Indeed, I have to admit that I was not familiar with these LED bars that pretty much stormed the market after BenQ made available the ScreenBar. And the idea behind the device was simple: the people that don’t have the space for a desk lamp could hang an aluminum tube at the top of their monitor and an adjustable LED light would shine down without creating any glare on the screen and simply ‘lighten up’ the desk and especially the keyboard. The benefits for eye sight were immediately apparent after the users started using a monitor lamp, so, naturally, these devices became popular. 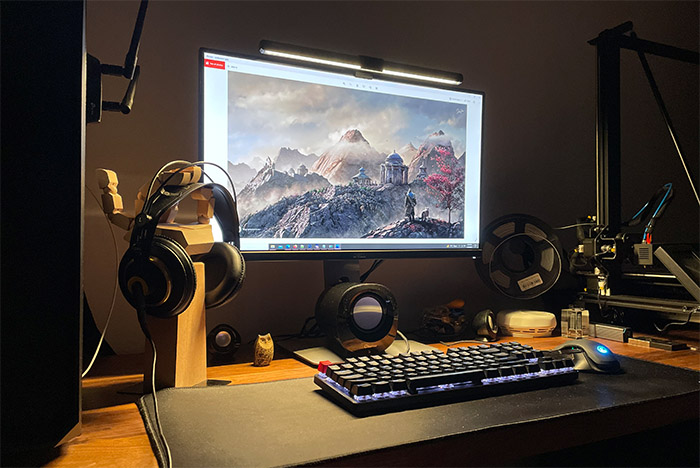 It wasn’t a coincidence that I mentioned BenQ’s ScreenBar, because the Quntis ScreenLinear Pro has taken a few notes, well, more like it kind of copied the entire homework because the device looks very similar to the BenQ concept. That includes the touch-sensitive buttons and the way the cable connects to its back side. The whole concept may be similar (the light bars aren’t identical), but the advantage that Quntis has is that it is (at the moment of writing) much cheaper, while offering pretty much the same performance. The Quntis ScreenLinear Pro was designed to fit monitors between 15 and 22 inches but, even though I had a 25-inch monitor, the size of the bar was more than enough to cover enough area from my desk.

The Quntis ScreenLinear Pro does have a length of 15.7 inches and, while I found it enough for my needs, there is a larger model called the Quntis ScreenLinear Pro Max which seems to be more suitable for monitors between 22 to 29 inches. Out of the box, there’s a metallic bar that’s covered by what the manufacturer calls an elegant black matte finish (as opposed to a less gracious dark shade) and I did like the slightly rough, but still soft enough feel of the bar. There are some plastic elements where the engineers inserted the LED light strip and looking through the transparent screen, I could see that there is a reflecting film to push the light downwards. The light doesn’t seem to be uneven and I noticed no flickering which would tire the eyes.

To make sure that’s truly the case, I checked with both a professional mirrorless Sony camera and with a camera phone which confirmed that the LEDs won’t bother the eyes. Well, as long as you don’t look directly into them. And the support does allow some degree of angle adjustment, but not as much as I would have liked. The support is mostly made of plastic and it needs to be slid over the metallic bar until it reaches the center and allows an easy access to the USB-C port. The design of the support is again, very similar to that from the BenQ light bar, sporting a clamp that should ensure that the device remains at the top of the monitor and, towards the rear end, there is a counterweight.

The Quntis ScreenLinear Pro is fairly light, so it doesn’t need a heavy counterweight and the one provided by the manufacturer seems to be enough to keep the light bar into place. I need to mention that you can adjust the position of the counterweight and that you do get multiple clamps in order to fit various types of monitors. To be more specific, there is an already installed piece which is suitable for thinner monitors and, as expected, there are silicone pads to not scratch the monitor. If you have a thicker monitor, then you will have to remove it (simply slide it off) and insert the piece provided into the package.

The clamp does open up quite a bit, seemingly being spring operated (hopefully, there is no rubber band which will get loose over time), but, since I have a Dell U2515H, the monitor has a particularly-shaped rear panel. So, none of the provided pieces fit and I had to use the clamp without them in order to finally remain steadily at the top of the monitor. I saw that this type of LED bar is not suitable for laptops (which is expected) or for curved monitors. The provided USB-A to USB-C cable is 6.5-feet long (2 meters) and that should be enough to reach from your Desktop PC to the monitor, even if it sits at ground level.

At the same time, I did find it better to insert the USB-A end of the cable into the monitor itself (and I am sure most monitors do have at least a USB port built-in). That’s because when the monitor turns off, the LED bar will turn off automatically as well. Although you do get the option to Power it on or off from the touch-sensitive button if you prefer. The USB-C cable needs to be forced a bit into the connector, otherwise the bar will not light up and I have tried other cables and only a few fit in properly, so keep that in mind. But I did like that Quntis used a braided cable which does increase the aesthetic value of the LED light bar quite a bit.

The controls at the top of the Quntis ScreenLinear Pro are positioned in a similar fashion to the BenQ’s LED bar, so, on the right side, there is the On/Off touch-sensitive button – a light touch is all that’s needed to activate any of the available buttons. Next to it, a bit to the left, there’s the Auto Dimming button which, once enabled, it will adjust the brightness level accordingly to what’s detected by the sensor. The brightness sensor is positioned over the support clamp, on the upper side of the metallic bar, in a manner as to not be affected by the light coming from the monitor.

There are two other touch-sensitive buttons, one responsible for adjusting the brightness (three intensity levels) and one for changing the color temperature. The Quntis ScreenLinear Pro can go from the overly warm 3000K to the the cold 6500K – there are four separate levels that you can choose from. I did not have an instrument to check how bright the LED bar can get, but it gets bright enough to make everything properly visible on the desk – then again, if you need anything brighter, then perhaps you should just leave the lights on in the room. 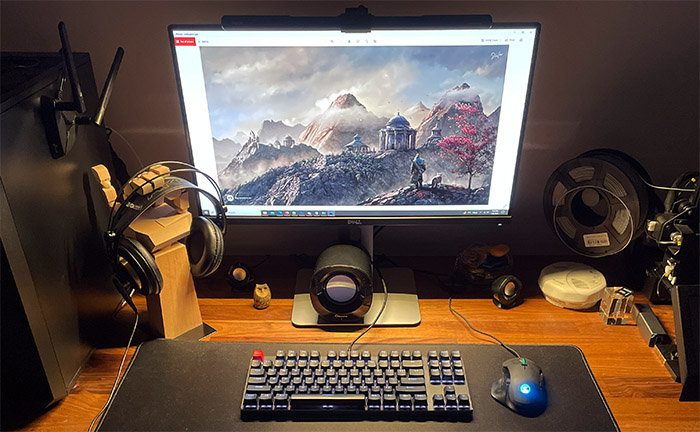 As a conclusion, all I can say is that this is that I am surprised this device wasn’t developed earlier because it is a simple concept and incredibly effective to combat eye strains (and to make stuff visible on your desk, if that’s something you require). Quntis has definitely taken some inspiration from BenQ, but, considering that they managed to create a very similar device with a good build quality and a matching performance, it’s definitely laudable that they managed to keep the price tag so much more affordable. So, if you need a desk lamp and have a monitor, then give the Quntis ScreenLinear Pro a chance. 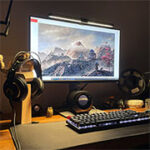