As the name suggests, the Redragon Ranger Basic M910-K is a no-frills mouse that’s designed to cater to the budget-friendly gaming community and it’s a very difficult market to navigate through consider the sheer number of inexpensive mice and keyboards.

So, what does the Redragon Ranger Basic M910-K has that its competitors in the same price range don’t? I suppose the main competitors could be considered the Logitech G203 and the Razer DeathAdder and, checking the specs, the Redragon Ranger Basic M910-K offers 8,000 DPI and nine programmable macro buttons (plus a fire button) which is above the aforementioned gaming mice. The M910-K also uses a Pixart P3327 optical sensor which offers a fairly smooth performance – sure, there are better sensors out there, but considering the price of the mouse, it’s still more than fine.

Also, the Redragon Ranger Basic M910-K is not ambidextrous considering the position of the buttons, but it does have generous RGB areas all around the case. Plus, you do get three dedicated buttons for adjusting the RGB and even a software to change the parameters of the mouse as you see fit. Lastly, the Redragon Ranger Basic M910-K is a wired-only gaming mouse which, I suppose, can be a deal-breaker for some. Of course, there is more to a mouse than the software and the technical specs, so let’s put it to the test and see if it’s worth getting considering that, as I said before, there are so many options out there.

The Redragon Ranger Basic M910-K is compact and quite light, especially when compared to the GameSir GM300, and there is also less amount of customization available (from the design point of view), which makes sense considering the price tag. So yes, we are dealing with a 4.6 ounces-heavy gaming mouse that sports a fairly classic shape and as expected, it is entirely made of plastic. The top is soft matte black plastic that’s very nice to the touch, while on the sides, the plastic feels a bit cheaper.

The left and right mouse buttons are slightly elongated, and they’re shaped in a manner as to keep your fingers properly into place and not slide even an inch. I assume it’s a design choice to improve the accuracy in gaming, although I did not see an actual difference than when using other mice. In any case, I had hoped that my palm would rest the same as on the much heavier GM300, but I always found myself arching the palm of my hand so the only contact with the mouse was with the tips of my fingers.

This happens because I have very long fingers and that slope on the buttons encourages a higher positioning of the fingers and not to rest them all the way towards the front. So, people with smaller hands will have better luck having a more comfortable use of the Redragon Ranger Basic M910-K. But Redragon made the curios decision of adding a somewhat stiff cable. Yes, it’s braided, and it feels solid, but considering that the Redragon Ranger Basic M910-K is so lightweight, it can move the mouse around.

That’s not really a problem when you let go of the mouse, but it does offer that extra bit of resistance that wasn’t really necessary. There are four rubber feet on the bottom, but they’re too slippery, so they don’t do much to keep the mouse in place. Now let’s talk about the LEDs. Redragon has been very generous in this regard, so there are LEDs on the sides, at the top and on the front shining through and yes, there are various effects and colors available. I also like that you can adjust the brightness and the LED from underneath the logo doesn’t shine a beacon for Rohan, and I can actually enjoy using the mouse during the night.

As for the buttons, there’s the scroll wheel and the two main buttons, while a bit to the center, we get the DPI increase and the DPI decrease buttons, followed by the Light Mode button which switches between seven different lighting modes. On the left side, there are two horizontal buttons that we commonly find on gaming mice, one is for moving Forward and the other for Backwards as you would on the keyboard, but keep in mind that these are default values that can be changed in the software.

There is another button here and it’s the Rapid-fire button which I am sure that it could come in handy in some games (just be careful to not get banned). Before moving forward, it’s worth mentioning that you cannot disconnect the cable, but it is fairly long, measuring about 7 feet.

The Software for the Redragon Ranger Basic M910-K

The Redragon Ranger Basic M910-K does work really well with the Redragon Gaming Mouse Config software, and you do get a very good number of options that you can change. The software offers five Modes for each Profile that you create which is a lot and each Mode has four separate areas for customization.

The first is called Lighting and here, it’s possible to change the Effect, the Brightness and Speed, and, if you choose Full Lighted, you can select the color as well. Under Customize, you get to set macros and select the role of each button and I am not kidding, you can change the role of every button. Under DPI, it’s possible to adjust the maximum DPI for each of the five available modes; it’s also possible to change the pointer speed, as well as the scroll speed. Lastly, under Macro, you can create various types of combination which can then be applied to the preferred button.

The Redragon Ranger Basic uses the Pixart P3327 optical sensor which can go up to 8,000 DPI and I suppose it’s more than enough for most games, especially FPS, but since it’s an entry-level sensor, it’s not really going to be a champion in terms of tracking speed, but it should still be decent.

The 8,000DPI should still be enough to avoid pixel shifting when playing games, especially at higher resolutions (let’s say 1440p and above). And, as I mentioned when I tested the GM300, the optical sensors do use various techniques to keep a smooth movement even at higher DPIs. So, I decided to check out the consistency and velocity of the Redragon Ranger Basic M910-K using the Microe Mouse Tester software. The mouse has been fairly consistent at 400, 1000, 4000 and 8000 DPI which is nice considering the price of the mouse.

While I was very impressed by the performance of the Redragon K656 keyboard, the Redragon Ranger Basic M910-K is an alright mouse. It doesn’t have anything out of the ordinary, it’s an inexpensive, no-frills gaming mouse that will perform alright in most games. I could mention the possibility to set up macros and change the role of each button which is a bit out of the ordinary for the price tag and the RGB is also great, so yes, if the budget it tight and you need a gaming mouse, check out the Redragon Ranger Basic M910-K. 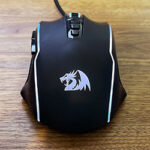