The Redragon K565 is a very budget-friendly full-sized mechanical keyboard that wants to prove that there is no need to invest too much to get a good typing experience. That is, unless you’re a keyboard enthusiast. But for the large majority of people, a mechanical keyboard with hot-swappable switches and RGB, that doesn’t cost an arm and a leg will sound appealing.

So, what’s the catch? Well, there are some compromises to keep the cost down and this includes limiting the spectrum of RGB effects (there is also no software), as well as making the Redragon K565 a wired-only device with no USB ports at all. Still, the build quality seems to be good, with a metallic plate at the top, while the rest is hard plastic. So, overall, it’s actually not that different from my daily driver, the GMMK 60% – kind of.

But what about the switches? The Redragon K565 uses OUTEMU switches (my model has red switches) and yes, they’re a clone of the Cherry variants. They’re not bad, pushing the K565 leagues above the membrane keyboards, but it is a matter of preference. For example, the Tezarre TK63, another budget-friendly mechanical keyboard has Gateron red switches and the feeling was surprisingly more different than expected, but we will talk more about it in the following sections. So, without further ado, let’s put the Redragon K565 to the test and see if it’s a good starting point for people curious about mechanical keyboards.

As I mentioned in the intro, the Redragon K565 is a full-sized mechanical keyboard, so there are 104 keys which include arrow keys, Num pads, function keys and, well, everything else. I have gotten accustomed to the GMMK TKL and I admit that I was tempted to go even lower to 60%, but it’s nice to get back to full-sized and not having to compromise on the shortcuts and, in some cases, even for the arrow keys.

Still, the Num pads is probably the only area that I don’t use, so for accountants and people that work with number, I suppose that a full-sized keyboard is mandatory. That being said, know that just like pretty much all other mechanical keyboards, the Redragon K565 has its keys sitting above the flat board, so it’s very easy to clean. And you do get the option to remove and replace both the keycap and the switch, a feature that has gotten more common even on the cheaper boards out there and yes, you do get the tools to remove both pieces (I liked that the switch removal tool is metallic).

I initially thought that the plate underneath the keys was made of hard plastic, but no, it’s actually a metallic board. So, it’s nice to see that the Redragon K565 Rudra is not entirely made of plastic, even if at first touch, it may seem so. Then again, your fingers touch the keys and not the plate, but the metal ensures that there is absolutely no flex or creaks despite the size of the device. And don’t even try to forcibly flex it since it won’t budge an inch.

It’s nice to see it so solidly made especially when we’re dealing with a 17.1 x 4.8 x 1.4 inches wide keyboard (or 43.5 x 12.2 x 3.6 cm – GameSir could have learned a thing or two and made the GK300 sturdier). This also means that it’s not the keyboard to carry around on your travels, but it will accommodate nicely on a roomier desk.

It’s worth mentioning the three LEDs on the top right which will let you know when you’ve enabled the Caps Lock, the Num Pad and the Roll key. There are no other indicators (the LEDs underneath the caps don’t count) and checking around the case, I could only see the cable already attached to the rear side of the keyboard – I would have liked to see a USB-C connector. On the bottom of the Redragon K565 there are four silicone feet to keep the keyboard in place and two supports that allow you to raise the device at an angle (only one adjustment available).

I got a bit carried away with the teardown process of the Tezarre TK63, so this time, I decided to not take out all the switches and key caps, and instead, just took out some of the keys that had screws next to them. I ended up removing more than I wanted, but I could finally detach the top part and see what’s inside the keyboard.

The PCB feels solid, and you can add some foam between the plastic part of the case and the board in case you prefer a specific type of acoustic. If you want to mod the Redragon K565 more than that, you can change the switches since this is a mechanical keyboard. And, as you may already know, your options aren’t as limited as on optical switches. The switches can be a bit more difficult to get out, so just try to be as gentle as possible as to not bend the pins, but other than that, there isn’t much else to be said.

Perhaps, that the stabilizers are already very good, so they don’t really need to be modified. And not only the spacebar is stable when pressed, the other larger buttons (Caps Lock and Shift) also don’t go off-balance even if you don’t press them in the middle. It may sound silly, but I have had keyboards with this issue in a similar price range (an old URage keyboard – oh, I raged alright).

The manufacturer says that the keyboard is spill-proof which I suppose comes from the seal that’s formed due to the tight insertion of the switches (there is no IP rating). But I would still keep drinks and food away from any keyboard – just let dust be the number one enemy.

The Redragon K565 keyboard that I got uses OUTEMU red linear switches and, when compared to the MX cherry switches, they’re surprisingly similar. But not identical. The actuation force is 50 grams on the OUTEMU red switches and even if it’s only a bit higher than the MX, you’ll definitely feel the difference. The activation height is 2.1mm, so it’s pretty much the same as the MX switches (which is 2mm).

I know that a lot of people like the linear feel when pressing the buttons and even if I am a fan of brown switches (I like that slight slowdown when pressing the key), the OUTEMU red switches seem far more forgiving with my occasional mistyping so, who knows, maybe I’ll convert to the reds. That being said, do know that you can hear the spring when pushing a key down and releasing it, but then again, the same sound can be heard with the GMMK brown switches as well.

Still, neither use the original MX switches, so there had to be some compromises to keep the cost down. Don’t get me wrong, I am really nit picking here since unless you constantly move between keyboards and keep your ear close to the keys, you’re hardly going to see a difference. Now let’s talk about the dreaded key chattering which plagues not only the entry-level mechanical keyboards, but the more expensive models out there as well.

This is just my opinion, but I do think that the Outemu switches are a tad below the Gaterons, so I do think that there is a higher chance that they may develop this chattering issue. The good news is that the switches are hot swappable and cheap, so it’s not a difficult fix if one key needs to be replaced from time to time. If you want zero chance of developing key chattering, check out keyboards with optical switches.

The manufacturer used double-shot injection molded keycaps made of ABS and there is nothing to complain about – the finger sits nicely in the middle of the keys, and I had no issue finding any of the key (not too small, nor too large). I would have liked some variation in color since the all-black can be a bit boring, but I suppose I couldn’t ask for more considering the price tag of the Redragon K565. It’s possible to replace them, so you’re free to get whichever color and design you like.

I think this is one of the main weaknesses of the Redragon K565 keyboard. Sure, we do get RGB lighting which shines nicely through the keycaps but there is very little actual level of customization available. You can change the pattern that the LEDs will adopt, and this includes a tap-to-shine mode; you can also adjust the brightness of the LEDs. But that’s about as far as it goes.

You can’t set a specific color with a desired style – for example, I am not very fond of multiple colors always changing and pulsating but prefer a single static color at a lower brightness. This isn’t a possibility on the Redragon K565. There is also no software that would allow the desired level of customization.

The Connectivity and Latency

We’re dealing with a wired-only keyboard and, because the cable is permanently attached, you can’t change it (for a different color). Also, in terms of latency, since it’s wired, there is no latency at all.

I really like that the budget-friendly market for mechanical keyboards has evolved so much over the years, and it is entirely possible to get good value without having to go past $100. The Redragon K565 is proof of that considering that it offers hot-swappable switches, some modding freedom and the keyboard is full-sized. There is also RGB which is limited in terms of customization and the keyboard is wired-only. With that in mind, the Redragon K565 remains a solid board and it does provide the possibility for future upgrades, so it is an excellent entry point into the mechanical keyboards’ world. 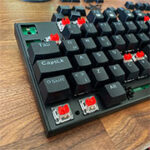