The Reolink RLC-511WA is a WiFi outdoors-suitable camera that was built as an alternative to the PoE-powered RLC-511 so, if you were impressed by the image quality of the 5-megapixel sensor and needed the zoom ability of the camera, but a wired connection to the router is out of question, then Reolink has got you covered.

Indeed, the RLC-511WA has kept the same sensor that performed great when I tested the RLC-511 mostly due to the SuperHD resolution (both during the day and during the night) and the 4x optical zoom was quite fast which made the camera suitable for busy or dynamic places, but when using the WiFi connection, we may see a rise in latency (we will put that to the test). The 3D dynamic noise reduction is still there and the device features a rugged exterior to survive the outdoor conditions, but I noticed that Reolink has added some new elements, such as a spotlight that can activate when the camera detects movement and the support for dual-band WiFi. 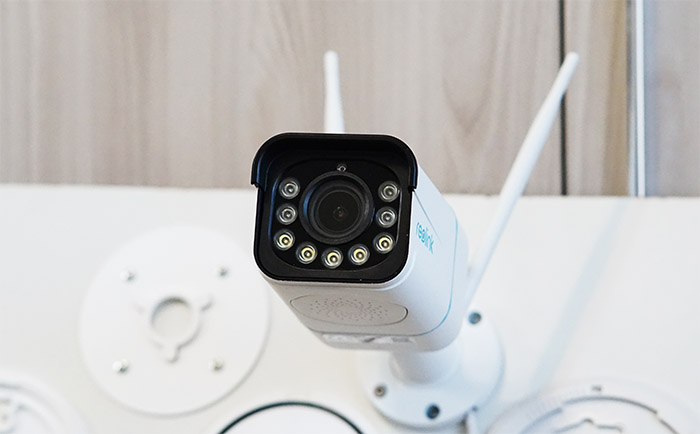 It’s not WiFi 5, but still a great addition considering that most (if not all other) budget-friendly wireless cameras are stuck with the 2.4GHz radio. Other than that, the support for NVRs and even some NAS devices remains on the RLC-511WA and, since we’re already aware about the potential of the camera, let’s have a closer look at it and see whether it’s going to be a great addition to the security aspect of your home or office and if the WiFi connection will have any impact on the image quality.

The Reolink RLC-511 was a fairly large outdoors-suitable camera (that made the Annke NC400 look like a miniature device) and the RLC-511WA is just as imposing, quickly gathering the attention of any passerby, especially due to its two rear-mounted antennas (they’re detachable). And that’s a good thing when it comes to security cameras since this way, the device can act as a proper deterrent, actively discouraging potential trespassers. (Did you know that even the camera sticker is sometimes enough to discourage people from entering your property?) So yes, the Reolink RLC-511WA proudly flaunts a rectangular metallic body that’s covered by a white matte finish (it’s worth noting that the RLC-511 has a smoother finish) and in terms of size, the device measures 3.0 x 2.83 x 5.44 inches without the stand (and 9.37 inches with the stand), which means that we’re no really dealing with the recycled case of the RLC-511.

And it’s also enforced by the bottom placed speaker (with the cover still made of metal – nothing is plastic here with the exception of the antennas) which can be activated to scare off any intruder – it does a very loud sound. The metallic enclosure is IP66-rated (same as the non-WiFi version) which means that the camera is protected against dust ingress and will survive powerful jets of water (which often happens during powerful storms). The RLC-511WA can be mounted in the open, just make sure that you have put in place the suitable protection measures against lightning and that the distance is not too long so that the connection with the router gets unstable. Temperature-wise, the device has been built to remain operational between 14 degrees F and 131 degrees F which makes it suitable for areas where the winter isn’t that harsh.

Considering that it seems to share most of the features of the RLC-511, I had to open up the case of the RLC-511WA and see if the internal hardware is the same as well (spoiler: it’s not, instead, it’s closer to the RLC-511W). The tear-down process is just as easy as on the other Reolink cameras and all I had to do was to remove the four screws from the back of the device and, after gently detaching the two parts, the layout is very different than on the RLC-511. Still, I could identify a Novatek NT98523MBG processor which is the same as on the RLC-510A and the RLC-520A and bit more powerful than the chip from the RLC-511.
I could also see 128MB of flash memory from GigaDevice (FP2024 5F1GQ4UBYIG), 256MB of RAM from Samsung (SEC022 K4B2G16) and a Ruimeng MS41929 IC which shows that the RLC-511WA is an upgrade over the RLC-511 in terms of internal components. 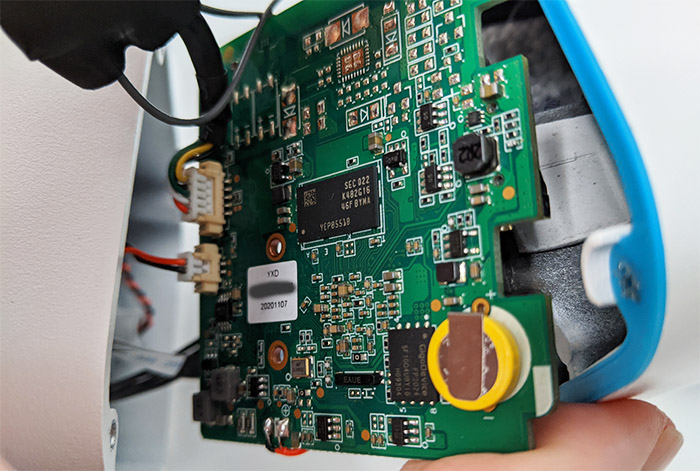 The front of the camera is occupied by a fairly large high definition lens and surrounding it, there are 4pcs IR LEDs, the spotlight and the daylight sensor (which triggers the night vision). At the bottom of the RLC-511WA, besides the fairly large speaker, there’s also a microphone, so it does support a two-way conversation. The stand is the same as with the RLC-511 which means that you’ll need to use the hex key (provided in the package) to manually adjust the angle of the camera and there’s now a white cable that gets divided into three separate smaller cables (with previous models, the cable was black). One of these shorter cables houses the Reset button (press and hold it for 10 seconds to return the camera to the default factory settings), the second allows you to connect the power adapter (and yes, you do get one in the box), while the last cable can be used to connect an Ethernet cable.

Of course, it does not support PoE, so it’s only use is to provide a more stable connection in case your router is not powerful enough to reach the camera. Lastly, Reolink has included a microSD card slot (covered by a piece of plastic that’s screwed into place) and, unfortunately, it uses the older tech, the one supporting only 64GB (still plenty for a couple of days of footage). 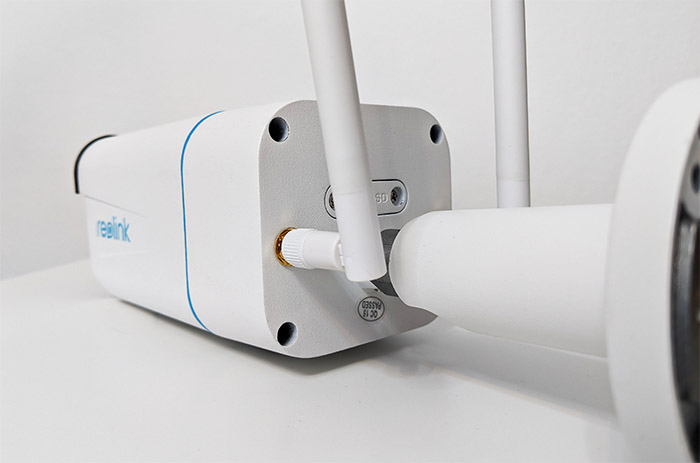 Since the Reolink RLC-511WA is not a PoE camera, the installation process is a bit different than other cameras from the RLC family. Well, not that different since you still need to find the right spot, drill the three holes, attach the device and route the cables. It’s better to check if your router can reach the camera before installing it and see if it can support the proper bitrate (for example, if the connection is unstable, you won’t be able to see the footage at maximum quality). If you are able, you can make use of an Ethernet cable and bypass completely the WiFi connection, although, at that point, the RLC-511 may be the better choice (mostly from the price tag point of view). After the hardware installation is done, download and install the Reolink app on your mobile device, give access to the required services (otherwise it won’t work) and then you will be greeted by an empty interface. Tap on the Plus sign to Add a new Device and it will require that you scan the QR code from the camera – thankfully, the RLC-511WA does have a QR code on its bottom, so scan it and wait for the Device initialization. 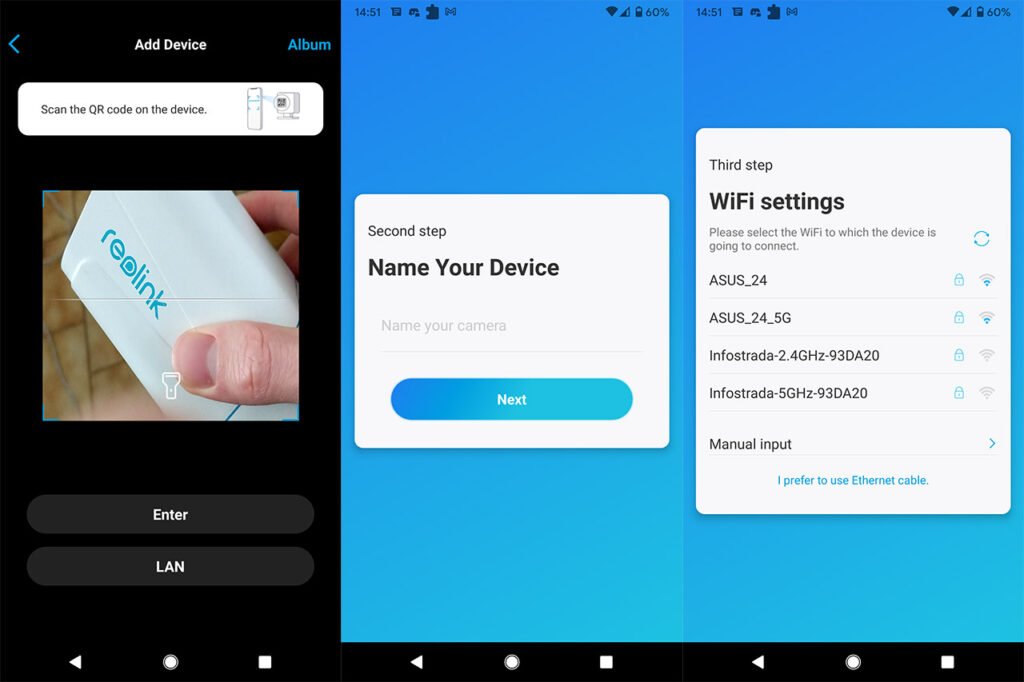 Afterwards, give your device a name, select the WiFi network that you’re going to use – it seems that the camera worked fine with my 5GHz network (even though it’s from an 802.11ax router) and after getting the message that the Initialization is finished, then you should get full access to the app. The main page will display the bitrate on the top left corner while the top half part of the display will mostly be occupied by the live view footage. The RLC-511WA has a max bitrate cap of 8,192 Kbps and, while on WiFi and the max image quality, I saw that the average was between 4,400 Kbps and 5,000 Kbps – depending on the time of day, it can go higher. 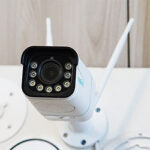