The Annke NC400 is one of the first PoE cameras to make use of the new NightChroma technology which has the role of rendering the night footage in full color. And yes, I know that a lot of other manufacturers have taken pride in achieving colored night vision, but the NC400 blows all of its competitors (in the same price range) out of the water due to its noise-less footage the there is little light and in case it’s pitch dark, the camera makes use of the built-in spotlight to maintain the zone of interest fully visible (and in color!).

Of course, the manufacturer has also focused towards offering an excellent day-time footage by relying on the 120dB true Wide Dynamic Range tech, as well as on 3D DNR and other image enhancement algorithms and, considering that this is an outdoors-suitable device, the NC400 is also build to withstand the elements. 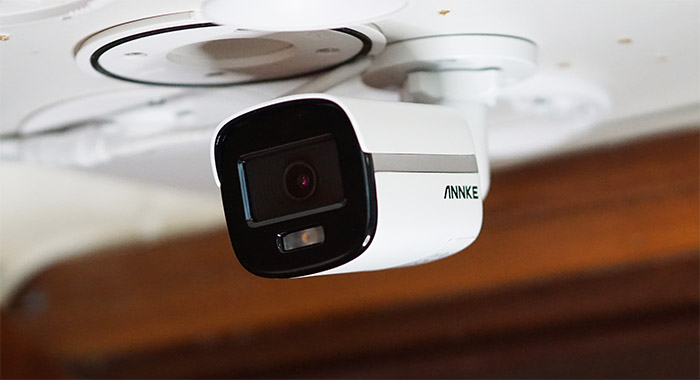 I have recently tested another Annke camera, the C500 and I was impressed by its seamless ONVIF compatibility that seems to also be a part of the NC400 and there is, of course, PoE support for an easy installation. And that’s essentially what the users require from an outdoor camera, great image quality during the day and especially during the night, some flexibility in installation and a rugged exterior to survive outdoor conditions. Since the Annke NC400 seems to tick all the boxes, let’s have a closer look at this new device and see whether it’s the best security camera in its category.

The Annke NC400 doesn’t drift too far from the traditional bullet-shaped camera, so, design-wise, it features a rectangular case fully made of metal and, apart from the front side, the device is covered by a white matte finish. There are some silver bands on the sides which I suspect will be a design signature for the new NightChroma camera series and I do like that they do serve a purpose above pure aesthetics (the teardown process has revealed that they keep the internal section in place). The Annke NC400 measures 6.3 x 2.7 x 2.6 inches, so it’s fairly compact and won’t attract too much attention towards itself, but don’t worry, that bright spotlight will make sure that the camera will make its presence known to any trespasser. 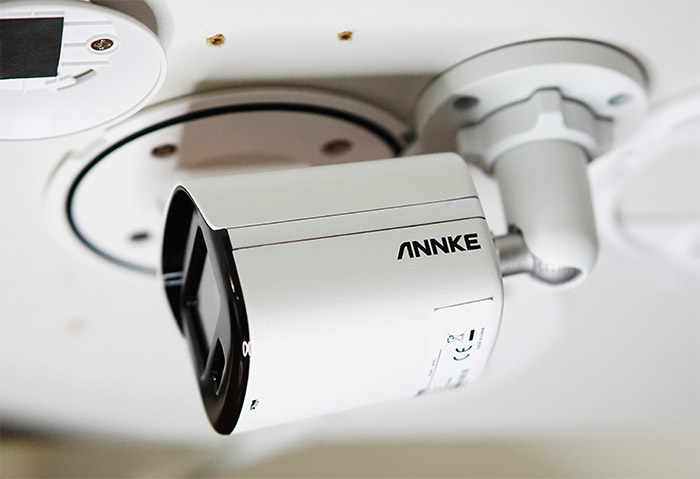 Indeed, the front section is a bit more different than on other IP cameras which usually have the lens in the middle and the IR LEDs surrounding it. Instead, the NC400 has the front panel divided by a plastic cover into two sections: a larger one for the 4-megapixel lens and a smaller one for the spotlight. This cover can be removed to reveal a motion sensor and the user manual suggests that there is also a microphone (although I wasn’t able to see it in action), but no speaker, so the camera doesn’t support a two-way communication. As I did with almost all other camera that I tested, I decided to open up the case of the NC400 to see its internal hardware. To access (and remove) the four screws, you need to gently detach the front plastic side (it’s kept by some plastic hinges) and then use the hole on the bottom of the camera (yes, every element has a purpose on the NC400) to slide the internal section outside.

This way, we get to see three interconnected boards, each with it own set of circuits: I was able to identify a HST-0064SXCR Group-Tek 2017 transistor, 128MB of flash memory (SPI NAND) from Dosilicon (1952A DS35Q1GA-1B) which is quite a bit for a security camera and what seems to be 128MB of RAM (SEC025 K4B2616). I also saw the HK-2019-8 CD9291945 chip which I couldn’t clearly identify, but I assume that this is the SoC responsible for the image processing. Before putting it back together and closing up the case, I noticed a silicone seal which has the role to keep out water and dust, and, as anticipated, the Annke NC400 is indeed IP67 rated, so you can leave it outdoors without worrying about the elements. Obviously, take all the necessary precautions against lightning strikes (add some surge protectors), but other than that, the camera is perfectly suited for harsh environments: it will remain operational when the temperature ranges between -22 degrees F and 140 degrees F (more than enough for those Canadian winters). 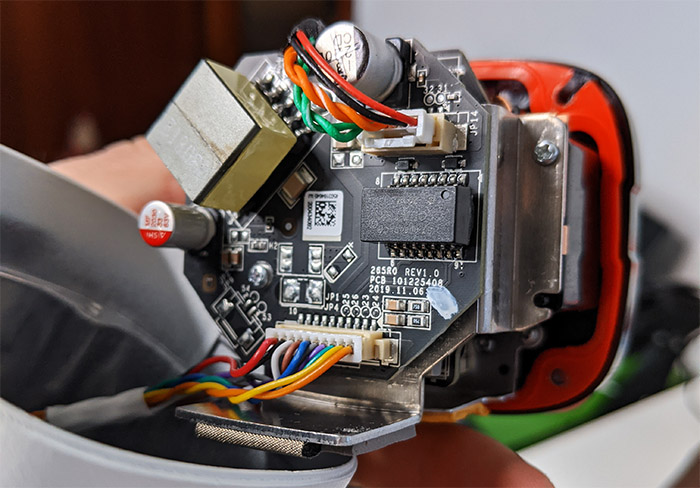 The camera relies on a stand to be mounted on a wall (there are three screws inside the package) and you will have to manually adjust the angle of the device – use circular piece to fix it into place. From within the stand, there’s a cable that come through (it’s attached to the main body of the camera) and it divides itself into two pieces at the end: one for the DC connector and the other for the Ethernet cable.
Annke did not add any Ethernet cable into the package, so you will have to use your own, but there is a waterproof lid that you can use to make sure that no water will slip in between the connectors (I did like that you can use it on a cramped cable). Since the NC400 is PoE, you can only use an Ethernet cable for both power and data, but you can also use your own power adapter if you don’t have a PoE switch or PoE injector available. I have checked the NC400 (181HC) for a microSD card slot, but, just like on the Annke C500 (I51DF), there doesn’t seem to be one available.

Similarly to the C500, the NC400 is a wired-only security camera, so there is no WiFi connection available, but it’s fine since you can rely on a single Ethernet cable to power it on and to send data. There’s also the possibility to use a power adapter and connect the camera directly to a router instead of using a PoE switch or adapter. I would argue that the latter is the better option if you have more than one camera available and PoE has been fantastic for outdoors deployment since it keeps cables to the minimum and you don’t have to worry about feeding power cables outside your home. To mount the NC400, you will need to use the drilling template (from the box), make three holes and use the screws to fix the camera into place (and that’s it). 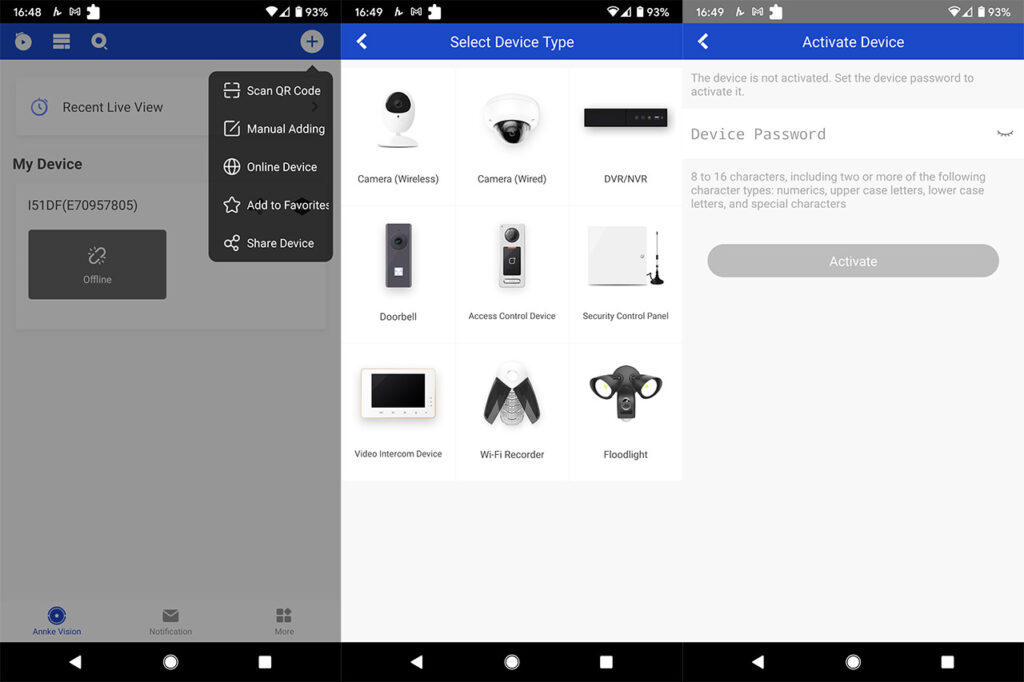 Afterwards, you should install the Annke Vision app (which is compatible with both Android and iOS), give it access to all the required media and services, otherwise it won’t work and then create a new account (does not require a phone number which is great). I already had the app installed so I simply logged into my existing account and, from the main page, I tapped on the Plus sign (from the top right) and selected Manual Adding since the camera did not come with a printed QR code. Next, I inserted the Serial Number, selected Camera (Wired) from the list, entered a Device Password to activate the camera, enabled the Annke Vision Service and created a Verification Code. That’s all that’s needed and you can change the name or go forward and check the user interface.

The app user interface doesn’t differ that much from when I used it with the C500, so, on the main page, I was able to see the live footage and I got the possibility to view up to 16 simultaneously added Annke cameras (it does make more sense on a larger screen). At the bottom, I got to choose the image quality which can be Basic, Standard or HD (the last one has a slight latency of under a second). Since it’s a wired camera, I suggest using the best image quality to clearly see all the details of the camera’s surroundings and, since the view angle is fairly large (102 degrees horizontally and 54 vertically), it does cover a lot more ground – a bit underneath the 120 degrees of the Argus 3. It’s worth noting that I did see a but of distortions towards the end and left side (the unwanted fish-eye effect), but it was still quite tempered. Next to the image quality icon, I could digitally zoom on the live footage (and move around the image with my finger), quickly capture a photo or start recording. 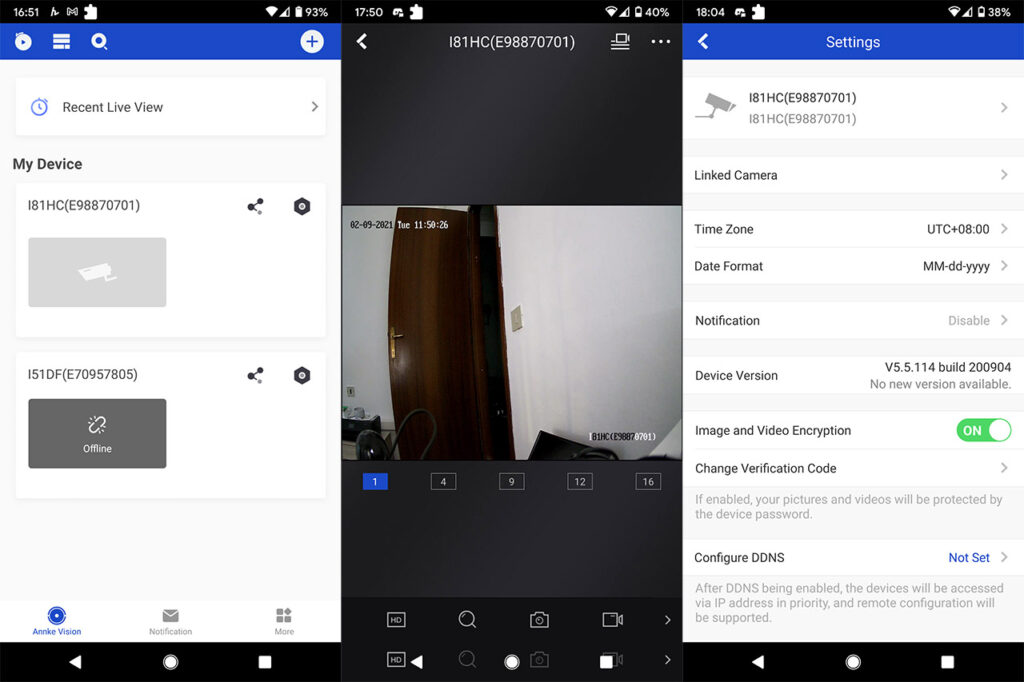 As for the image quality, using the max HD setting, it’s very similar to the Reolink RLC-511 during the day since both rely on the SuperHD resolution to deliver more detail and better colors, but the NC400 does get a slightly sharper image due to the 2560 X 1440p resolution. During the night, as I said in the introduction, I haven’t yet tested a camera that can rise up to the performance of the Annke NC400. As you can see from the images that I took with the app, the light sources aren’t overblown, there is very little noise (and that only far away) and it’s worth mentioning that the cars are about 200 feet away (the advertised range is only up to 100 feet, so it was an understatement). I have seen colored night vision before with other cameras (such as Argus 3), but it’s clear that the image quality is better and above what the human eye can perceive during the night. 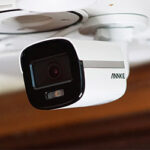