The Samsung Connect Home is the first move from the Korean-based manufacturer to enter the WiFi mesh system family (which has been growing rapidly in the last couple of years) but, it is not the first time Samsung has tried its hands on the development of a smart home hub, since it also owns the SmartThings hub – well, it’s not the creator, but more like the acquisitor of the successful KickStarter project, but nevertheless, the SmartThings is now under Samsung’s flag, a decision which has proven to be successful because the device is now one of the most popular hubs on the market and it works great with a large variety of IoT devices (the great app being the backbone of the SmartThings hub).

And that it actually one of the main selling points of the Samsung Connect Home, because it not only acts as a WiFi mesh system, but is also allows the user to connect all its smart devices without having to rely on separate products (it basically took all the functionality of the SmartThings).

But, it’s not hard to see that this is an experimental device and there may be some concerns whether Samsung has managed to properly integrate the convenience of a smart home hub along with a WiFi system’s ability to cover every corner of the house with WiFi, especially since other manufacturers have either failed to enable their IoT-specific technologies (such as the case of the Linksys Velop), dropped it afterwards (the Google WiFi), but most, if not all WiFi systems have still decided to keep their compatibility with an external smart home hub. That being said, let’s see if Samsung has found the winning formula.

Design
While Samsung is mostly known for its great performing smartphones which are usually better looking than the devices from the competition, it was a lot less daring when it designed the Samsung Connect Home, so the system ends up looking very similar to both the Google WiFi and especially to the Eero (either the first or the second generation – they look basically the same). I won’t really judge them that hard for choosing an already successful formula, but the whole point of the new WiFi systems was to break out of the traditional router blueprint and deliver a simple and unconventional design approach (they don’t need to copy each other).

But, I guess the small form factor and the neutral look was what Samsung was aiming at while creating the Connect Home, so each of the three available units in the pack feature a small and compact case, with soft rounded corners and the entire device is covered by a white matte finish (which does not retain fingerprints).

The three Samsung Connect Home units are identical, each measuring 4.72 x 1.16 x 4.72 inches, so you won’t have any problem positioning them anywhere in a room and, taking into consideration the unobtrusive nature of the devices, it won’t attract too much attention, so it is living-room friendly (something that every WiFi system strives for). Furthermore, every Samsung Connect device weighs 0.46 lbs, so they’re lighter than the Google WiFi and the Eero 2nd Generation, but there is a silicone ring on the bottom side which does a valiant job at keeping the devices from budging (it is still advisable to keep it out of the highly trafficked areas in your house).

One thing that has surprised me and I wasn’t expecting to see in such a small device is the addition of four sets of ventilation holes positioned on the bottom of the device which gets to show that Samsung took seriously the bad effects that overheating could have on the internal hardware over larger periods of time (the Google WiFi and Eero decided not to break the design continuity with ventilation cut-outs, but TP-Link Deco M5 has taken similar measures and has also added lots of vent holes on the bottom of every device).

So, as expected the Samsung Connect did not overheat and maintained a proper temperature even while conducting stress tests, but, you should still keep every device in the open and make sure not to cover the ventilation cut-outs (and no, the Samsung Connect cannot be mounted on the wall or ceiling). As a side note, besides the Connect Home, Samsung has also released a more powerful system, called Samsung Connect Home Pro which has a built-in fail-safe fan which activates if the temperature of the Pro system exceeds 131 degrees Fahrenheit (a similar approach as the early version of the Linksys WRT1900AC, which has been removed afterwards since, apparently, the device didn’t really need it). 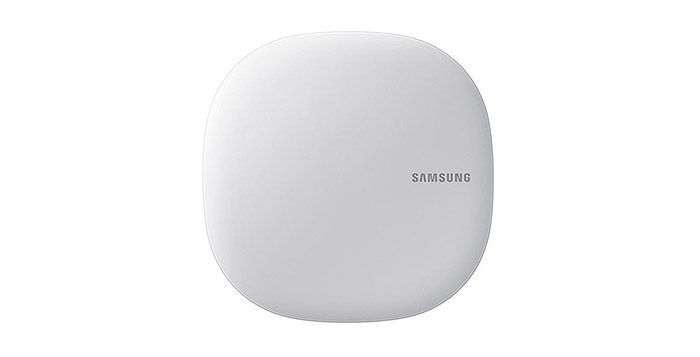 The new WiFi systems have put a lot more value on the design simplicity (especially when compared with the traditional routers), so a lot of ‘unwanted’ elements have been either stripped or simplified to make the new breed of networking devices less intrusive. One such element is the array of LED indicators which had the role of individually showing a specific status of the router or network which is now replaced by a single LED light. Some manufacturers decided to put a ring either around their device (Google WiFi) or on top of it (Netgear Orbi), while others opted for an easy-to-miss small single LED which will change colours depending on the status of the network or system (Eero and TP-Link Deco M5).

The Samsung Connect Home falls in the latter category, so the single LED indicator can be found shyly shining on the opposite side of the ports area: if it is solid green, then the device is powered on and it is working properly, but, if it flashes green, then the device is either booting up or it is resetting to factory default settings; if the LED indicator is flashing green and red, then it is waiting for devices to connect and, if it is flashing only red, then, it has encountered an error.

On the rear side of a Samsung Connect unit, there is an AC/DC adapter connector (the manufacturer decided to steer clear the USB type-C port implementation, unlike other recently released WiFi systems), two Gigabit Ethernet LAN ports (all units are identical, so you can choose whichever you want to connect it to the modem – that unit will have only one LAN port, while the other Samsung Connect routers will still have two LAN ports) and a recessed Reset button. While I understand that it would have been a bit difficult to cram more ports on such small devices, I feel that the sweet spot is at four LAN ports (although the more, the better).
Note: Inside the package, the user can find three Samsung Connect Home units, three Ethernet cables, three power adapters and a Quick Start Guide.

Hardware
Samsung has built the Connect Home on the same Qualcomm platform as Google WiFi, Eero Second Generation, Linksys Velop and Netgear Orbi, so every unit is equipped with an IPQ4019 SoC (quad-core, clocked at 710 MHz), 512 MB of RAM (Samsung K4B4G1646E-BYK0), 4GB of flash memory (Samsung KLM4G1FEPD) and a Qualcomm Atheros QCA8072 Switch chip. The Samsung Connect is a dual-band WiFi system, so, the 2.4GHz radio uses the Qualcomm IPQ4019 chip, as well as the 5GHz which also takes advantage of Qualcomm IPQ4019 chipset. 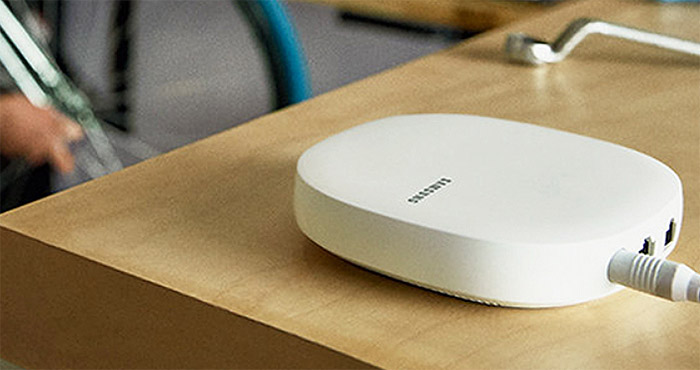 Features and Performance
Samsung has mainly advertised its Connect Home system as a home hub, more so than a WiFi mesh system and that’s because this device is in a way the soul successor of the SmartThings 2, which means that the Connect Home can do everything that the smart home hub could do and more. The greatest appeal of the SmartThings was the compatibility with a wide array of the IoT devices, which is definitely a great feat since, unfortunately, these devices are extremely diverse and each manufacturer wanted to create its own standard instead of playing nice to each other.

To accomplish that, Samsung included the most popular IoT-focused radios (as can be seen in the Hardware section), but the backbone of the hub is the app and, more specifically, the API that allowed the developers to create device handlers for their products which would then be ported to the SmartThings hub. To find the complete list with all the compatible devices visit: https://www.smartthings.com/products.

Besides the broad compatibility with a lot of smart devices, the Connect Home is still a full-fledged WiFi system that takes advantage of some interesting 802.11ac Wave 2 features, as well as the now-popular mesh technology. Of course, neither Samsung, nor the other WiFi systems are the first to have ported the already existing mesh technology to the consumer market (that credit could be given to Open Mesh or Ubiquiti), but these devices are the ones that made this tech popular and to have successfully implemented it in such a way that it could fix the wireless dead zones problem that a single-unit router could not, no matter how powerful. The mesh technology is a necessity because it allows the user to roam seamlessly from one system unit (node) to the other and this is accomplished because the Samsung Connect Home units behave like nodes in an interconnected network, each device communicating to each other and, depending on the distance, signal strength, used channels, the number of connected clients (and more), the data is being guided from node to node through the best and most convenient path available.

So, the mesh network is self-optimizing, which means that all the nodes will act as one entity and it will choose the best roads for the data (as well as maximizing the bandwidth capacity of the network) and, in case the user adds an additional node to the network, it gets automatically detected and new routes are automatically created for the data to reach the destination even faster than before (the self-forming propriety). Furthermore, in case a node fails, the nodes which were connected to it will detect that they can no longer create paths towards the dead node and will reorganize using the existing units to ensure that the user will not experience any downtime and the network will continue to function as before (albeit, at a lesser capacity). The mesh technology solves the inter-node connectivity, so all the Samsung Connect Home has to do is figure out how to handle the backhaul traffic. 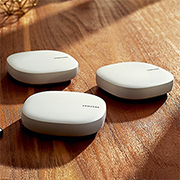