The Asus RT-AC88U and the Netgear X4S are two of the most popular routers released in the last couple of years, both suitable for more demanding home networks (such as larger houses where there are lots of wireless clients), while also featuring some advanced technologies that will cater to the gaming community. The Netgear Nighthawk X4S is a necessary successor of the Nighthawk X4 since Netgear wanted to deliver a device which not only allowed its users to take advantage of the MU-MIMO technology out-of-the-box, but it also added support for the 160 MHz bandwidth mode (implemented as 80MHz + 80MHz).

At the same time, the Asus RT-AC88U is part of a long time favourite series of gaming routers on which users would often rely when they needed a powerful device that would promise an uninterrupted online gaming experience (or any other type of streaming). It is also worth taking into account the AsusWRT-Merlin custom firmware that manages to solve some of the instabilities that the Asus routers are sometimes guilty of.

That being said, both the Netgear Nighthawk X4S and the Asus RT-AC88U are still able to provide a reliable alternative to the WiFi mesh systems (that challenge the concept of the one-unit routers) and, while not cheaper when compared to a stand-alone WiFi system unit, each of these routers are able to cover a lot more ground and deliver a better wireless performance, so, without further ado, let’s see which of these devices is the better one.

Design
The wireless router was never supposed to be a fashion statement, but just simple networking hardware that the user configures once and then forgets it in a corner of the room (the more hidden, the better). This unwritten law has been followed by almost every manufacturer (with very few exceptions, such as D-Link, Apple or Google) until the WiFi systems took the router from its industrial state and made it living-room friendly, by adopting a more minimalistic design approach, while also keeping the devices as small as possible.

Neither the Netgear X4S, nor the Asus RT-AC88U cared much about elegance or minimalism and they made sure that the user knows that they’re looking at a powerful router by pushing some aggressive design lines and, in the case of Asus, it used red colour accents, which are usually specific for gaming-related devices.

That doesn’t mean any of the two devices lack a premium feel, on the contrary, the Netgear Nighthawk X4S R7800 features a solidly built plastic case, covered by a black matte finish (which does not retain fingerprints) and, similarly to its predecessor, the Netgear X4, it has kept the stealth-plane inspired look that first appeared with the R7000. Furthermore, besides the sharp angles, the X4S has two antennas rising from the rear side and the other two antennas are positioned on the lateral sides of the router. if you take a look at the likes of the Google WiFi or even the larger Orbi and Velop, you’ll notice that the footprint of the Nighthawk X4S is huge in comparison, measuring 11.2 x 7.2 x 1.9 inches and weighing 1.85 lbs, which, along with the bottom side feet, will have no problem keeping the device from budging no matter the number of connected clients.

If you thought the X4S was quite large, well, the Asus RT-AC88U is even larger, proudly boasting 11.8 x 7.4 x 3.3 inches (not taking into account the four large antennas positioned in the same way as the X4S) and it is also a lot heavier, weighing 2.6 lbs, so once again, you don’t have to worry about it moving around as you connect all the ports.

In terms of the design, the RT-AC88U follows a similar approach to the X4S, sporting a flat plastic case with sharp angles and covered by a black matte finish (the plastic is soft to touch and, surprisingly, it does retain fingerprints, up to a certain degree). But, while the X4S has a flat top side, the RT-AC88U went for an angular wave-like pattern, with a triangle cut-out that eats up a significant part of the top surface and which has both an aesthetic role (within the triangle, there is a circuit/branch-like pattern which reveals red accents of colour) and it’s a means to help keep the device cooler. 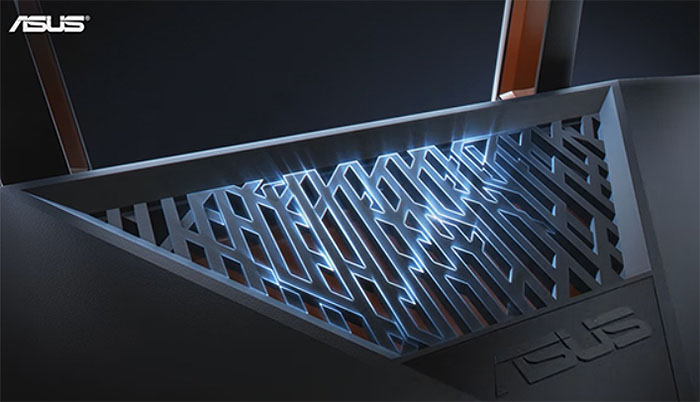 Additionally, on the front of the RT-AC88U, there’s a similar cut-out with the same type of pattern, which also facilitates a better heat management and, if we add the vent holes at the top of the rear positioned ports, as well as those on the bottom and the lateral sides, we get a properly ventilated device which won’t overheat even under a heavier stress. The Nighthawk X4S is a little bit more conservative, but still has enough cut-outs all around the case to also keep the device at a reasonable temperature (the lateral sides and the front are filled with lots of small cut-outs, as well as the bottom area and the rear side, immediately underneath the ports).

Besides the general shape and the antenna positioning, the NETGEAR X4S and the Asus RT-AC88U also have in common the LED light positioning. So, underneath the Netgear logo, towards the front of the router, there is an array of eleven LED lights (and two buttons that masquerade as LEDs) which show the status of the router and the network: the Power, the Internet, the 2.4GHz network, the 5GHz network, the first USB 3.0 port, the second USB 3.0 port, the eSata port and the four LAN ports (the last two buttons have the role of turning On or Off the WiFi and for the WPS pairing).

The Asus RT-AC88U has also positioned its eight LED indicators underneath the logo and towards the front side, having the role of showing the status of the device: Power, the 5GHz and the 2.4GHz WiFi networks, Internet, the eight LAN ports, the USB 3.0, the USB 2.0 and the WPS. It’s refreshing to see that you don’t have to keep on relying on a manual to understand the different colour states of a WiFi mesh system, but both the RT-AC88U and the X4S R7800 had to sacrifice a bit from overall look in order to fill the top side with blinking LEDs.

Verdict: If you’re looking for an elegant device which will sit nicely in a living room, well, none of them fit the bill, but, if an aggressive looking router that prides itself with its size and design is what you’re looking for, then both the Asus RT-AC88U and the Netgear X4S are the perfect matches. Choosing the better device from the design point of view may seem a bit difficult at first glance, since both have a similar design, both have four detachable antennas and each device can be mounted on the wall in case the large footprint is an inconvenience, but, while the Netgear X4S has four Gigabit LAN ports, the Asus RT-AC88U allows eight wired client to be connected, so it wins this round.

Asus has choosen a bit different and went with the Broadcom platform, therefore being equipped with a dual-band BCM4709C0 CPU clocked at 1.4GHz (be aware that while four ports use the BCM4709C0’s built-in switch, the other four ports use the Realtek RTL8365MB), along with 512 MB of RAM and 128 MB of internal flash storage. Furthermore, both the 2.4GHz and the 5GHz radio bands use the BCM4366 4×4 SoC. Neither of the two devices has taken into consideration operating and behaving as a smart home hub, so there are no relevant technologies for connecting IoT devices (except the good ol’WiFi). 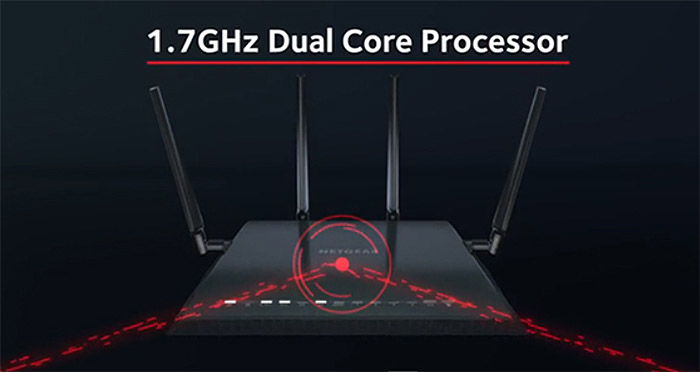 Verdict: Each of these two routers is associated with gaming, so it is implied that both should feature a great wireless performance delivered by powerful hardware. It’s also clear that even if they choose different platforms (each has its own advantage and disadvantage, but generally neither seems to be above the other), both the RT-AC88U and the X4S are very capable devices, but I won’t ignore that the X4S seems to have a more powerful CPU, so it wins this round.

Features and Performance
The Netgear X4S and the Asus RT-AC88U are devices that appeared before the WiFi mesh systems really had a chance to take off and to manage to pose a serious threat to the one-unit device in favour of a multi-unit setup (which it does, now). So, as expected, neither of these routers needs the mesh technology since their main point of existence was to cover a large house with WiFi by themselves, without the need of an additional identical router or a repeater. To do so, both Asus and Netgear took advantage of some of the most interesting 802.11ac Wave 2 features. 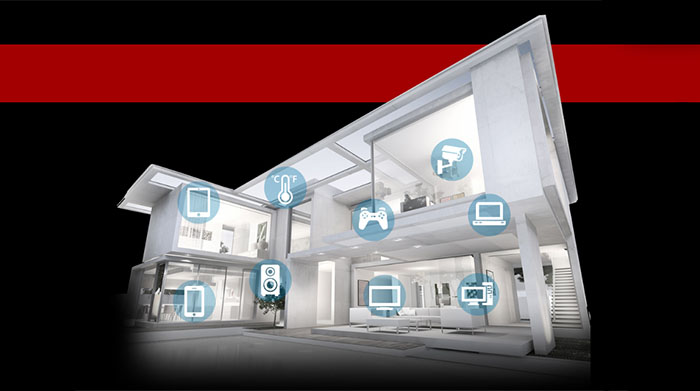 The RT-AC88U and the X4S pride themselves with the support for the MU-MIMO technology and, actually, one of the main reasons that the Nighthawk X4S exists at all was for Netgear to build a 4×4 router and possibly to differentiate itself from the X4’s second generation deal with the late activation of the MU-MIMO technology (the X4S could, in truth, be considered the third version of the X4, but, if they went that road it would have just annoyed the customers).

The MU-MIMO technology promises to change the way traditional routers worked, when all the clients had to compete for the bandwidth and only one could be served at a time, so now, with this relatively new tech, the router can serve multiple clients at the same time, so the user will see a better wireless performance. But, as said many times, you need to have devices with compatible wireless adapters in order to take advantage of this feature and, while the people were promised that the MU-MIMO technology would become widespread as soon as possible, allowing them to take advantage of its cool properties, the change still happens very slowly and only a few devices have included the MU-MIMO support into their datasheet and usually in the 2×2 form (furthermore, it seems that the technological world shifted to other pursuits, such as the IoT smart home features). 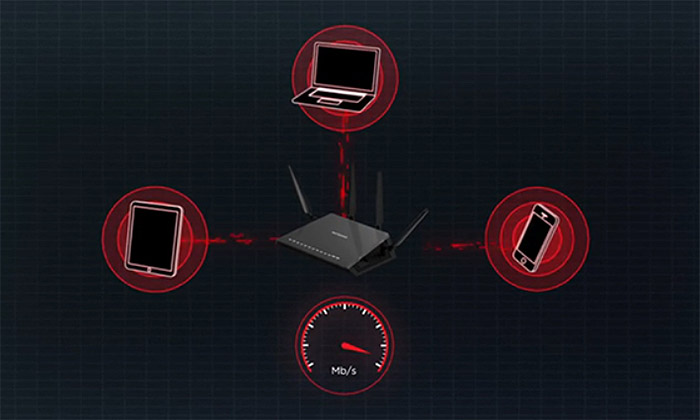 As a useful application, the MU-MIMO is used by the WiFi mesh systems to facilitate a faster and better communication between the nodes, so, if you need an additional access point inside your home, along with either the Asus RT-88U or the Netgear X4S R7800, investing into a MU-MIMO capable AP could be a great decision.
Furthermore, both routers also take advantage of the BeamForming technology (Asus calls it AiRadar, while Netgear has named it a bit more generically, BeamForming+) which has the role of focusing the signal towards the compatible devices that are connected wirelessly instead of broadcasting the signal everywhere with the hope that it will reach your clients (this way, the user will experience a better and stronger WiFi signal).