The Synology MR2200ac is the third wireless router released by the Taiwanese company (very popular world-wide especially for its NAS line) and this time, we’re dealing with a tri-band WiFi mesh-capable device. With the launch of the 802.11ax WiFi standard, I noticed that the release rate of new mesh systems has significantly slowed down (the market felt saturated or there’s a bit of reluctance into forcing the market to the WiFi 6?) and, since I already had a look at the Synology RT1900ac and the RT2600ac, I was eagerly waiting to see when Synology would cover this networking segment as well.

Still, the MR2200ac feels a bit undecided about its identity, since it is available as a single-device package-only and it didn’t fully adopt the minimalist design, instead looking more like a router than the regular mesh node. Despite that, the MR2200ac seems fully capable of creating a mesh network using multiple identical units and it allows you to add the dual-band RT2600ac as a mesh router as well (one of the two 5GHz radio bands of the MR2200ac is dedicated for backhaul). 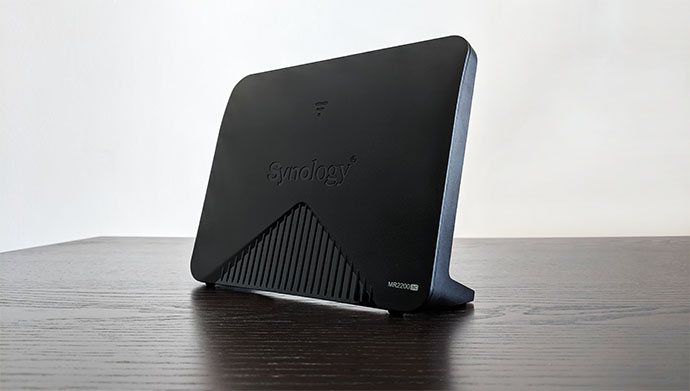 Furthermore, the MR2200ac uses the same iconic SRM interface (now including advanced Safe Access features) and it is an early adopter of the WPA3 security standard, so let’s have a closer look at the MR2200ac and see how it functions as a stand-alone wireless router, as well as within a mesh system along with the Synology RT2600ac as the main unit.

Design
As I said in the introduction, the Synology MR2200ac seems to have a bit of an identity crisis since it is halfway between the traditional router (with its characteristic big rectangular body) and the living-room-friendly minimalist mesh node. More specifically, the router features a rectangular case with rounded corners, but, unlike its predecessor, the device now sits vertically with the aid of two built-in feet (unlike the RT1900ac, the MR2200ac can only be kept vertically – it also can’t be mounted on the wall or ceiling). Almost the entire case is covered by a black matte finish (the soft coating does retain smudges, but they’re not really noticeable), while, on the front, besides the carved in glossy Synology logo, the device has a triangle shape divided by multiple glossy sections. On the top surface, the Synology has added multiple cut-outs which should facilitate a better air flow, but you’ll also notice that there are no antenna connectors. 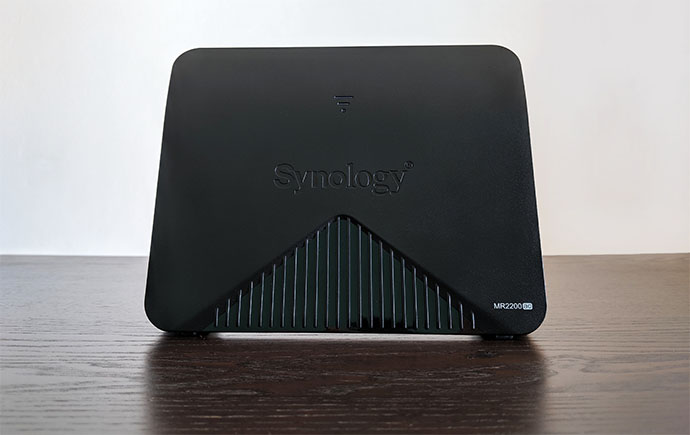 That’s because the MR2200ac does not have external antennas: this and the relatively small form factor case (it measures 6.0 x 7.8 x 2.5 inches HxWxD) suggest that the manufacturer still has adhered to a somewhat minimalist approach, but, because of the design of the front surface, the MR2200ac actually ends up looking a bit retro. Despite being positioned upwards, the Synology MR2200ac cannot be tipped over easily because of the two elongated feet, but also because of the low center of gravity (the device weighs one lbs and it is heavier towards the bottom); additionally, on the bottom of the two feet, there are two small silicone pads (on each foot) to keep the router from budging and, while the pads didn’t look like much at the first glance, they have proven to be quite effective.

A tri-band router with a small case is usually more prone to overheating and to prevent it, Synology has added lots of ventilation holes on the rear side of the device, as well as on the bottom. To see how effective the passive cooling is, I put some stress on the router and, while it did get warm towards the middle, the device showed no signs of overheating.
Note: On the rear side, within the area with ventilation cut-outs, there is a label with various information about the device (such as the MAC address, the Serial No, the PIN code, the default WiFi SSID and password). 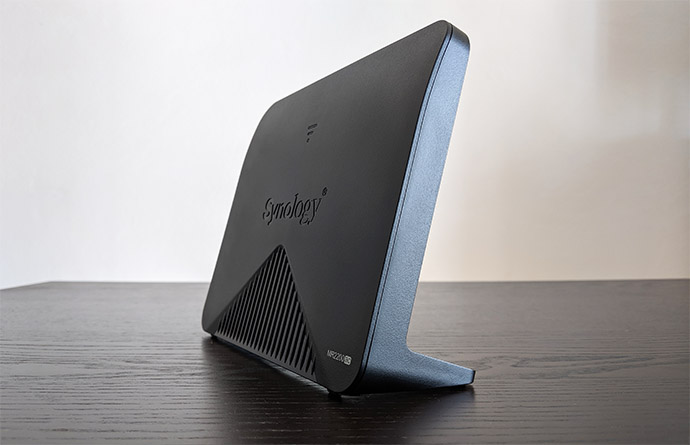 When put next to the RT2600ac, the MR2200ac doesn’t have that many similar design elements (except for the carved in logo and the black matte finish) and, while both the RT1900ac and the RT2600ac had a series of LED indicators positioned on the top or front surface, the Synology MR2200ac has three LEDs aligned to resemble the WiFi symbol: the bottom LED will light up blue when the device is powered on and it’s ready to be configured (afterwards, it will turn solid green), while the two upper LEDs show the status of the WiFi (if the LEDs are flashing blue, then the MR2200ac is ready to connect to other devices, otherwise, if one or two LEDs will become solid green to show the signal strength for the connection to the primary router). I’m not a fan of the single LED indicator that almost all WiFi mesh systems seem to favor since I don’t find it intuitive and, while the MR2200ac doesn’t fully embrace this approach, it still doesn’t show enough info using its LEDs (to better see the status of the network, you’ll have to check the app or the web-based UI).

On the rear of the MR2200ac, Synology has added a USB 3.0 Type-A port (useful for either a storage device or USB printer – the SD card slot from the RT2600ac is gone) on the left side along with a small WPS buttons and a WiFi On/Off button, while on the right side, there is a single Gigabit LAN port (another similarity to some WiFi mesh routers which I’m not really a fan of considering that not all the devices are wireless and the port will most likely end up being used for the Ethernet backhaul), a Gigabit WAN port, a Power port, a Power button and a recessed Reset button (press and hold for 10 seconds to return the router to the factory default settings). 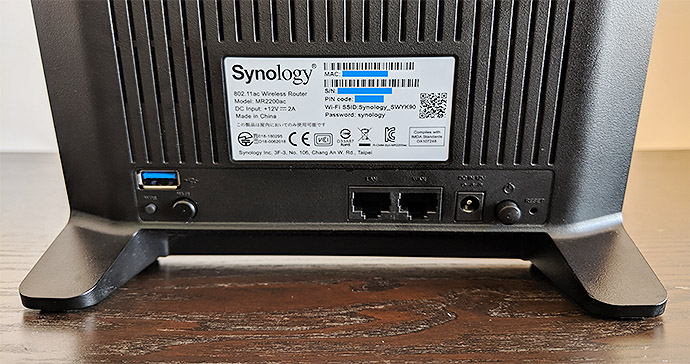 Features and Performance
The MR2200ac decided to add a second 5GHz band to make it easier to handle both the clients and the inter-node traffic, therefore aiming at creating a more stable mesh network. But, unlike the other ‘dedicated’ mesh system (with multiple identical nodes in the package), the MR2200ac didn’t seem like it wanted to push the user towards immediately purchasing multiple mesh routers. I found this approach strange at first, but afterwards it kind of made sense because Synology seems to want the users to experience the unique interface and the stable network that its routers can create which should be enough to persuade them to want to further expand their network with additional mesh nodes (although it’s worth mentioning that multiple routers in a package usually means a discount). 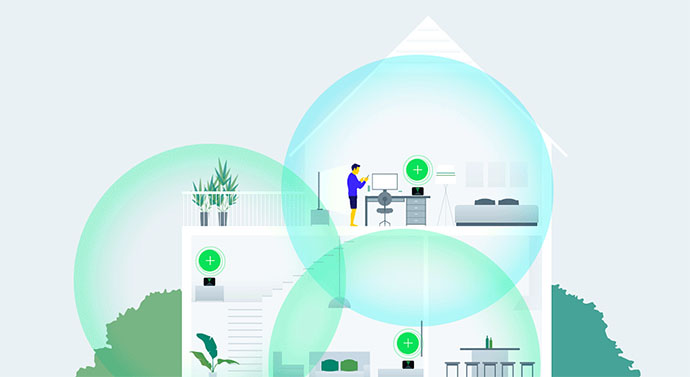 It’s also a great way to reuse any already purchased RT2600ac (can be added to a mesh network), but, while I see the similarities to the Asus AiMesh, Synology didn’t include the older RT1900ac, so, unlike Asus, it has nowhere near the wide variety of routers capable of becoming a mesh node – also, the RT2600ac can only be used as the main router with the MR2200ac as the secondary node.
The setup that I have available includes one Synology MR2200ac and a RT2600ac, but you can also use multiple MR2200ac devices to create a full tri-band mesh network. 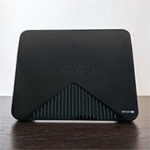