The problem with Synology was the fact that it had only two available routers, which meant that some users feared that the manufacturer may not continue to find the consumer networking market worth pursuing and that’s when the support will end. Fortunately, this clearly wasn’t the case and Synology hasn’t shown that it has any intention of exiting this market any time soon, quite the contrary, as seen with the release of the new WiFi system (by implementing a similar approach to Asus with its AiMesh or how Google did with the Google WiFi and the OnHub routers).

In order to test the wireless performance of the Synology RT2600ac, I took two powerful computers (one acting as server, the other as the client – the former is connected via a cable, while the latter is equipped with a PCE AC88 wireless adapter, so it’s connected wireless) and, after I completed the initial set up and created the network, I added the wireless client and measured the speed performance at different points inside the house.
Note: I have retested the Synology RT2600ac using the same two computers in a new location (I will mention the old results as well). 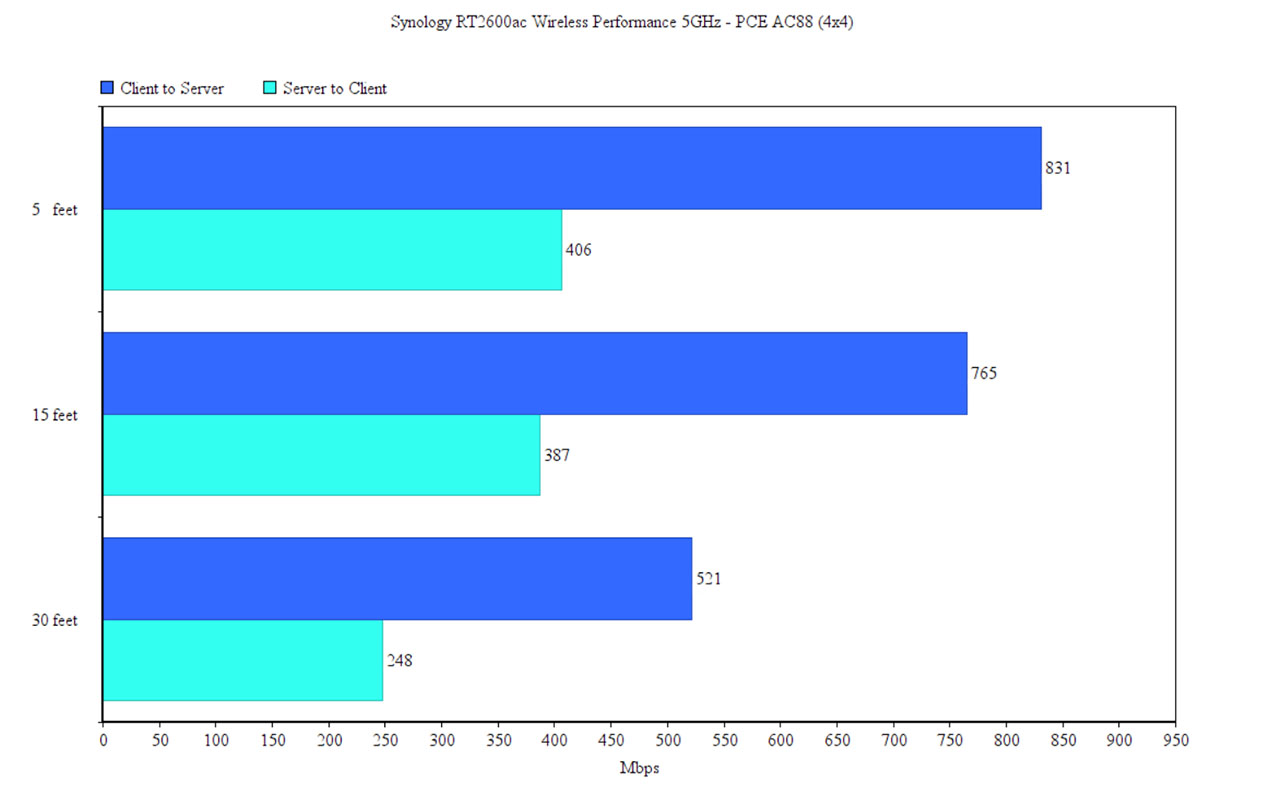 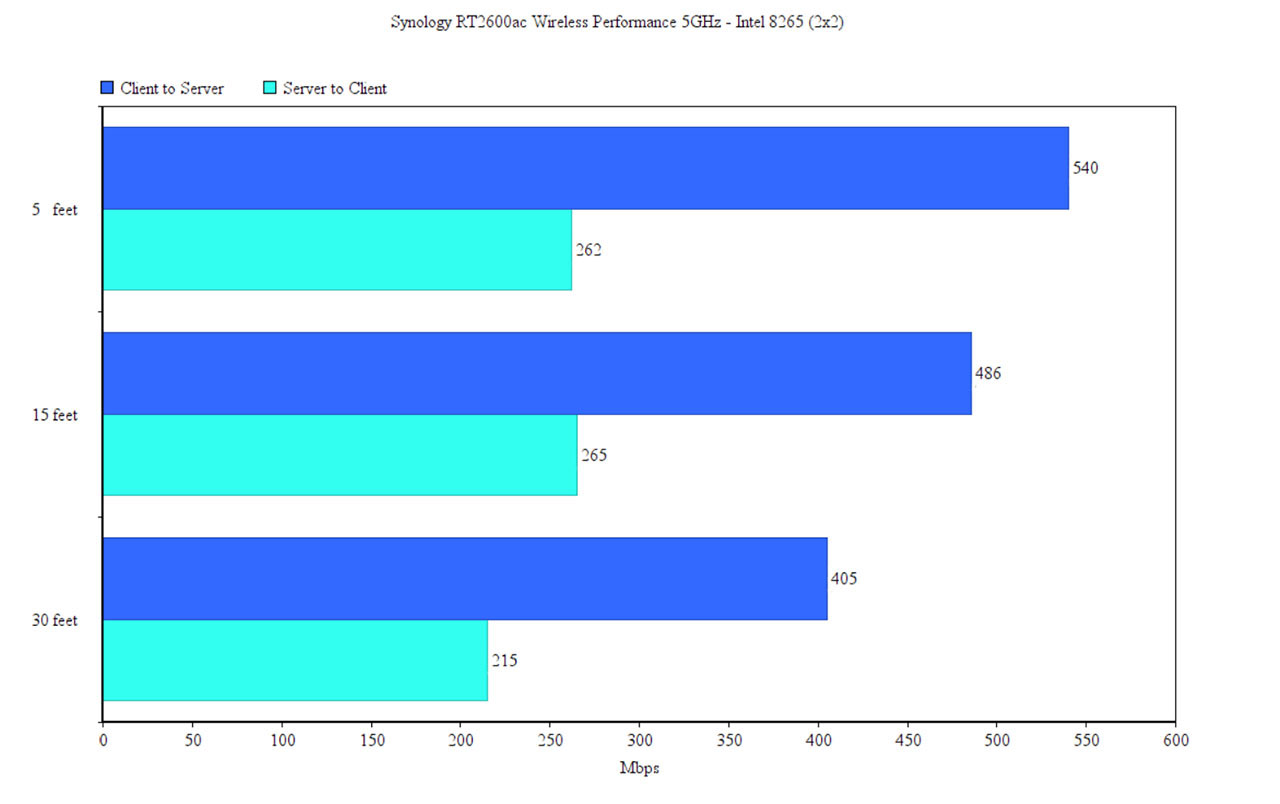 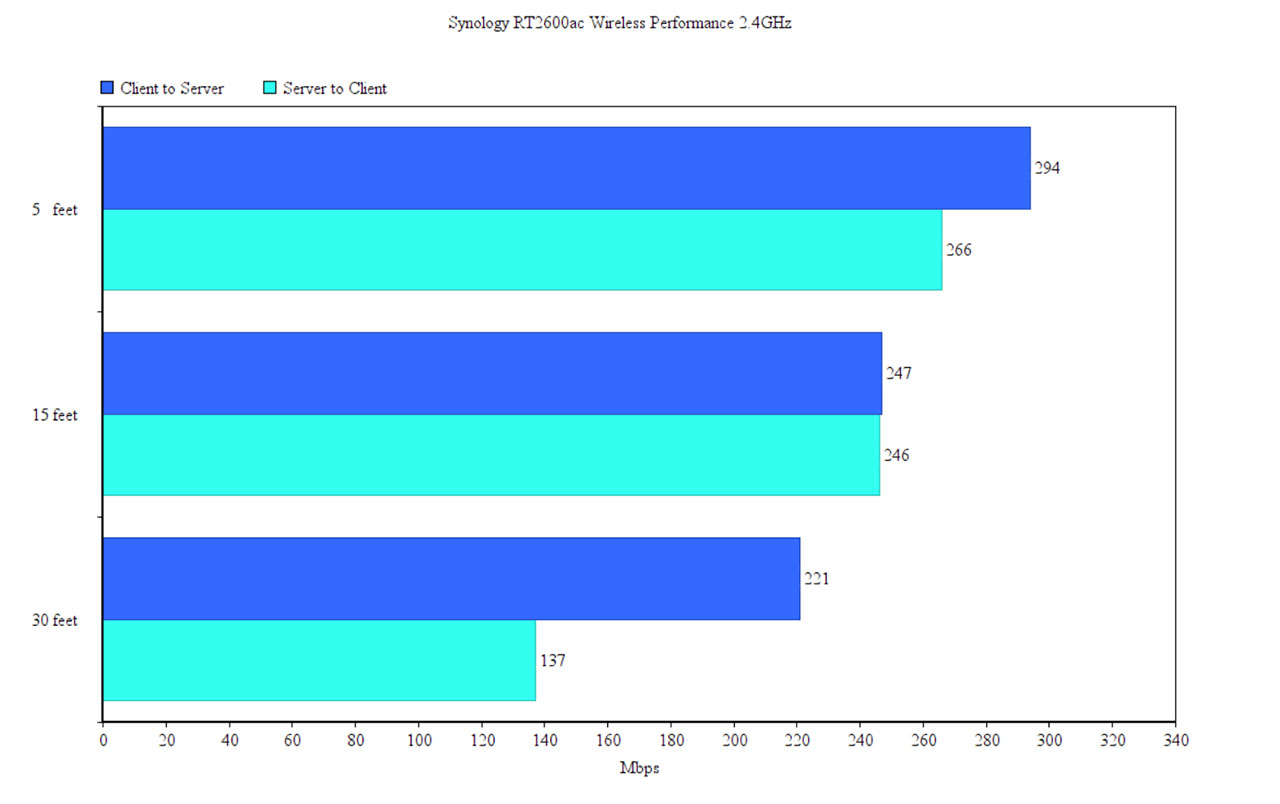 UPDATE: More than a year ago, Synology tried to implement the Intrusion Prevention add-on which, when I tested the router was still in beta stage and it did took up to 10 percent out of the speed performance (some users have seen more dramatic speed reductions). The reason for this was because the feature used a spooler for the threat detection engine output data (Suricata open-source IPS engine) and this process required more CPU power. Synology left the old spooler behind and created their own efficient version, it also fine tuned the packet analysis and detection and it changed the priority of the CPU and I/O to normal, so, in case the network gets busy, you would not see a degradation in the throughput. This way, Intrusion Prevention became Threat Prevention, a feature which is now a lot more efficient and will still allow close-to-Gigabit speeds on an Ethernet connection.

On the last step, I decided to connect a powerful USB driver to the USB 3.0 port (a Patriot drive) and, after I disabled the ‘Downgrade USB 3.0 device to reduce interference to 2.4GHz signal’ option, I measured an average of 88 MBps for reading a 3.4GB multimedia folder and around 34 MBps while writing the folder – this is a significant upgrade over the storage performance of the Synology RT1900ac. 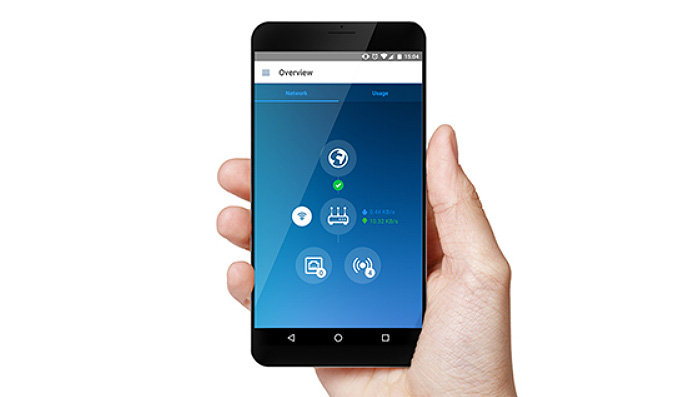 You can configure and monitor the Synology RT2600ac using either the web-based interface or using the proprietary Synology DS Router app. Since most router manufacturers decided to give into this new trend and added an app besides their main user interface (while some decided to completely remove the traditional web-based UI), I thought to try using the mobile app for the initial configuration. To do so, I downloaded and installed the app and after I ran it, I was asked if I wanted to Setup a new router or Manage existing router (I chose the former and, after searching the area for the router, the RT2600ac was detected) .

This time, the app didn’t redirect me to the browser based UI and I could finish the initial configuration process in the app. To do so, I pressed Start and from here, I was asked to create an Administrator Account (username and password), to create a WiFi Network (country, SSID and passkey), to choose the Operation Mode (Wireless Router or Access Point) and insert the Network Settings (provided by the ISP). After that, I had to wait until the Synology router was ready (it should take less that 3 minutes – the entire set up will take less than 10 minutes) and after the configuration was finished, I could explore the app interface and, for a more in-depth configuration, you can access the web-based interface. 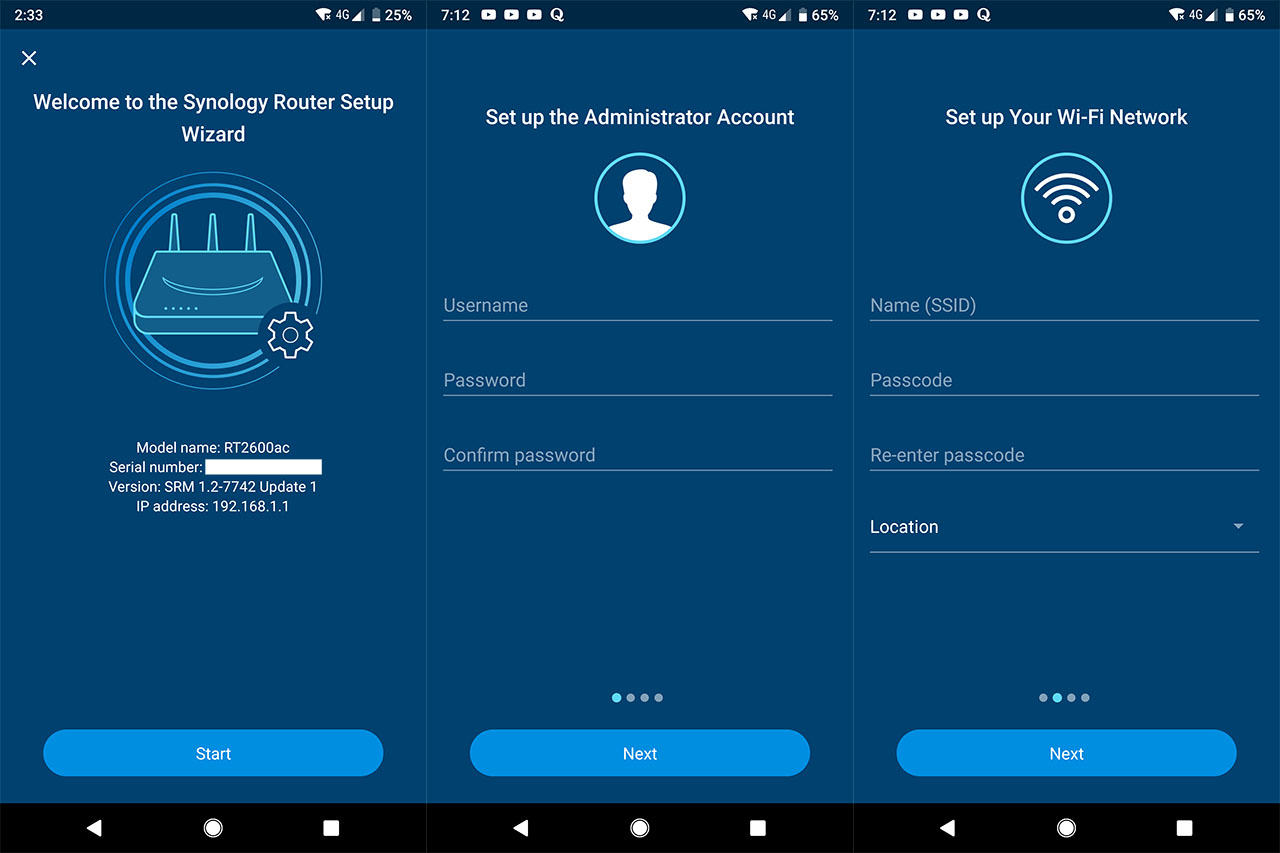 The Synology app features a main Overview page which displays a graphical representation of the Network and, if you swipe to the left (to go to the Usage section), you can see the upload and download speed in real-time for each connected device. The Network section consists of the Internet icon (tap on it to see the status of the IPv4 and the IPv6 connections), there’s the Router icon (tap on it to summon two additional icons: WPS and LEDs On/Off – if you connect a USB hard drive or an SD card, you will be able to see a third icon to give you an easy access), the WiFi icon (tap on it to quickly gain access to the settings of the Wi-Fi and the Guest Network) as well as the Wired and the Wireless connected devices (tapping on either icons will display the Traffic Control and Signal Strength of each device and, by tapping on any of them, it will give you the option to change its priority or add it to the Banned list, which can only access the internal local network).

UPDATE: The application has evolved over the years and some new features have been added to the UI.

Besides the Overview page, you can also visit other areas by tapping the three horizontal lines on the left (menu), where you can see a new section, the Network, which includes the WiFi settings (WiFi and Guest network) and the WiFi Point (here, you’ll be able to see all the Synology routers that are part of the mesh network and view a graphic Network Map). Next, there’s the Devices section which includes the Safe Search (replaces the Parental Control) which allows you to create a new Profile by select some preset settings (suitable for a child, adult or specially created for My LAN Network or Guest WiFi) and assign devices to it. 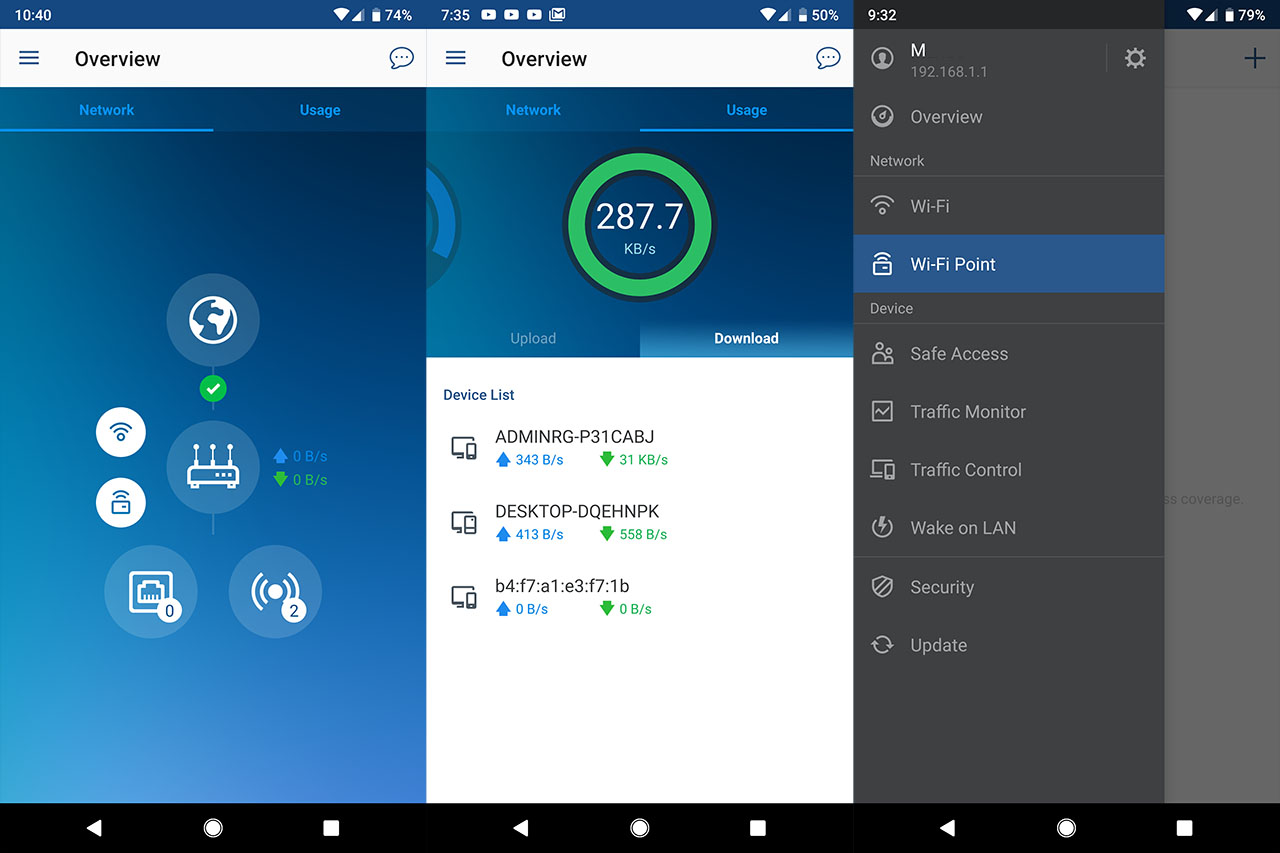 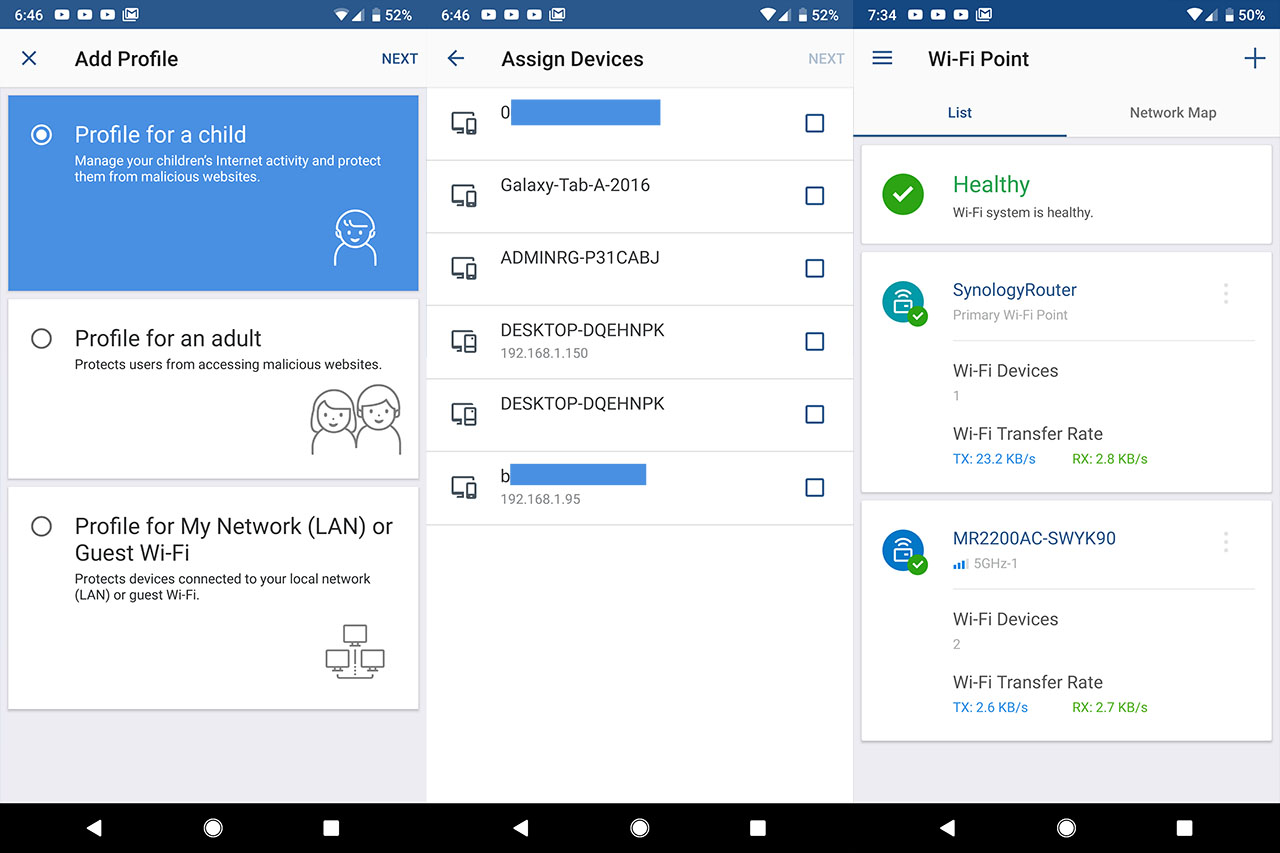 Furthermore, there’s also the Traffic Monitor page (which shows the live traffic, as well as the total traffic), the Traffic Control page (which can also be accessed from the Overview section), the Wake on LAN, Update and Security (includes Port Forwarding, Firewall and IP Blocking). So, the mobile app covers pretty much everything that the regular user would need but, if you want the full experience, you need to use the browser-based interface. After switching to the web-based UI, immediately after you open up the SRM OS, you can see that it does not have much in common with the usual user interface found on the other routers from the market. Instead, you get welcomed by that familiar Windows OS Desktop-like look, with six icons positioned on the left side (Network Center, WiFi Connect, Safe Access, Control Panel, Package Center and SRM Help) and a taskbar positioned on the top (which contains some additional shortcuts, such as the File Station, the Log Center, the Network Tools, the Security Advisor and the Support Center).

If you click on any of these icons, you’ll notice that it opens a smaller window, therefore allowing you to open up multiple windows at the same time (each of them will have their own quick access icon on the top taskbar). Furthermore, you can also drag and drop these icons on the ‘Desktop’. Besides providing the same feel and flexibility of the Windows OS, you can install Add-on packages to further improve the way the router functions and performs.

To do so, you need to access the Package Center section, where you can see which packages are available and install the ones you need (be aware that there are some Beta add-ons which may not work properly yet). Unfortunately the list of add-on packages is not as vast as I expected, but there definitely are some applications that you won’t find on other consumer-type routers, such as the VPN Plus Server (Open VPN, PPTP, SSETP, Synology SSL VPN, L2TP/IPSec, WebVPN), the Download Station (an app that allows the user to download files from the Internet), the Threat Prevention, Media Server, DNS Server, RADIUS Server, Cloud and the Station Server.

The Network Center offers some similar options as the mobile app, allowing you to see the status of the network, as well as giving you access to (these are now in a separate area) the Port Forwarding (which adds Port Triggering and DMZ), , the Traffic Control, Security (includes General settings, such as DoS Protection and Pass-Through, as well as Firewall, Service protection and Auto Block) and Operation Modes but, the Network Center also has some new sections, such as the Local Network and the Internet settings (allows the user to set the Primary and Secondary Interfaces, as well as Manually configure the DNS server; furthermore, the user can also set up the Smart WAN feature, the QuickConnect & DNS, IPv6 Tunneling, as well as the 3G & 4G dongle connection).

The Control Panel allows you to change the User related settings, access any connected Storage devices, enable File Services (such as Samba, Time Machine, Bonjour Printer Broadcast, FTP Server and WebDAV), enable System Services (such as SSH, SNMP or NTP), configure the Notification services (Email, SMS and Push Service – includes some Advanced settings as well), view and change some Device settings as well as configure the System settings. One tool that I really liked is the Security Advisor, which automatically detects if the system is protected and lets you know what you need to do in order to have a strong network.

Conclusion
The Synology RT2600ac is an interesting device and its uniqueness mainly revolves around the SRM (Synology Router Manager) operating system which offers more than a few powerful networking features (usually found on corporate-type devices), while also immersing the user in a familiar environment. Of course, this is not the only strength point of the RT2600ac, as there’s also the great wireless performance backed by a decently powerful internal hardware (which handles a large number of connections, ), all that at an acceptable price point.

More than a year after I first tested the RT2600ac, I can say that it is now a better device: the app is improved, there are now more features, it is more secure (while also less taxing on the internal hardware), it can now be a part of a mesh network and with the right WiFi adapter, it can deliver a close to Gigabit wireless performance. The conclusion is that the Synology RT2600ac is the best wireless router I have tested so far, considering its price range. 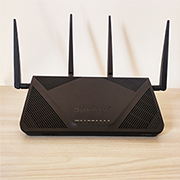