The TP-Link Archer C2300 is one of the latest networking products released this year by the Shenzhen-based company, along with the Deco M5 WiFi Mesh System in an attempt to cover every segment of the WiFi routers market. While I understand why TP-Link quickly assembled the Deco M5, since the home wireless mesh systems are the hottest things right now (and TP-Link had to have its own devices in the spotlight), was the TP-Link Archer C2300 really needed when we have the Archer C2600 available? 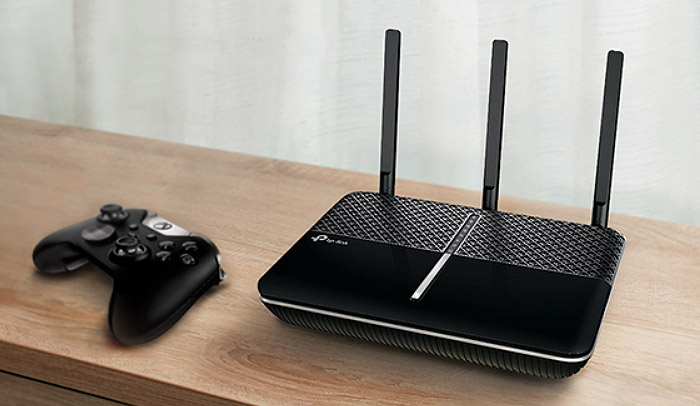 Even if that wouldn’t be the case, the price gap between the older generation of high-end routers (which usually refers to the AC1900 class) and the newer AC2600 and AC2400 (or AC2300) routers is rapidly closing, so, if you’re on the market for a new high-end router with some of the latest technologies implemented, the TP-Link Archer C2300 is a good option (as I always say, the AC2300 to AC2600 is the new sweet-spot for the consumer-type routers).

Design
Unless we don’t count the arachnoid Talon AD7200, TP-Link hasn’t really made that many changes to the design of its latest WiFi routers, only slight adjustments to not look completely identical. That’s also the case of the TP-Link Archer C2300 which is pretty much identical to the Archer VR600 modem router and bears a close resemblance to the Archer C2600. So, it features the same black plastic exterior, with the top side divided into two main parts, one is covered by a black glossy finish and the other is covered by lots of diamond-shaped cut-outs (to allow for a better airflow inside the case), with both parts being vertically intersected by a narrow section (half being dedicated for the LED lights and half is a button for turning the LEDs on or off).

The LED lights show the status of the Power (if it’s flashing, then the system is either upgrading the firmware or the device is starting up, so don’t power it off), the 2.4GHz wireless band, the 5GHz wireless band, the Internet (if the LED is blue, then the Internet connection is available, otherwise, if it’s orange, it signifies that the Internet cable is connected, but there’s is no Internet service), the Ethernet (if it’s on, then at least one device is connected to a LAN port on the router), the WPS (if it’s flashing, then the WPS connection is in progress and it could take up to 2 minutes) and the USB.

Like I said before, the VR600 and the C2300 share the same case (even featuring the same silver band which separates the top and the bottom sides), so it measures 8.5 x 6.5 x 1.4 inches and weighs 2.8 lbs, which sets it apart from the usual bulkier router and makes it quite the compact device. While being unobtrusive is usually an advantage in the networking world, this time, I think TP-Link should have gone with the C2600’s larger case (since it borrowed it from another TP-Link device, anyway) to allow a better heat dissipation inside the C2300. Yes, I know that the bottom is completely covered with cut-outs and half of the top side also allows the air to circulate, the small size may prove to be an inconvenience when under heavy loads, so the C2300 may run a bit hotter than the C2600.

Since it has average proportions and and it is a relatively elegant device, the C2300 can be positioned pretty much anywhere in the room without emanating an industrial feel and, if you’re low on space, you can mount it on the wall using the two dedicated zones on the bottom (the four feet should provide a bit of space between the router and the wall for maintaining a proper airflow).

The back panel of the C2300 is home to the Power port, the Power On/Off button, a Gigabit (10/100/1000Mbps) Internet port, four Gigabit LAN ports and three antenna sockets (the antennas are detachable and omnidirectional). On the left of the device, there’s a WiFi On/Off button (press it for 2 seconds to turn on or off the wireless functionality), a Reset button (press it for more than 5 seconds to return the router to factory default settings), a WPS button, one USB 2.0 port (in 2017, this is underwhelming) and one USB 3.0 port.

Note: TP-Link allows you to combine two LAN ports together for link aggregation to a NAS (to get up to 2Gbps, theoretically).

The Broadcom chip’s performance gets further enhanced by using the NitroQAM technology (1024 QAM modulation), which translates into an increase of up to 25 percent over the traditional 256-QAM (so, there’s a higher throughput using the 802.11ac standard).

Features and Performance
The Archer C2300 has a lot in common with TP-Link Archer C3150 V2, so, in terms of features, it is equipped in a fairly similar way (although we need to take in consideration that we’re dealing with a dual-band, three-stream router). First of all, the C2300 supports the MU-MIMO technology (Multi-User Multiple Input Multiple Output) which should allow simultaneous communication with up to three devices. The traditional way was to serve one client at a time and let the clients compete for the bandwidth, while the MU-MIMO can greatly improve the network’s behaviour and efficiency.

But, there is a drawback: it’s true that the MU-MIMO is one of the best technologies to have implemented in the consumer router, but, most of you won’t really be able to use it at all and that’s because your connected wireless devices need to have a compatible MU-MIMO adapter (and there aren’t that many on the market – those that can be found are very expensive).

The C2300 also makes use of the Smart Connect technology, which has the role of automatically assigning connected devices to the best radio band. The Smart Connect feature is usually associated with the tri-band routers (such as the Archer C3200, the D-Link AC3200 Ultra WiFi DIR-890L/R or the ASUS RT-AC3200), where it would be a pain to have to deal with three separate networks and the need for an easy connection to the three bands takes priority. Of course, this type of dynamic algorithm can prove to be very useful even for a dual-band router: the Smart Connect feature has the role of analysing the signal strength, the distance between the client and the router, as well as spotting any crowded channels and to find the most suitable band for your devices (be aware that, in order to take advantage of either the TurboQAM or NitroQAM, you need to have compatible built-in wireless cards).

The router also supports BeamForming, which has the role of focusing the signal towards the connected clients, instead of broadcasting it everywhere and hope that it will reach your gadgets (once again, you need devices with compatible wireless cards to take advantage of this feature – thankfully, this is more widespread than the MU-MIMO).

As a final test, I verified the storage performance of the C2300 by sending and receiving a 1.5GB folder containing multimedia files: I measured 65.8 MBps for reading the folder and 46.6 MBps for writing it.
Note: For the best storage performance, TP-Link enabled the possibility of using link aggregation by combining two LAN ports, therefore greatly increasing the speed (marketed as up to 2Gbps) if you are a NAS or server owner.

Setup
TP-Link Archer C2300 features a web-based utility which can be reached by either directly connecting the router to a computer using a cable or by connecting wirelessly to the preconfigured WiFi network using the SSID and password provided on the bottom label (you can also go the WPS route). After a connection has been established, open a web-browser and go to https://tplinkwifi.net to create a new secure administrator password. 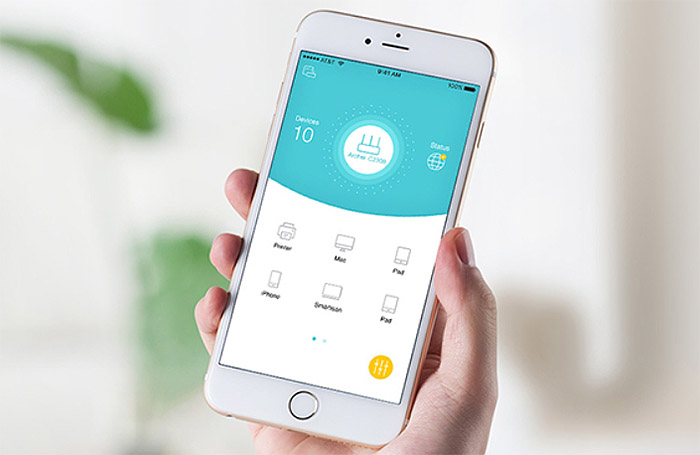 Afterwards, you can log into the interface and access the Quick Setup wizard, which will guide you through setting the Time Zone, the Connection Type (you can use Auto Detect or manually select between Dynamic IP, Static IP, PPPoE, L2TP or PPTP), choose between Cloning the Current Computer MAC Address or not (depends on your ISP), do a basic configuration of the Wireless networks (SSIDs and passwords) and register for a TP-Link ID (for additional Cloud functions).
Note: The Archer C2300 can also be configured using the TP-Link Tether app (needs registering to the Cloud service). 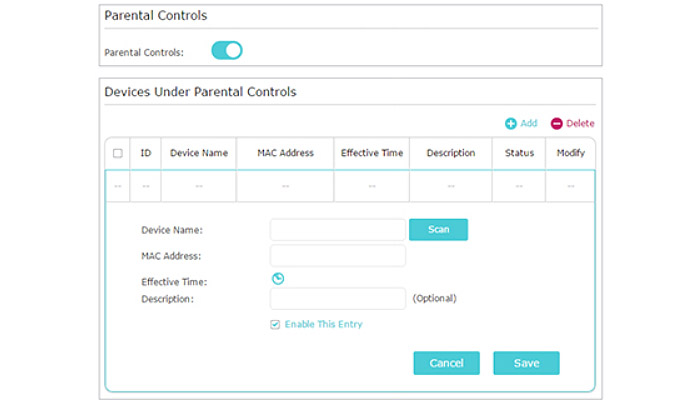 Besides the Quick Setup, the web interface has two additional main tabs: Basic and Advanced. The Basic tab opens a new window with a dedicated vertical menu which shows the Network Map (a graphical representation of all the connected devices to the Internet sorted by wired, wireless and the radio band used, as well as info about the Internet, the Connection, IP address, DNS server and Gateway), allows you to configure the Internet subsection, the Wireless, USB Sharing (Sharing Access and Print Server), Parental Controls (here, you can block any malicious websites and create schedules for when specific websites can be accessed; each connected devices gets a set of rules – such as Content Restriction based on keywords in a whitelist or blacklist), Guest Network (allows you to create 2.4GHz or 5GHz guest networks and allow guests to see each other or give them access to your local network) and TP-Link Cloud. 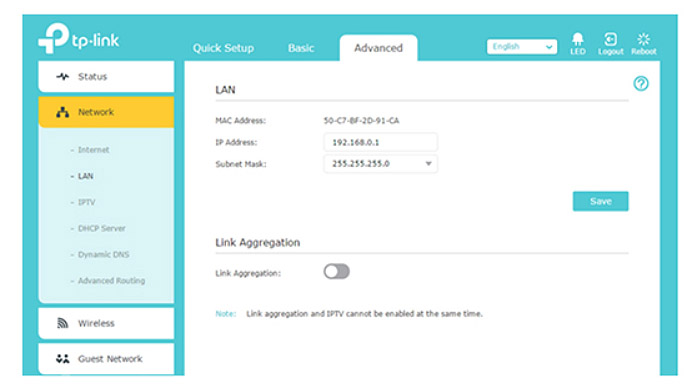 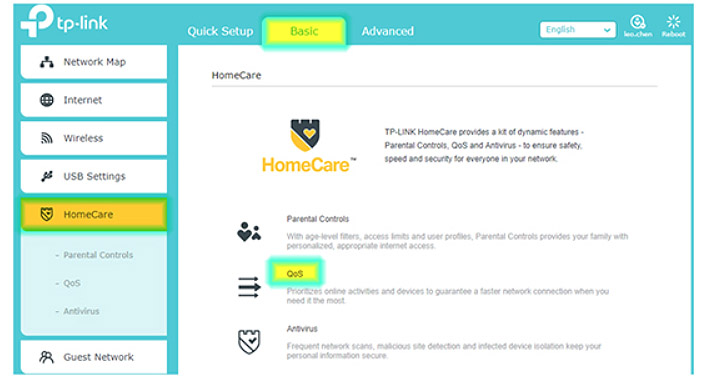 Note: The Archer C2300 supports the HomeCare feature (it gets its updates from TrendMicro), which can be added to your interface by performing a Firmware Upgrade.

Conclusion
It may not be correct to call TP-Link Archer C2300 the successor of the C2600 since it follows a rather different path (it’s more of a budget-friendly Archer AC3150 v2). So it is a very relevant device for 2017, sporting powerful internal hardware, a good wireless performance, a user-friendly interface (although I preferred the previous UI design choice), some of the latest technologies (MU-MIMO, Smart Connect, NitroQAM) and some unique features as well (Link Aggregation for NAT). Couple all this with a reasonable price tag and you get a more than capable router for medium to large sized homes (or small offices). 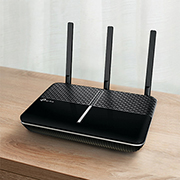