Lately, UGreen has been pushing the boundaries of the GaN and the PD 3.1 technology with the release of the Nexode 140W, but not all people need such a high power output, so, to not neglect the entry-level market, the manufacturer has also made available the UGreen Nexode 45W mini charger.

It doesn’t use the PD3.1 because it doesn’t need it for the 45W power output, but the GaN technology is central to the charger, allowing the use of a smaller case, while also keeping the internal temperature far lower than with the traditional chargers.

The UGreen Nexode 45W charger has two USB-C ports, each being able to provide the maximum output and, while at first glance, it may not seem that much, it can be just the right amount for a smaller laptop, such as the 13-inch MacBook Pro. Sure, it’s going to take a bit longer to charge (in my tests, it seems that the laptop wanted up to 56W at its highest), but then again, you do have the option to recharge another device at the same time as well (smartphone or smartwatch).

And that’s something that the original chargers don’t offer since they’re designed to serve only a single device. The Ugreen Nexode 45W is called a mini charger, but is it really that compact? It is actually very small and at its 1.28 x 1.28 x 1.61 inches, it’s easy to carry in a bag and even in a pocket. The fact that the plug is retractable does help tremendously in this matter, but it’s true only for the US-based plug. Any other type of plug will add quite a bit in terms of size.

The case of the UGreen Nexode 45W is made of plastic covered by a blue-gray matte finish and it does have rounded corners. And, on the other side of the retractable plug, you can find the two USB-C ports. Both are capable of delivering 45W on their own, but if you use the two ports at the same time, the power output will be distributed as 25W and 20W for the first and second USB-C port or the other way around.

I am still not entirely sure if it’s a first come, first serve type of situation, but I will put it to the test in a minute to find out. Before doing so, I checked the advertised output for each port and it’s identical for both: 5V/3A, 9V/3A, 12V/3A, 20V, 2.25A. Similarly to the 140W UGreen Nexode and the 100W charger, there is no LED to let you know that the device is connected to a power source.

I suppose that this way, there’s less overhead, although it would hardly consume that much. Moving on, I decided to check the actual power output that the charger is capable of producing, so I connected a 13-inch MacBook Pro which should be able to push each USB-C port to the maximum.

I have already mentioned that the two ports calculate the power output, so they will be set in a combination of 20W and 25W, but I have noticed that the two USB-C ports do share the same controller. And, if you connect or disconnect a device, any other device that’s still connected to the charger will be briefly disconnected and reconnected to match the new power output rules. Similarly to the Nexode 140W, the UGreen Nexode 45W does react to cable connections as if they would be the devices themselves. So make sure to not let any cable connected and unused, otherwise the power output will be limited.

I have connected an iPhone 12 while I was charging the MacBook Pro (using a UGreen Lightning cable that was unusually long, which is great – 6.5 feet or 2 meters – and it’s sold separately) and, as you can see from the photo, the output was limited to 24W. The voltage was steady at 12.07V and the amperage was close to 2A. I noticed that after the power output re-calculation, the UGreen Nexode 45W does know which device needs more power, so it allocates it 25W.

Being so compact must mean that the UGreen Nexode 45W charger will run hot, right? The GaN technology does ensure that there is far less heat wasted, so the chargers should be more efficient and I have seen spectacular results especially in the sub-100W output range. But I have noticed a slight increase in thermal output with the 140W charger from UGreen. In any case, as you can see from the thermal photo that I took with an AGM Glory Pro, the UGreen Nexode 45W charger did well.

It does get a bit more than warm, but even at the full 45W output, charging up devices for about two hours, this is the hottest that the charger will get. So, it’s better than the traditional chargers, but I have seen cooler GaN chargers as well.
The UGreen Nexode 45W does have some protection from high temperature put in place (in case something goes horribly wrong) and there’s also protection against short circuits, over current and over voltage. 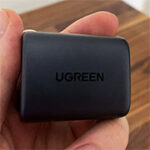