Lastly, let’s talk about the resolution. The native resolution of the Xidu Philbeam S1 is 1920 x 1080p which is good and expected at this price point, but what’s with that 4K advertisement? At first, I assumed that it’s some upscaling done by the Mediatek chip, but, after checking the footage, I am not sure that’s the case, so I read what the manufacturer said again.

They use 4K UltraHD Blue Ray which actually means that the projector will play 4K videos, but not at the full resolution. Then they used 4K detail and 4K anti-blue light, which made me just as confused as you. So yes, it’s a buzz word, but trust me, you won’t get an actual 4K projector that is capable of producing a semi-decent image quality underneath 1K USD, let’ alone underneath 500$.

Lastly, one of the main selling points is that the user can enjoy a giant 300-inch screen and I am not saying that it’s not doable, just that I think some details will be gone, unless you see the screen from very far away. Then again, that’s how you’re supposed to watch large screens, so I’ll put it to the test and find out whether the Xidu Philbeam S1 can indeed reach that far.

Before playing any movie, I need to mention something that’s not as clearly visible with dynamic videos and it’s far more noticeable when seeing the default interface. I did adjust the focus using the wheel and, while I was satisfied with the middle portion of what was displayed, the edges were not as detailed. It seems that the upper and lower edges were fine, but the left and especially the right do experience accuracy loss and the image gets slightly blurry (and off focus).

This seems to be a common occurrence in regards to the LED + LCD projectors, so know that you’re going to see it more or less with every other device that makes use of this technology. At the same time, I could clearly see some fingerprints and smudges on the inner part of the lens. So, I decided to re-open the case and see if I can each that section and clean the lens.

Unfortunately, I was unable to go that far because it seems that it’s necessary to completely tear down the projector and there were a few soldered wires which fall out of my expertise. So yeah, my model shouldn’t really been able to pass the QC, but it did nevertheless. In any case, let’s see some movies. I fired up the Prime Video and played some 1080p movies (from a laptop that only supports this resolution).

I decided to check Lord of the Rings (Fellowship of the Ring) due to its stunning visuals and it’s clear that the contrast is not that strong, which is an expected consequence of the LED + three LCD technology. But with the shades on, I was able to bring some depth to the black levels. It’s still anemic even when compared to an non-accurate display (from the Lenovo Y520), but it’s a bit humbling to see that huge (pseudo) screen in front of you.

I do need to mention that the white is not very bright, with a grayish-blue tone, but the most problematic aspect was the color ghosting, almost specifically for the white sections. There is also some blur on the edges which is something to be expected. Other than that, even if it’s not the perfect-looking footage, I quickly got fully immersed in the movie, so there was nothing that could be considered deal-breaker. Are there better projectors out there? Of course, but at a higher price point.

Even if there are two speakers, the way they’re positioned is not going to give the impression that there are multiple sound sources. It’s still going to be perceived as coming from the projector. Of course, you could position the Xidu Philbeam S1 in such a manner that the speaker sits closer to the wall, therefore diffusing the sound, potentially creating a faux surround impression. A couple of proper speaker and even the small speakers on a TV will do better, but that doesn’t mean that the native speakers are bad.

They’re actually quite decent. They’re fairly clear and can be really loud without experiencing distortions. But, when listening to the soundtrack of the LOTR, it’s not going to be enough and neither will be for immersive gaming sessions. So, just hook a pair of Sony SSCS5 and call it a day.

The game that I usually go to for these type of visual tests is Hellblade Senua’s Sacrifice, a phenomenal video and audio experience – the story is also great. And again, the shortcomings are noticeable the first few seconds (the contrast, the slightly blurry edges), but it still managed to look better than the movies. As for input lag, I didn’t use any fancy tool, just my own eyes. And it didn’t seem to be any delay from when I pressed the button on the keyboard.

You don’t have to believe me, just check this video and see if you notice any difference between the laptop screen and the projected image. Checking the video myself, I do need to mention one major advantage that the projectors have over the TV/monitor screens. There are no reflections. It’s either a wall or a dedicated screen and they’re usually not glossy, so the image remains unaltered by some mischievous light reflection.

Even though it’s clearly a niche product, I was actually surprised to see how popular the home theater projectors are, but is the Xidu Philbeam S1 the device to go for? Well, it depends on your budget. Sure, it can produce a decent image even if it’s not completely dark in the room, it’s possible to have a very large ‘display’ without losing that much in terms of clarity, but it is very much dependent on the source. I also liked gaming using this projector, but yes, there is a cap at 60Hz, which may not be on everyone’s taste.

There are some shortcomings as well, one particular to my unit (smudges on the inner lens), others for the entire series, such as the annoying buttons and the slight blur on the edges. Still, you do get a WiFi connection (support for 5GHz), Miracast and Airplay which may make up for these shortcomings. So, overall, the Xidu Philbeam S1 is a fairly feature-rich projector, but doesn’t fall that far from the entry-level performance. If that’s what you look for in a projector, then do give this device a chance. 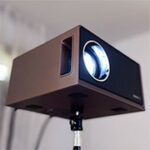