It’s also a bit louder which makes sense considering that in mapping mode it runs in silent mode. As for corners, it’s actually one of the few robot vacuum cleaners that wasn’t afraid of going near the furniture and walls to clean that section properly. The side brush won’t like it, but the rooms definitely got cleaner. What about the object avoidance system? If the objects are taller than 1 inch (off the floor), the Yeedi Vac 2 Pro will see and avoid them. But it’s not a shy avoidance, it will brush onto the objects, which I found a bit funny.

I put a cable on the ground to see if it will eat it up and yes, it did not see it at all. So, just like with Lidar robot vacuum cleaners, make sure to remove the cables, socks and the dreaded pet poop (unless it’s tall enough to trigger the avoidance system).

I was curious if when returning to the base, the avoidance system would be turned off, as it was with the Trifo Lucy. Lo and behold, it was. The robot vacuum cleaner went full speed into my door stopping chicken. Why do manufacturers think that these obstacles disappear when the device returns to the charging station is beyond me. Let’s also talk about the accuracy of the map that the Yeedi Vac 2 Pro creates.

It certainly saw the layout of my rooms in an accurate manner, but it can be a few inches off, which is normal even for Lidar system. That being said, it’s a surprisingly accurate system.
Note: The Yeedi Vac 2 Pro does have trouble navigating in pitch dark, so it needs some light if you want it to vacuum during the night (the camera does not have IR sensors, unlike the Trifo Lucy, which did use this tech).

Is the oscillating mop effective?

The oscillating mop concept sounds great on paper, you get the piece of cloth to vibrate and scrub on the dirt spots, so what could go wrong? Well.. I encountered a couple of issues.

The first is a software bug (again). I installed the mop module and, while it started moving back and forth, no water was flowing out. I took the module out, checked if there were any obstructions (there were none) and put it back up – still nothing. On the third run, we finally got water and it seems to be consistent now, so I am not sure what happened the first two couple of times. The second issue is a bit deeper because the Yeedi Vac 2 Pro cannot tell where there are large spills and if it needs to insist on old spots of dirt.

For this reason, while I do applaud the ability to scrub the floor, if you’re lucky and the robot vacuum cleaner decides to insist in a certain place, it may properly clean it. But as you can see from the video, it didn’t really do anything to the dry juice that was spilled on the floor.

The Yeedi Vac 2 Pro has four suction levels, reaching up to 3,000Pa and to see if it’s possible to let it roam the house during the night, while you sleep. The Silent Mode will produce noise somewhere in the average of 45dB which is fine if the robot vacuum cleaner doesn’t vacuum in the bedrooms, just the rest of the house. The next suction level rises to an average of 49dB which is noisier, but fine during the day, same as the next suction level (level 3) which can get a bit louder, averaging at 53dB.

The highest suction level is the loudest, reaching an average of 59dB, which is still below the traditional vacuum cleaner. What you need to be careful about during the night is the self-emptying recharging station because it gets very loud when it transfers the dirt. It is possible to set the Yeedi Vac 2 Pro to not empty the dust bin during the night, just make sure to enable this function.

As I mentioned in the Mobile Application section, it is possible to set up No-Go zones on the map where the robot vacuum cleaner will not enter.

And it’s a good thing that it can be done from the app because I really dislike the magnetic bands that need to be put inside the rooms when dealing with non-Lidar devices. As for Area cleaning, you can choose a specific room to clean or divide it into smaller spaces, but what’s missing is the ability to manually move the robot vacuum cleaner. Still, I was pleasantly surprised to see that it is possible to set the device to run multiple times in a row.

As with most other robot vacuum cleaners, it is possible for the Yeedi Vac 2 Pro to get stuck on a wire or to get itself in an area where it can’t get out of. But, it’s still one of the most versatile devices of its kind because it’s not ‘afraid’ to get close to an object, which is why during my tests, the robot vacuum cleaner never needed any help.

The moment the Yeedi Vac 2 Pro reaches 10%, it will start looking for the docking station and, as you read in the Navigation section, the object detection feature is turned off. Even so, the device will quickly reach the recharging station, without wondering around randomly.

The Yeedi Vac 2 Pro uses the rolling brush along with the side brush to clean the rooms and it’s an effective system since the robot vacuum cleaner had no trouble sucking in both larger and smaller particles off the floor. The one issue that a lot of these devices has is the corner cleaning. Yes, some have that edge cleaning function where the robot vacuum cleaner kind of gets closer to the objects, but not that much.

I suppose it may be a limitation of the Lidar technology – it needs more space to close the margin of error. The VSLAM technology seems to be more forgiving in this regard, so the Yeedi Vac 2 Pro does get close and personal to the objects in the room and I do think that it cleans a bit better for this reason alone. Since it uses a camera, I would have liked some dirt detection system in place, but I guess it’s too soon to see this type of implementation.

The robot vacuum cleaners are not that great with carpets, but the manufacturers do try their best to improve the performance using various technologies, as well as a few tricks. For example, the Yeedi Vac 2 Pro does raise the suction level when it detects that it’s on a carpet, but, if you have the mop module attached, it will try to avoid going over carpets. If there is hair (including pet hair), it is going to get tangled on the brushes and you do need to run the vacuum cleaner several times until the carpet will be considered clean.

So, I do suggest that you don’t go for the entry-level or even the mid-range robot vacuum cleaners if you have a fully-carpeted house, but it should be fine for hard-floors and a carpet here and there.

If you get the self-emptying station, you won’t have to do much until the dust bag is filled – even so, it’s good practice to take out the dust bin and at least clean the HEPA filter from time to time. Also, pay attention to the brushes so they don’t get too much hair tangled – both brushes can be fully detached and properly cleaned. Obviously, keep any electronic part out of water.

The Yeedi Vac 2 Pro uses a 5,200mAh battery which the manufacturer says should last for 220 minutes (a bit over three hours). And yes, it’s a very unrealistic claim. Sure, if you vacuum at the lowest suction level and the mapping of the rooms is already properly done (with no new obstacles), the robot vacuum cleaner will finish the session quickly, but it’s not going to pass 2 hours. During my tests, it lasted a bit over an hour an a half while the suction level was set to 1.

If you read the entire article (I applaud you if you managed to read it all), then you know that Yeedi used parts from other brands, so you should be able to get the mop module from the manufacturer or from third-parties as well – the docking station is also from another brand. The HEPA filter is universal and so is the side brush, and even the bottom-placed rolling brush. So, overall, you should not have any issues procuring spare parts for the Yeedi Vac 2 Pro.

I admit I was a bit skeptic about whether the VSLAM technology will allow the Yeedi Vac 2 Pro to properly navigate the rooms and clean them. And that’s because it didn’t perform that great on the Trifo Lucy, but Yeedi seems to have used this tech to its advantage since the rooms are properly differentiated and the navigation was fairly sound. Instead, the oscillating mop is the feature that did disappoint. Sure, it will somehow work better than the regular piece of cloth of other robot vacuum cleaners, but only by a small margin.

Furthermore, I do need to mention that there are some growing pains with the software. I know that the engineers have improved it a lot from a few months ago, but there are still some issues with the app and with the navigation algorithm. Even in its current state, it’s one of the most accurate robot vacuum cleaners in terms of actual cleaning, so there is some great potential here, but it does need some more polishing. 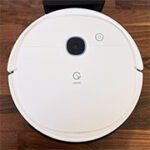