The Zyxel MG-108 is the better equipped model from the new 2.5GbE unmanaged desktop switch series that has been seemingly designed for small and medium businesses, but the compact design and the 2.5Gbps limitation per port may also make it suitable for home use. 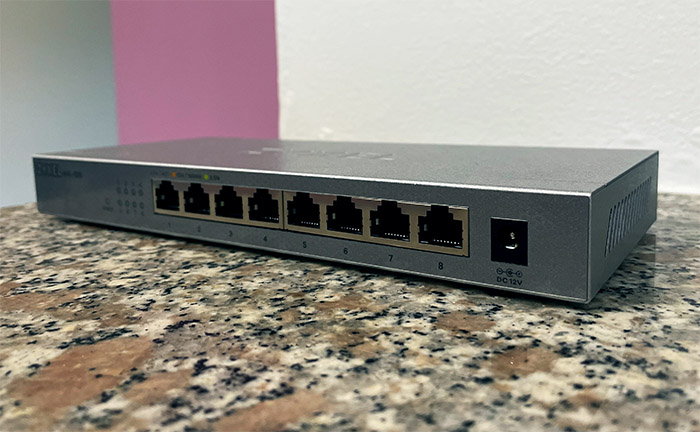 I won’t deny that going past the Gigabit limitation is still quite expensive, but Zyxel (as well as other manufacturers, such as QNAP and Netgear) has managed to develop fairly balanced Ethernet switches at an acceptable price tag. The five port switch from the same series goes for a little above $100 at the moment of writing, while the 5Gbps QNAP adapter that I got a few months back goes for almost the same amount – and this was one of the more affordable models. That being said, let’s check out the Zyxel MG-108 and see if it’s the right time to move to a multi-Gigabit network or if we still need to wait a bit more.

The last multi-Gigabit Ethernet switch that I tested was the XS1930-12HP and I was surprised by how Zyxel still managed to keep it relatively compact considering the amount of power (and the performance) that it had to deliver. So I had high hopes that the manufacturer could also manage to keep the Zyxel MG-108 as compact as possible. And indeed, the Ethernet switch measures 9.45 x 4.13 x 1.02 inches, which seems to be the standard size of the smaller Ethernet switches (since the TRENDnet TPE-LG80 has the exact same dimensions). 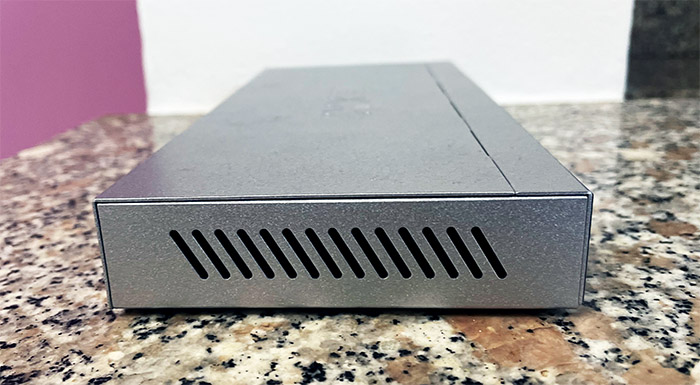 At the same time, the Ethernet switches are usually designed to be mounted in a rack and, as expected, the compact Zyxel MG-108 does have lateral mounting holes, so, if you want to add it to a rack, you will need to use a tray. Not the ideal solution, but then again, you do get the option to leave the switch on the desk. And to make it easier, you need to attach the four silicone feet to the bottom of the Ethernet switch – there are dedicated areas. This way, it’s not going to move around on your desk after you add multiple cables. The weight of the device will play an important role in this part and, at its 1.41 lb, the switch is going to stay put.

Then again, there are a couple of mounting holes on the bottom of the device, so you can simply mount it on the wall. I also need to mention that the Zyxel MG-108 is entirely made of metal, even the front section which is covered by a smooth finish. The entire device is covered by a gray matte finish, so it’s not the most exciting-looking switch out there, but it doesn’t need to attract the users with its looks, it does so with the eight 2.5GbE ports. While the XGS1010-12 only had a couple of 2.5GbE ports along with two 10Gbps SFP+ ports, Zyxel did decide that all of the RJ45 LAN ports on the MG-108 should support connections at 2.5GbE and, of course, it also supports 1Gbps and 100Mbps connections as well. All these ports can be found on the front of the Ethernet switch and they sit in between the block of LEDs and the Power connector. 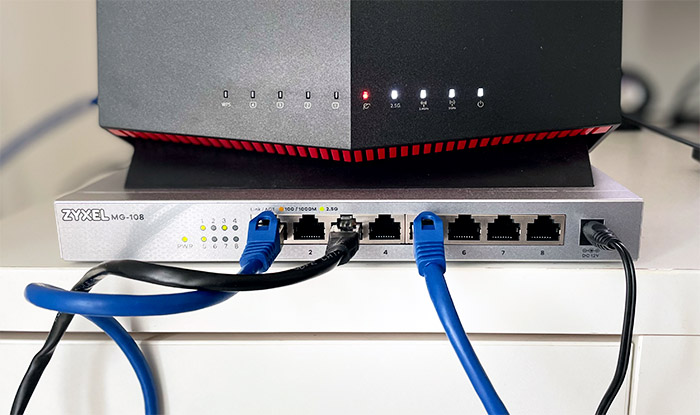 After you power on the switch, the Power LED will turn yellow and each of the eight LAN ports has a dedicated LED which will light up in a certain color, depending on the type of connection. If it’s done at 100Mbps/1Gbps, then the LED will be orange, otherwise, at 2.5GbE, the LED will turn yellow – the LEDs will also flash when data is being transmitted or received.
You may have noticed that there is no PoE support and that’s a bit of a shame considering the growing need to keep both PoE access points and IP cameras alive. But then again, adding PoE would have shot the price tag way up and it would have also forced Zyxel to add a fan. Unsurprisingly, the small case of the MG-108 is fanless and relies on passive cooling to remain at a proper temperature.

I noticed that Zyxel has added a few ventilation holes on the rear side, as well as on the right and left side of the MG-108 in the hopes that it would be enough to keep the switch from overheating. The Zyxel MG-108 hasn’t overheated (so far), but it does function at a higher temperature than what I was accustomed with, especially if I added multiple 2.5GbE clients.

The tear-down process is one of the easiest I have experienced with any networking device and yes, there are no warranty seals (as seen on all Asus routers), but this does not mean that opening up the switch can’t void your warranty – don’t just go ahead and break stuff inside. In any case, I removed the three screws from the rear side, slid the top cover backwards and I was greeted by the PCB. Since I saw three fairly large heatsinks seemingly being soldered to the board, I decided to remove the four screws and check whether it’s possible to remove the heatsinks from the other side. Unfortunately there isn’t, so there’s no way for me to check the main components. 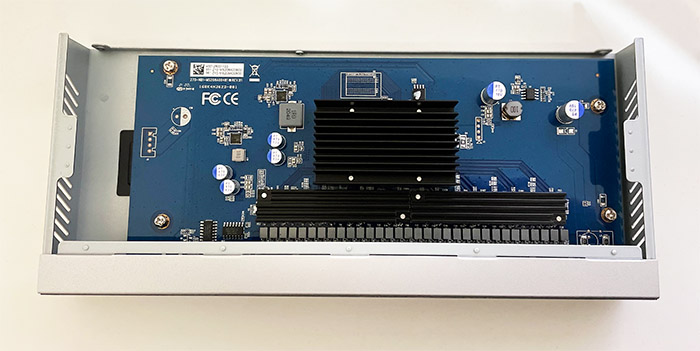 Despite being a multi-Gigabit Ethernet switch, the Zyxel MG-108 is a plug and play (unmanaged) device, so there is no software installation needed and no type of buttons or switched to set the priority for the connected devices. There is 802.1p QoS present though, which means that some of your client devices will still have their priority honored. And that’s pretty much it, what you need to do is take the device out of its box, plug the cable into a power socket and wait for the Power LED to turn on and then start adding devices. What you need to know is that the type of cable and its length will be very important so make sure that you don’t go below the commonly used CAT5E.

Yes, you don’t necessarily need to go up to CAT 6 and beyond, but, while both the 5E and the 6 can comfortably reach 2.5Gbps speeds, you’re missing out on some advantages that only the newer standard can offer (less interference, better shielding and so on – and these can make a difference). 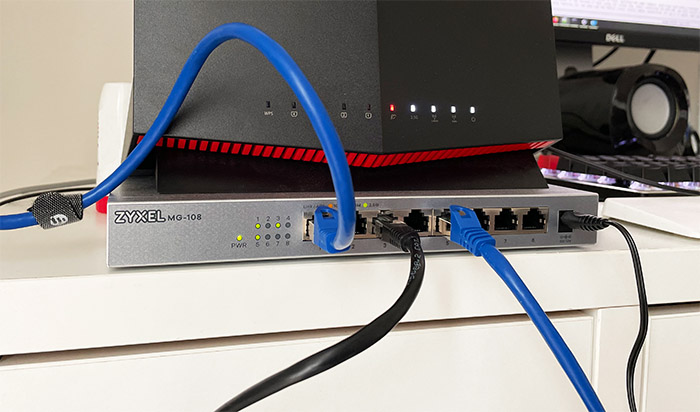 The unmanaged Ethernet switches are created to have a very similar performance between them and that has been proven over time with the Gigabit switches. The multi-Gigabit Ethernet switches, such as the Zyxel MG-108 will obviously outshine any Gigabit switch and the upstream and downstream throughput should go close to the maximum supported by each port. That is, unless you have a bad cable or a client device with an unstable Ethernet adapter (it happens more often than you may think). 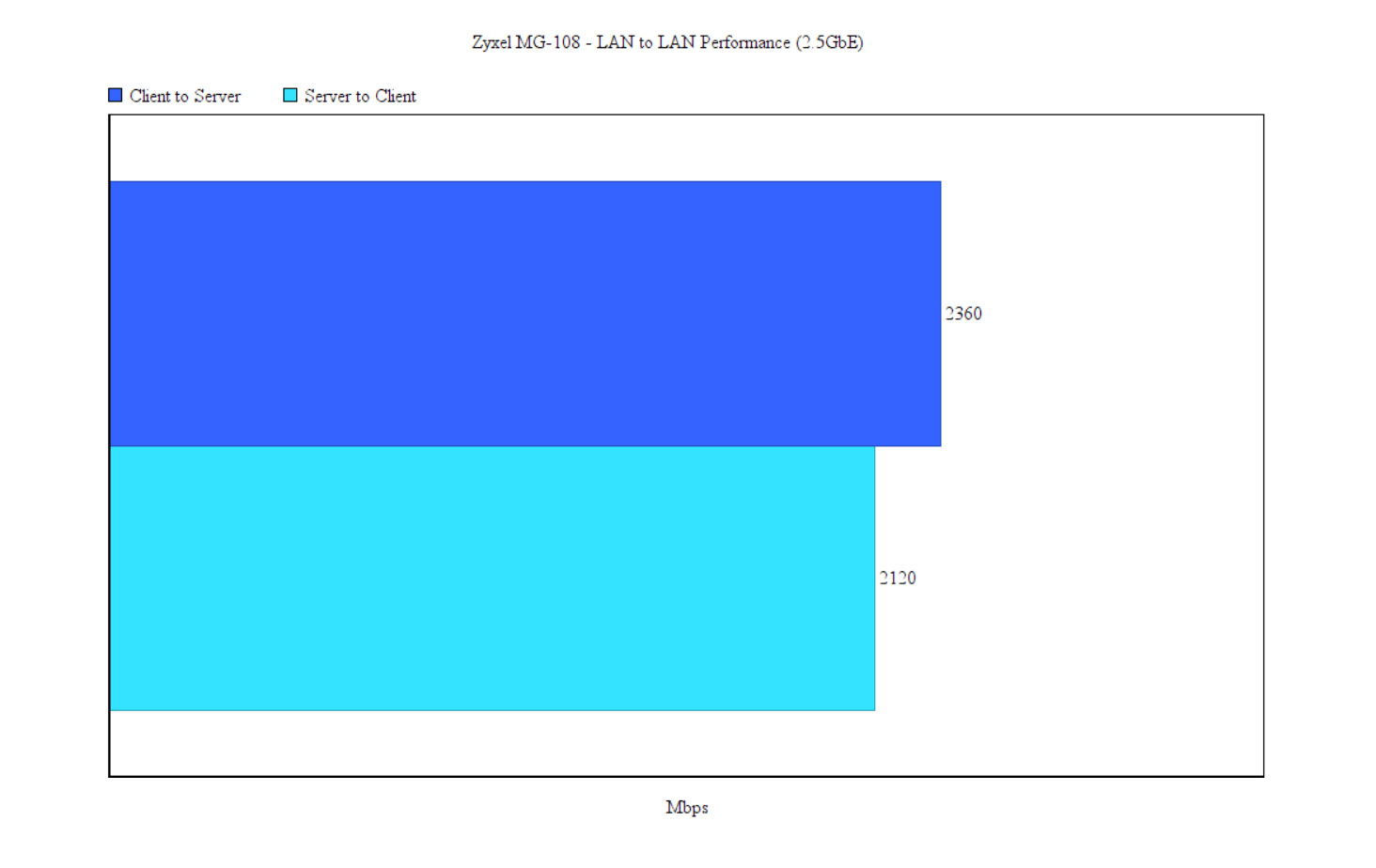 I did not have some specialized equipment to properly test the performance of the MG-108, but I did push some data up and downstream from a client device to a server and the results were really good, after taking into account the overhead. That being said, I saw an average of 2.36Gbps upstream and 2.12Gbps downstream. The cables that I used were two CAT6 cables and one of the computers was equipped with a Realtek 8125B 2.5G LAN controller, while the other was a MacBook, so I relied on one of the Thunderbolt 3 ports to get a multi-Gigabit connection.

The Zyxel MG-108 is a no-frills multi-Gigabit Ethernet switch that helps connect more than one wired client devices to your network. And I am sure that a lot of small and medium businesses will make use of its capabilities, even if there is no PoE or a management utility, especially due to its price. But what about home users? I think that this new series is great for people that have a multi-Gigabit router since this way you can properly expand the 2.5GbE network (and I am thinking specifically at routers such as the RT-AX86U since it has a single multiGig port). So yes, if you have the necessary hardware (NAS, router, access points, PC) that supports at least 2.5Gbps, then it’s hard to find something better than the Zyxel MG-108. 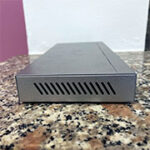