I can imagine that WAX640S-6E will perform in a similar manner, while also leaving the 5GHz enabled. At 15 feet, we were still above 1.36Gbps, but, as soon as the line of sight got interrupted, the throughput got cut to 786Mbps up and 335Mbps downstream at 30 feet (-72dB).

After putting some walls in between the access point and the client device, the attenuation was -79dB (45 feet) and I measured an average of 187Mbps up and 26.7Mbps downstream. Going a bit farther disconnected the client device, so that’s as far as I could test the WiFi performance.

The performance on the 2.4GHz is not really that impressive. It’s not bad per se, just that it’s clearly tailored only for older devices and IoT products, which I suppose makes sense. That being said, I first connected the WiFi 6 client device to the WiFi network, and, at 5 feet, it could reach up to 191Mbps upstream and 112Mbps downstream.

The Pixel 2 XL starts about the same as the Intel 8265 client device since I saw an average of 108Mbps up and 99.1Mbps downstream at 5 feet, but it could only reach as far as 45 feet (-67dB attenuation) where the upstream throughput was 43.3Mbps and downstream, it was 40.1Mbps. Anything farther than that disconnected the client device.

To access the standalone mode, you need to insert the IP address received from the router into the URL of any browser and, when prompted, to use admin/1234 as the username and password. Even if the Zyxel NWA220AX-6E is marketed mainly as a Cloud access point, the Standalone mode is surprisingly comprehensive (for example, the ECW line from EnGenius offers some bare-bones features in the standalone mode). The main page is the Dashboard where there are various types of information (including live CPU, RAM and flash memory usage).

Then, under Monitor, there is more granular status info, divided into Network Status (shows the use of the two Ethernet ports), Wireless (the SSIDs, Station and WDS Link info, as well as detected Rogue APs) and Log. Under Configuration, there is a healthy number of options so, under Network, besides adjusting the IP Settings, you can also configure the VLAN and enable Storm Control (at the AP level – both Broadcast and Multicast are supported).

Then, under Wireless, it’s possible to change the two Radios’ settings (it’s interesting to see that it’s possible to set up the Zyxel NWA220AX-6E as a wireless Repeater), set up the Rogue AP Detection, Load Balancing and DCS. Furthermore, you can adjust the User, AP and WDS Profiles under Object while under System, it’s possible to set up the HTTPS and HTTP Server Port, SSH, FTP and SNMP. The last major section is the Maintenance where you can adjust the configuration files (includes Shell Script), run the Diagnostic Tool (Remote Capture), adjust the way the LED works (enable Suppression or Locator mode), Reboot and Shutdown the AP.

When I tested the Zyxel NWA220AX-6E, there was a promo that allowed me to check out some of the advanced options under Nebula Pro pack, but before that let’s see what we get with the Base Pack. Before anything else, we need to adopt the Zyxel NWA220AX-6E to the network and that can be done from Organization-wide > License and Inventory > Devices. And after the AP has been added, it needs to be attached to a Site and then just wait for the provisioning to finish.

For simplicity’s sake, I created a new SSID for the 6GHz radio and assigned it a WPA3 security key for the wireless test. And, when switching, I just disabled the 5GHz one and then enabling the 6GHz. Afterwards, it’s also necessary to visit the Radio settings to check what channel width is assigned for each radio, as well as the output power. It’s worth mentioning the DCS which is a cool feature that dynamically chooses the suitable channel for your network (by scanning the AP’s surroundings).

There is also Smart Steering for all three radio bands where you can set the Disassociate Station Threshold and the Optimization aggressiveness – this way, you’re not going to hang on a far-away AP but move to the closest one. Moving to the bottom, we can see all the adopted access points and to quickly check the WiFi 6E AP, just click on the BandFlex icon. Clicking on the Zyxel NWA220AX-6E, it will summon a dedicated window where you can change the individual settings of the AP, overwriting the global settings.

It’s possible to switch between the radio bands, set the channel width and there was also Smart Steering, but only available under the Pro Pack, so I enabled the trial version. This way, some options were open to me, such as the Programmable SSID that allows you to go past the 6 SSIDs limit and there is also the Wireless Health section which includes the Auto optimization action. This is a feature that I have seen on the Ubiquiti access points (U6-Pro), the EnGenius APs (ECW336) and even on the TP-Link APs (EAP670) as an AI optimization technique.

The Zyxel NWA220AX-6E performed very well as a WiFi 6 access point and even better as a WiFi 6E access point, but you can’t have them both at the same time. And yes, I know, the future-proofing aspect should be appealing, but it’s still questionable considering the rate at which the WiFi standards get released. I am fairly sure that a lot of people will just consider the Zyxel NWA220AX-6E a WiFi 6 access point which is fair since the wireless performance of the AP is really good even when using only the 5GHz radio. The 6E aspect will be just like the 3D on the TVs. It’s there and you can enable it, but you’re most likely just ignore it since you don’t really have a choice. There is no wide adoption on WiFi 6E client devices, and we are still many years before the businesses will consider switching to the newer standard (that is unless they decide to skip directly to the WiFi 7 or above). 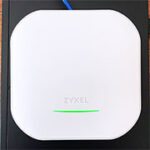