The EnGenius ECW336 is the first WiFi 6E developed by the manufacturer and it can also be considered the current flagship wireless access point considering that the engineers didn’t really hold back when they designed the device. In terms of hardware, there is now a 5GbE port as opposed to the 2.5GbE of the ECW230 and I suppose it’s more suitable as to not bottleneck the 6GHz radio frequency capacity.

Surely, the 2.4GHz and the 5GHz remain intact as to provide the obligatory backwards compatibility, but the 6GHz frequency band is very special. Unlike the WiFi 6 which was more about dense networks, the new radio allows any type of user (from enterprise and SMBs to home users) that relies on the WiFi 6E standard to see an actual increase in the network performance.

That’s because there are an additional 7 channels on the 160MHz channel bandwidth and to better understand what that means is by checking how many channels were under 5GHz. There were only two, so there was little chance to get a good throughput using 160MHz due to overwhelming interference. This does change when using the 6GHz radio since you get a clean and fast connection with your WiFi 6E client devices (the legacy devices will no longer ‘pollute’ the WiFi).

It’s also worth mentioning that the ECW336 is 4×4 and it supports OFDMA, as well as BSS Coloring so let’s put it to the test and see what you can expect when investing in a WiFi 6E access point. Also, if it’s worth making the transition.

I put the EnGenius ECW336 next to the ECW230, as well as the more security focused ECW230S, and, if you’re looking from the top, I doubt you’ll immediately be able to tell them apart. All of them have a slim, elegant case, despite carrying some powerful hardware and if you look a bit closer, you’ll see that the LED bar of the ECW336 has a new indicator for the 6GHz. All three also have a metallic gray bottom and, while the ribbed metallic section of the ECW230S sets it apart from the group, the ECW230 and the ECW336 look pretty much the same.

I assume that a ECW336S is on the way with that additional antenna which will look more like the ECW230S. In any case, the EnGenius ECW336 is a ceiling-mount access point, so there is a space for the bracket in the middle of the two mounting holes. Those are for mounting the AP on a wall. And yes, there is no actual way to put the EnGenius ECW336 on a desk – this is enforced by the single Ethernet port which negates the possibility of having extra cables for wired client devices.

The LED strip from the top is longer, but it functions mostly in the same manner as on the other ECW access points. There’s the Power LED which sits far on the left, then there’s the LAN LED followed by three LEDs for the three available frequency bands. The Power LED should be solid orange if the AP is connected to the Cloud controller, otherwise, it will blink orange until you’re done using the standalone GUI (which doesn’t offer that much).

Moving back to the bottom of the case, there is a dedicated area (carved into the plastic and metal) where you’ll be able to see the recessed Reset button (needs to be pressed for 10 seconds to return the EnGenius ECW336 to its factory settings) and there’s also a Power port and an Ethernet port. It’s a whooping 5GbE Ethernet port which supports PoE+ (802.11at).

There is, of course, no PoE adapter in the package, nor is there any type of cable, so you will have to use your own.

As for the heat management, similarly to the Ubiquiti APs, there are no cut-outs to let the heat out, but the ECW336 does rely on the metallic part to gather and dissipate all the heat coming from the internal components. That’s why, just like the ECW230 and the ECW230S, the case of the ECW336 is going to get a bit hotter than on other access points. Will it cause any thermal throttling? For now, it does not.

The EnGenius ECW336 can be opened by removing the four screws from the bottom of the case and then prying open the plastic part of the case. Be aware that doing so can void the warranty (if you go ahead and start breaking stuff), even if there are no seal stickers anywhere. The layout of the PCB and antennas is very clean, and the engineers left no space unused – I saw that two antennas are glued to the PCB itself which is an interesting choice and perhaps it’s for the 6GHz?

I have opened the ECW230 and the ECW230S before, and, at the first glance, the layout of the ECW336 seemed different in terms of both antenna and component positioning. But those heatsinks at the top part of the PCB don’t cover any of the components that interest us, they’re on the other side of the board. So, I had to disconnect the antennas and flip the PCB. This way, I could finally see the quad-core 2.2GHz Qualcomm IPQ8072A (4x ARM Cortex A53) – yes, the EnGenius ECW336 uses the Qualcomm® Networking Pro 1210 platform.

The most obvious spectacular addition is the third frequency band, 6GHz, which should actually show a proper difference in performance when compared to the WiFi 5 standard. The WiFi 6 is great for crowded WiFi networks in busy areas, and it can improve the throughput over the WiFi 5 routers when the client devices are compatible and allow the use of OFDMA. But the WiFi 6E is different because its channels’ bandwidth is wider and there is pretty much no interference at the moment.

Not from other APs because walls and other physical objects will limit the performance. That means that thanks to the extra channels under 160MHz, you can actually use this channel bandwidth and see improvements without sacrificing stability.

You do still get access to all the features of the 802.11ax, such as the aforementioned OFDMA (smaller resource units to serve multiple client devices at the same time while limiting latency), MU-MIMO (4×4 configuration) and yes, there is also support for EnGenius’ version of mesh technology. You can mesh multiple EnGenius ECW336 access points on the 6GHz (if you don’t have client devices to use this frequency yet) and then push the transmit power higher so that it can reach a far-away WiFi 6E AP. It’s not like you’re actually going to bother any neighbor.

Yes, I first tested the EnGenius ECW336 on the 5GHz frequency band to get a better comparison point for when I check its performance on the 6GHz. And the client device that I first used is a PC equipped with an Intel AX200 adapter. Since the Ethernet port is 5GbE, I wanted to make sure that there is little to no bottleneck due to my equipment, so I used the only router that I have with a multi-Gigabit port, the Asus RT-AX86U which was paired to a multi-Gigabit switch (I used the Zyxel XS1930, but the EnGenius ECS2512FP would have worked as well).

The server does support 2.5GbE, so, while it limits the 5Gbps potential of the switch, it shouldn’t be that much of an impact on the wireless performance. So, while the WiFi 6 client device was connected to the 5GHz network (80MHz which is the maximum supported channel bandwidth), I saw an average of 689Mbps upstream and 470Mbps downstream, which are good results (at -36dB attenuation). Going farther to 30 feet and no line of sight, the throughput that I measured was 434Mbps up and 330Mbps downstream.

What’s interesting is that I usually see both access points and wireless routers starting to lose in terms of range at about 70 feet, but the EnGenius ECW336 still managed to maintain a usable connection to the client device, even at -85dB attenuation. Upstream, I saw an average of 60.6Mbps, while downstream, it was 43.7Mbps.

Next, I switched to a WiFi 5 client device (laptop equipped with an Intel 8265 adapter) and, at 5 feet, the throughput is a bit less impressive (598Mbps up and 357Mbps down), but it does pick up after distancing the laptop from the access point. Well, up to 45 feet (-69dB) because that’s the spot where you will still get a decent connection (90Mbps upstream and 20.7Mbps). I say that because I wouldn’t go past 70 feet (-85dB), since even at this point, you’re barely getting a stable connection to the ECW336.

Lastly, I checked the second WiFi 5 client device (a Pixel 2 XL) which displayed a similar behavior. Near the AP, it only managed to go up to 399Mbps upstream (292Mbps down) and you’ll get a usable throughput up to 45 feet.
At 70 feet, I managed to see that the attenuation was -88dB, but I couldn’t get anything above 1Mbps neither upstream, nor downstream.

For this test, I needed a WiFi 6E client device and, even if the adapters can be found everywhere and at surprisingly low price, be aware that you need to have Windows 11 or Linux to be able to actually see the 6GHz network. So, I installed the TP-Link AXE5400 on an older Desktop PC, used Ubuntu Mint (lovely distro) and we were good to go. I used the 160MHz channel bandwidth which makes far more sense here than with the 5GHz frequency band, unless you live in the middle of nowhere (and using one AP).

That being said, I saw an average of 1,24Gbps upstream which is impressive considering that it’s a fairly sustained performance (some occasional drops to 900+Mbps); downstream, the throughput was 704Mbps (-34dB attenuation). Is it possible to get an even better performance, perhaps, but then again, I leave all these values here so you can reproduce these tests yourself in your own home or office. 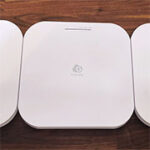