The TP-Link EAP670 is kind of like the bigger brother of the EAP660 HD because it has a nearly identical case, and it doesn’t differ that much in terms of features either. Yes, I know there’s the whole AX3600 vs AX5400 class, so TP-Link beefed up the 5GHz radio band a little bit on the EAP670 and there’s also the added support for the 160MHz channel bandwidth.

But does it actually matter that much? It depends. In an area with lots of interference, you’re better off using the 40MHz channel width, but in a fairly isolated place that’s not actively invaded by other access point, using the 160MHz will make a difference. So, a warehouse or a well-insulated office should be the best place to install multiple TP-Link EAP670 access points.

The device also supports OFDMA, which is the most important feature that came with the WiFi 6 standard plus there’s the support for MU-MIMO and Beamforming. Furthermore, the TP-Link EAP670 can be added as a node inside a larger mesh network where the client device can roam between units without having to connect to a new SSID. And yes, TP-Link does promise a seamless roaming experience. The EAP660 HD got me excited when I saw the 2.5GbE support, but the 80MHz channel bandwidth brought me back to reality, so is the EAP670 able to perform better? Let’s put it to the test and find out.

TP-Link really likes to design big cases for some of their access points and it goes way back to the EAP245 which was far from compact. The EAP610 is a bit smaller, but yes, both the TP-Link EAP670 and the EAP660 HD have large plastic cases which will stick out of your ceiling quite a bit. Still, the manufacturer has added a white matte finish to attempt some sort of blending in and, considering that there is no large LED ring at the top, you’re going to see the AP the first time you enter the room, but then it should just fade into the background, which is good.

There are some ventilation holes on the narrower side section and, when paired with the size of the case, it must mean that the thermal management is done properly, right? It sure is because the case only gets warm, but it does not heat up at all.

Also, unlike the Ubiquiti U6-Pro and the U6-LR which are somewhat built to withstand the elements, you cannot mount the EAP670 outdoors since it’s an indoors-only unit. The aforementioned LED will stay solid if everything is in working conditions and, if there’s an error, it will turn off; also, it’s going to flash when upgrading the firmware. Is it as useful as a proper array of LEDs? No, but this single LED trend seems to be here to stay (and I am not happy about it).

As for mounting options, you do get a simple bracket that you can attach to the wall or ceiling and then rotate the access point into place. But can you leave the TP-Link EAP670 on the desk? You can, but it’s going to move around a lot since there are no feet and it’s also huge, so it will occupy a lot from your desk. Probably the only notable design difference between the EAP670 and the EAP660 HD is the ports position.

It’s nothing radical since they’re placed in the same spot on the rear side, it’s just that the ports are closer together, so the PCB should be a lot more different that I thought. In any case, there is a recessed Reset button for returning the AP to its factory settings and it sits next to the Power port (you do get a power adapter inside the package) and the 2.5GbE Ethernet port which also support PoE+ (802.3at).

Considering that the TP-Link EAP670 shares the same upper section of the case as the EAP660 HD, the teardown process is pretty much the same. You need to remove the four screws from the bottom of the device and then remove the screw underneath the label. Although TP-Link doesn’t have an obvious warranty seal, removing the label from the bottom will most likely void the warranty. After taking out all the screws, use a prying tool to carefully detach the top part and exposing the PCB with the antenna board.

The antenna pattern is somewhat similar to that on the EAP660 HD, but I did see that there are two less antennas for the 2.4GHz radio band. Afterwards, I took out the screws that kept the antenna board and, after putting it aside, I could see the large heatsink covering the main PCB. The heatsink can be removed after turning the board upside down but be very careful about the LED because it’s held by two long aluminum wires (not the best approach imho).

I am not so sure about the efficiency of putting a heatsink in between the main PCB and the antenna board, but then again, I assume that the engineers knew better than me what they were doing. That being said, I was able to identify the dual-core 1GHz Qualcomm IPQ0518 SoC (ARM A53), the 128MB of SPI-NAND flash memory from ESMT (FS001G41LB), the Qualcomm QCA8081 Ethernet PHY driver and the 256MB of RAM from ESMT (M15T4G16256A).

The main WiFi 6 feature that the TP-Link EAP670 supports is the OFDMA (Orthogonal Frequency-Division Multiple Access) which increases the efficiency of the network by limiting the latency. This is achieved by using RUs (resource units) to carry various sizes of data through a channel towards multiple client devices at the same time. I would have liked to also see the BSS Coloring feature which is phenomenal at cutting the impact of the co-channel interference, but it’s not supported on the EAP670.

We do get MU-MIMO and Beamforming which are expected features at this point, although we still have a shortness of compatible client devices on the market, even after all these years. And the TP-Link EAP670 can go up to 160MHz channel width which, as I said in the intro, is a good feature to have, but its applications are very limited.

That’s because of the interference and the fact that it only has two non-overlapping channel available, so anything long-range will suffer from an unstable connection. I do need to mention the WiFi 6E which does make use of the 160MHz channel bandwidth in a far more efficient way, but we’re very far from any wide-spread adoption of WiFi 6E-compatible clients. I am fairly sure that I am the only person on a radius of 500 miles that has a WiFi 6E access point (the EnGenius ECW336).

Lastly, the TP-Link EAP670 does support the mesh technology (a proprietary implementation), but it’s not OneMesh so you can’t use the AP as a mesh node within a larger network that includes TP-Link routers as well. No, you need to use the Omada SDN and pair the access point with other compatible devices from that software.

In order to test the TP-Link EAP670, I used the same extra devices as when I checked the wireless performance of the EAP660 HD. This means that the EAP670 is connected to the Zyxel XS1930 multi-Gigabit switch which, in turn, is connected to the Asus RT-AX86U. The server computer has a 2.5GbE Ethernet port, so we shouldn’t experience any bottleneck from any device in the network. This way, I connected a WiFi 6 client device (equipped with an AX200 adapter) and I checked the throughput using the 160MHz channel bandwidth at 5 feet.

It’s worth noting that the EAP660 HD performed incredibly well on the 80MHz, and it felt that it could have gone over 1Gbps with the right tweaks. The good news is that the EAP670 did indeed go past the Gigabit limit, reaching 1,150Mbps upstream and 532Mbps downstream (-29db attenuation).

Even moving farther, to about 45 feet still offered a decent throughput, 340Mbps up and 257Mbps downstream. At 70 feet is where the Ubiquiti U6-Pro had some major trouble, but the EAP660 HD handled the increased attenuation just fine.

At first glance, it does seem bizarrely similar to the EAP660 HD, but the downstream performance is not really on par which seems to be true at other distances as well. For example, at 45 feet, the average throughput was 419Mbps up and only 49.8Mbps downstream. Going a little bit farther, at 70 feet made the throughput drop to only 3.8Mbps up and 0.2Mbps downstream. I know that it may seem curious how I was able to reach farther on the 160MHz channel bandwidth, but it’s just the lack of any major interference. 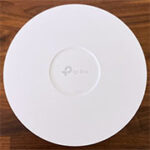