Before going to the wireless testing, it’s worth mentioning the MU-MIMO technology which still helps serve more than one client at the same time (instead of the round-robin technique), as well as the BeamForming tech for pointing the signal directly at the compatible clients. As expected, the Asus RT-AX56U can be a part of an AiMesh network, so, if you have a very large house and an unused Asus router, you could try and create a mesh system. I have tested a couple of routers last year as nodes in an AiMesh network (the Asus RT-AC68U and the Asus RT-AC86U) and the performance wasn’t that impressive and the installation process was a drag, but perhaps the newer models will improve this process, pushing the AiMesh system next to the best in the league: Netgear Orbi, Eero, Google WiFi and so on.


These are the main features, so let’s see how does the RT-AX56U perform in a few wireless tests. First, I took two computers, one will act as the server and will be connected to the router through a cable and the other will be the client and it will be equipped with a TP-Link TX3000E AX3000 PCI WiFi adapter. 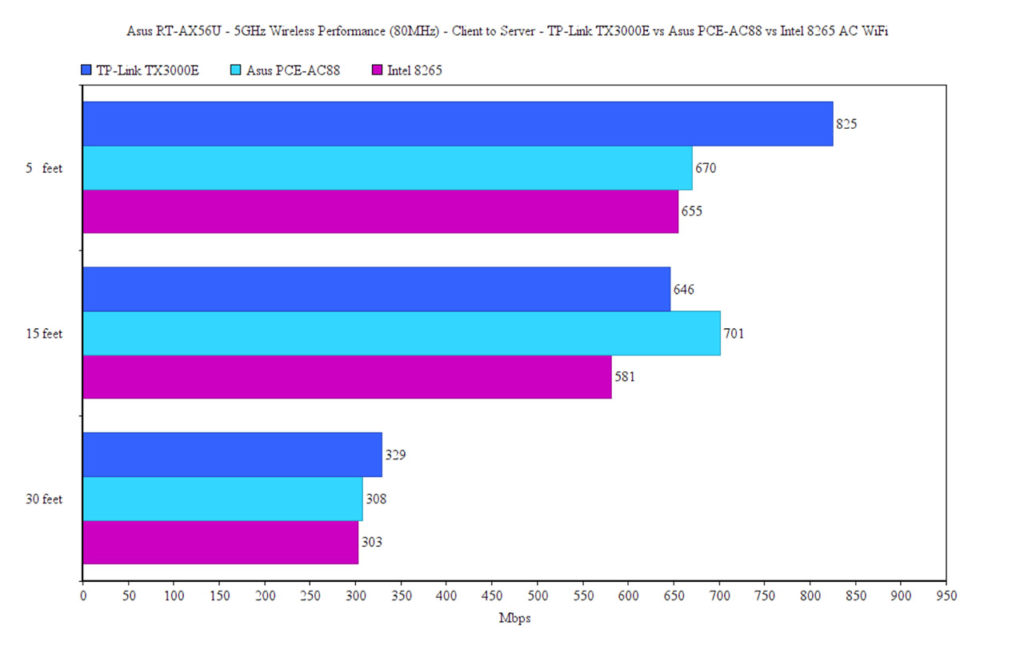 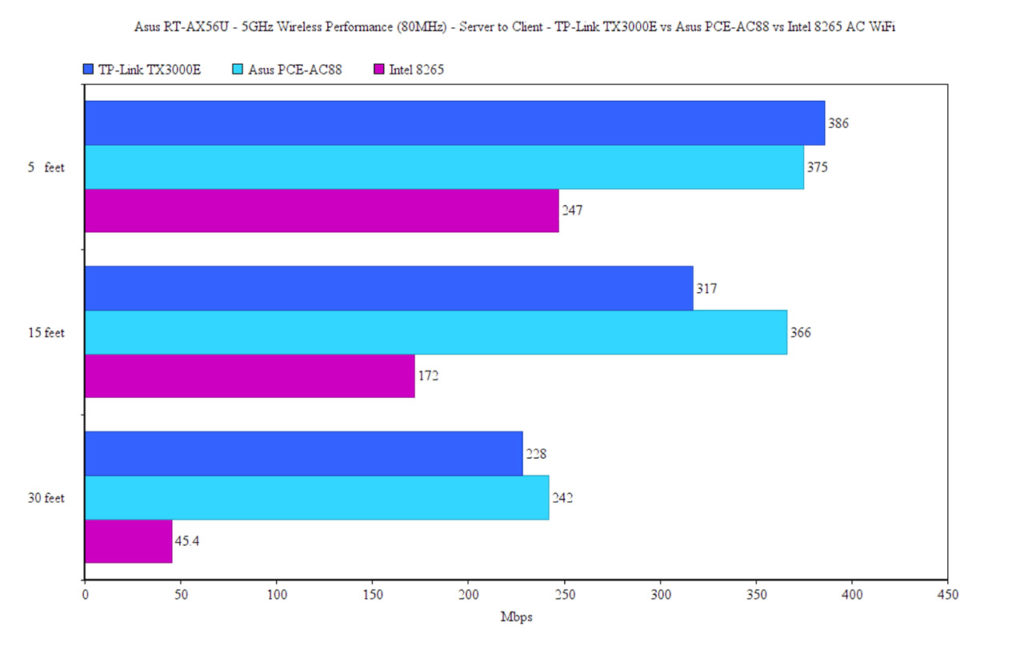 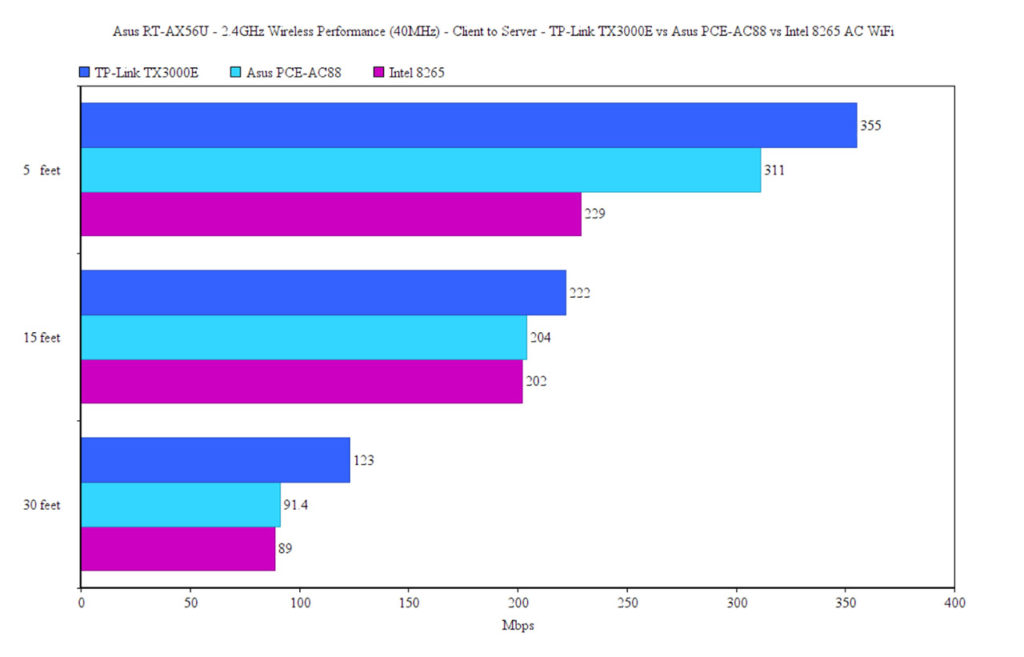 Lastly, I decided to change the client for a laptop equipped with an Intel 8265 AC WiFi card which ran very well with the other AX routers that I have tested so far. So, while connected to the 5GHz network, from the client to the server, at 5 feet, I measured an average of 655 Mbps (a unexpectedly good performance), while at 30 feet, I saw an average of 303 Mbps. From the server to the client, at 5 feet, I measured around 247 Mbps and, at 30 feet, the throughput took a nosedive to an average of 45.4Mbps. 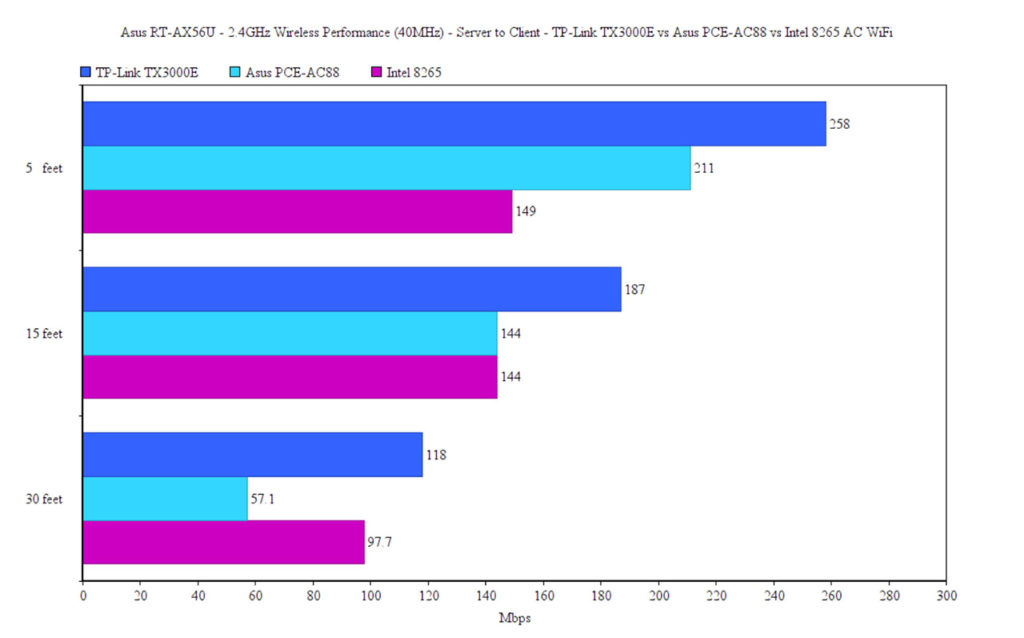 
Installation and Software
The installation process of the RT-AX56U is the same as with pretty much all other Asus routers (from the past four years), so, after plugging in the Ethernet cable from the modem, connected the power cable and switching the Power switch to on, you have two ways that you can run the initial configuration process: through the app or the browser based interface – I chose the former since it’s usually easier and faster.
After downloading and running the Asus Router app, I chose to Setup a new router and, after I selected the Asus Wireless router group, the mobile phone quickly detected the Asus_58 router and I could immediately see the Quick Internet Setup window. 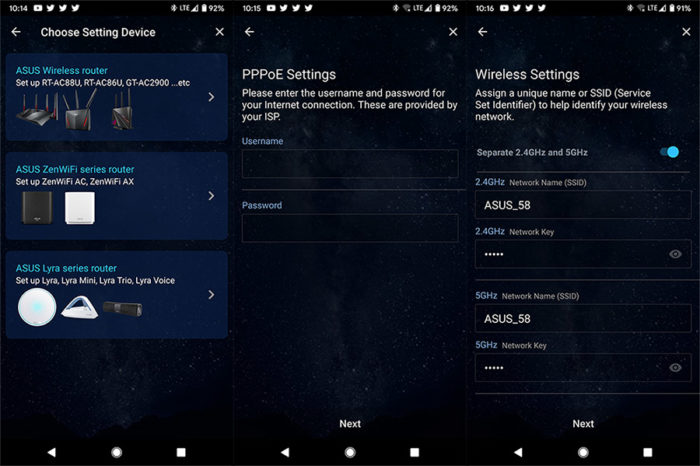 I decided to tap on Start (you also get the option to Set it up manually) and I was asked to enter the ISP username and password (my Internet connection is PPPoE), followed by the Wireless Settings setup window (you can choose whether you want the two bands to be separate and select the SSID and passkey for each network) and, lastly, I had to insert a new Login Name and Password (don’t leave it admin for security reasons). After the settings are applied to the router (the entire process is very quick), I could Enable the Remote Connection and gain access to the app UI.


The application is the same as on the Asus RT-AX58U, so the Home window will also display the AiMesh status (whether the router is a part of the AiMesh network and if there are any additional nodes), but you can also see the Internet Status and go to the Wi-Fi Settings. The second main section is the Devices, where you can see All the connected devices (including the router, any nodes and the Offline clients) and you can go to an AiMesh dedicated list. If you click on any client, it will display some info (such as the Mac and IP address, the Interface and Connection quality), but you can also see the Real-time traffic, Block the Internet Access or enable the Bandwidth Limiter; clicking on the router, will allow you to change the location, view the firmware and see other important info about the device. 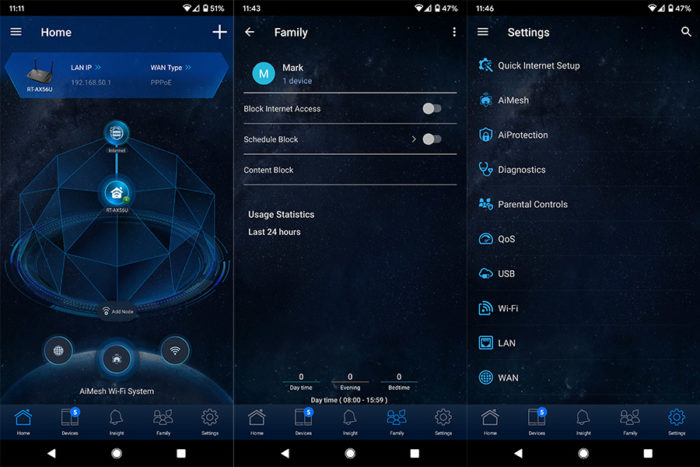 The third section is Insight, where you are guided to change to the https protocol, access the Family Members or enable the AiProtection. You can also go directly to the Family section (same as from the Insight), where you can add a new profile, select the devices under said profile and a dedicated page will display the Usage Statistics over the last 24 hours (as well as the Top used apps), but you can also immediately Block the Internet Access, Schedule a Block or select the type of Content that will be inaccessible. Lastly, there’s the Settings section, where you can set up the AiMesh, Enable AiProtection, view Diagnostics, set QoS (can only enable it and set the Bandwidth Limiter), configure the USB protocols, set up the WiFi (pretty much the same as on the Asus RT-AX58U – I like that it includes a Black List), the LAN and WAN settings, upgrade the Firmware, set the Wake on LAN (from Network Tools) and more.


As expected from Asus, the app is quite comprehensive, so let’s have a look at the browser-based interface. Once again, the user interface is the same as on the RT-AX58U, with the settings grouped in two section, General and Advanced Settings. The General section will have pretty much the same options as the app, but everything is a bit more in-depth – for example, the AiProtection will now allow you to Scan your router for vulnerabilities, to enable the Malicious Sites Blocking, the Two-Way IPS and the Infected Device Prevention and Blocking (this is something that other manufacturers rarely keep free of charge, if they include it at all). 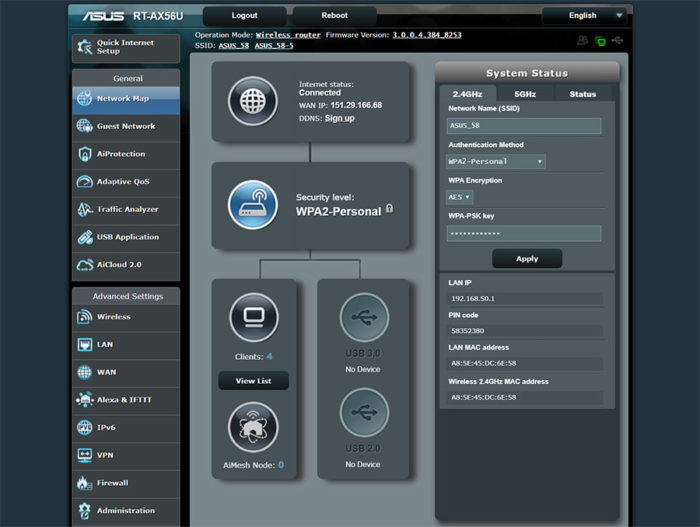 The Advanced Settings will go a lot deeper with the Wireless settings (which will now include a Professional section where you can properly adjust pretty much every aspect of each radio band, a Roaming Block List, as well as WPS and WDS) and the LAN and WAN settings (will include IPTV, Dual-WAN, NAT Passthrough and Virtual Server/Port Forwarding).
Further down, you can see that Asus has included Alexa and IFTTT as part of the interface and there’s also IPv6, VPN (PPTP, OpenVPN and IPSec VPN) and Firewall (also includes DoS protection, IPv6 Firewall, as well as URL, Keyword and Network Services Filters).


Conclusion
Despite being the entry-level model, the Asus RT-AX56U is a very capable WiFi 6 router and perhaps the perfect way to get a taste of the new WiFi technology and not only because the price tag is more affordable than its more powerful siblings, but because it works fine with both AC and AX clients. Indeed, I have not experienced the same stability issues that I had with the Asus RT-AX58U when connecting clients with an ASUS PCE-AC88 WiFi adapter and, overall, the wireless performance was excellent for the most part. So, should you get a good enough 802.11ac router now and upgrade later when the WiFi 6 gets more widespread or is the RT-AX56U positioned at the right moment to call for an equipment upgrade? The price is decent, the performance is there and the software is quick and rich in options, so, yes, it’s not a bad time to give WiFi 6 a chance, especially if you’ve been waiting for an upgrade for a while. 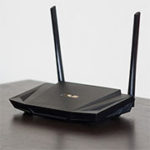