The ASUS RT-AX58U (RT-AX3000) is somewhere in the middle of the ‘budget’ WiFi 6 router series from ASUS, immediately after the ‘flagship’ RT-AX88U, but better equipped than the slightly less powerful RT-AX56U and, considering that most of the time, it’s priced somewhere near the RT-AC86U, I think it’s a nice manner to ease your way in this new WiFi standard.

Well, you’re not really going to see any difference if you’re still going to use devices that don’t support WiFi 6, but that will change at some point (it depends on how often you change your phone, your laptop and other WiFi-capable devices). Before we go any further, is the ASUS RT-AX58U a part of the ‘draft’ stage, therefore lacking some of the advertised key features? The RT-AX58U is not WiFi 6 Certified, but this certification is granular, so, similarly to the WAVE 1 and 2 of the 802.11ac standard, most features are implemented, but more will come afterwards (and in better forms). 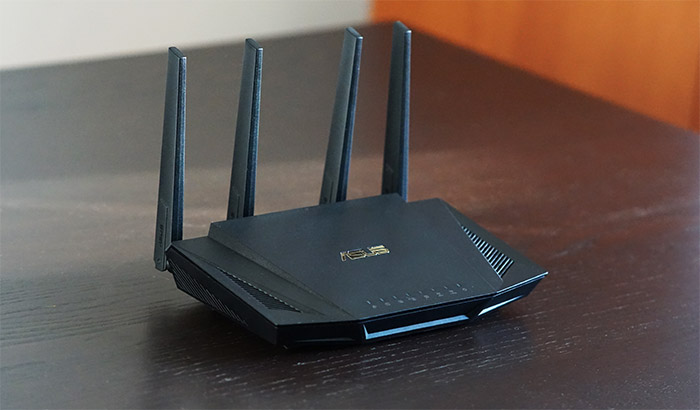 If you are an early adopter of this new tech and already have some devices with an AX WiFi adapter, the ASUS RT-AC58U promises to offer the OFDMA technique which subdivides a channel for multi-user access (should not be mistaken for MU-MIMO), the support for both 160MHz bandwidth and 1024-QAM modulation and some other goodies to improve the wireless performance and the bandwidth – of course, ASUS also added the support for AiMesh, so it hasn’t given up on the dream.

UPDATE 03.15.2021: Almost a year later, the problems with the 160MHz channel bandwidth still persist and I have added a few graphs to get a better idea about what to expect if you need to use the RT-AX58U at its full power. The router has been updated to the latest firmware (v3.0.0.4.386.42095) before running the throughput tests.

Design
The Asus RT-AX88U is clearly sharing the same case as the RT-AC88U (besides some color accents, they’re pretty much identical), but the Asus RT-AX58U doesn’t have the look of the good ol’RT-AC58U. Instead, it went with a completely new design, going for a more aggressive appearance, with lots of sharp angles on the top surface and with a couple of ventilation grills pointing upwards, so the entire case resembles a sports car hood. It’s not a ‘gaming router’, so there are no red accents, but only the usual matte black finish, which is very soft to the touch, and the Asus logo is now golden (upgraded from silver). 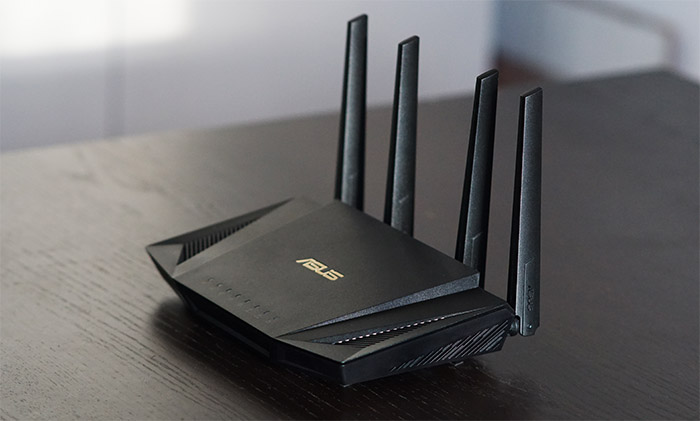 Before unboxing it, I expected the router to be large and imposing, but no, it’s actually a lot more compact than your regular routers which is interesting considering that it’s supposed to be far more powerful than the dual-band AC alternatives.
This means that at its 8.8 x 5.0 x 6.3 inches, the RT-AX58U (RT-AX3000) occupies far less space than the RT-AX88U, but, despite being smaller, it still has a larger footprint than the Asus RT-AC86U (or the RT-AC68U). Well, the latter does sit vertically, so it doesn’t require much space from your desk, but the RT-AX58U does has the advantage of being able to be mounted on the wall or the ceiling. That’s right, on the bottom of the device, there are two mounting holes, so you’re not forced to keep the router on the table and that’s very useful especially in an office.

It’s worth mentioning that if you decide to keep it on your desk, the RT-AX58U is not going to move around regardless of how many cables you connect to its rear end and that’s thanks to the four silicone feet (and its weight of 18.9 ounces). Well, since we’re still staring at the bottom of the router, it’s also worth noting the huge amount of ventilation cut-outs and you can get a peak at a large heatsink, so Asus seems to have taken very seriously the heat management of this device. That’s not all, since you can also see some vent cut-outs on the sides, as well as on the rear side, next to the top surface. 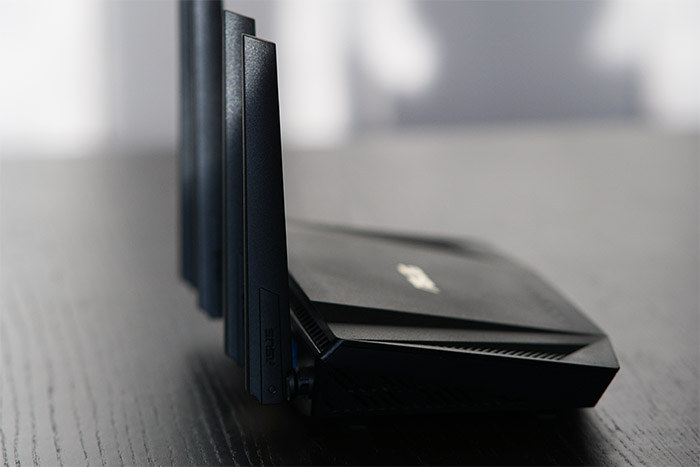 But is this enough to ensure a decent internal temperature? It’s true that the device is very compact and the internal components are quite powerful, which means that the wireless router does indeed get warm (warmer than the RT-AC86U), but, so far, there are no signs that it may overheat (it could happen after it ages a bit, but for now, everything is fine temperature-wise). One element that has taken me by surprise is the fact that the four antennas are not removable and that’s unexpected on a device at a relatively high price tag – I mean, I doubt that many of you have actually replaced the antennas of your router, but, still, you’re paying some significant amount of cash for this device, so you’re allowed to nitpick.

On the top of the Asus RT-AX58U, towards the front, there are eight LED indicators that show the status of the device (and the network): from the left, there’s the WAN LED followed by four LED, each corresponding to one LAN Ethernet port; the last three LEDs show the status of the 5GHz network, the 2.4GHz network (when the LED flashes, it means that the data is being transmitted) and the Power. 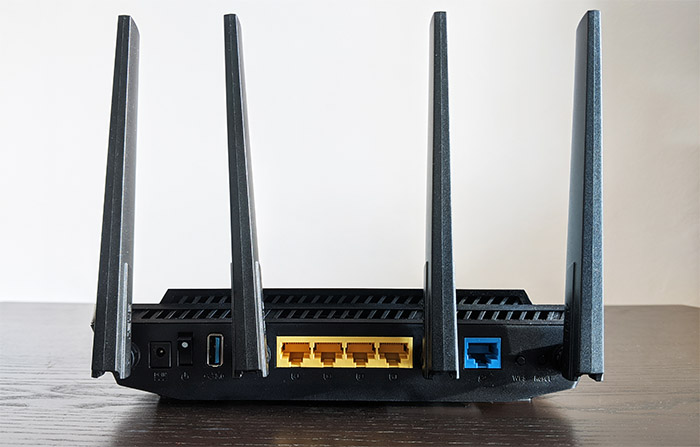 I hope the wireless router will keep this array indefinitely and not be tempted by the ‘minimalist’ move to replace it with a single LED which is completely unintuitive. Moving on to the rear side, we find a Power port (there is a Power brick inside the package), an On/Off switch, a USB 3.1 Gen 1, four Gigabit Ethernet ports (only the premium RT-AX88U has eight LAN ports), a Gigabit WAN port, a WPS buttons and a recessed Reset button (press and hold it for about 10 seconds to return the device to factory default settings).

Internal Hardware
To open the router, you need to remove the four screws from underneath the pads that cover the feet and then carefully detach the top cover (be aware that doing so could void the warranty). This way, you will be able to see the PCB which is covered by two separate large aluminum heatsinks – remove the screws to get them out of the way and you should get a view of the antenna connectors and a couple of metallic covers that can easily be removed to expose the first set of components. 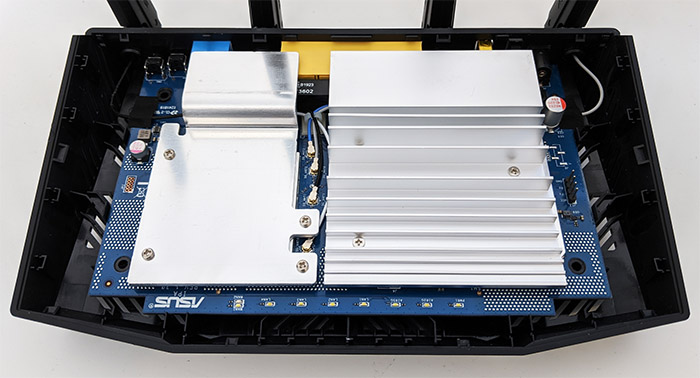 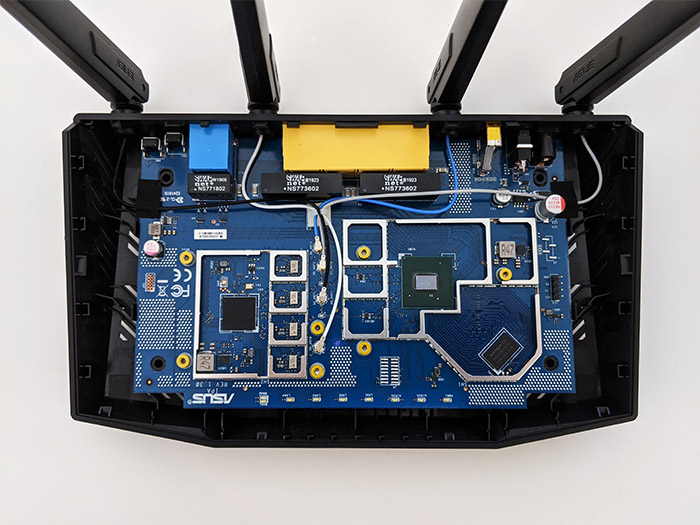 Features and Performance
Since this is my first AX router to test, let’s have a look at some of the WiFi 6 features that the Asus RT-AX58U can use. First, there’s the OFDMA (Orthogonal Frequency Division Multiple Access) which is one of the most important improvements over the last WiFi generation and its role is to divide a channel into multiple smaller sub-channels that gets shared with up to 30 devices at the same time, so less bandwidth is wasted (the previous implementation gave each client its own entire channel and other devices had to wait their turn until the client transmission was completed) – it’s important to know that OFDMA works both downstream and upstream.

The MU-MIMO technology has also seen an improvement, now being able to serve eight simultaneous client devices instead of a maximum of four (on the WiFi5), but the RT-AX58U is stuck with a 2×2 MU-MIMO configuration and that’s not really that bad considering that most devices don’t support MU-MIMO and those that do rarely go above 2×2 (mostly, some high-end laptops).
You do get the 1024-QAM technology which should ensure an increase of about 25 percent in data rate over the WiFi 5, but you will see a better throughput only in close proximity to the client, when the interference is kept to a minimum and most importantly, the client devices need to be equipped with compatible WiFi adapters. That’s also the case with MU-MIMO, the 160MHz bandwidth support and the BeamForming technology (which has the role of targeting the signal at the connected clients instead of broadcasting it everywhere). 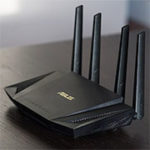