The Partu BS-08 air purifier is a cool-looking, compact device suitable for small rooms (no more than 130 square feet) which relies on a True HEPA filter (including an Activated Carbon filter and a prefilter) to safeguard you from most common potentially harmful particles (which includes pollen, dust, smoke and so on, the filtering being made for particles as small as 0.3 microns).

This is not the first air purifier developed by Partu and there is an entire series of devices to choose from, but there are also lots of other devices that directly compete against the BS-08 (some from far larger and older brands), so does it have the means to rise above the herd?
Well, the manufacturer claims that the Partu BS-08 is one of the most silent air purifiers on the market (of course, on the first fan level) and that can be a big plus considering that not all people like to sleep with white noise; there’s also RGB, if you’re into that sort of thing and the control panel is very cool looking. 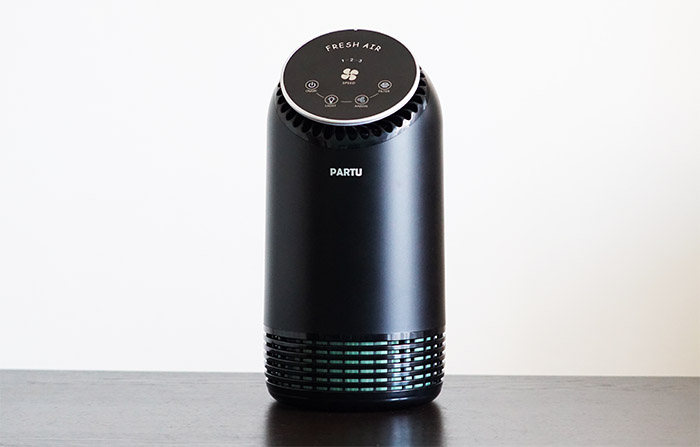 I also noticed that besides the HEPA filtration, Partu says that the device is Ozone free which is great, but that can change if you decide to use the Anion function (as an optional feature) for improving the air in the room and it’s a bit of a controversial technology due to ozone released in the air, of which we’ll talk about in a bit (the Functionality section). That being said, let’s have a closer look at the Partu BS-08 and see if it’s worth considering for keeping the air clean in a smaller room.

Design and Build Quality
A quick glance at the Partu BS-08 will immediately give away that we’re dealing with an air purifier, so the manufacturer didn’t try to make it minimalist or unobtrusive, not at all, instead it proudly shows that it’s a modern piece of technology. It’s still a bit low profile if you decide to turn off the LED light due to the black matte finish and size-wise, it’s also about three times smaller than the Levoit LV-H133. Indeed, the bean-shaped device measures only 17 x 9.6 x 9.6 inches and it weighs 6.6 pounds, so it’s quite easy to move around your house. Since it’s fairly compact, I decided to keep it on a small desk, but you can very well leave it on the ground without worrying that it may move around due to the four silicone feet from the bottom side – it also has its weight reasonably distributed, so it won’t tip over when lightly pushed. 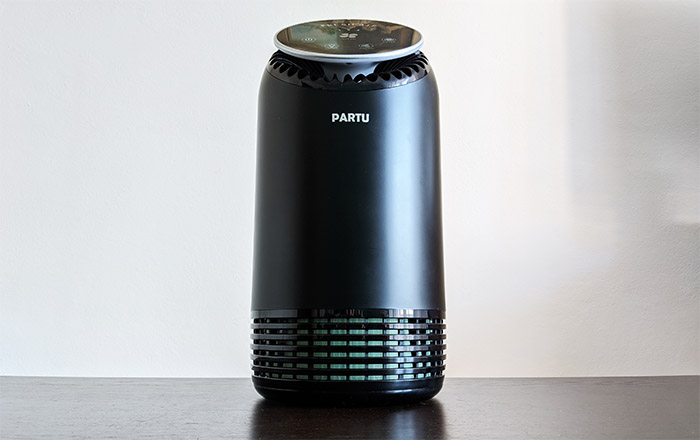 The entire case is made of hard plastic with a few ventilation grills towards the bottom and at the top, the manufacturer decided to add a touch-sensitive panel to allow you to control the way the device will function. This panel is tilted at about 45 degrees and it’s not embedded within the body of the air purifier, instead, it looks like it hovers above it, leaving some room for the air to be pushed out through the top-facing cut-outs (this way, the air gets quickly distributed over a larger area instead of a single point, as with many other air purifiers). Most of the controls panel is covered by a silver finish, but the touch-sensitive part is black with silver icons – the icons are very large and it seems that the manufacturer really likes the Comic Sans font. I found that the panel is quite reactive and it allows you to turn ON and Off the air purifier, to adjust the speed, the light, to enable the Anion functionality and it will let you know when it’s time to replace the filter.

The Speed button moves through three levels: the first level is where the fan spins the quietest, so you’ll have no trouble sleeping with it functioning in the background (the sound is at around 25dB – I live in an unreasonably noisy building, so I had to take it to another location in order to measure the sound level), while the second level gets clearly noticeable in both airflow and noise (a few inches near the device, I measured around 43 dB). 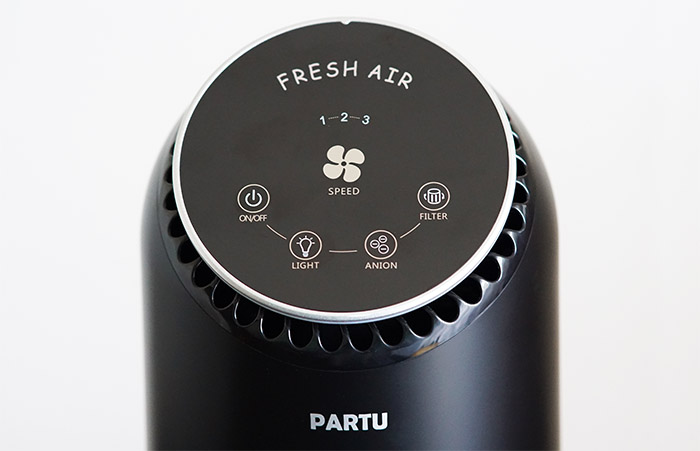 The third level is the noisiest (I measured around 58 dB very close to the device), but it’s also the quickest at filtering the air. Underneath the Speed icon and next to the On/Off button, there’s the Light icon which, when the device is turned on, will be enabled by default and the LED will immediately cycle through various available colors – you can leave it like that or you can press the Light button once to remain on that preferred color – to turn it off, press the Light button once more.

The third bottom button enables the Anion function which apparently, has the role of removing odor from the room and to reduce the dust in the air (but, as we’ll see in the next section, I would steer clear of this function). Lastly, there’s the Filter icon which, if everything is fine, it will remain disabled. When it’s time to change the filter, the LED will light up to let you know – of course, it doesn’t rely on a special sensor that can accurately sense that the filters are worn out and, instead, it’s just a timer, so I would take this notification more like a suggestion and not an urgent necessity, especially if you’re not using the air purifier that often. Still, you should still replace the HEPA filter regularly to ensure that the air is filtered properly – check if the device has gotten noisier and if the device stops being as efficient as the day you took it out of the package. 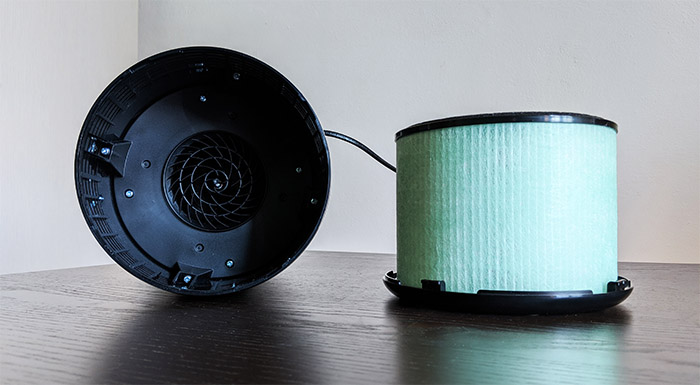 As with most other air purifiers, make sure to remove the plastic bag from the filter before powering on the device: to do so, put the device on its side and on the bottom, you’ll notice what resembles a handle – move it counterclockwise to remove the bottom section. These are also the steps that you need to take if you want to replace the filter, but don’t forget to press and hold the Filter icon for three seconds to reset it.
Note: Even if you turn off the device, it will remember the previously set configuration.

Features and Functionality
The Partu air purifier was designed to be able to cover an area no larger than 130 square feet, so don’t expect this compact device to cover an entire apartment, it’s just for a smaller room – the device is CADR rated at 104m³/hr, which one again enforces that it’s suitable for a more reduced area, if the size of the device didn’t already give it away. One of the main features that one should look for (besides the covered area) is the type of filters that it uses and the Partu BS-08 air purifier does offer the expected HEPA filtration system which consists of a finer pre-filter that’s suitable for capturing large particles (between 3 and 10 micron) and then, there’s the True HEPA filter which should be able to capture 99.97% of particles (as small as 0.3 microns and PM 2.5). 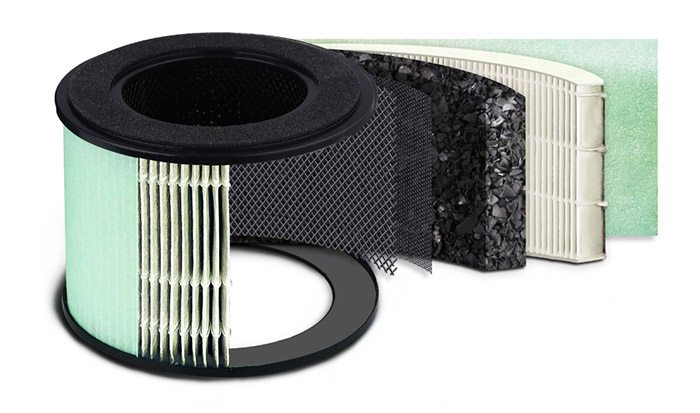 Of course, this is a genuine claim due to the standardized HEPA filter and it’s to show how important it is that when you decide to purchase an air purifier, to make sure that it uses certified True HEPA filters and not any third-party variants which may or may not rise up to their claims. The last part of the filter is the Activated Carbon Filter that was designed to remove bad odors from the room and absorb any contaminants (should do great with smoke or cooking odor).

Besides the True HEPA filter, always make sure to check if you can easily find additional filters to purchase and whether the price is acceptable (some companies keep the price of the air purifier low, while selling expensive filters). I noticed that the manufacturer says that the device is 100% ozone free and that’s a good thing to know about an air purifier, but then there’s the Anion function which clearly negates the previous claim. Well, kind of, because by default, the Partu air purifier doesn’t use this function and it appears as something optional. This technology relies on negatively charge ions that get released in the air to electrify the dust particles and then these should be attracted to some plates inside the device; this way, you should get less dust (and other similar particles), therefore a cleaner air, but there are some problems with this approach.

First, the charged particles don’t all end up inside the air purifier and this way you can get it stuck to walls, TVs or furniture (unless there’s a powerful dedicated fan which Partu does not have) and secondly, this method is known to release ozone in the air which has the potential to become harmful. Of course, there are some allowed limits set by the California Air Resources Board (CARB) which say that the ozone concentration shouldn’t exceed 0.05 ppm, but this is for a single device, so running multiple such air purifiers will quickly raise these levels. So, as an asthmatic, I am not really a fan of this feature, so I will keep it disabled.

The building where I currently live is in a relatively peaceful area which means that the air is quite clean, but there is the occasional smoke creeping through the windows during the summer, so I decided to simulate a polluted environment inside a smaller room (about 210 square feet) and then left the Partu air purifier to deal with the smoke: it took the device about an hour and a half to completely clean the air while the speed was set to the second level. Furthermore, I decided to check its power consumption and to do so, I used a Gosund smart plug; this way, when the fan was set at the first level, the power consumption was at 7.8W, at level 2, the device needed to draw 15W and at the third level, it required 35.4W. What’s interesting is that enabling the Anion feature didn’t seem to make any difference in the power consumption.

Conclusion
The Partu BS-08 air purifier was clearly designed to be used in a smaller room and it does its job really well, relying on a True HEPA filter (along with a prefilter and the active carbon) to quickly clear the air from potentially harmful particles. I really liked the reactive controls panel, which is very intuitive and even the LED lights are a nice touch, so, all in all, it works great as an air purifier, but I’m not really a fan of the Anion method. Still, it’s up to you whether you need this function, so, if you’re in the market for this type of device and don’t need to cover a larger spare, you should definitely check out the Partu air purifier. 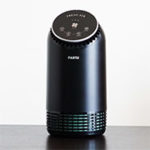