The problem is that you need compatible clients to actually see the improvement and since most of us don’t have a single AX device in our house, it may take a while until this technology becomes the norm. The MU-MIMO technology can also be found on both routers, but, just as with the 1024-QAM, you do need compatible clients and even if this tech has been around for quite some time, not many WiFi cards or adapters support it. BeamForming is also worth mentioning since it’s a features that both routers share and it does help with focusing the signal towards the compatible clients instead of broadcasting it everywhere and lastly, both the Asus RT-AC86U and the RT-AX58U support AiMesh. If you’re not familiar with it, AiMesh was developed to be an alternative to the consumer-based WiFi mesh systems (such as Google WiFi or Netgear Orbi) and it allows the user to make use of various Asus routers (which don’t have to be identical) and create a system of multiple mesh nodes (each router will act as a node).

This way, if you have an older Asus router that you don’t need anymore, don’t just throw it away, but add it as a node next to a more powerful and newer Asus router. I have tested AiMesh with an Asus RT-AC86U and a RT-AC68U, but the setup system and the speed were a bit of a letdown and I also tested a WiFi 6 AiMesh system which consisted of an Asus RT-AX58U and an Asus RT-AX56U and the setup process was a lot faster and painless and the wireless speed performance was also decent, on par with some other dual-band WiFi mesh system (which do cost a lot less) – you can check the article here to see the test results.


To compare the wireless performance of the Asus RT-AC86U and the RT-AX58U, I tested each of the two routers by relying on two computers, one connected directly to the Asus router itself (using a CAT6 cable) which will act as the server and the other is connected wirelessly and will act as the server. It’s important to mention that I tested the Asus RT-AC86U on the 80MHz channel bandwidth and that the Asus RT-AX58U can go up to 160MHz, but the throughput was not stable when I had the client equipped with an Asus PCE-AC88 WiFi adapter or a TP-Link TX3000E AX3000 adapter, so I will use the results that I got on the 80MHz channel bandwidth as well which are the most stable. That being said, while the Asus RT-AC86U was connected to client equipped with an Asus PCE-AC88 WiFi adapter, I saw an average of 792 Mbps at 5 feet (on the 5GHz band, from the client to the server) and, at 30 feet, the speed remained consistent at around 740 Mbps. 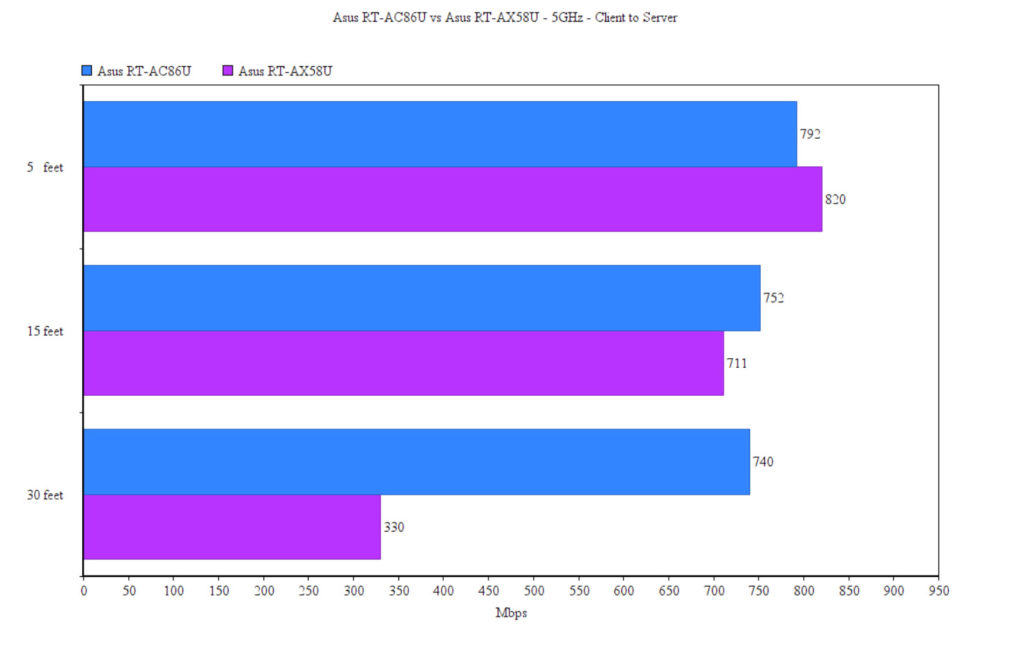 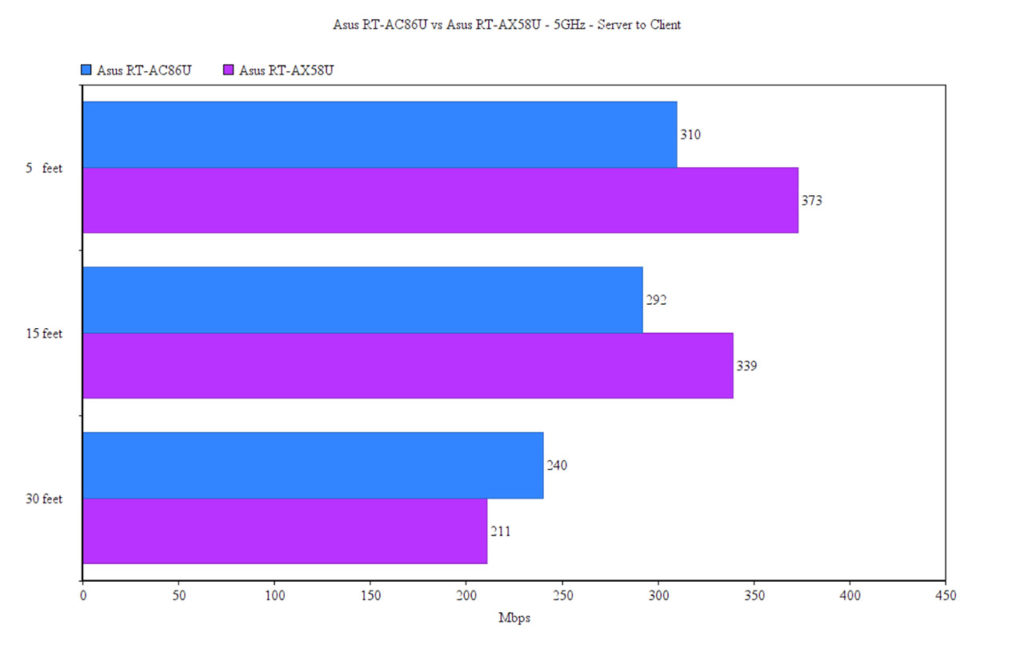 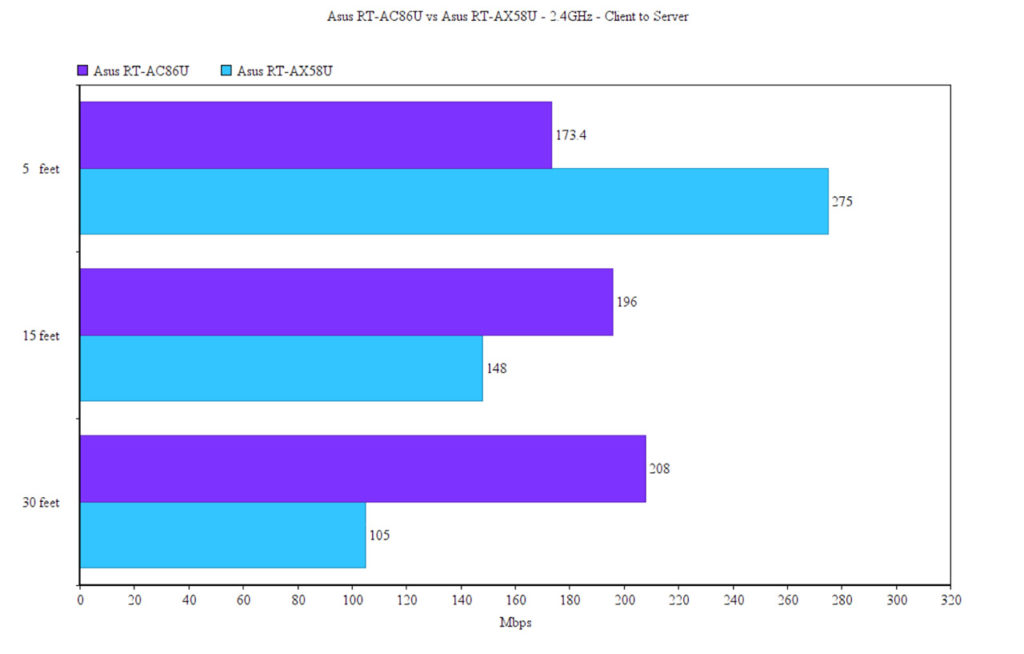 Verdict: The Asus RT-AX58U has the potential to be the better performing router, but, in its current form, it does have some issues on the 160 channel bandwidth (when the client has a PCIe WiFi adapter), so, considering that the Asus RT-AC86U is a lot more stable, it does win this round (as I mentioned before, Asus does update the RT-AX58U very often and we may see it outperforming the RT-AC86U).


Software and Configuration
Since both the RT-AX58U and the RT-AC86U are Asus routers, the initial setup process is going to be pretty much identical: either use the dedicated app or the web-based interface – I chose the former since it’s option most will go for – and, after following the instructions to set up the Internet connection (requires the ISP name and the password), the admin account and the WiFi networks, I could immediately connect my wired and wireless clients to the router. Asus has updated the look of the mobile application over the years, so there’s a similar layout for both routers, the Home section showing a graphical representation of the network (it will display any AiMesh node that you may have added), the Real-time traffic and, if you’re using the Asus RT-AX58U, the third tab will show the WiFi Settings. The RT-AC86U is a gaming-focused router, so Asus has added a quick access link to the Mobile Game Mode (as the third tab) and, if you enable this mode, the Adaptive QoS will be disabled, temporarily pushing the device you’re using to the highest priority. 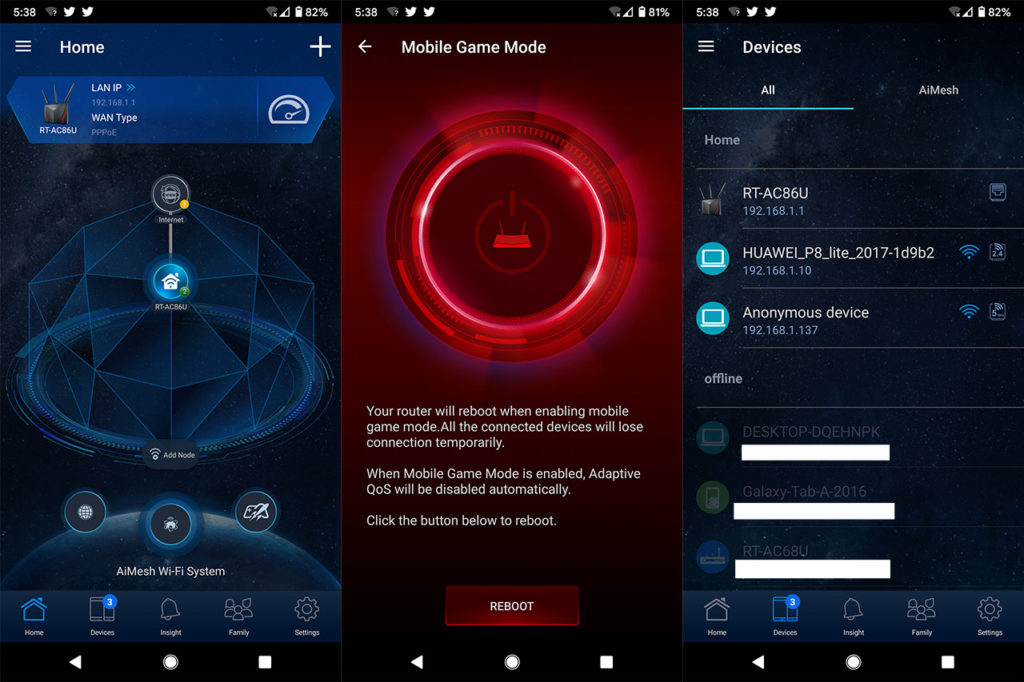 The rest of the app is very similar for both routers, so you get to see all the connected Devices, to manage the Family profiles (a basic form of Parental Controls, where you can add devices to each profile and either immediately block the access to the Internet or set a scheduled block – there are more options on the web-based UI) and you also get a Settings section, where you can go a bit more in-depth with the configuration (includes upgrading the firmware, setting up the notifications, enabling QoS and limiting the bandwidth, enabling AiProtection, adjusting the storage-related settings and more). 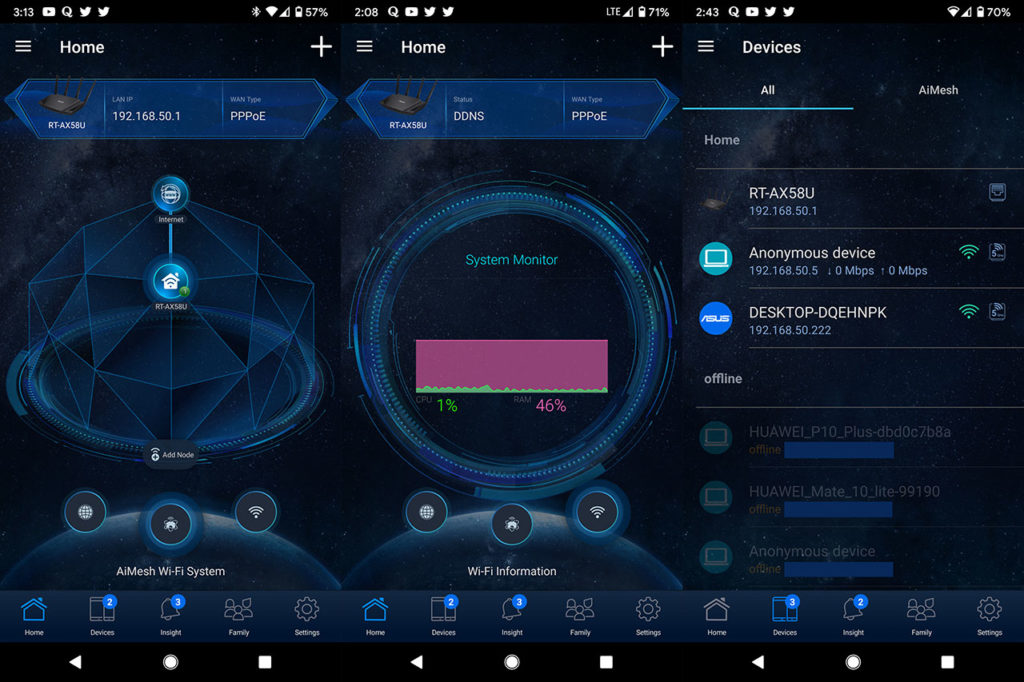 The web-based interface will also be very similar on the Asus RT-AC86U and the RT-AX58U, both routers offering better Parental Controls under a more comprehensive AiProtection section, where you can set the type of traffic that you want to be blocked; there’s also the option to set the Two-Way IPS and the Infected Device Prevention and Blocking (useful to prevent DDoS attacks and it checks for malicious incoming packets, as well as suspicious outgoing packets that may come from an already compromised device in your network) and you do get the option to set a dongle or an Android smarthpone as a USB modem.

Furthermore, there is a lot more control for your WiFi networks (includes a Professional section, where you can tweak a lot more options than on the app), the ability to set up a dual-WAN system, which includes both the Load Balance mode (you distribute the load between a primary and a secondary WAN) and the FailOver + FailBack possibility (in case your primary WAN connection fails, the router will automatically switch to the secondary WAN and, after the primary connection gets online, the FailBack mode ensures that you get switched back to the primary connection) and you can set a VPN Server and Client (PPTP, OpenVPN and IPSec VPN). It’s worth noting that the Asus RT-AC86U does come with VPN hardware acceleration, while the Asus RT-AX58U does not, so, when using OpenVPN, you would only get about 100Mbps (which is not bad), just underneath the AC86U’s performance. 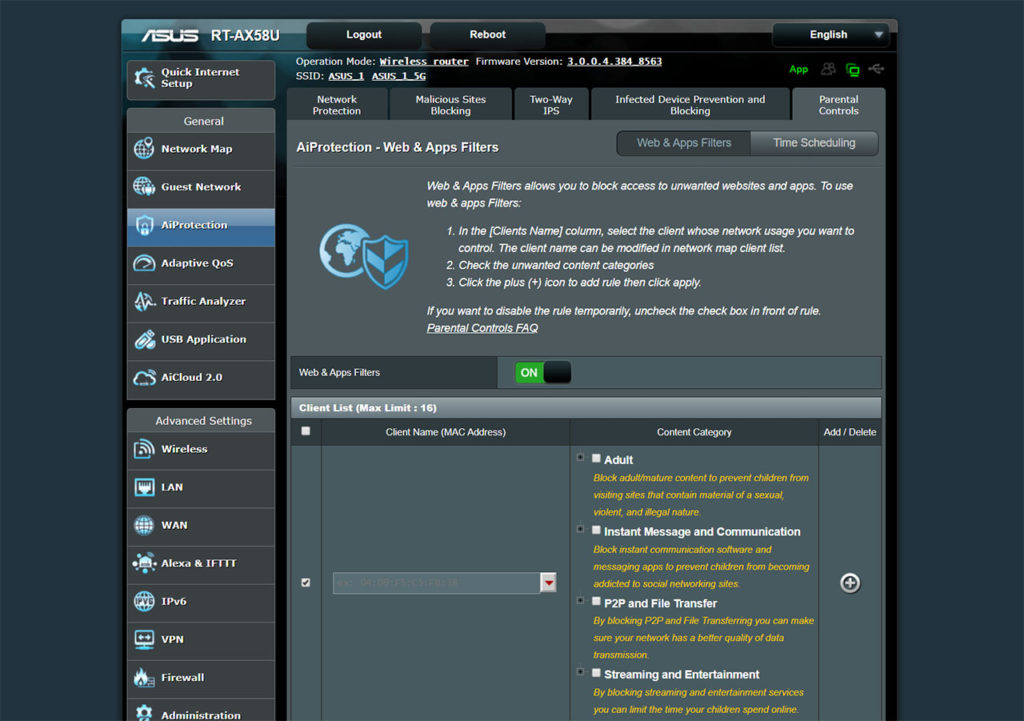 Additionally, the Asus RT-AC86U does offer the WTFast Gamers Private Network which, as the name suggests, it is a private network for gamers which should improve the online gaming experience by lowering the latency and you will see a difference if you’re very far from the servers you play on, otherwise, it’s not really going to help much.
Verdict: Setting up either routers is quick and easy to do, both routers use the same app and the web-based interface is very similar, but, the Asus RT-AC86U does have a few additional features, so it wins this round.

Conclusion
There are some significant advantages that the Asus RT-AC86U has over the RT-AX58U, such as the better storage and VPN performance, the wireless performance is also a bit better (yes, the RT-AX58U supports the 160MHz channel bandwidth, but, at least for me, it has proven to be very unstable with some WiFi adapters), it is supported by Merlin and, since most of our devices are still on the 802.11ac (or even 802.11n) WiFi standard, some of you may see it as too soon to go for a WiFi 6 router. And you wouldn’t really be wrong, but the Asus RT-AX58U has newer hardware and the manufacturer is very keen on fixing any issue that the router may have, so it is only a matter of time until the RT-AX58U will be as stable as the RT-AC86U, while also offering some of the newer features of the WiFi 6 standard and make no mistake, we will see a lot more clients with the newer WiFi standard, it’s just going to take a while until choosing an AX router over an AC one becomes a no-brainer.