Besides being a part of different WiFi standards, the Asus RT-AX58U and the Asus RT-AC86U do have some elements in common (such as the 1024-QAM, BeamForming and MU-MIMO) and even cost-wise, they’re not that different (at the moment), so is this the right time to switch to the newer WiFi 6 standard or is it too soon and we should still remain in the comfortable arms of the WiFi 5 standard?
Despite being a bit over two-years old, the Asus RT-AC86U still remains a user favorite due to its powerful CPU, excellent wireless performance and VPN support and yes, it never was the flagship model, nor did it display the latest technological developments (of those times), but, it was a very balanced device and it was compatible with the Merlin third-party software so, considering that the price was (and still is) right, it’s a hard device to beat, especially by a WiFi 6 router that hasn’t yet proven its value. 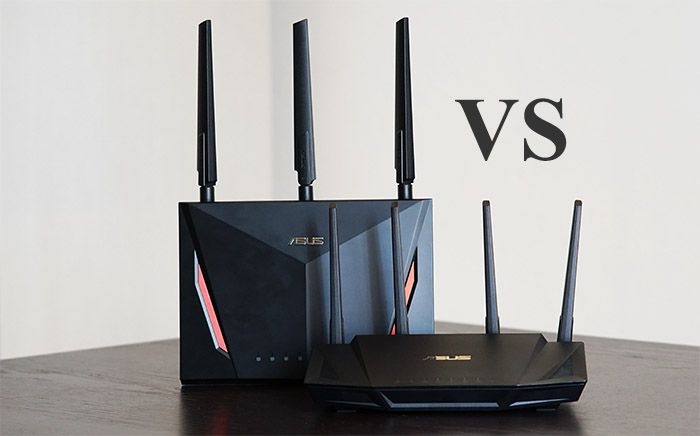 Indeed, there is still a long way until the new WiFi standard becomes the norm and devices such as the Asus RT-AX58U are given the heavy burden of persuading the user that it’s worth leaving behind an already working model for unknown results, especially in the long term. Asus does update very often the Asus RT-AX58U and, when I tested the router, I saw an excellent wireless performance (especially on the 80MHz bandwidth mode), but there are also some issues that still need to be ironed out. That being said, let’s see how the older Asus RT-AC86U stands when put next to the Asus RT-AX58U (RT-AX3000), the current mid-range AX model and if it’s worth upgrading to the newer WiFi 6 standard.

Note: You can also check out the individual analysis of each mesh WiFi system here: Asus RT-AX58U and Asus RT-AC86U.


Design and Build Quality
When the Asus RT-AC86U came out, I was impressed by how compact it was considering the powerful internal hardware and that Asus has managed to maintain the same dimensions and the look of the Asus RT-AC68U (it measures 8.6 x 6.3 x 3.2 inches). But then came the Asus RT-AX58U with an even smaller case (measures 8.8 x 5.0 x 6.3 inches), but even so, it does occupy more space from the desk than the RT-AC86U and the reason for that is because the aforementioned router was built to sit vertically. So, just like the RT-AC68U, the RT-AC86U has three antennas pointing upwards and a built-in stand (that cannot be removed) to keep the device in its place, regardless of the number of cables are connected. But, unlike the plain front of the RT-AC68U, the RT-AC86U has an Y shaped front with a couple of red sections which, according to Asus, should qualify it as being a part of the gaming series (of course, there are some gaming-specific feature built into the software as well). 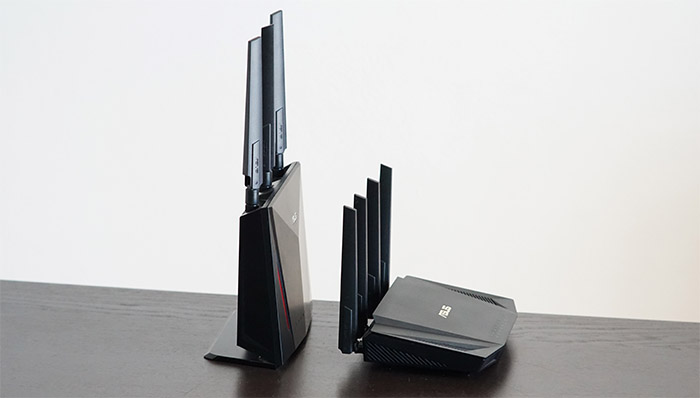 The Asus RT-AX58U is perhaps a bit less interesting design-wise, featuring a black matte finish and a couple of ventilation areas on the top surface, but it does proudly points four antennas upwards which, unfortunately cannot be removed (the three antennas on the RT-AC86U can be replaced). The router is built to stay horizontally, but unlike the RT-AC86U, it does have a couple of dedicated holes on the bottom for mounting it on the wall (it’s quite important when you’re in an office and every inch matters). Furthermore, the RT-AX58U is a lot more generous with the ventilation areas, entirely covering the rear, the lateral sides and a part of the rear side with fairly large cut-outs. Even so, the router does get quite warm, especially when under a heavier load. The Asus RT-AC86U did borough the shape and size of the RT-AC68U, but, while the latter would often struggle to keep the temperature at a decent level, the RT-AC86U would rarely get only a bit warm near the antennas, regardless of how many or how heavy applications you would run on it.

Both the Asus RT-AX58U and the RT-AC86U have eight LED indicators to show the status of the device and the network: a Power LED, four LAN LEDs (one for each LAN port), the Internet connection LED and two LEDs for the WiFi bands (2.4 and 5GHz), so it’s nice to see that Asus did not decide to push the single LED approach into its routers, thus keeping the far more intuitive array of LEDs. As for the buttons and ports, both routers have a similar set, but positioned very differently. The Asus RT-AC86U has populated the rear area, above the gap towards the built-in stand: there are four Ethernet LAN ports (Gigabit), a WAN port, two USB ports, one USB 2.0 and the other USB 3.0, a Reset and Power button, while on the right side of the router, you’ll be able to find a WPS button and a WiFi switch. The ports area on the rear side of the Asus RT-AX58U is less refined (lacks the ports contours and the metallic plates surrounding the LAN ports), but everything is in its place, so you’ll going to find a Power port, a Power switch a USB 3.0 port, four Ethernet LAN ports (Gigabit), a WAN port, a WPS buttons and a Reset button.

Verdict: Despite being limited by the vertical-only position, I did find the Asus RT-AC86U to be more refined than the RT-AX58U and there is just a lot more attention to details design-wise – the removable antennas are also a plus. At the same time, the Asus RT-AX58U is a lot smaller and it does have a neutral look, so it’s easier to go unnoticed in a living-room. Other than that, both routers have the same number of ports (the RT-AC86U does have an additional USB port, although I doubt many will make use of it) and neither overheats, so this round ends in a tie.


Internal Hardware
The Asus RT-AC86U is build on the Broadcom platform, so it features a dual-band BCM4906 chip clocked at 1.8GHz, 512 MB of RAM (from Micron) and 256 MB of flash memory (from Macronix). Additionally, the router uses the Broadcom BCM4365E 3×3:3 SoC (802.11a/b/g/n) for the 2.4GHz WiFi performance and the Broadcom BCM4366E 4×4:4 SoC (a/b/g/n/ac) for the 5GHz radio – it’s interesting to see that while the router does have three external antennas, it seems that it has a fourth internal antenna for improving the 5GHz quad-stream performance.


Features and Performance
The WiFi 6 standard does come with some significant improvements over the last generation, offering a more efficient use of the available bandwidth by relying on OFDMA and the MU-MIMO technology (which is pushed to 8×8), there is also noticeable improvement in the wireless speed performance department due to the 1024-QAM modulation and the range is also far better. The Asus RT-AX58U is a WiFi 6 router, but it’s just part of the draft stage (it’s not WiFi 6 certified) which means that you do get some of the available features, but it also means that very soon, you will see Asus routers with a better implementation of the newer technologies and with more features available. 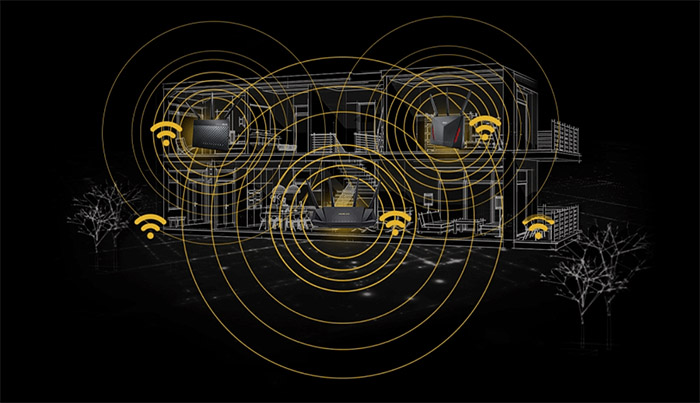 That being said, the Asus RT-AX58U does make use of the Orthogonal Frequency Division Multiple Access (OFDMA) to divide a channel into multiple smaller sub-carriers, which are then divided into groups of sub-carriers forming resource blocks that are allocated to up to 30 devices simultaneously and yes, this technology works both upstream and downstream. With older devices, which does include the Asus RT-AC86U, each client would be assigned to a sub-carrier one at a time, without taking into account any frequency-based scheduling, making it less efficient.
Next, the Asus RT-AX58U supports the 1024-QAM technology that has the role of improving the throughput capabilities of the router and I know that this technology is a highlighted feature for the WiFi 6, but Asus has been taking advantage of the NitroQAM (1024-QAM) for a while now and yes, the Asus RT-AC86U does have it implemented as well.