Still, the most settings you’re going to find under Configure, where you can manage the SSIDs: you can add multiple SSIDs and you can change the settings of an existing one, such as the Security Type (includes WPA3 – it also generates WiFi QR access codes), enabling the 802.11r (Fast Roaming) and the 802.11w (Protected Managed Frame) standards, changing the Client IP Mode (Bridge or NAT Mode), selecting the VLAN ID, L2 Isolation and Band Steering; there is also Traffic Shaping (sets Download and Upload limits), the Captive Portal which has various Authentication Types (including EnGenius Authentication, RADIUS, Voucher-based and Social Login), as well as the possibility to set a Session (and/or) Idle Timeout and a Wall Garden.

Besides the Captive Portal, there’s the expected Splash Page, where you can change the appearance of your splash page and there’s also the Schedule (with a Quick Template for quick managing). Next to the SSID, there’s are the Radio Settings (allows you to change the Channel, the Min Bitrate, to disable the 11ax on the 2.4Ghz band, to enable the Mesh and more), there’s is also the option to update the firmware (or set a schedule for it), adjust the Alert Settings and more.


The mobile application is a bit more limited and it will work better as a quick means to adjust some settings when you don’t have access to the full Cloud platform. You do get a Dashboard with all the connected APs, Switches, EnSky devices and some info about the Network, as well as the means to manage every connected access point individually; you can also view each Client’s Details (including a Timeline). 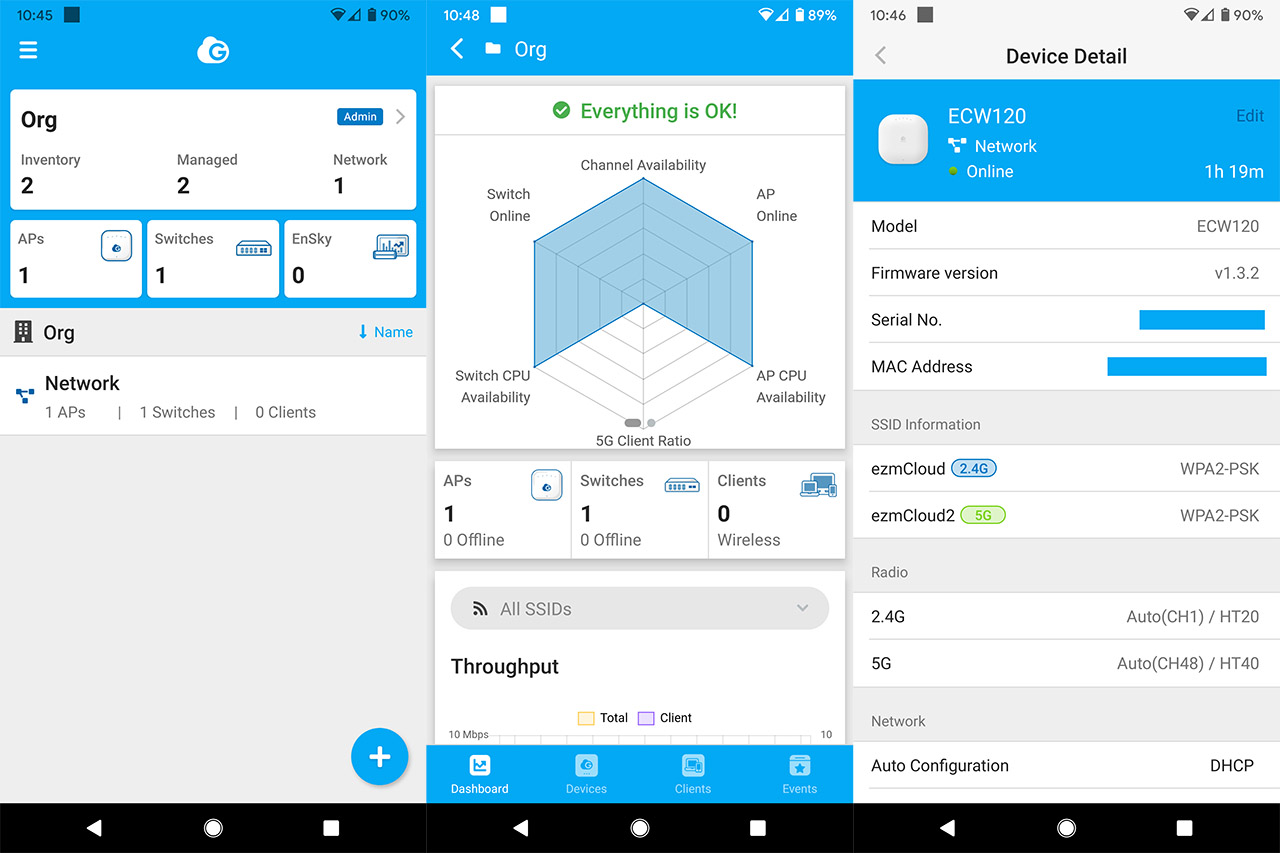 Features and Wireless Test
I remember the early days of the small Open Mesh nodes that would allow the creation of an outdoor mesh network and, while it wasn’t the best implementation (due to the single radio and the backhaul traffic handling), the system did work and could allow isolated communities to get access to the Internet. A few years to the present days and we get the mesh technology with almost all newly released access points, as well as on the consumer WiFi systems and while I noticed that there is no special focus on the mesh capabilities of the EnGenius ECW120 access point, it’s there and working as intended.

So, if you have more than one Cloud-based EnGenius wireless access point, you can opt to enable this feature which will inter-connect multiple APs, allowing the creation of optimized paths for the data (to keep the interference to the minimum and to avoid any possible congestion), as well as ensuring that even if an AP (mesh node) will go offline, the data will be re-routed through the closest and most suitable node available (adding more APs will result in the creation of more optimized paths). 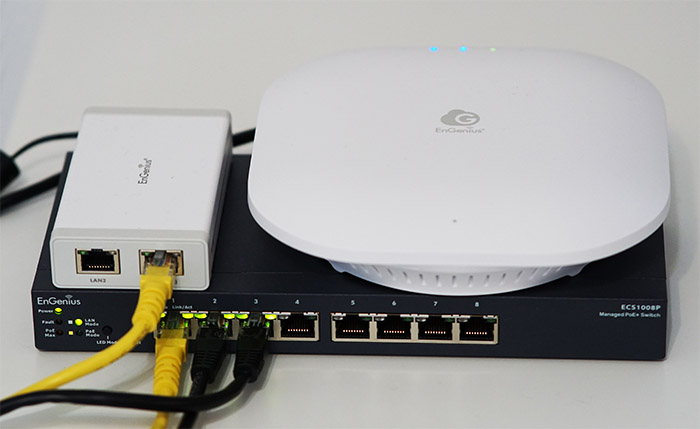 Of course, I would go against the idea of a multi-hop section since the backhaul traffic can severely cripple the entire network (by eating up all the available bandwidth). The EnGenius ECW120 prides itself as being part of the second wave 802.11ac (even though there are already 802.11ax devices out there), so you also get the 2×2 MU-MIMO technology support which means that more than one client can be served at the same time, with the condition that the client devices have compatible WiFi adapters (and there aren’t that many out there). Furthermore, the wireless access point makes use of the BeamForming technology which has the role of pointing the signal towards the clients in order to reduce the interference and improve the throughput, instead of blasting the signal everywhere hoping that it will reach your wireless devices (but, once again, the clients need to be compatible, otherwise this technology is pretty much useless).


To test the wireless performance of the EnGenius ECW120, I had to connect it to an Ethernet switch (I used the managed ECS1008P) since there is no second Ethernet port and, I connected the PoE switch to the router in order to both connect the access point to the Internet and to power it on. Afterwards, I took a computer and I connected it to the Ethernet switch and then I used a second computer as the wireless client (it is equipped with an ASUS PCE-AC88, so there shouldn’t be any problem for the access point to fully show its potential). 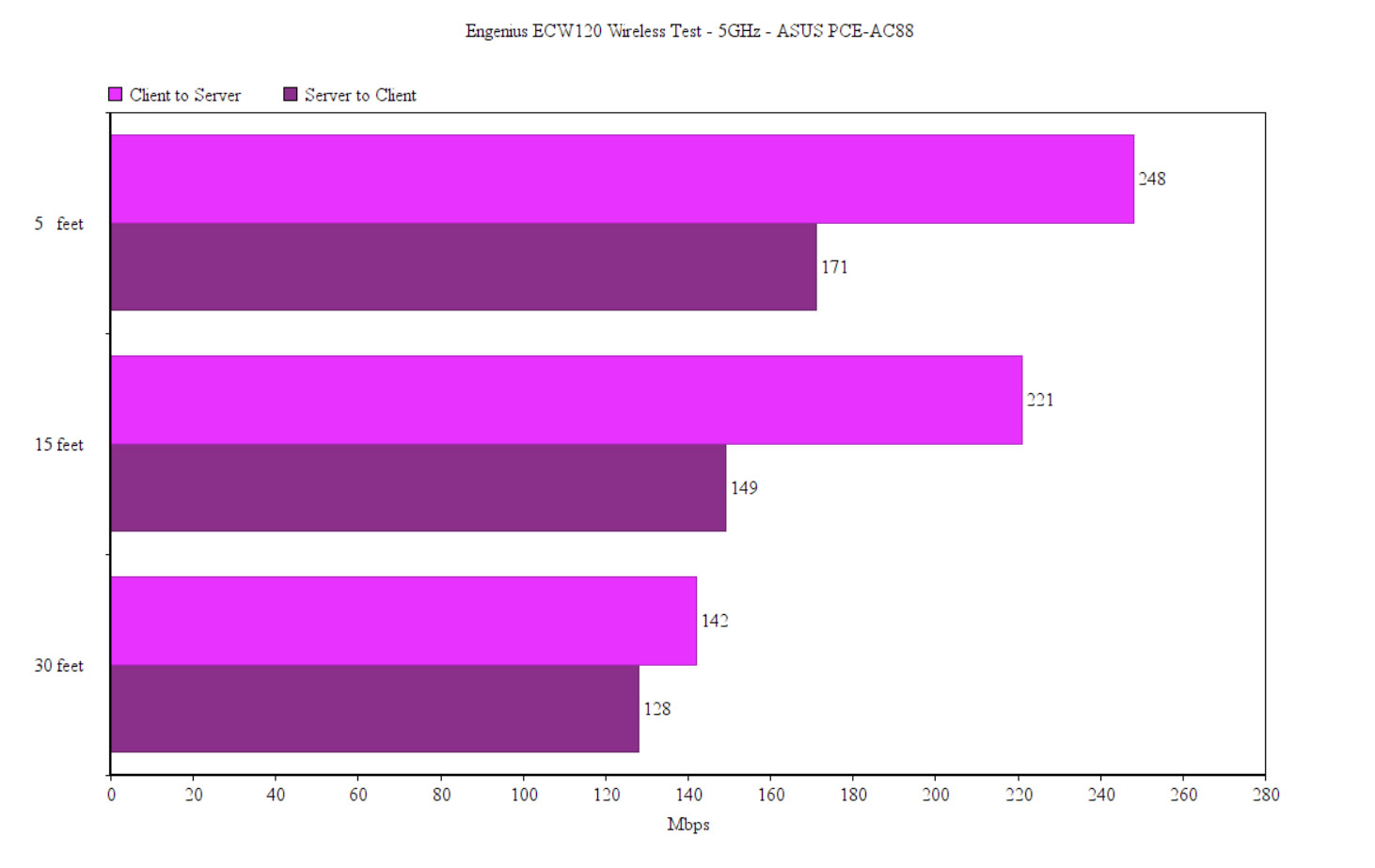 To start the test, I created two SSIDs, one with the 5GHz band enabled and the second with the 2.4GHz band enabled and then, I connected the wireless client to the former. This way, from the client to the server, 5 feet away from the access point, I managed to measure an average of 248 Mbps, while at 15 feet, I got an average of 221 Mbps and at 30 feet, I measured around 142 Mbps. From the server to the client, I measured an average of 171 Mbps at 5 feet and, at 15 feet, I got around 149 Mbps; at 30 feet, the speed decreased to 128 Mbps. 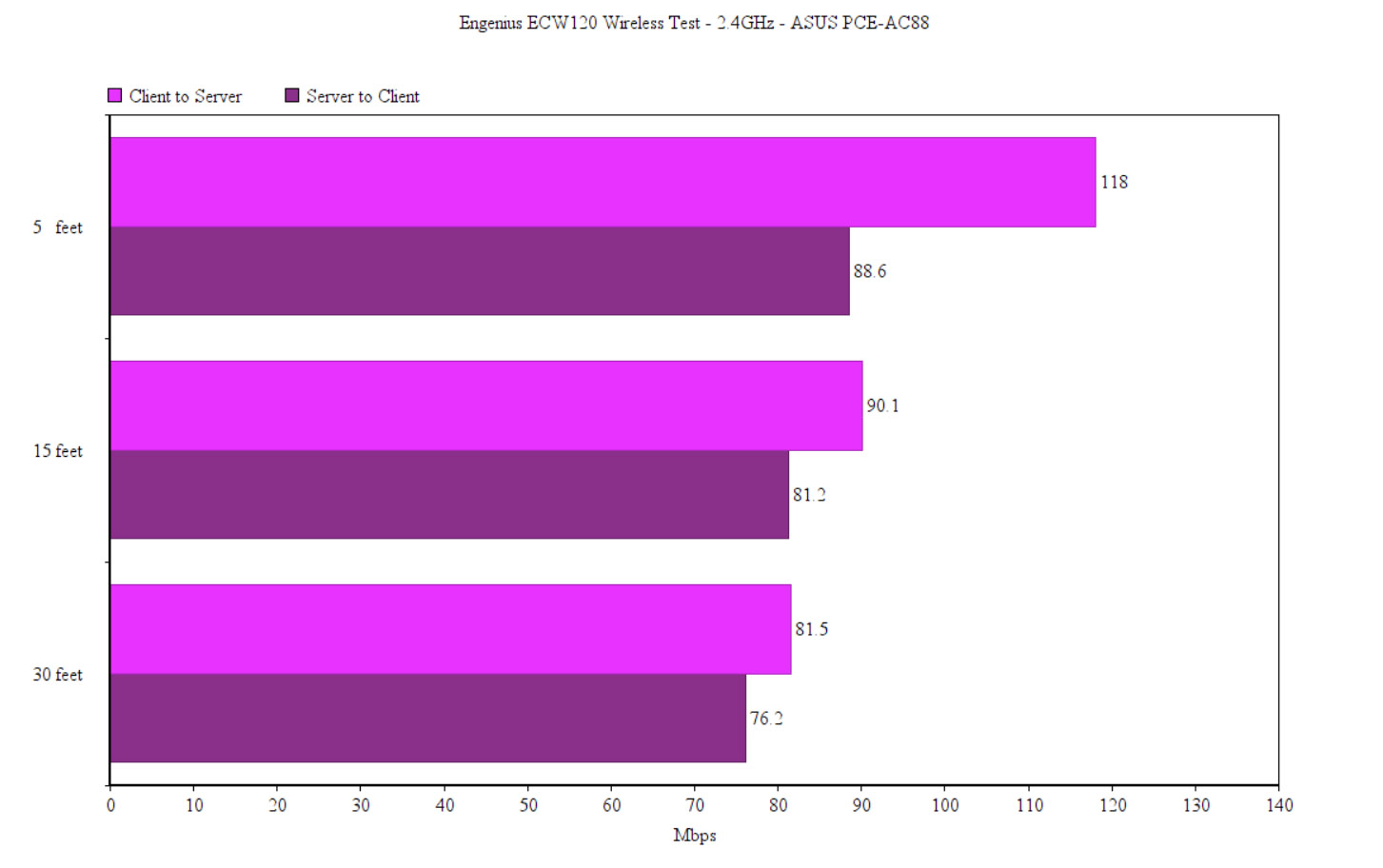 Conclusion
Ubiquiti’s days at the top seem to be numbered considering that so many manufacturers have started pushing their own Cloud solutions, offering a similar (although still a bit inferior) set of features either for free or for a way smaller rate than Ubiquiti’s UniFi. The subscription-free EnGenius Cloud platform is well done and I do expect it to grow even more over the next few years (some paid plans will most definitely appear as well, but since competition is fierce in this market, the number of free features should also remain high enough) and, after testing he SkyKey, the ECS1008P Ethernet switch and the latest ECW120 wireless access point, the integration with the Cloud seems to be properly done, making it easy to create and administer larger networks.

That being said, the EnGenius ECW120 doesn’t offer the highest throughput, nor does it have more than one Ethernet ports, but its performance is very consistent (offering a good WiFi coverage) and, if you’re not bothered by the limited local management software, then it’s a decent entry-level wireless access point to test the capabilities of the Cloud management platform (it’s the only member of the series that is not a WiFi 6 AP). 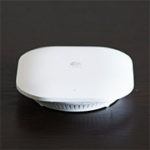