The Freedom VPN router was built to achieve a reliable VPN connection using the minimum amount of steps possible, cutting out the need to set up anything in your current router (no need for configuring a VPN client or any additional apps), so as the developers like to say, even your grandma can use it.

Well, I highly doubt any grandma would even know what a VPN is, but the software seems to be simple enough for anyone with the minimum technical know-how to quickly navigate the web under a new identity. And we seem to be needing VPNs a lot more often nowadays even in the US or Europe – after GDPR came in effect, lots of websites blocked EU visitors and don’t get me started with the streaming sites (Google is also incredibly frustrating when you travel to another country). 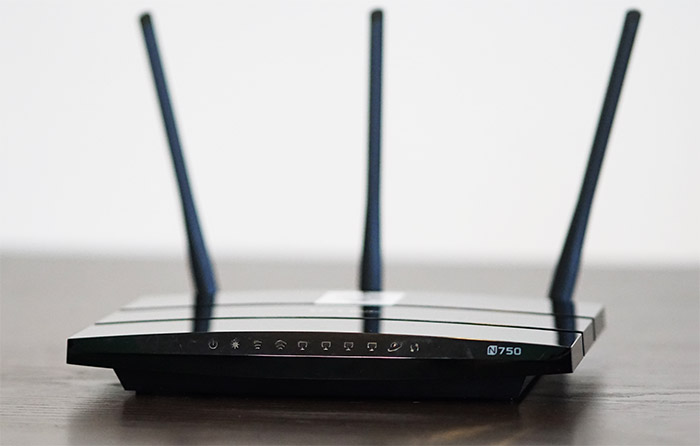 And that’s where the Freedom VPN router comes into play to open up all those closed doors. At the same time, even if the software is the core of the Freedom VPN router, the hardware is equally important, so is the N750 TP-Link enough for today’s exigence? We’re in the age of WiFi 6 (and 6E), so an N750 router is barely relevant nowadays, but you don’t have to worry about your online gaming sessions or that 4K recipe video streaming (for grandma) since the Freedom VPN router is already set to work as an access point, thus creating a separate network from your main one (which can be used for the heavy lifting).

That being said, the convenience of Freedom VPN router definitely seems appealing, so let’s put it to the test and see whether it rises up to the expectations. It’s worth noting that you always have the option to set up a VPN on your current router, although there are a few steps that you need to take before everything works as intended.

The Freedom VPN software will work with some TP-Link or Linksys models and the router that I got is the TP-Link TL-WDR4300 (seems to be the only available on the website right now) which, at a first glance, doesn’t seem altered hardware-wise. You still get that rectangular case that’s divided in three sections which are covered by a glossy black finish (and yes, next to the TP-Link logo, there’s the Freedom Routers sticker). On the rear end, there are three antennas which are removable, thus upgradeable, something that you find less often even on more expensive routers nowadays and on the front side, TP-Link has carved into the plastic the shape of the icons for the status LEDs.

I actually got nostalgic seeing all those large LEDs that so clearly show the status of the router – today, you usually either get a hidden array of LEDs or a single LED that lights up like a disco ball (and nobody knows what those colors mean). The LEDs have their function left intact, so you get the Power LED, followed by the System LED (you don’t see these anymore – if it’s off, then, there’s a system error, otherwise, the LED should blink to show that everything is working properly), the two WiFi networks LED (2.4GHz and 5GHz), the LAN LEDs (one for each port), the Internet LED (for the WAN port) and the WPS LED. Turn the router around and you will be able to see all the ports and buttons. From the left, there’s the Power port (you get a power adapter in the box), an On/Off button, a Wireless On/Off switch, two USB 2.0 ports, each with its own LED, a Gigabit WAN port and four Gigabit LAN ports.

The first USB port has a dongle permanently attached to it which, obviously, contains the software that’s running on the TL-WDR4300 – I say permanently because the dongle is glued in place, so you get no chance of removing it by usual means.

Since the TP-Link router doesn’t run the default software, is there a difference in the heat management? Not really since pretty much all functions are active, so expect the case to get a bit warmer, especially at the bottom, but so far, it didn’t get hot to the touch or overheat (there was no throttling or anything of the sorts either). 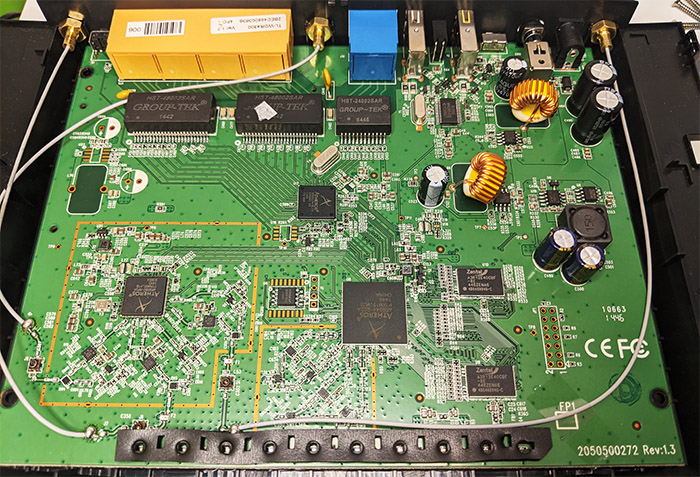 Furthermore, the router relies on an Atheros AR9580-AR1A 802.11b/g/n 2×2:2 chip for the 2.4GHz band and Atheros AR9580 802.11a/n 3×3:3 for the 5GHz band. While looking at the PCB, I saw that it’s possible to forcibly remove the metallic dongle and, perhaps access its content from a different machine, but overall, the developers didn’t seem to have made any changes to the TP-Link TL-WDR4300 internal hardware.

The point of this device is to make it incredibly simple to change your online identity, so I expect the Freedom VPN router to truly be plug and play. And it is considering that all you have to do is to take the device out of its box, connect it to a power source and then use the provided Ethernet cable to attach it to one of the LAN ports of your main router and then to the WAN port of the VPN router. Then, either connect to the Freedom VPN router by wire or to one of the two available WiFi networks which are preconfigured and the security key can be found on a guide inside the package. And that’s it for both the hardware and software installation, so it’s essentially a pre-configured access point which means that it can’t be connected directly to your modem – the user interface doesn’t allow you to set up an Internet connection. This also means that you get to keep your ‘default’ router which can be WiFi 5 or WiFi 6 and all the connected clients are unaffected by the VPN router. And, when you wish to visit websites that are blocked in your country or unlock more content (that’s limited locally), simply connect to the Freedom VPN router and you’re good to go. 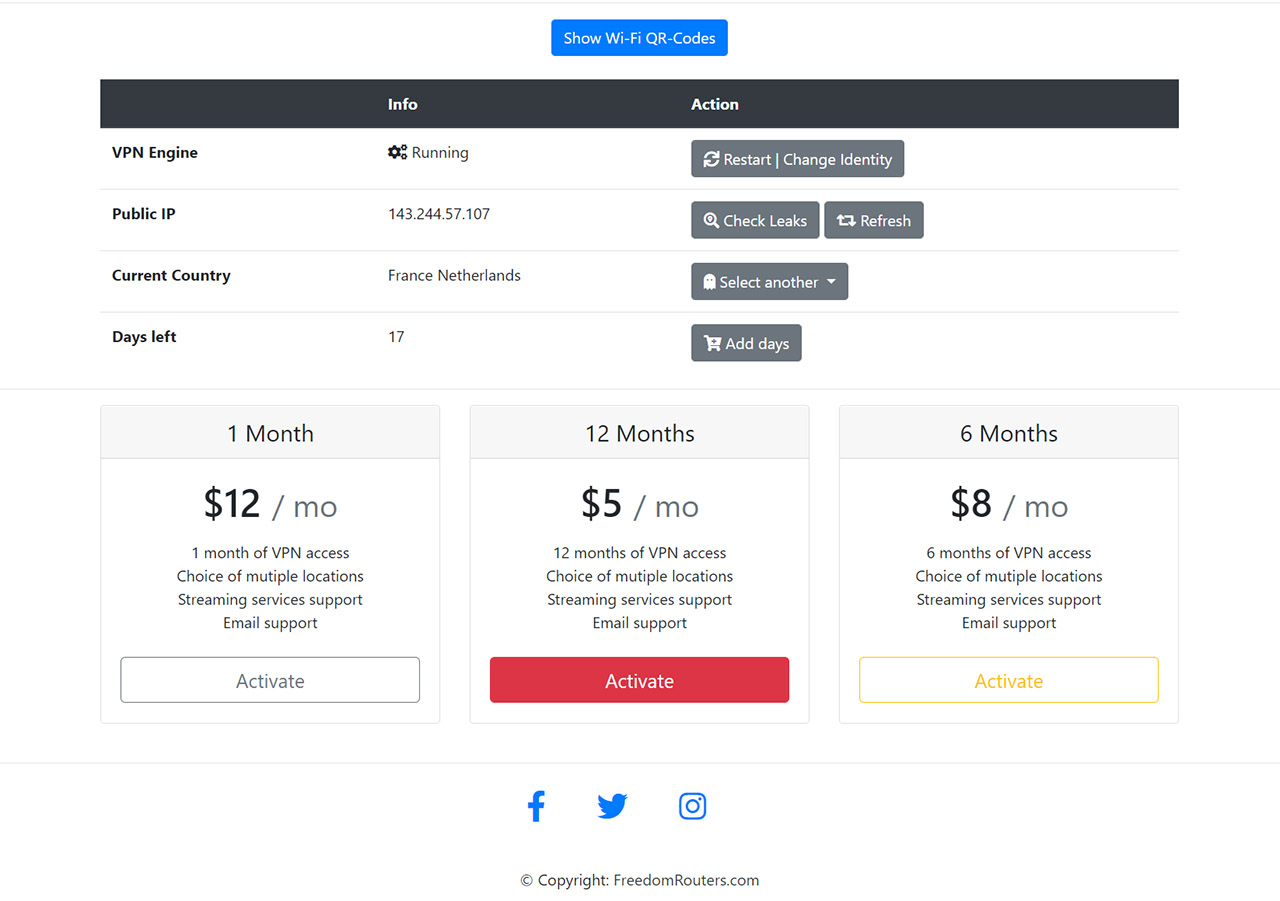 In order to access the user interface, you need to open a browser and then write http://fr-router in the URL. Press enter and you should be greeted by the minimalist GUI. Be aware that in case the VPN router does not have an Internet connection, even if it is connected to your main router, it will not properly load the style of the page (it seems to have some external dependencies in this regard). If there is an active Internet connection, you will be greeted by the Router Control Panel which will allow you to quickly connect your mobile devices to the WiFi networks by scanning the QR codes, but I was unable to find a way to change the SSIDs or the passkey. The security key code that you get in the guide is the only one that you can use and, while some people will appreciate the fact that everything is already made for them, this rigidity can become a security issue. To be more specific, in case a third party gets a hold off your passkey, you are unable to change it (unless you contact support, I suppose). Another possible problem is that any computer that’s connected via cable can access the user interface since it doesn’t require an admin password. 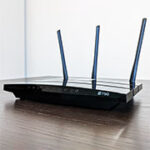