The GameSir T4 Pro is a multi-platform gaming controller designed to work with pretty much all available consoles (including the Nintendo Switch), as well as with your PC (both Microsoft and Apple OS) and even with your smartphone. The first two categories have been well served over the years by the tech manufacturers, while the smartphone has been generally neglected due to the mobile games not getting past the casual status (the ads and the micro-transactions didn’t really help either), but since last year, things took an interesting turn when Google, nVidia and Microsoft revealed their Cloud gaming streaming platforms. This meant that your smartphone (and your TV, for that matter) should allow you to play PC-suitable games.

That’s clearly a game changer for the entire gaming industry and, as a consequence, the third-party mobile-compatible controllers are currently being pushed into the mainstream (well, you don’t want to play Witcher 3 using the touch-sensitive display – you can, but you shouldn’t). So, the GameSir T4 Pro comes at the right time to cover this growing niche, allowing you to easily attach your mobile device (using a dedicated clamp) and connect it via Bluetooth. 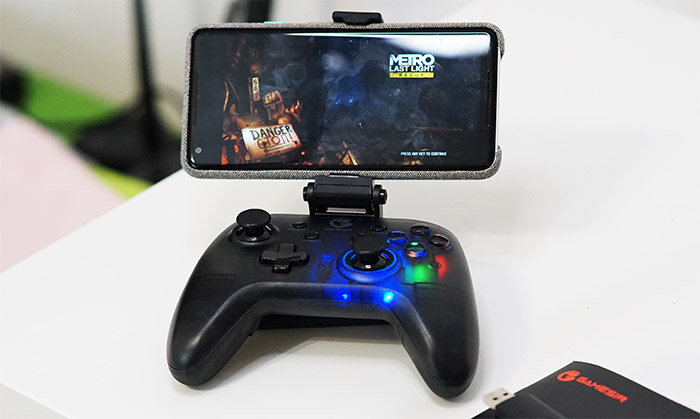 Of course, you’re also free to try it out with any gaming platform you like. Make no mistake, it’s close to impossible to create the perfect multi-platform controller that can accommodate the large variety play styles, but, since GameSir is keen on getting as close as possible, let’s put the T4 Pro to the test and see whether it should be on your next purchase list.

As its name suggests, the GameSir T4 Pro is an improved version of the base T4 model, but, these improvements are made on the inside the controller (new chip), so it shares the same design with its predecessor. Indeed, the controller has that characteristic semi-transparent black plastic completely covering the case – the plastic gains a grippier texture where the device sits in the palm of your hands, while the rest remains soft to the touch. The buttons and joysticks are all in the same position, so, if you’re coming from the previous generation, it shouldn’t feel any different. I also have to mention the similarity with the Microsoft’s Xbox Elite Wireless Controller Series 2 and that’s a good thing since it’s considered one of the best controllers on the market due to its shape and functionality. This means that even if you have smaller (or larger) hands, the gaming controller should feel comfortable even during longer gaming sessions. 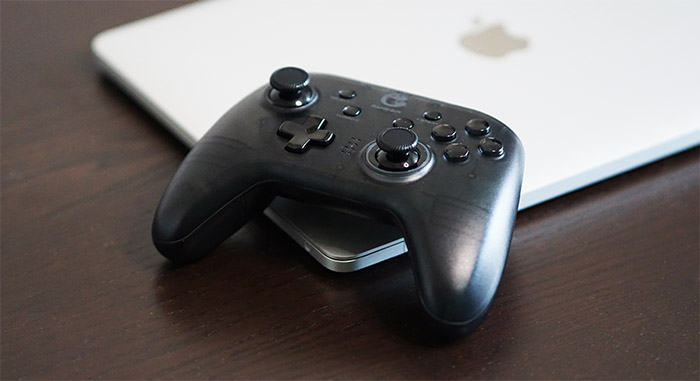 At the same time, the GameSir T4 Pro weighs approximately 7.1 ounces, while the Xbox Elite 2 weighs 12.1 ounces, so the controller is significantly more lightweight and I know that heavy and premium usually come up in the same sentence, but the T4 Pro still feels solid and well-built. At the top, the device follows the layout of the Microsoft controller, with only a few differences. So, from the left, there’s the first joystick, while the second joystick sits on the bottom right side; there’s also a D-Pad next to the left joystick, as well as the Select and Turbo buttons (the Turbo button can be set to trigger a fast sequence of separate button presses, including repeated actions). On the right side, next to the second joystick, there’s the Home and Start buttons, as well as the ABXY buttons (on the top right corner). Both joysticks have rubber at the top surrounded by textured plastic for improving the grip and they were also well calibrated since while gaming, neither felt very stiff (the joysticks usually loosen up over time even more) – the other buttons are coated by an oleophobic glossy finish.

On the rear side, GameSir has added the LT and RT buttons, while in the middle, there is a USB type-C port (for recharging the controller) with two canals, one on the left and one on the right for attaching the phone holder. Of course, you get the holder inside the package and it’s quite easy to attach – simply slide it into the dedicated canals. The clamp has a very wide opening (from 2.1 to 4.1 inches), allowing you to insert any type of smartphone from the market; my only complaint would be that instead of being spring-operated, the clamp seems to rely on rubber bands. GameSir has also added four buttons on the bottom of the controller (M1, M3 on the right and M2, M4 on the left) which are quite responsive and very easy to access with your middle fingers. I also have to mention that the A, B, X, Y, the LB, RBm LT and RT buttons are programmable, so you can change their functions. 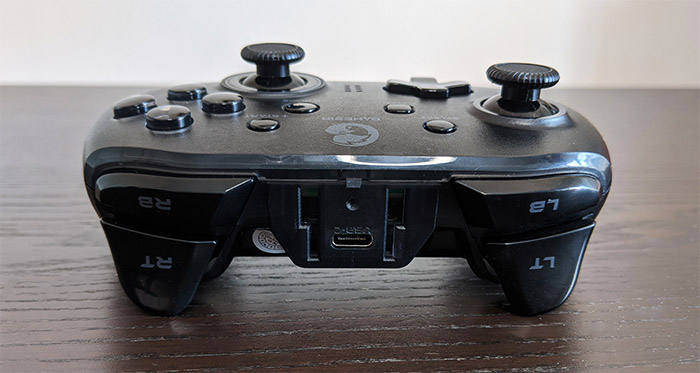 Returning to the top, in order to turn on the gaming controller, you need to press and hold the Home and either the X button, the Y or the A button (depending on the type of connection you want to use) until the internal LEDs will light up and shine through the semi-transparent plastic. It’s a very cool effect and, while most of it is just for aesthetic purposes, there is a row of LED indicators in the middle which show the connection status. When you connect the controller to a PC using the USB receiver (that you get in the box), the bottom set of LEDs will light up blue, but connecting the T4 Pro using the USB-C cable will enable both the top and the bottom set of LEDs. You can also rely on Bluetooth to pair the controller to a Nintendo Switch or Switch Lite (use Home + A button combo) and in this case, the third row of LEDs will light up blue – the GameSir T4 Pro uses the Bluetooth v4.0. To connect a mobile device using Bluetooth press A + Home in which case the top set of LEDs will light up and lastly, you can connect an Apple computer via Bluetooth (press Select + Home) and the LEDs that will light up are the first and the second set.

Note: The T4 Pro turns off after a few minutes if unused, but what’s annoying is that you need to start it up all over again instead of just pushing a button to wake it.
Note: Considering that mouse dongles are so unobtrusive and small, the 2.4GHz wireless dongle for the T4 Pro seems unnecessarily big.

Feature-wise, the GameSir T4 Pro is pretty much identical to the T4, with the exception of the multi-platform support, of course, so you get the motor vibrations inside the arms of the controller and they work quite well, providing a similar feel to the more expensive gaming controllers out there. There’s also the aforementioned programmable keys and you do get a plethora of buttons which are again, a characteristic usually reserved for the more expensive controllers on the market. I would have liked to create custom profiles for each console using a dedicated software, but, unfortunately, GameSir does not provide one (only a few expensive controllers do have such as dedicated tool). The good news is that the T4 Pro still allows you to set a combo of actions which are then activated using the Turbo button and to do so, you need to press and hold the combo button and then press Turbo. 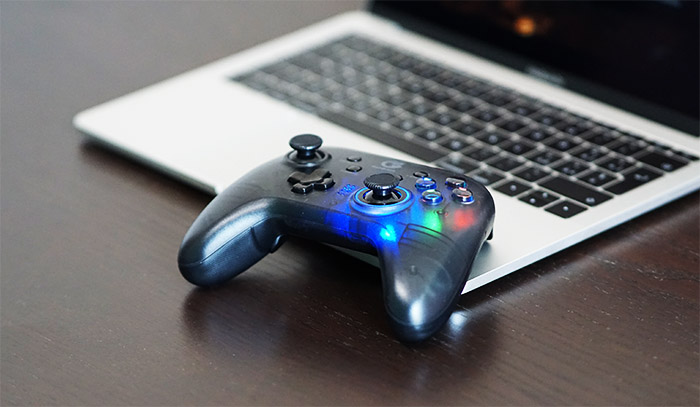 This is great for fast attacks in games, but you can also set multiple actions to be triggered at the same time or you can set them to run in a sequence (you can find a detailed guide on how to achieve it in the user manual). That being said, there are three main factors to keep in mind when testing a controller: whether it’s comfortable, precise and if it has some noticeable latency. I have used the GameSir T4 Pro while playing some PC games and yes, I’m more of a keyboard and mouse kind of guy, but the gaming controller worked really well with certain types of games.

As a minor complaint, I would say that the bottom positioned M1 + M3 and M2 + M4 buttons are too close to each other and not very intuitive to use, but if you use only the M3 and M4, it shouldn’t give you much trouble reaching them. When paired with a mobile phone, the fact that it’s lightweight, it allows for an easier handling. My smartphone was heavier, but it didn’t affect the way the controller felt in hand, even though I wouldn’t have complained if the T4 Pro was a bit heavier. As for precision, the GameSir T4 Pro did well when using any of the present buttons and yes, the shoulder buttons felt a bit flimsy, but the action trigger was on point. The joysticks are usually the trickier part, but the movement registered quickly and without delay. And this takes use to the latency aspect. The GameSir T4 Pro has three means of connecting to your devices, be it wired directly, via Bluetooth or using the 2.4GHz dongle. 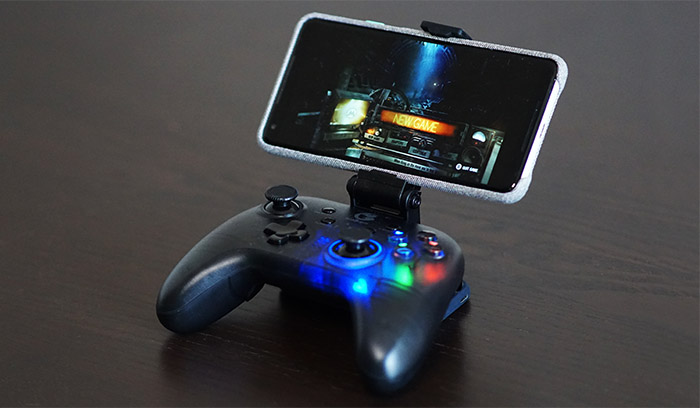 As expected, I saw no lag when the gaming controller was connected to my PC using a USB cable and I saw a similar behavior when using the 2.4GHz dongle – the connection remained solid and the button presses registered quickly. I know that some of you may thing that the Bluetooth v4.0 coverage could cause some latency to creep in, but, I connected the controller to a MacBook Pro using Bluetooth and I could go as far as 30 feet before experiencing some connection problems. I also had the same lag-less experience while the gaming controller was connected to my smartphone and was running some Stadia games.
Note: Inside the controller, GameSir has added a 600mAh rechargeable battery which should last about 9 to 10 hours and recharging it from 0 to 100% takes approximately two hours.

The GameSir T4 Pro is definitely an ambitious gaming controller, sporting features that are usually found on far more expensive devices, such as the extra buttons, the Turbo button action combinations and most importantly, the support for multiple gaming platforms. Considering that I have recently gotten more into the Cloud gaming (well, only Stadia so far), I usually end up playing the same games on multiple platforms (MacBook, Windows PC and now a smartphone), so, I find using the T4 Pro as the single controller for all my devices and not needing anything more, one of the most elegant tech solutions in the past few years. 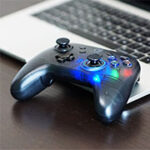