Besides the mesh technology, both the Google WiFi and Eero Home support BeamForming, so, the signal is directed at the connected wireless devices (which support this technology), instead of broadcasting it everywhere and hope it will reach the devices. Furthermore, both systems have also implemented the MU-MIMO technology which has the role of serving multiple devices at the same time, instead of letting the clients compete for the bandwidth. Some new consumer-type networking devices support the MU-MIMO tech, but, similarly to last year, there are still too few devices that have a compatible wireless adapter (the ones that do, are usually just 2×2), so there may still be a while until is becomes widespread (unless something better comes along).

In order to test the wireless performance of either systems, I connected one unit to the modem (it can be any Google WiFi, but, in the case of the Eero Home WiFi you are constrained to use the Eero Second Gen unit, since the Beacons lack any Ethernet port) and I took a compatible wireless client to measure the speed performance at various distances away from the router (the client is equipped with an ASUS PCE-AC88, while the server is connected via cable to the main unit). Afterwards, I added the second and the third unit to the network, the first being positioned about 35 feet away from the main unit, while the second also at 35-40 feet from the main unit, but with a couple of thick walls in between. 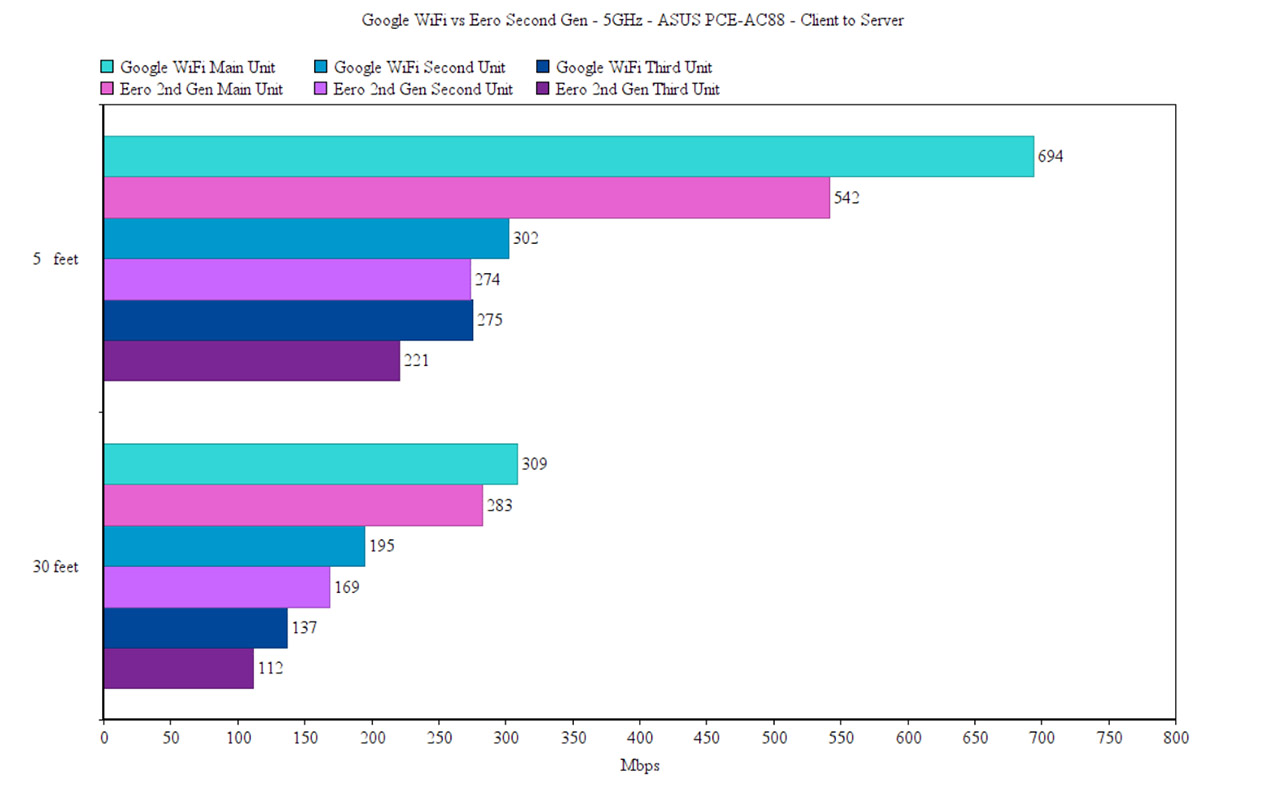 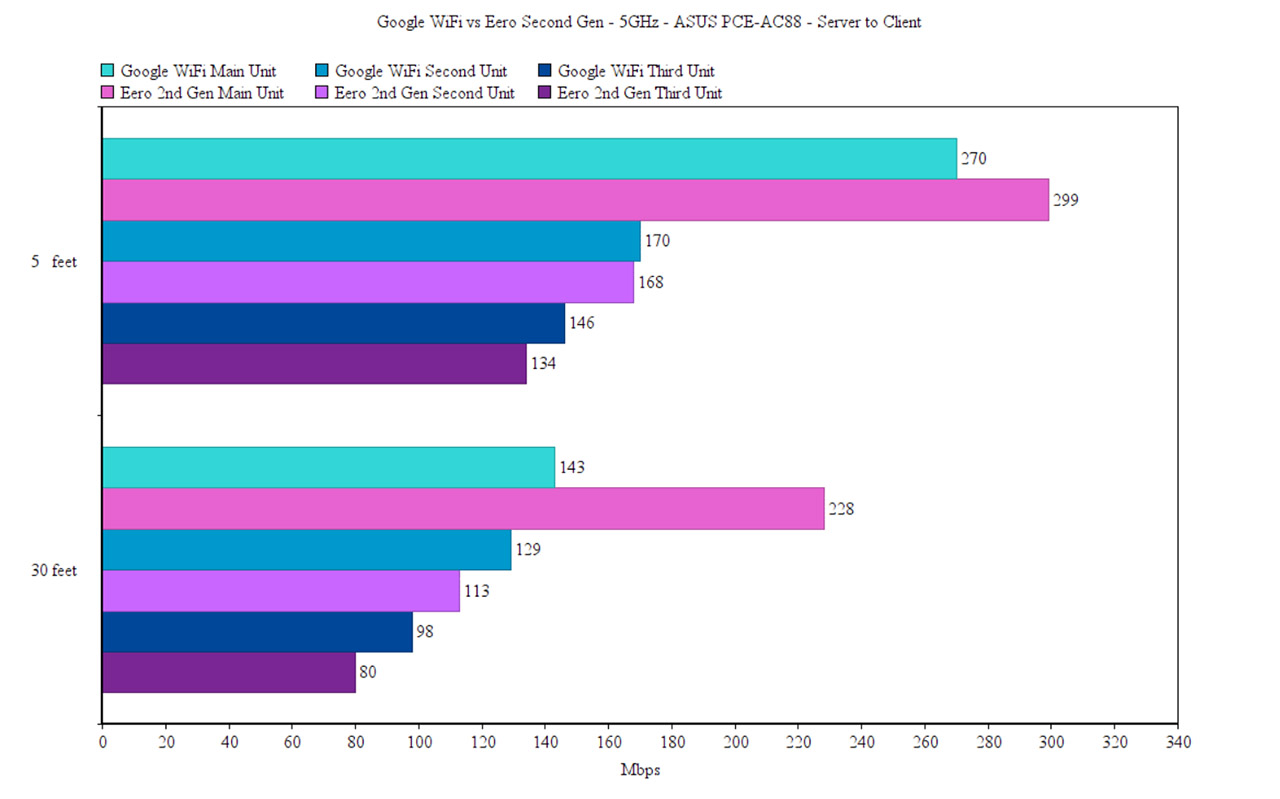 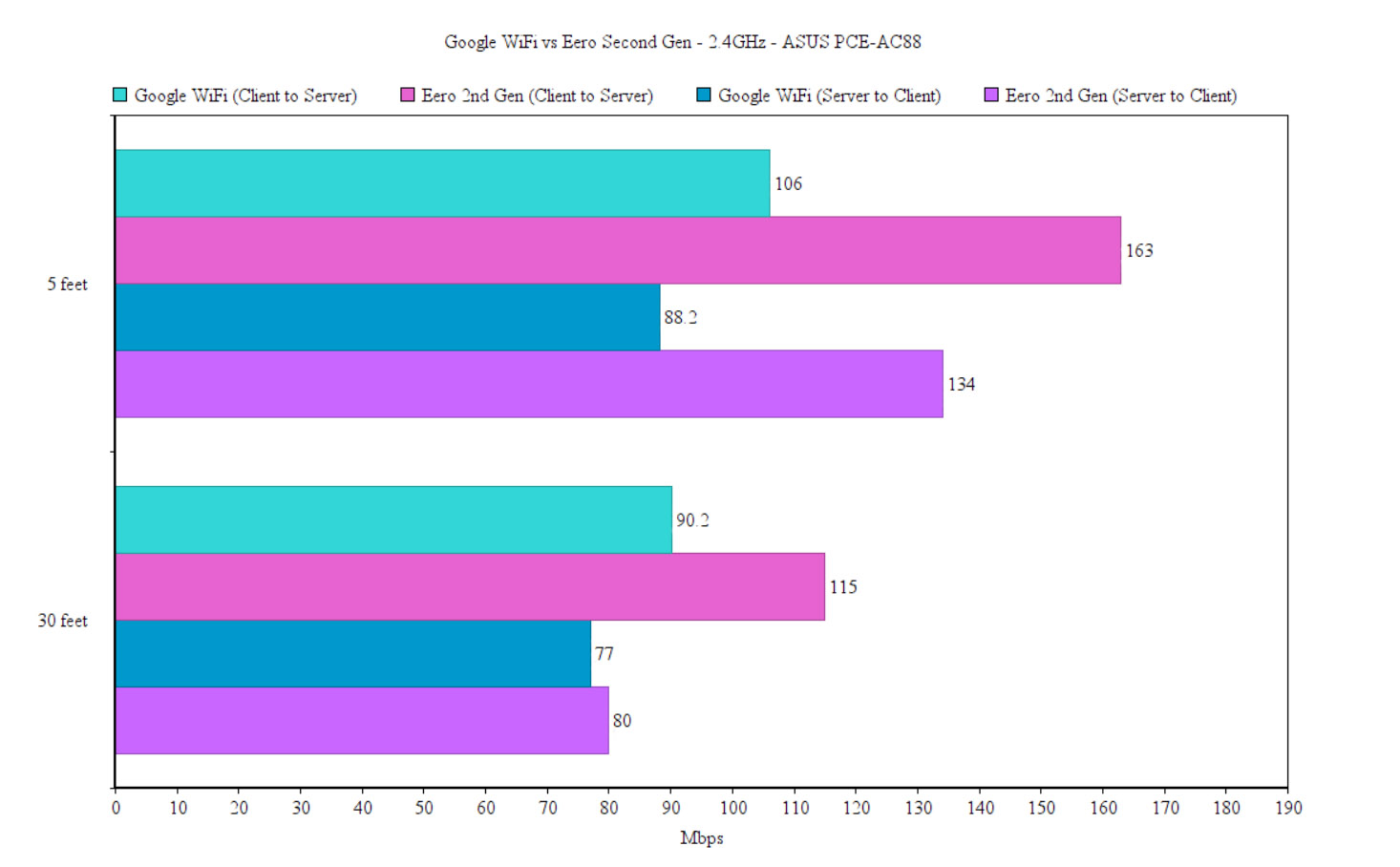 Verdict: It’s clear that Eero didn’t focus towards delivering the highest speed, but the new system (even the Pro pack) managed to give a very consistent wireless performance, therefore managing to cover more space than the first generation and allowing the Beacons to be put at a greater distance, while not experiencing a severe throughput loss. The Google WiFi also has a very consistent speed performance and the Ethernet backhaul can make a difference especially with more wireless clients connected to the network.I know that tri-band approach can give the Eero an edge over the Google WiFi, but the performance of the latter is better, so it wins this round.

The setup process for either the Google WiFi or Eero is done using a mobile app (available for iOS and Android) and it consists of a few very simple steps: first, you have to download and install the app, create a new account and log into the user interface to start the setup wizard (Eero will also ask for your phone number – an odd recurrence form the previous generation). Each app will guide you through preparing the necessary accessories so you can properly connect the devices to the modem and to the network (Google WiFi allows you to connect the units through simply scanning the QR code) and, after it detected the main unit, you can select the location and create the WiFi network (SSID and password). 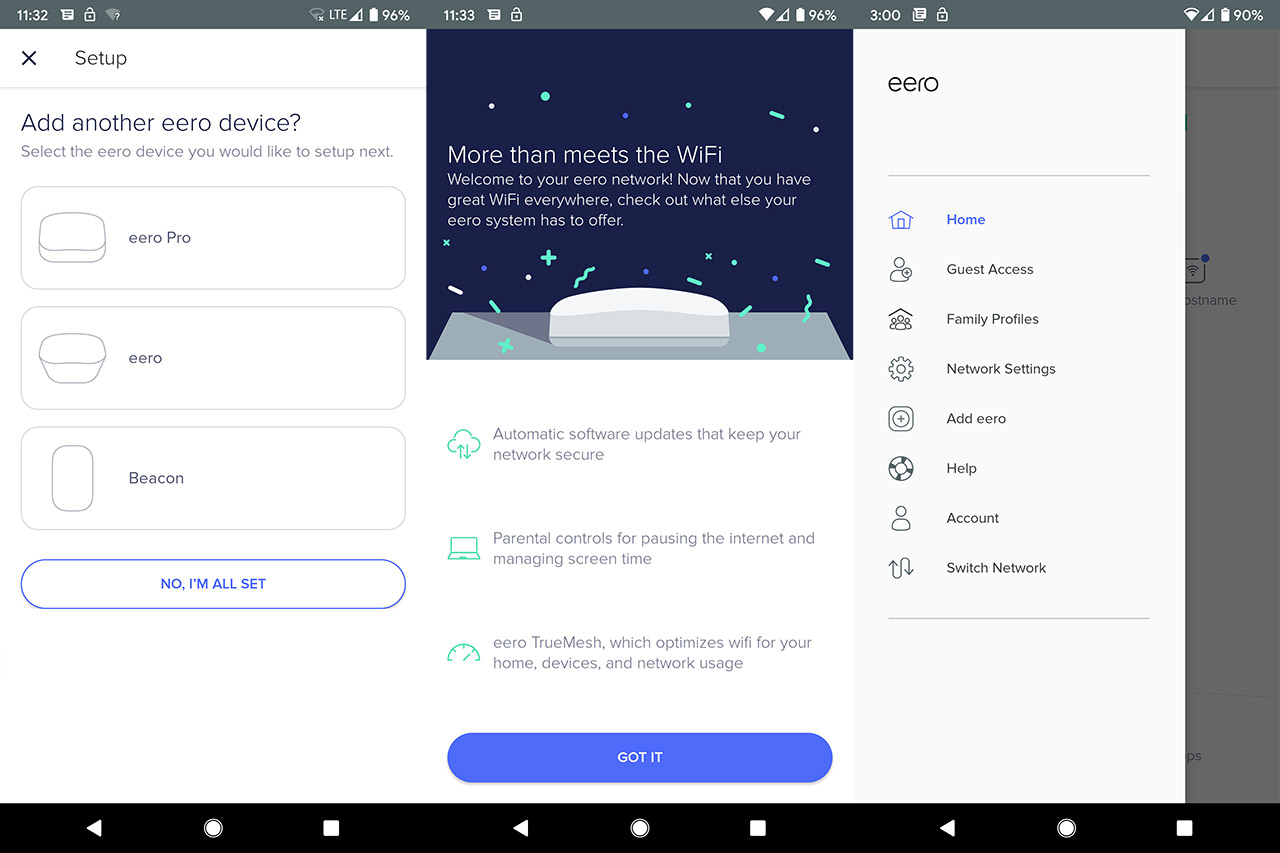 Afterwards, you can add new units to the network and both the Google WiFi and Eero will once again ask you for the location of the new router and it will provide you with the means of testing the connection to see if the location of the device isn’t too far away from the main unit (additionally, Eero will also allow you to configure the NightLight feature on both of its Beacons).

Some of the main features of the Google WiFi are the Guest WiFi, the Priority Device (offers optimization for time-sensitive data streams), the Home Control (useful to connect smart home devices through the IFTTT protocol), the Family WiFi (pauses the WiFi access, creates schedules for the Internet access (a schedule can now be delayed for 30 minutes even if it has already started), groups devices with labels and, recently, it has also implemented SafeSearch Site Blocking, which gives the parents the ability to control the access to over 8 million explicit websites) as well as Port forwarding, IPv6 support (the client IPv6 addresses can be verified in device details), UPnP, DNS and DHCP IP reservations. 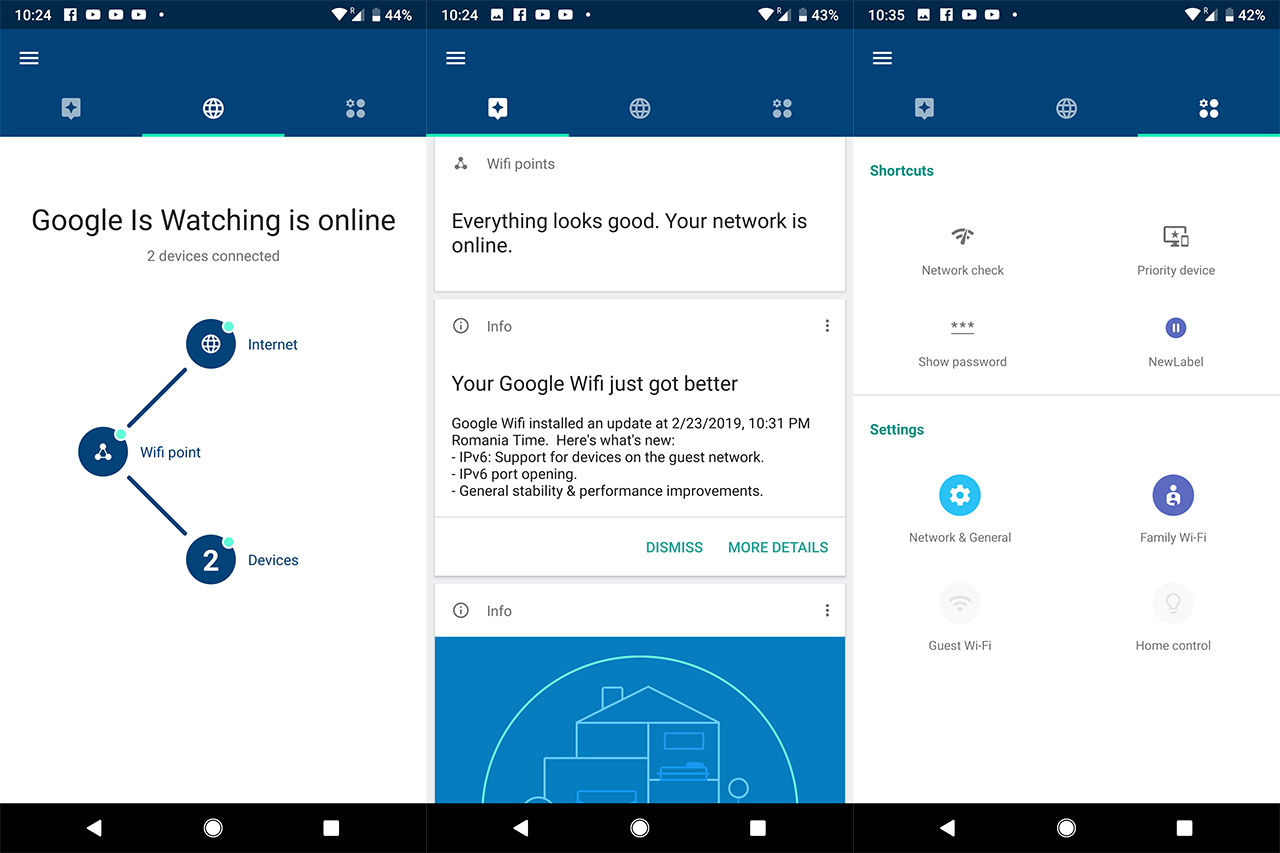 The main features of the Eero Home WiFi System are the Guest Access, Family Profile (just allows its users to pause the Internet connection), Switch Network (change to a different network or add a new one), NAT Reservations, Port Forwarding, IPv6 support, Thread device commissioning support, UPnP and DNS. Eero has some more features available for its users if they purchase the Eero Plus monthly subscription, which adds Content Filtering and SafeSearch to the interface (improved Parental Controls) and it also provides a better protection for the entire system: anti-malware, anti-phishing, antivirus and anti-ransomware.

It seems that many WiFi mesh system manufacturers have added a few limitations and some even stripped away important features for the sake of simplicity and, while everybody values a simple-to-use and intuitive user interface, there are some users that may like to configure every aspect of their network and I’m not sure the simple app from either Google WiFi or Eero can satisfy the tech-savvy users. For example, Netgear Orbi and Linksys Velop have given access to a web-based interface and offer a better range of features (rivaling other high-end routers from the market). 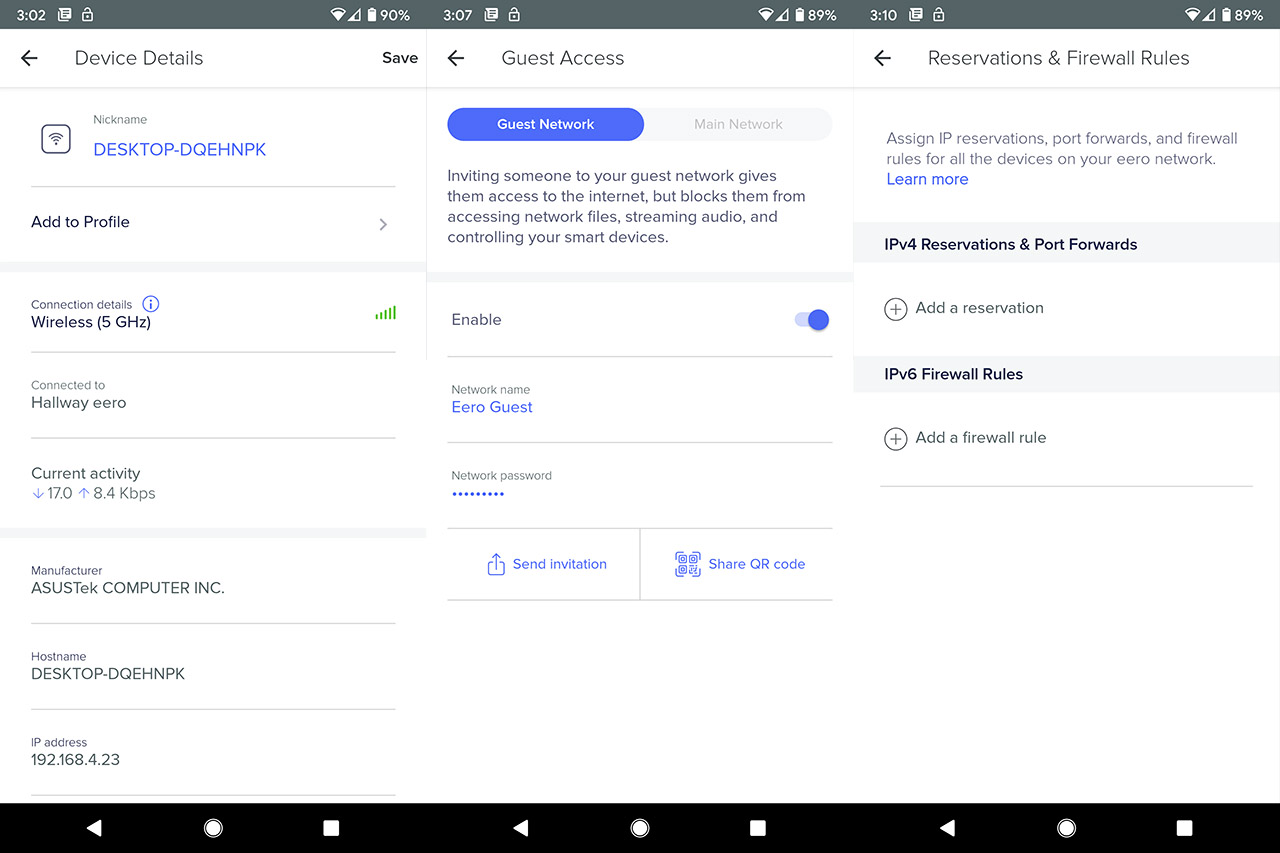 Verdict: Both can be installed, configured and monitored using a mobile app and neither has a web-based interface available. In terms of features, I noticed that both systems offer pretty much the same package, but if I take the Eero Plus out of the equation, the Google WiFi is better equipped, so it wins this round.

Conclusion
Both Eero and Google have pretty much put the mesh WiFi systems on the map (each in its own way), which has proven to be a godsend for people that struggled with covering a larger area using a single expensive router. The Eero 2nd gen system definitely has a place in the domestic networking market and it came at the right moment to have enough time to mature until the next big thing will force every manufacturer to adapt its devices (so customers will have a better performing network – and yes, I’m talking about WiFi 6). At the same time, Google WiFi has been a long time favorite because of its elegant design, its simple and intuitive configuration process and its stable wireless performance, so even a year after its release it can still hold its ground against the Eero Home WiFi 2nd Generation system. There’s no denying that the tri-band unit from Eero makes a difference into the overall wireless performance and it would have been even better if the Beacon units weren’t lacking an Ethernet port.

But, even if we’re not talking about the Pro pack (which is more expensive), is the price still justified in the case of the Eero Home System? Right now, I’m not really sure that it is, since there are WiFi systems that have a similar wireless performance and carry a more budget-friendly price tag (the Google WiFi actually being the best example in this case). So, as a conclusion, I would definitely recommend the Google WiFi to anyone having a small to medium home with lots of WiFi dead spaces (and wanting a budget friendly solution), while I would go for the tri-band Eero if I have a medium to larger home and if I already have an existing Eero system from the previous generation and I want to cover an even larger area or take advantage of the additional radio band.