The Noerden LIZ is a relatively new smart water bottle that hit the market about half a year ago and unlike its, perhaps, more established competitors, the focus wasn’t towards a mobile app and the actual water intake tracking, but on the implementation of an UV-sterilization process, while the hydration reminders are a bit more basic (an LED flashing every two hours). This means that The Noerden Liz strays a bit far from the concept pushed by the Hidrate Spark or Thermos which support a full integration with a mobile app, actively measuring the water intake, but the truth is that the smart water bottle market has been in a very strange place for a while now, with a single manufacturer that has released more than one generation of devices, so a new player is always welcomed.

I still have a hard time calling the Noerden LIZ a proper smart water bottle and, probably the most correct term would have been enhanced water bottle, but Icewater also calls its Bluetooth speaker water bottle smart due to a single LED that pulsates once an hour, so what do I know. What Noerden calls smart is the aforementioned UV sterilization technology, the hydration reminders and the temperature indicators, so, without further ado, let’s have a closer look and see how does the Liz bottle stand when put next to its main competitors. 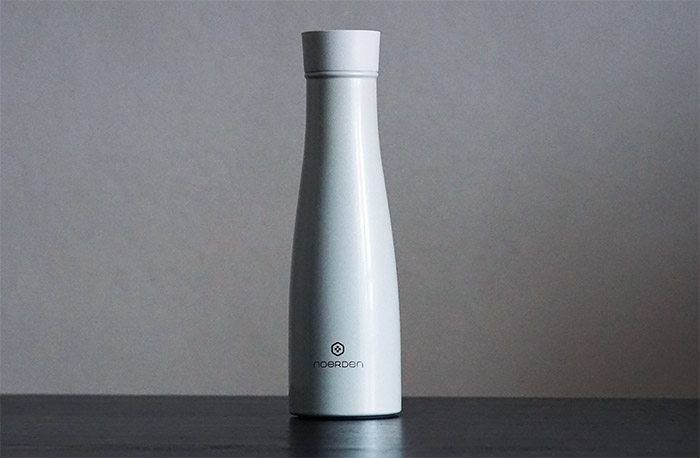 The main problem of the smart water bottle department (or enhanced bottles – I should trademark the name) is that it’s still too young and doesn’t have a larger, more seasoned manufacturer to create a blueprint for all to follow and we’re left with lots of start-ups which more often than not have a terrible app, that is, when not being busy copying each other, so, after I took the Liz bottle out of the package, I was happy to see that the design was, let’s say, relatively unique since it still closely resembles an insulated bottle (as it should). The bottle itself is slim and tall, measuring 9.8 x 2.9 inches, while the volume capacity is 16oz and Noerden decided to use 304 stainless steel on the outside of the device, while on the inside, the bottle is made out of 316 stainless steel.

This is the larger version of the LIZ bottle, but there is a smaller, possibly more travel-friendly variant that has a volume capacity of 12oz and measures 7.6 x 2.9 inches. The exterior of the water bottle is covered by a white glossy finish (other colors are available, such as red and black – the smaller variant also comes in blue and pink), but it doesn’t feel slippery, although there is a bit of weight to it (0.7lb for the larger version and 0.6lb for the smaller one). 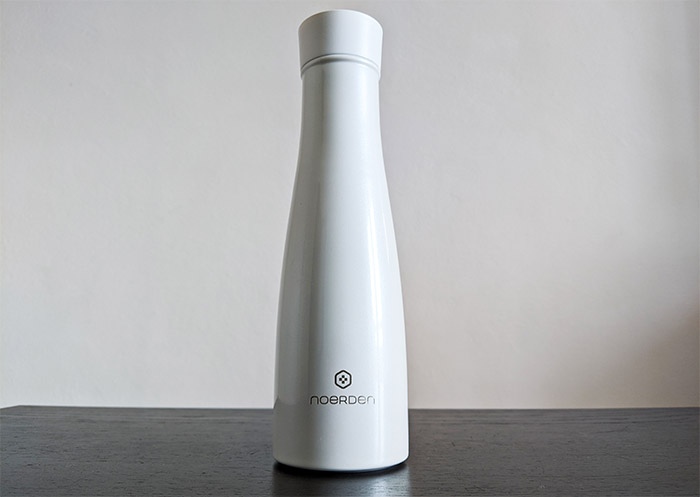 The lid is also similar to that on the insulated bottles, so it’s a bit thicker and the material of choice was food-grade BPA-free plastic. As with most other smart water bottles, the lid is the center-piece of the entire device and it’s where you’ll going to find all the electronic parts.

The most evident one is the recessed section with the two exposed connectors which are magnetic to allow you to easily attach the small piece of plastic (that you can find in the package). This is an interesting concept considering that one of the most common points of failure on the smart water bottles is around the port and a proprietary magnetic piece to which you can connect any microUSB cable could promise an increased longevity for the device. That is, unless the magnetic piece fails and you can’t find replacements – it’s also incredibly easy to lose. 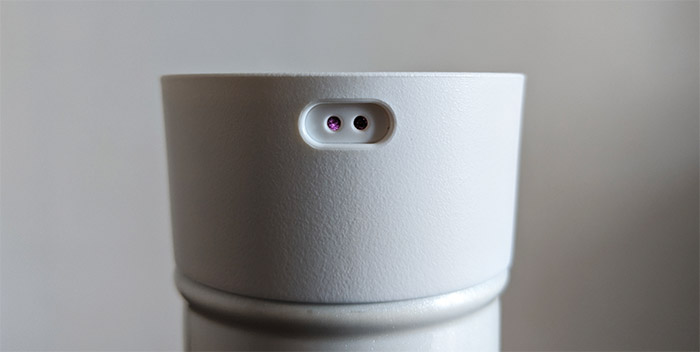 The lid can be removed with a counter-clockwise rotation and after doing so, you’ll be able to see both the UV emitter and the temperature sensor pointing downwards; unlike other smart water bottles, there is no probe going to the bottom of the bottle to measure the quantity of remaining water.

Instead, the only available functions available are linked to the two aforementioned sensor and emitter. This way, you can use the Noerden Liz as a proper insulated bottle (it can keep your beverages cold or hot for more than 12 hours) and, to check the temperature of the liquid, all you have to do is to tap the top of the lid once and the LED underneath it will become blue when the temperature is below 98 degrees F, yellow when the temperature ranges between 98 and 140 degrees F and red when the drink temperature is above 140 degrees F. I did notice that after I poured some relatively hot water, the LED still said blue (which was incorrect), but, after I put the bottle upside down once (so the water touches the sensor), the LED immediately became yellow (which was correct). 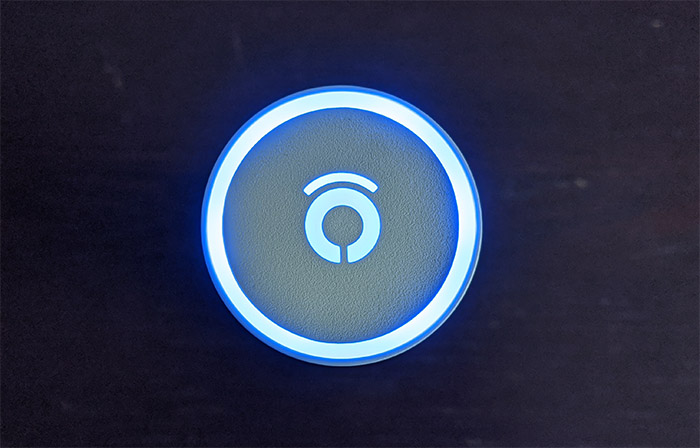 The top of the lid is touch-sensitive and it’s pretty much the only way to interact with the bottle (there is no app): to turn it on, tap and hold on the lid for about 2 seconds until the LED flashes white once and, to turn it off press and hold it again for 2 seconds – the LED will also flash every two hours to let you know that you need to drink water. The UV sterilization process can be started by tapping the top of the lid twice: at this point, the LED will slowly flash white until the process is done – you can stop the process by tapping twice on the lid; also, if you decide to suddenly open the bottle while the sterilization process is running, the UV emitter should automatically turn off (in case of malfunction, it can remain active, so it’s important to not point it at your eyes or skin and to try and turn it off from the top lid). 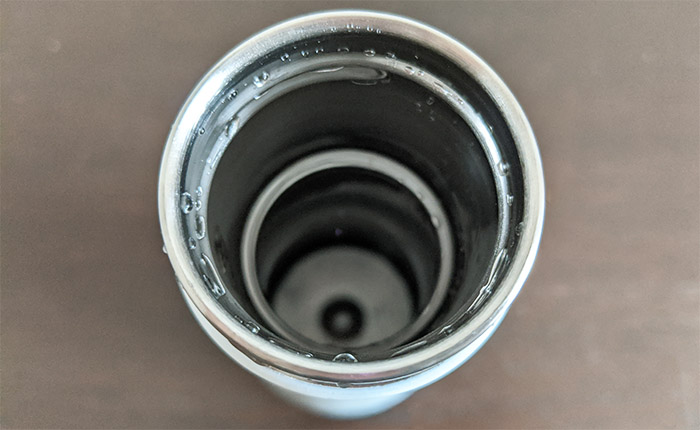 I have seen this concept before with the CrazyCap lid which would fit on some types of bottle and would also try to sterilize the water via UV rays, but does it actually manage to kill 99.9% of harmful viruses and odor-causing bacteria as the manufacturer claims? The UV sterilization has been used for cleaning fish tanks for a while now and if you’re worried about penetration, it has been determined that UV can go as deep as 30 feet into the ocean (or 10 meters) – the purer water is even easier to penetrate, so yes, it should work just fine with 12 or 16 ounces of water. There could be a problem with other types of beverages, such as tea, coffee or cola.

To clean the bottle, the lid has to be removed and the only section that can be hand-washed (with a non-abrasive soap) is the insertable section (so you don’t damage the battery port), while the rest of the bottle is dish-washer safe. As for the battery life, the Noerden LIZ is rated at one month (with one UV sterilization a day) and I haven’t had the bottle that long, but, so far, about a week in, it seems to be holding really well (when the battery is low, the LED will flash red). 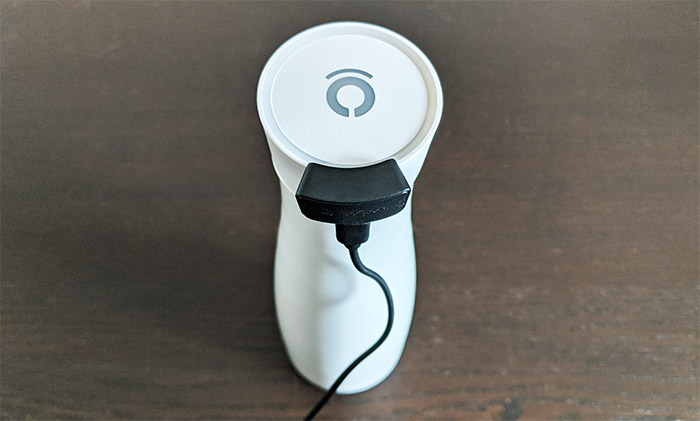 Note: It’s worth noting that on the bottom of the bottle, there’s a silicone pad which makes sure that the Noerden LIZ doesn’t move anywhere.

Conclusion
Even if more than 4 years have passed since the first smart water bottle hit the market, this type of devices is still not as widespread as one may expect and its understandable considering that most of us don’t need a constant reminder of when to drink water. Noerden LIZ does have the potential to solve a problem that a lot more people can relate to thanks to its UV sterilization, which can ensure that the water is cleaner and odorless. It’s also clear that the focus wasn’t towards the usual smart elements (app integration) and the truth is that I am a bit torn on whether to call the LIZ a smart bottle. But, considering that it does notify you when to drink water and the touch-sensitive lid does have some interesting functions, I suppose it can have a place next to some other smart water bottles – although, I do wish to see an app with the next generation of water bottles. 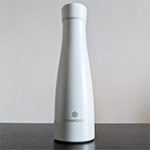