It’s worth mentioning that both WiFi systems use the MU-MIMO technology which allows multiple users to be served at the same time instead of letting them compete for the bandwidth, but be aware that the connected devices need to have compatible WiFi adapters in order to take advantage of this feature (and unfortunately, no, MU-MIMO is still not a wide-spread technology and it is mostly used with newer high-end routers or with some flagship smartphones). Furthermore both Orbi and Google WiFi take advantage of the band steering feature, so users get automatically moved to the better radio band.


In order to test the wireless performance of both Netgear Orbi and Google WiFi, I installed and configured one node of each systems, created a new network and connected two computers to the network so I could measure the wireless performance at various points inside the house – one computer is a laptop with an Intel 8265 2×2 MU-MIMO wireless adapter (which will work as the server, so it was connected via a cable) and a Desktop PC equipped with an Asus PCE-AC88 4×4 MU-MIMO WiFi adapter (the client). 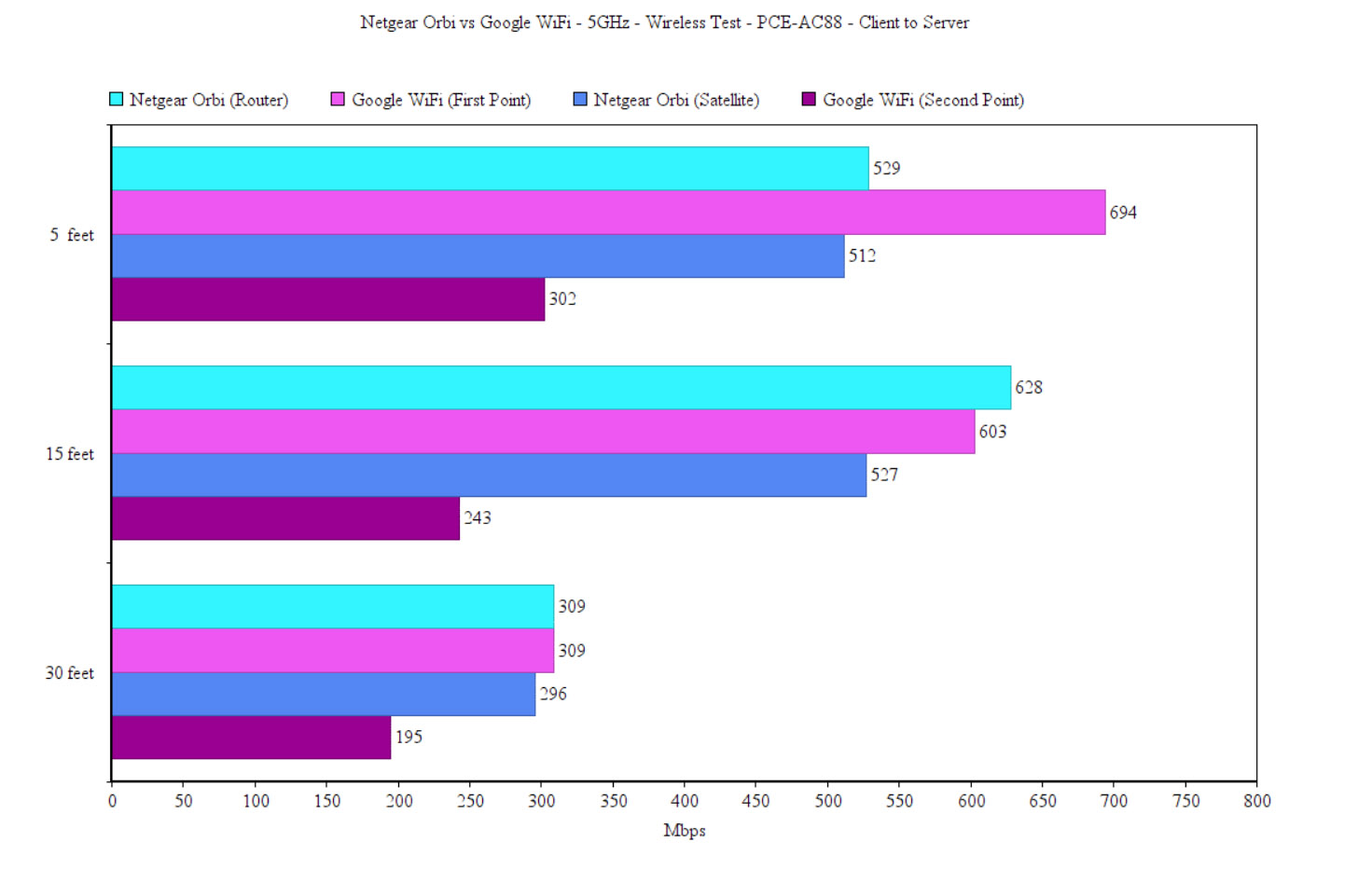 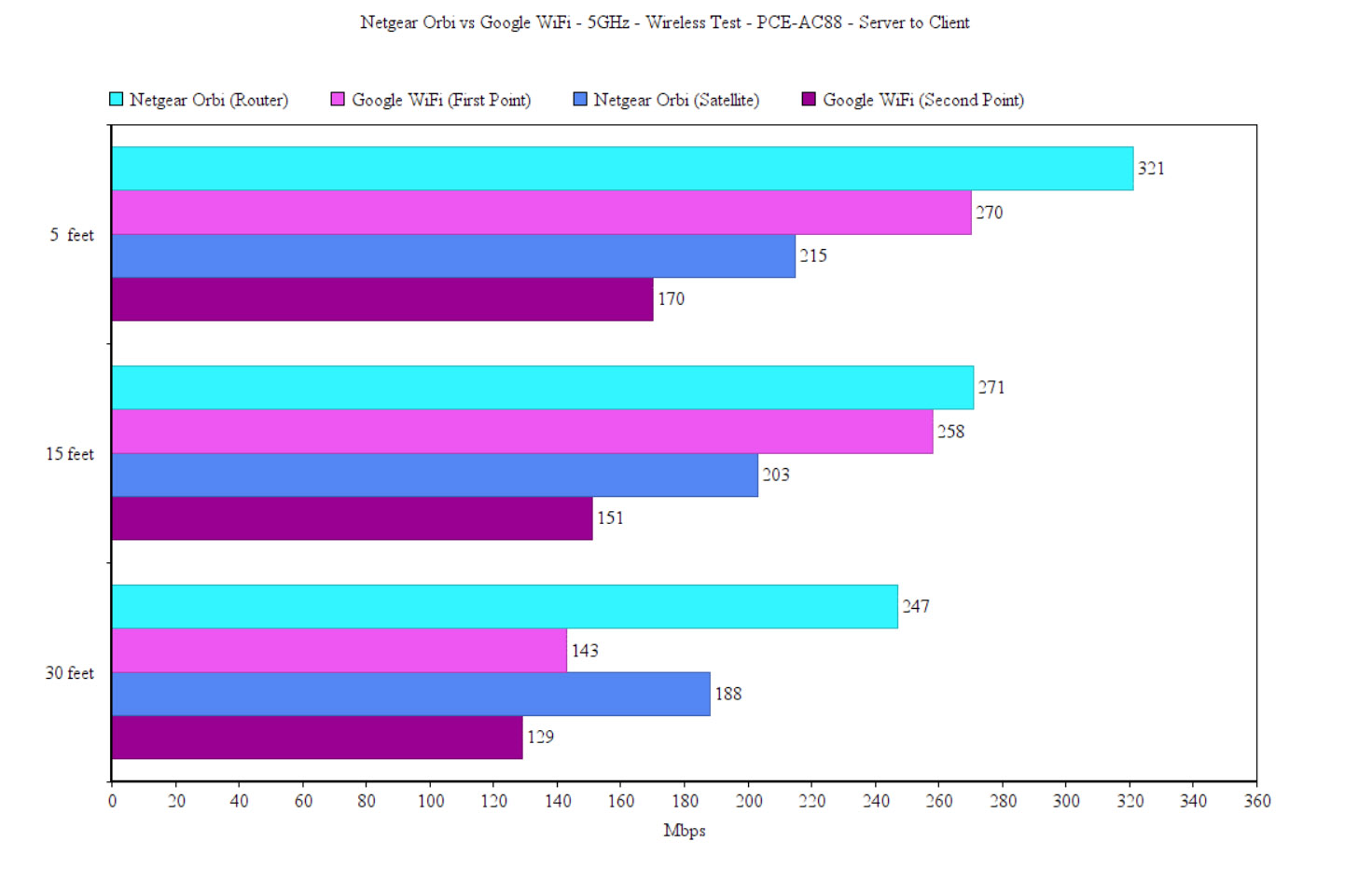 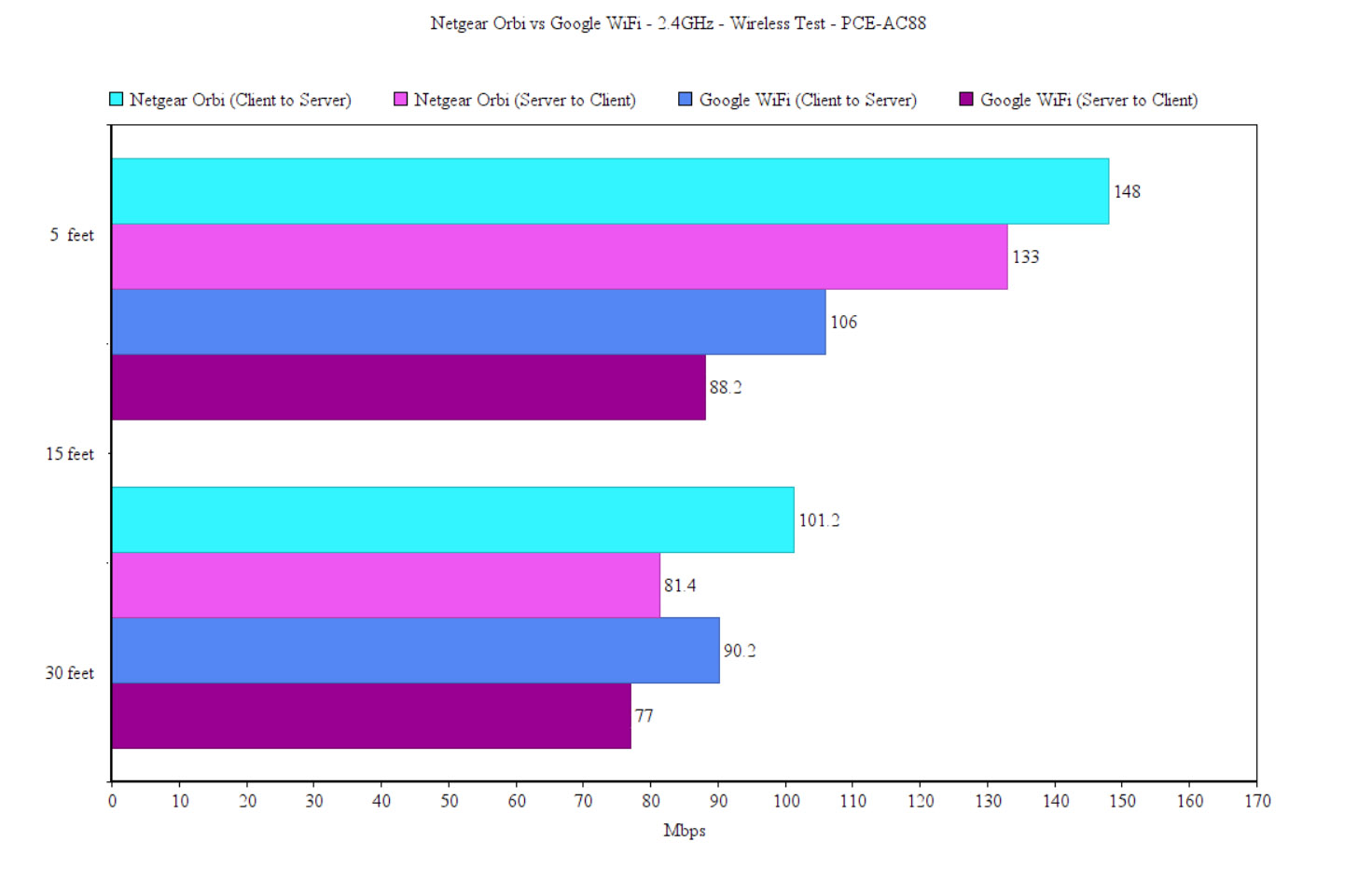 Verdict: The Netgear Orbi has had some rough years due to the constant instability from the newly added features, but, when everything is fixed and the system functions properly, you do get to experience the raw speed performance which exceeds every other WiFi system on the market. Overall, the Google WiFi is inferior when talking about the wireless performance (since it is only dual-band), but it has gained some popularity because of its stability and because it doesn’t require constant management and adjustments, you just plug in the units, connect the wireless clients and everything works perfectly for a very long time (well, if we ignore last year’s hiccup). At the moment, the Netgear Orbi is quite stable, so, because it is faster, it wins this round.


Setup and Interface
Google is one of the first router manufacturers to allow its users to configure, maintain and monitor the network using a mobile app and the initial wave of WiFi systems favored this approach, some of them even stripping off the web-based interface completely (such as the first gen Eero). From the beginning, Google had a clear understanding of how its WiFi system would function and what was the targeted audience, so it’s no surprise that it valued the simplicity and user-friendliness above anything else when it created the Google WiFi’s software.

The initial set up configuration can only be done using the mobile app (there is no web-based interface available) and, after it automatically detects the Google WiFi point, it consists of pairing the app to the router, selecting the location and choosing a name and password for your WiFi network (afterwards, you can add new WiFi points to the network and you can use the Test Now option to see if the node is not too far from the main Google WiFi unit). 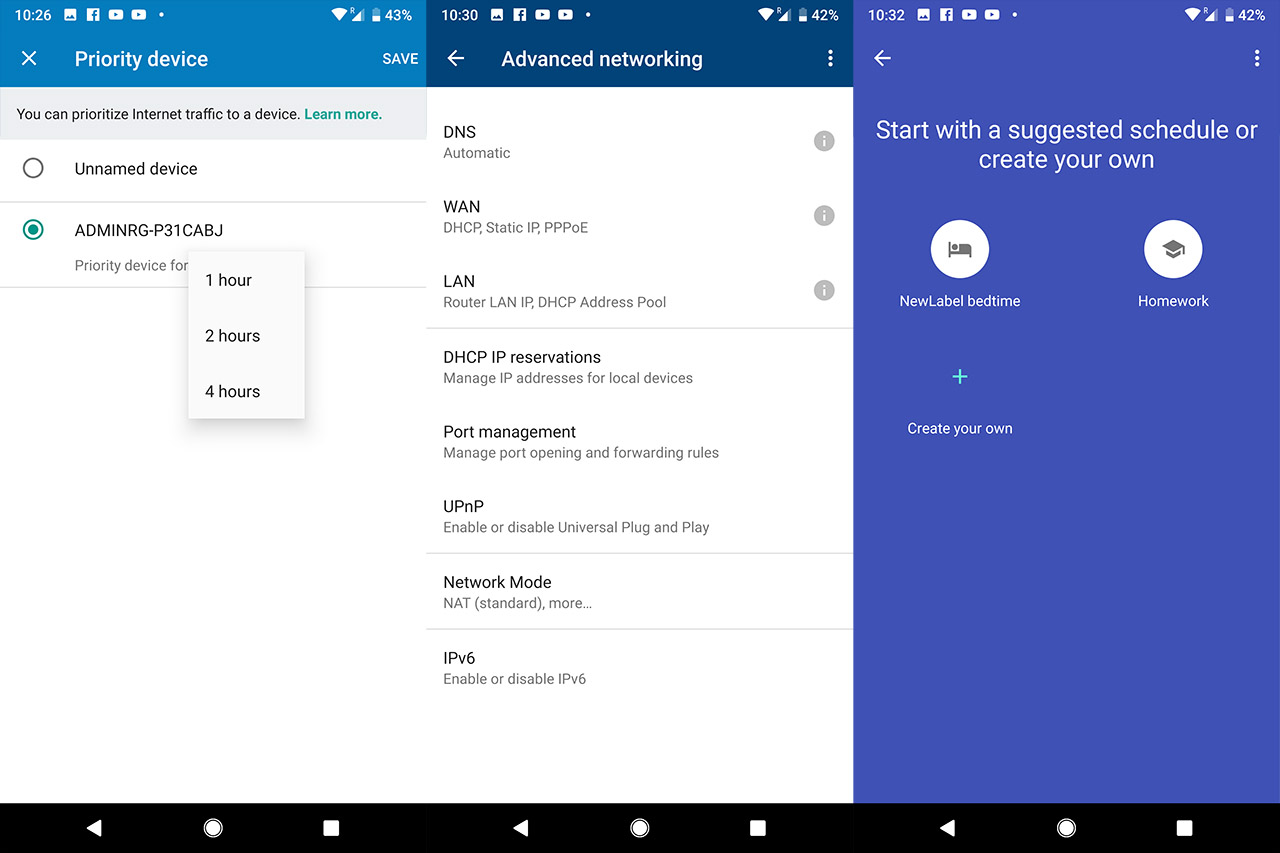 The Netgear Orbi gives the user the option to choose between the mobile and the browser-based interface and the initial set up process is quite similar whether you choose one or the other: you’ll have to configure the admin account settings (user name, password and secret question), as well as the SSID and the network passkey. Similarly to the Google WiFi, the initial configuration process of the Netgear Orbi felt really fast and I was able to browse the web in less than 5 minutes. Unlike the mobile app, I think that the web-based interface is more complete and offers a higher degree of customization. 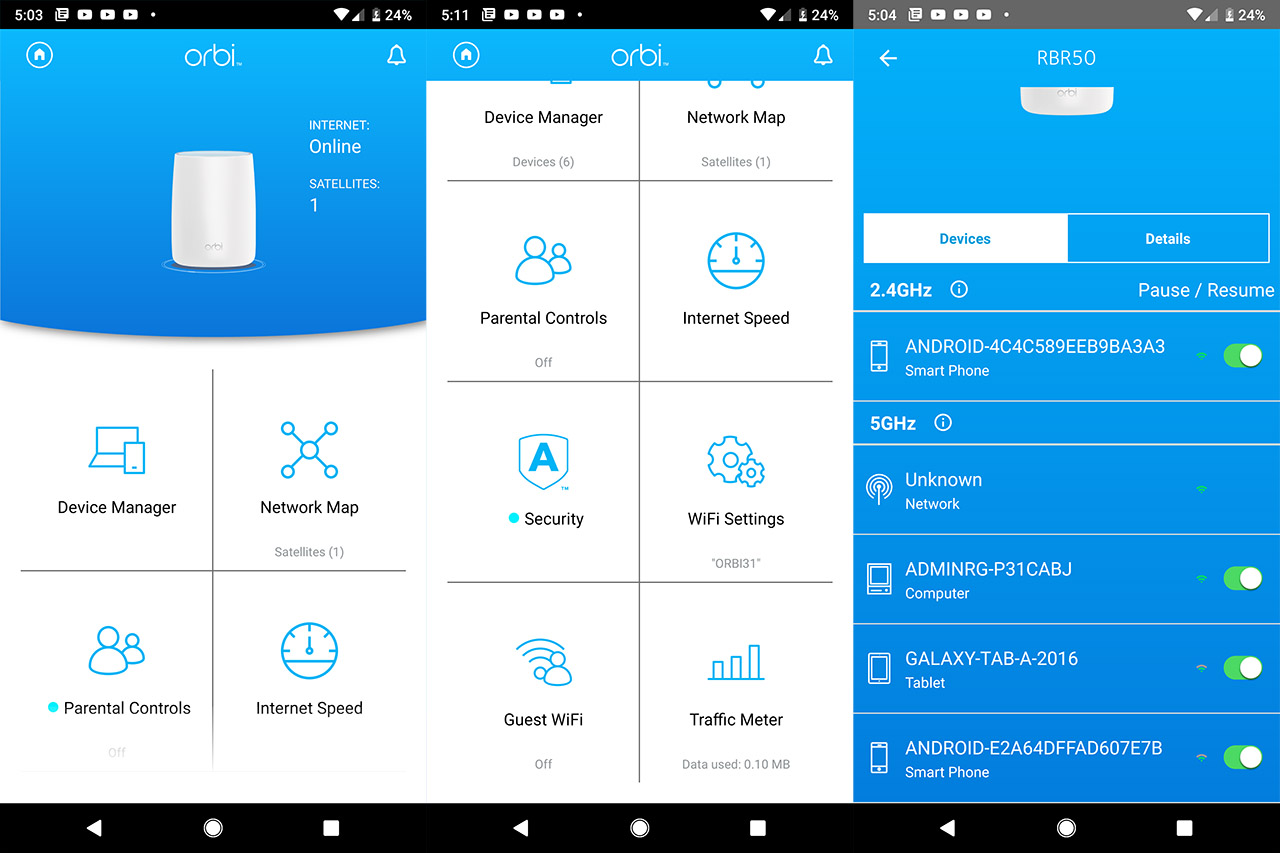 Some of the main features that the Orbi offers are the Parental Controls (additionally from the standard options, the Orbi also comes with the ‘Circle with Disney’ technology which offers a more complete set of Parental Control features: set time limits, create individual filters for each family member, pause the Internet connection by user or by device, view the browsing history or set a bedtime for some of your devices), Guest Network, Attached Devices (with the enabling of the Ethernet backhaul, it includes the ability to see the status of the satellite backhaul and the backhaul connection quality), Security (Netgear Armor), NAT Filtering, QoS Setup, Router/AP Mode, Port Forwarding/Port Triggering, VPN Service, Static Routes, UPnP, IPv6, Dynamic DNS and Remote Management.

The main features of the Google WiFi are the Guest WiFi, Priority Device, Home Control (suitable for connecting IoT devices using the IFTTT protocol), Site Blocking (blocks access to websites with adult content), DHCP IP reservations, Port Forwarding, IPv6 support and DNS.
Verdict: While I appreciate Google’s approach into creating a simple, user-friendly ecosystem for its users, where you don’t really have to know anything about networking in order to have a fully-functional WiFi systems, I favour more the Netgear Orbi’s traditional way, where it allows a more in-depth configuration of the network, even if the process is less user-friendly than that of the Google WiFi. So, from my point of view, the Orbi wins this round, but depending on what you value the most, the Google WiFi’s approach may be the better one for you.

Final Verdict
The Netgear Orbi and the Google WiFi are two of the pioneers of the modern WiFi systems, each taking a different approach on handling a large number of diverse clients and the backhaul traffic, but both having the same aim: to create a large network of multiple units which would operate as a single organism.
Of course, both have succeeded in this regard, but since the Netgear Orbi kept on trying to reinvent itself, it has often become less stable with newly added feature (which would exasperate some of the users that were constrained to wait for a patch in order to have a fully functional WiFi system again).

Despite being only a dual-band system, the Google WiFi has often been regarded as one of the best WiFi systems on the market simply for being more stable and reliable on the long run, even if it didn’t have all the bells and whistles of the more powerful tri-band routers.
That being said, when Netgear Orbi works properly, it blows away the competition especially from the wireless performance point of view, but if you don’t really care for the highest speeds and prefer a more stable system, then the Google WiFi can be considered the better WiFi system.