The Samsung X5 is one of the fastest portable SSDs on the market, relying on the 970 EVO NVMe drive to reach a sequential read speed of up to 2,800MBps and a sequential write speed of up to 2,300MBps and it also relies on the Thunderbolt 3 connector standard to actually allow this type of performance to and from your computer. Ever since the SSD drives have become a relatively inexpensive (and significantly better) alternative to the HDDs, the portable storage market has also gotten very popular due to their flexible deployment, ruggedness and, as of about a year ago, the accessible cost.

Some of the main representatives are the Samsung T5, the SanDisk Extreme and the WD My Passport SSDs, but all of these drives are capped at around 550MBps so, the natural step forward was to go towards NVMe and Thunderbolt 3, but this transition has proven to be very costly. 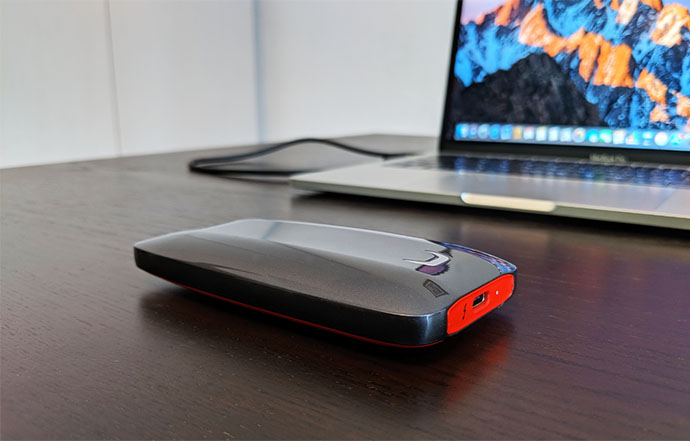 At least for now, because the X5 (and its alternatives from G-Technology) will eventually become even more accessible to the larger public, but, in the meantime, those that can afford the Samsung X5 and have a Thunderbolt 3 laptop (it is not compatible with the basic USB Type-C port) will be able to take full advantage of the drive’s phenomenal performance, so let’s have a closer look and see how Samsung has managed to build possibly the fastest portable SSD available and if there are any quirks that you should be aware of.

Design
When it designed the T3 and the T5, Samsung has focused towards making the drives elegant, yet rugged enough to survive a few tumbles to the ground by using a metallic outer shell which would surround the internal hardware, but that doesn’t seem to be the case with the X5. With the X5 drive, Samsung took some liberties with the design and, being inspired by supercars, it decided to create a more dynamic looking enclosure, with the top and the lateral sides being made out of magnesium alloy, while the bottom part (where rests the logo) being made out of hard plastic. 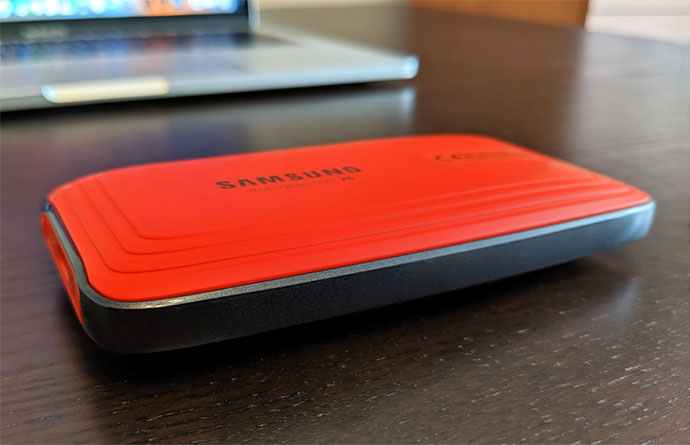 The metallic body does have a curve and will sit nicely in the palm of your hand, measuring 4.7 x 2.4 x 0.8 inches, so it is both longer and larger than the T5 (it also weighs a lot more – 5.3 ounces – but the weight does give it a robust feel). Unfortunately, Samsung decided to go with a single color combo, so, the bottom metallic part is covered by a gray glossy finish (which, on closer inspection will revel that it’s a smudge magnet) and the plastic bottom is covered by a red matte finish.

I know that Samsung went for that dynamic, flashy appearance but, when put next to the T5 external SSD, I can’t help but feel like the X5 looks a bit cheap, especially because of that aggressive red section (I do hope that the manufacturer will release some additional color options as soon as possible). On the positive side, the magnesium alloy is positioned on top of a protection guard and, together, they ensure that the Thunderbolt 3 drive will survive drops for as high as 6.5 feet (of course, the fact that there are no moving parts will also be of great help in this matter). Underneath the protection guard (inside the device), there’s a heat sink which should ensure that the temperature is kept within a reasonable level, but, in case the drive will get too hot, the DTG (Dynamic Thermal Guard) technology will ensure that the temperature will be reduced to normal, functioning levels – it will throttle the drive’s performance, so it doesn’t overheat and destroy the internal NVMe drive (the maximum allowed temperature is 45 degrees C or 113 degrees F). 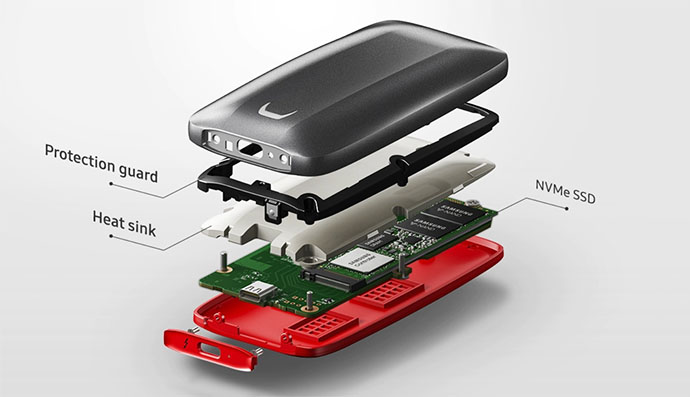 While testing the device, it did get unreasonably hot after a certain period of time and I did notice that the drive would slowly deliver a far inferior performance (such as if I ran the BlackMagicDesign benchmark over long periods of time). Theoretically, the drive should be easily opened by removing the red piece surrounding the Thunderbolt 3 port (there will be two screws underneath it) and the sticker on the top surface (underneath it, there’s a single screw) but, in practice, you will tear the paint with a screw, so, if you’re not willing to lose the warranty, I wouldn’t try opening the case.

Within the metallic enclosure, there’s a cut-out which is covered by the aforementioned red piece of plastic and inside it, there’s the Thunderbolt 3 port (next to it, there’s the lightning sign) and a small LED indicator (similarly to the Samsung T5, the LED will flash when data is being transferred and will stay solid white – instead of blue from the T5 – while it is connected to a computer). Even if it looks identical to the USB Type-C port, the main differences between the Thunderbolt 3 standard and the Type-C 3.1 port are the supported speed (which is up to 40Gbps for the T3 and 10Gbps for the USB 3.1) and the support for multiple 4K monitors (the USB Type-C 3.1 supports only one 4K monitor). 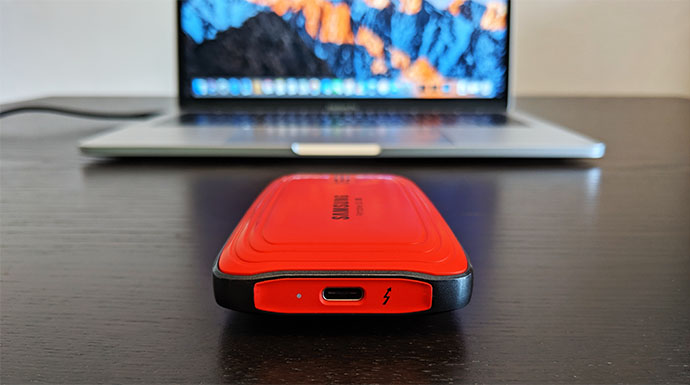 Features, Performance and Software
The Samsung X5 portable drive is equipped with 1GB of Samsung DRAM and a Samsung PM981 NVMe M.2 OEM SSD (which is the system builder variant of the Samsung 970 EVO NVMe SSD), so it is also using the 3-bit TLC V-NAND technology (along with TurboWrite). Samsung insists on calling it MLC (Multi Level Cell) which is not wrong, but it can confuse some users about the terminology and may suggest that it has a different technology than its competitors or that it goes faster than the advertised 3-bit (MLC is usually reserved for the 2-bit NAND and that’s why the other manufacturers use TLC, which means Triple Level Cell). 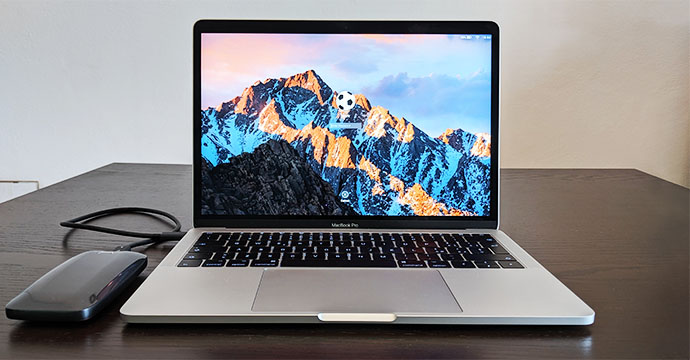 Still, Samsung may stubbornly want to use that term because of the TurboWrite technology which has the role of significantly reducing the latency by using a part of the TLC die as SLC (Single-Level Cell) to cache the writes which would then be later sent to the rest of the die when the X5 is in idle mode. By default, the Samsung X5 is formatted as ExFAT, but, if you format it to NTFS, the drive gains the TRIM support on Windows 10 which can make a difference for the drives longevity and increases the performance of the X5 by targeting smaller chunks of memory (called pages) instead of deleting whole blocks of data (which is both slow and can wear down the memory chips). If you are going to use the Samsung X5 with a MacBook, then you can choose between APFS or HFS+ (which do help a bit with the small file writing speed).

In terms of security, the X5 offers an optional password protection using the AES 256-bit hardware encryption and, since there is no performance penalty when enabling the password, I am going to assume that it works in the same manner as on the T5, but, unlike it, the X5 doesn’t seem to be affected by the recently found encryption flaw. If the X5 hardware encryption is not enough for your need to have a better data protection (the drive can be opened, so its internal hardware can be easily exposed), you can have a look at some dedicated hardware-encrypted drives from iStorage (such as DiskAshur 2) or SecureData (the SecureDrive BT that is also using a Samsung SSD) which are truly impenetrable. 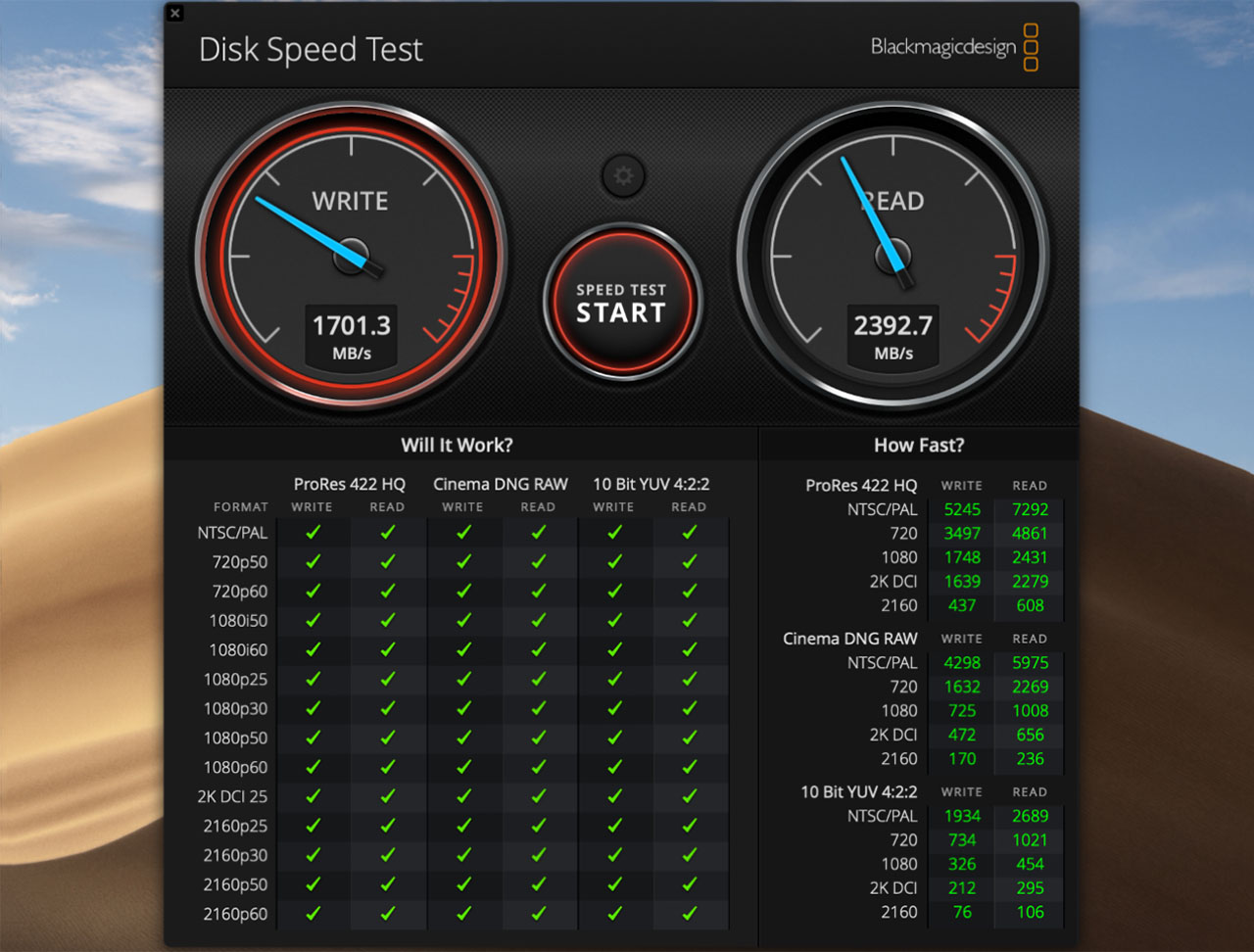 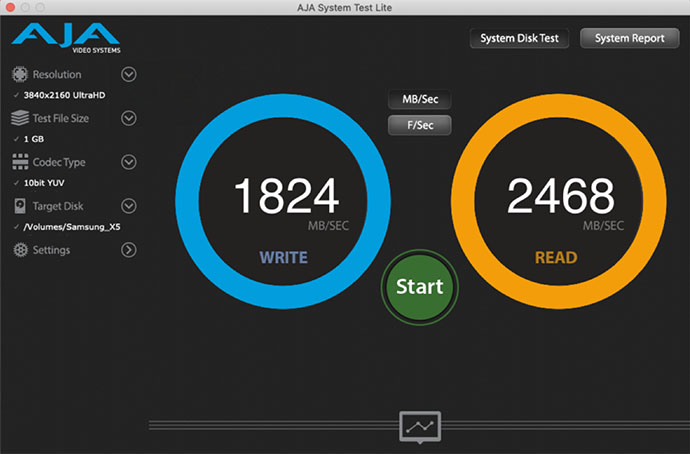 In order to test the Samsung X5 storage performance, I used a MacBook Pro (which has only two Thunderbolt 3 ports) and, after running the BlackMagicDesign Disk Speed test benchmark, I saw an average of 1701.3 MBps on the writing test and 2392.7 MBps on the reading test. Afterwards, I decided to run the AJA System Test (the resolution was set at 3840x2160UHD, the Test File Size to 1GB and the Codec Type to 10bit YUV) and it showed an average of 1,824 MBps on the write test and 2,468 MBps on the read test. Samsung said that the 500GB variant of the X5 has a maximum sequential writing performance of up to 2,100MBps (which is lower than what the 1TB and 2TB can offer – 2,300 MBps), but, both tests have shown that the advertised number is not really close to what the X5 can really offer (which is still plenty fast) – unfortunately, at the moment of the test, I only have the MacBook Pro with a Thunderbolt 3 port to test the drive (and yes, TRIM was enabled), so I can’t see if it will behave differently on a Windows machine. 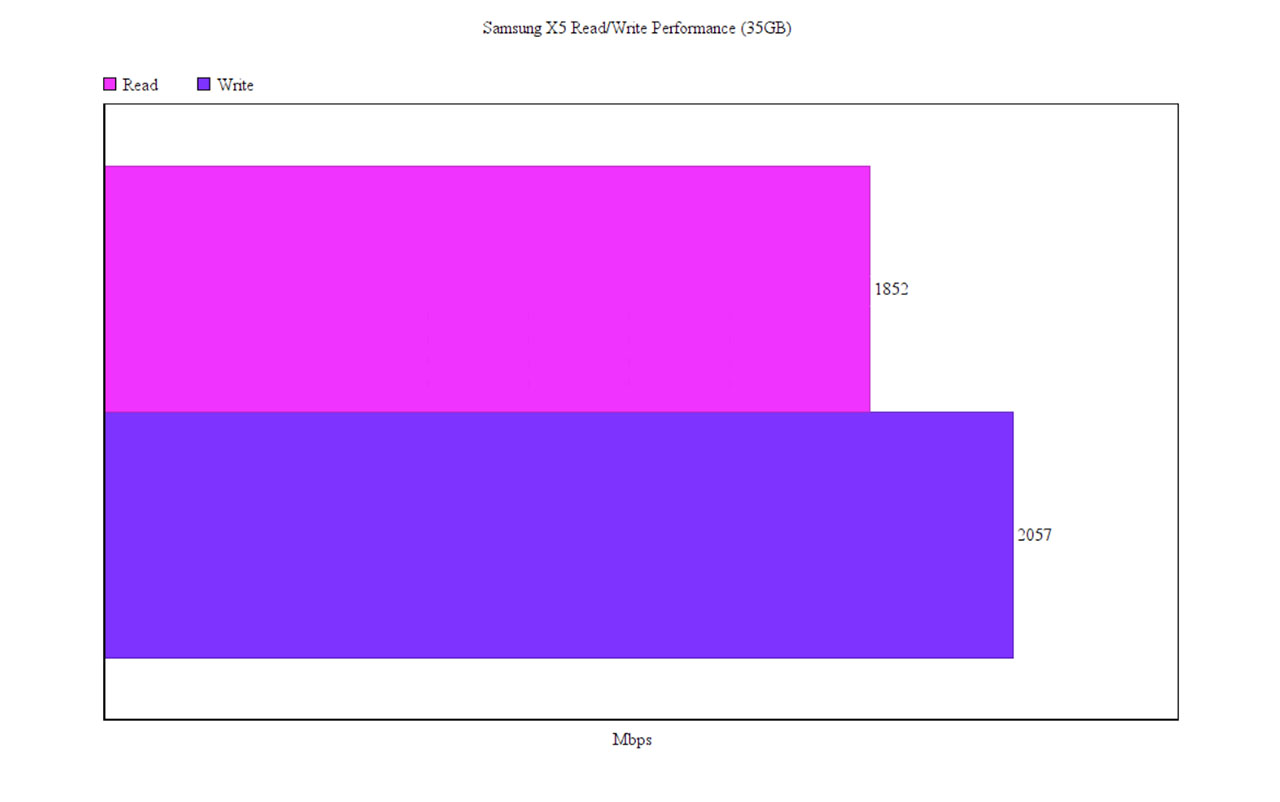 Lastly, I decided to move a 35GB folder containing multiple movie files and I measured an average of 1,852MBps while reading the folder and an average of 2,057 MBps while writing the same folder.
The X5 uses the same software as the T5, called the Samsung Portable SSD and it has the same functions as on its SATA sibling: immediately after opening the utility, you will be asked if you want to associate a password to the drive and, under Settings, you will be able to change the password (if the Security Mode is enabled) or Update the drive (if there’s a new firmware version is available).
Note: The Samsung X5 has a three-year warranty.

Conclusion
Samsung has always been one of the best in providing both an elegant looking external drive, as well as an excellent performance to go along with it and the X5 does deliver in both departments, especially from the speed point of view and not just purely for the technological advancement sake, but to offer a quick way for professional to transfer data (including the ability to run an OS from the drive). Not everything is perfect though, since the drive likes to get a bit hot (and the so called DTG ‘throttling feature’ will become active if the temperature exceeds 113 degrees F), but Samsung may perfect this issue with future updates, so, for now, this is one of the fastest external SSD drives available – if you’re looking for an even faster speed performance, then the 1TB and 2TB versions of the X5 are the better choices (bear in mind that they’re also more expensive). 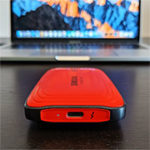