The TP-Link Archer AX50 is one of the first WiFi 6 routers released by the Chinese manufacturer and currently, it can be considered the low-mid-range model from the series since TP-Link wanted to be competitive at almost every market segment, trying to keep the aggressive push from Netgear and Asus at bay.

Being a part of the draft-stage, the TP-Link AX50 (AX3000) offers a similar feature package as the RT-AX58U and the Netgear RAX40 which is no surprise since these are its main competitors. So expect some WiFi 6-only technologies such as OFDMA and some improved ones from the WiFi 5 standard which includes MU-MIMO, 1024-QAM and the 160MHz channel bandwidth. The manufacturer has also developed a security package called HomeCare which includes QoS, content filtering and an antivirus which comes at no cost with the Archer AX50. 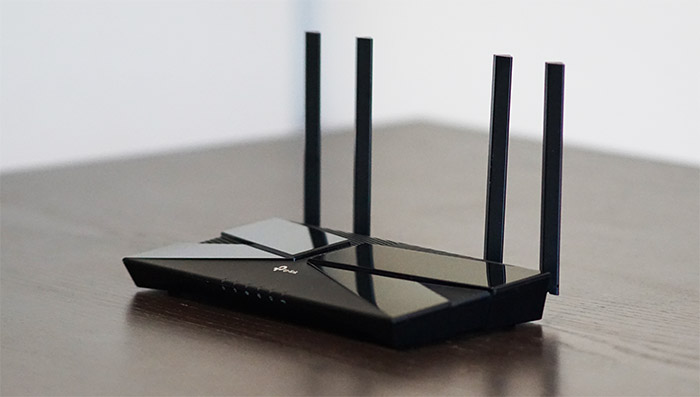 Furthermore, I saw that TP-Link has created an alternative to the AiMesh called the OneMesh which includes a few WiFi 6 routers, but not the Archer AX50 and, on closer inspection, the reason seems to be the Intel platform since apparently, only the Broadcom models can be used to create a mesh network. And this creates some concerns. I will need to check whether there is some hidden jitter issues (as I did with the RAX40, another router that uses the Intel platform) and, since I have already tested the RT-AX58U and the RAX40, I am very curious whether the AX50 will have similar issues with some AC clients, especially when using the 160MHz channel bandwidth.

IMPORTANT: Many users have noticed that when the TP-Link Archer AX50 is in Access Point mode, the Clients section doesn’t properly detect the connected devices. I was able to reproduce the issue by connecting three wireless clients to the AP and only one appeared, the one from which I was accessing the web-based interface. The interesting thing is that after I accessed the web UI from the other client devices, the AX50 would add them to the Wireless Clients list. There is an on-going thread on official TP-Link forum (and special thanks to Scott Miller for letting me know about the issue).

Some manufacturers have gone overboard when designing their new WiFi 6 routers, but the entry-level segment has been relatively conservative which remains true for the TP-Link Archer AX50 as well. I am not entirely convinced about the black ribbon design at the top (it gives me a funereally vibe), but it’s far better than the other TP-Link models which end up looking silly, especially the higher-end ones with their multitude of antennas. The Archer AX50 only has four antennas which can’t be detached (therefore non-upgradeable) and the plastic case is very compact, but since it does have a bit of weight, it does not feel cheap. Indeed, at 10.2 x 5.3 x 1.5 inches, it’s only slightly longer than the RT-AX58U, but more compact in every other respect (while the RAX40 is far larger). This means that it should occupy less space from your desk, but I noticed the strange decision from TP-Link to omit the usual silicone feet from the bottom of the router. 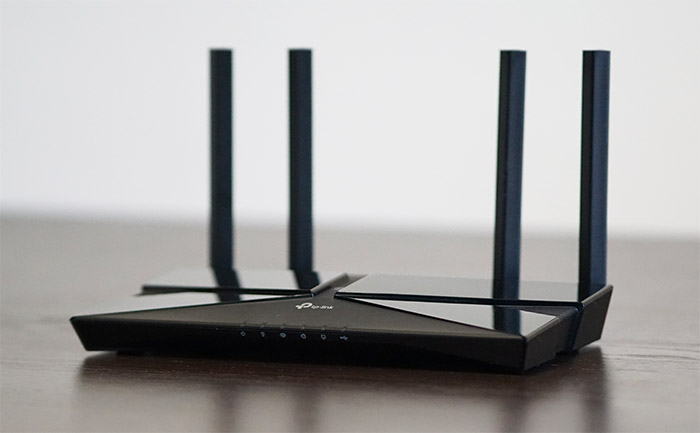 These feet have the role of keeping the device into place even after you have connected a few Ethernet cables, but the Archer AX50 will roam around on your desk, so it’s better to mount it on the wall – and yes, there are a couple of dedicated holes for mounting on the bottom side.

Here, you’ll also find lots of narrow cut-outs that cover almost the entire section and, to make sure that the device can keep the temperature down by relying on passive cooling, there are a few cut-outs within the ribbed patterns from the top part of the plastic case. And it seemed to be enough for a while to keep the temperature acceptable, but after putting it through various type of tests, I found that it got warm to hot at the top and bottom, as well the center of the case, but there were no signs of overheating (for now, anyway). TP-Link has positioned the LED indicators on the front edge which is fine, but can be a bit difficult to see the icons, unless you check them at an angle.

That being said, you get a Power LED (solid yellow as long as the router is connected to a power source), two LEDs for the WiFi networks (the narrower WiFi icon is for the 2.4GHz and the wider icon is for the 5GHz), an Internet LED, a LAN LED (yes, there is no separate LEDs for each LAN port) and a USB LED. If you turn the router around, from the left, there’s the Power port, the On/Off button, the Gigabit WAN port and four Gigabit LAN ports – curiously enough, it seems that TP-Link does have available another router (AX3200-class) that has a 2.5GbE port (I suppose it wanted to go after the RT-AX86U, but didn’t quite commit to it). Further to the right, there’s a USB 3.0 port (useful for connecting an external SSD drive or to simply attach an older printer), followed by the WPS/Wi-Fi button (press and hold to turn on/off the WiFi; quick press to enable WPS), a recessed Reset button and the LED switch (useful if the LED lights annoy you during the night). 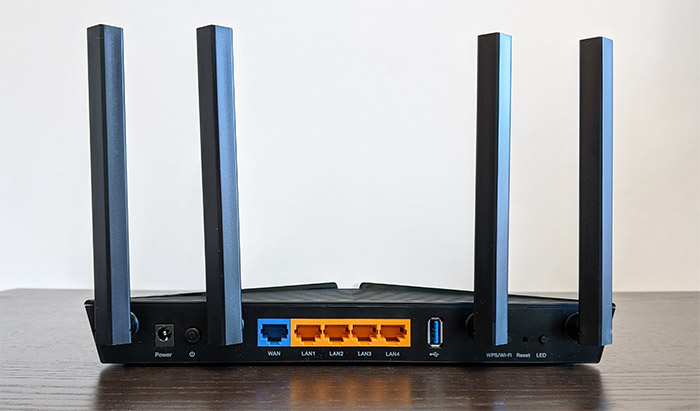 The tear-down process is quite simple as with most other TP-Link routers, so, in the case of the Archer AX50, you need to remove the two screws on the rear side (there isn’t one underneath the sticker, I checked..) and then use a prying tool to detach the plastic hinges to remove the top part of the router. This way, you’ll then be greeted by a PCB that is covered by two larger heatsinks which will need to be removed in order to expose the main components. To do so, you need to turn the PCB upside down and carefully remove the screws (and the metallic bracket) – on this side, I was able to see the first component, the 128MB of flash memory from ESMT (F59L1G81MA AZY1P0AMT). 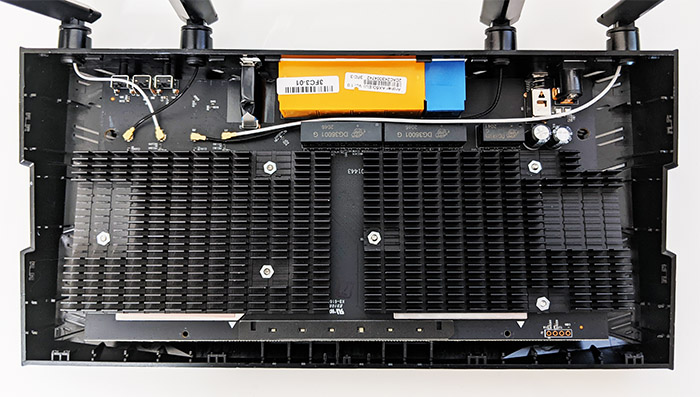 Note: For those that are interested in the maximum theoretical data transfer rate (which doesn’t really show the real-life performance of a router), know that the TP-Link Archer AX50 is an AX3000-class WiFi 6 router and the max data transfer rate on the 2.4GHz band is 574Mbps, while on the 5GHz band, it’s 2,402Mbps.

The TP-Link Archer AX50 has a similar feature-package to the other draft-stage WiFi 6 routers released by the same time, so expect the new TWT (Target Wake Time) which will do great with low-power devices (the devices are ‘waken up’ only when they’re needed) and there’s also the praiseworthy OFDMA feature. The Orthogonal Frequency Division Multiple Access is currently one of the best technologies to come from the WiFi 6 standard and it has the role to split the channel bandwidth into smaller sub-carriers (or resource units – the wider the channel, the more resource units and they can be of different size) which get assigned to individual devices into your network, ensuring a lower latency and far more bandwidth efficiency than before (with the WiFi 5).

It’s worth mentioning the OFDMA implementation should be up/dl on both bands, but so far, the manufacturer hasn’t disclosed whether the Archer AX50 does supports OFDMA dl/ul on the 2.4Ghz band. So, as you can see, the focus is now towards a better handling of the bandwidth, as well as of multiple clients, while the throughput may seem to take a secondary priority.
And it’s kind of true for these entry-level routers, while on medium-to-higher-end routers or wireless access points, the performance blows away any WiFi 5 contender (for example, check out the Engenius EWS850AP). But, as with other wireless performance-enhancing feature, you do need compatible clients to see a better throughput (if you only have WiFi 5 clients, the Archer AX50 doesn’t make much sense). The MU-MIMO technology has received more attention with the WiFi 6 due to its ability to serve multiple client devices at the same time, although it’s still barely supported by most manufacturer (some still add WiFi cards that support only 2.4GHz 802.11n). 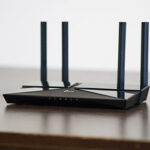