The TP-Link Archer AX21 is one of the three available AX1800 WiFi 6 routers from TP-Link and, while seemingly identical specs-wise, there are a few very small differences between the three (or more like two) models.

The rabbit hole of cloned routers is not that deep in this case because TP-Link has created two identical AX1800 routers, one called AX20 which is available online and the other is TP-Link AX1800 which is only available in some physical stores. This leaves the TP-Link AX21 as the new member of the previous entry level WiFi 6 model (now it went down to AX1500) and, to differentiate it from the AX20, the manufacturer gave it a new case (very similar to the AX73), a different type of RAM (although, the same amount) and a few new certifications. So, after all, it’s not really that different from the Archer AX20, right? 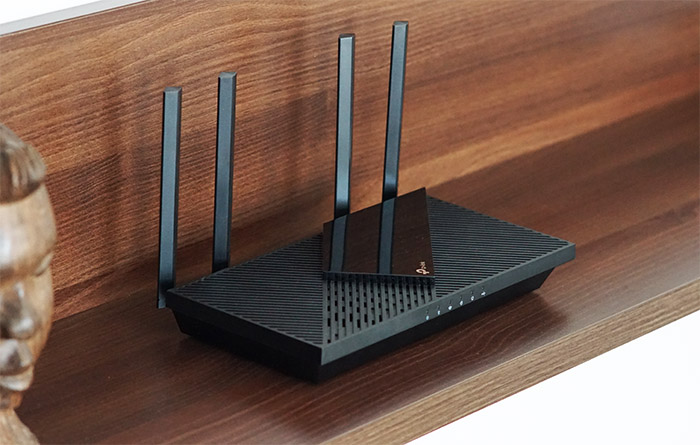 TP-Link has made a comparison table on their own website to showcase the ‘major’ differences between the two models, so you can judge for yourself if it can truly be called an upgrade over the AX20. In any case, you do get some of the features of the new WiFi standard (OFDMA, TWT), as well as some refined features from the previous standard, such as Beamforming and MU-MIMO. The TP-Link AX21 also supports OneMesh which, similarly to the AiMesh, it allows multiple compatible routers to form a mesh network. So, without further ado, let’s check the TP-Link AX21 and see if it’s worth considering over other AX1800 routers on the market (including the AX20).

Despite sharing most of the internal hardware with the AX20, the TP-Link Archer AX21 has a completely new case and the reason for the design change seems to be to improve the internal airflow. At least that’s what TP-Link says and, while I have not tested the AX20 myself, there are a few out there that have had the previous AX1800 model and I have not heard any complaints regarding the thermal management. Then again, I suppose you can improve an already good product and make it better. That being said, the TP-Link AX21 has a rectangular plastic case that is close in design to the AX73 – it has the same glossy piece at the top, but the top patterns are different. 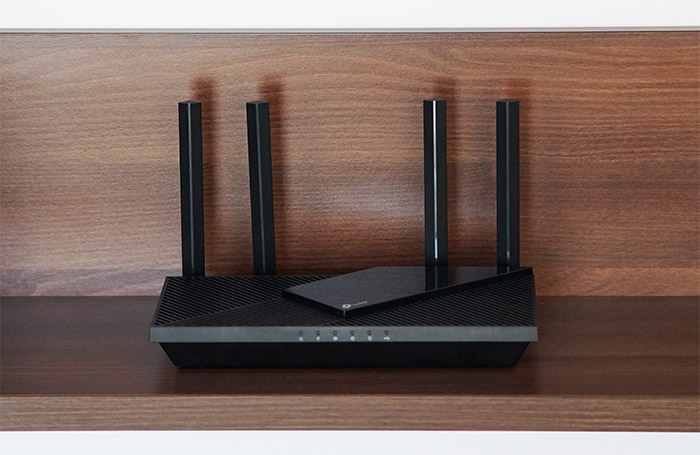 Additionally, the AX21 is a much more compact router than the AX73, measuring 10.2 x 5.3 x 1.5 inches, so yes, it’s identical to the Archer AX20. TP-Link has kept the four antennas that rise from the rear of the router and yes, you cannot remove them, nor can you upgrade them.

Since we already spoke a bit about the heat management of the AX21, it’s worth mentioning that the device does not overheat and it only got warm on the center-right side, especially at the bottom of the router, which is to be expected since that’s where the heatsink is positioned. TP-Link has learned from the mistake they made with the AX3000, where they ‘forgot’ to add some silicone feet which meant that the router would dance on the desk, so yes, the AX21 does have a couple of silicone feet on the bottom to keep the router into place and there are also a couple of holes in case you want to mount the AX21 on the wall.

The LEDs are positioned on the front of the router, so they’re relatively discreet, but you do get the option to turn the lights off if they bother you during the night. From the left, there’s the Power LED which will remain solid yellow (yellowish green) when the device is powered on and it’s followed by two LEDs responsible for the WiFi bands. 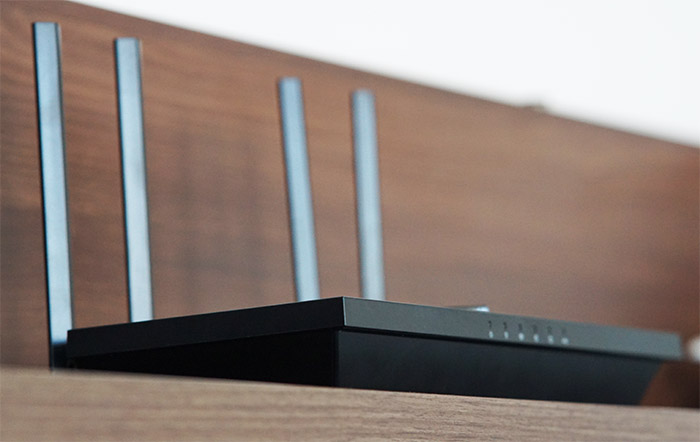 The first one is for the 2.4GHz network and the next one is for the 5GHz (I do think that writing them down specifically would have been better than the narrow and wider WiFi icons). The next LED will light up when there is a successful connection with the modem (just like Netgear RAX10 and the AX73) and the following LED will light up when you connect an Ethernet cable to any LAN port – yes, apparently LED lights are too expensive and one for each LAN port would have been too much (I am being sarcastic).

The last LED will light up when you connect a storage device to the rear-placed USB port. If you turn the router around, you will see the WPS/WiFi button (quick press to enable WPS and long press to turn on or off the WiFi), the recessed Reset button (press and hold it until the LEDs turn off in order to return the router to its default settings), the LED On/Off button and the aforementioned USB 2.0 port (the AX73 has a USB 3.0). Next to it, there’s a Gigabit WAN port, four Gigabit LAN ports, a Power button and a Power connector. 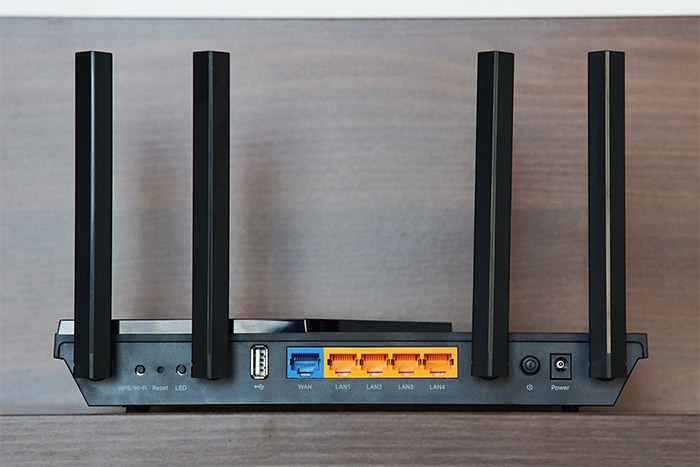 The tear-down process is very similar to the Archer AX73, so, to open up the TP-Link AX21, you need to detach the two silicone feet from the bottom and then remove the two screws underneath them (there is no warranty seal to break). Afterwards, use a prying tool to detach the top part of the case (there are no other screws) and the section should pop off quite easily. The interior looks fairly simple, with only a single aluminum heatsink covering a lot of the PCB – I noticed that two antennas are soldered to the board and two are not. One of the antennas that’s not soldered goes to Skyworks SKY85743 483848 5Ghz highly integrated front-end module (interesting that they decided to put it outside the CPU bracket group). Besides the antennas, I could see a Broadcom BCM53134SKFBG Ethernet switch and, to see the rest I had to remove the heat sink. 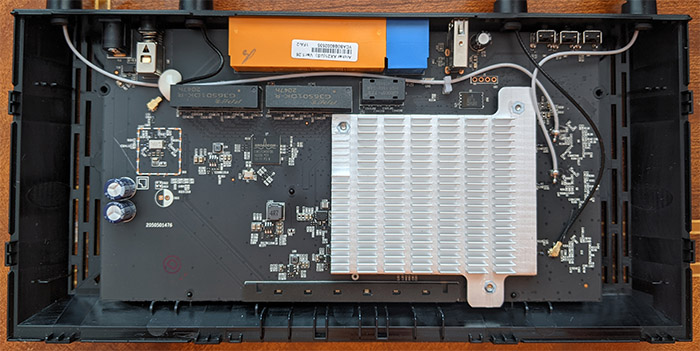 To do so, I had to carefully turn the PCB upside down and there are a few interesting things going on here: there are two antenna cable connectors going from one side of the board to the other (seems to go to the Skyworks amplifier). Afterwards, I removed the heatsink and the additional aluminum cover, I could see the quad-core 1.5GHz Broadcom BCM6755KFEBG CPU that had a badly placed thermal pad (I corrected it).

The TP-Link AX21 is a draft-stage WiFi 6 router (just like the large majority of other WIFI 6 routers), so it does come with a few interesting new features, from which the most important one is the OFDMA. The Orthogonal Frequency-Division Multiple Access technology has the role of improving the network efficiency and performance by dividing the available channel bandwidth into smaller resource units. These units can have various size and are allocated for a better communication with multiple clients – this technology will display a significant improvement especially with smaller data packets. 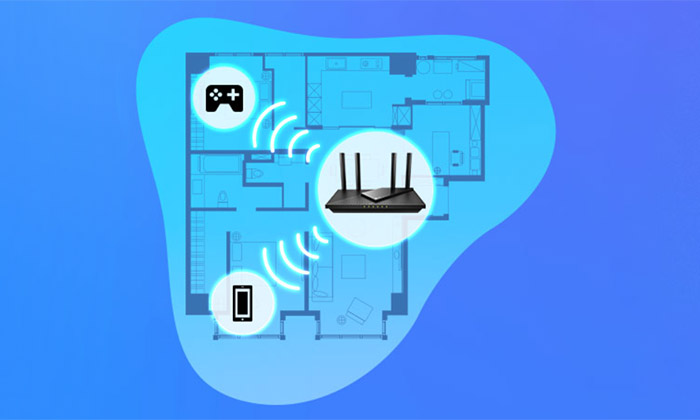 Another technology that has been ported from the WiFi 5 standard is MU-MIMO and it’s working in the same manner: it helps serve multiple devices at the same time, but the adoption rate is still lagging, even though the manufacturers have been preaching about a large scale implementation with most (if not all) WiFi adapters for years now (unless you get a flagship device, you won’t get it, yes, not even in 2021).
The BeamForming is still here and it will help point the signal towards the compatible clients, therefore limiting the impact of interference on the signal and improving the throughput. Lastly, it’s worth pointing out the OneMesh which was developed as a reaction to the growing popularity of Asus’ AiMesh and it has become a bit more mature over the years, with more devices being added to the compatibility list every few months. 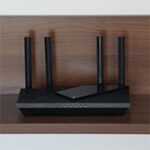