The TRENDnet TEW-825DAP is a simple AC1750 wireless access point which promises to be an affordable solution for smaller, budget-tight businesses and even for any user that wants to either expand its network to cover more ground with WiFi or just to move past the consumer-grade wireless router (which is not always that reliable).

But TRENDnet has to deal with a tough competition, especially in the SMB market and it seems that while every manufacturer pushes its Cloud solution forward, TRENDnet hasn’t yet developed a Cloud-based management platform for a quicker and easier deployment of multiple devices and instead, it relies on a physical LAN controller to perform some of these functions (such as managing multiple access points, configuring a global or by-group Captive Portal or enabling Opportunistic Key Caching and Fast Roaming). 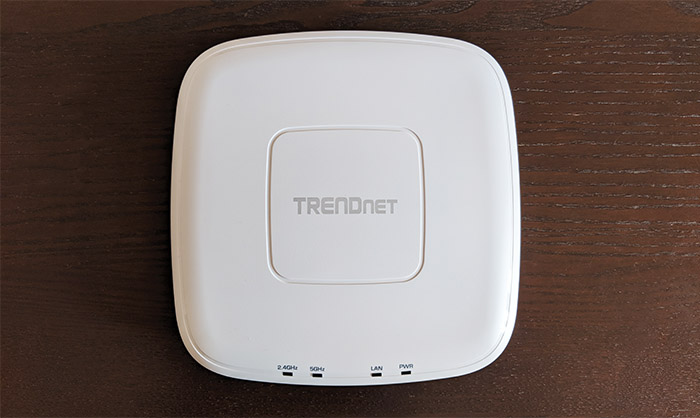 Of course, some may argue that, while a Cloud-based solution does come with some significant advantages, such as the ability to control multiple types of devices from anywhere in the world where there is an Internet connection, there is also the dependency on the manufacturer’s servers (which will hold all your data) and on the longevity of the offered support. The TEW-825DAP also doesn’t support the MU-MIMO technology, but it does come with PoE+ (and a single LAN port for unknown reasons), it supports IPv6 and has bandwidth control implemented so, while it doesn’t come with all the bells and whistles that I got accustomed to with newer wireless access points, where it lacks in terms of features, can it make it up in terms of raw performance? Let’s have a closer look at the TRENDnet TEW-825DAP and find out.

Design
The networking devices rarely try to make a design statement, so, unlike the WiFi systems which do promote a seamless integration with the furniture in the room, the industrial-looking routers or Ethernet switches usually stood out like a sore thumb. When it didn’t have long external antennas, the wireless access point was a bit less intrusive and the manufacturers have put a bit more thought into developing a minimalist design considering that the devices would most likely end up on the ceiling or the wall. The TRENDnet TEW-825DAP has all its antennas inside the case, while the plastic body does have some soft rounded corners and it is covered by a white matte finish in its entirety, well, with the exception of the couple narrow canals that surround the top surface of the device (which are glossy white). 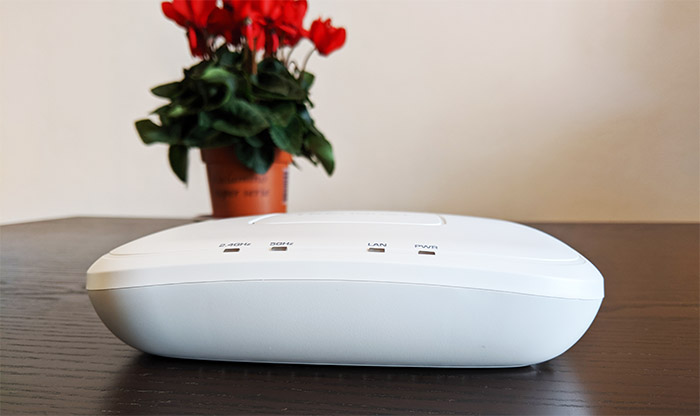 Immediately after I took the wireless access point out of the case, I noticed that, when put next to the TP-Link EAP245, these two devices are very similar in terms of design: both have the top logo surrounded by a small rectangular band (or canal) and both share a similar case shape.
Even the dimensions aren’t that different, since the TRENDnet TEW-825DAP measures 7.3 x 7.3 x 1.8 inches and the TP-Link EAP245 measures 8.1 x 7.1 x 1.5 inches, so they’re both a bit thicker than the average PoE access point (such as the slim Ubiquiti UAP-AC-PRO) and this does mean that the TEW-825DAP will stick out more when mounted on the ceiling (the increased thickness is a consequence of adding the DC-In Power port). If you turn the device upside down, you will notice that TRENDnet has covered the access point with some relatively small ventilation holes which go around the bottom area and in the middle, there are a couple of labels with info about the device (including the username, password, WPS PIN and more) and three holes for attaching the mounting bracket.

The PoE device do tend to run hotter than the non-PoE alternatives, so a larger case and more ventilation cut-outs will help properly dissipate the heat. While testing the TEW-825DAP, I noticed that the device would get warm all around the case and I did feel some hotter spots on the bottom side, towards the Ethernet port. Similarly to most PoE access points (with the exception of Open Mesh A60 and Zyxel NAP303), there are no silicone feet on the bottom, so it is advisable to mount the device on the wall or ceiling – you could keep it on the desk, but be aware that it can easily slide off. 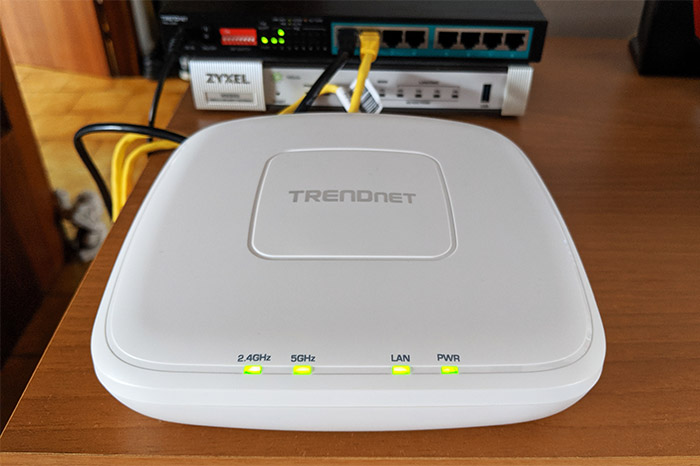 Returning to the top of the case, you can see that TRENDnet didn’t give into the new minimalist single LED approach (which I found extremely unintuitive) and instead, it kept the good ol’array of LED indicators to show the status of the device and network: from the left there’s the 2.5GHz and the 5GHz LEDs (will turn green when the WiFi is enabled and will flash green when the data is being transmitted), while further to the right, there’s the LAN LED (when you use the LAN port, the LED will turn solid green and will start flashing when the data is being transmitted) and the PWR LED (will become solid green after the device is powered on).

Unlike TP-Link EAP245 which has added all the ports on one side of the case, TRENDnet has carved a dedicated area within the body of the device, which should make it easier to tuck away all the cables if you mount it on the ceiling. From the left, there’s a recessed Reset button (press and hold the button for 10 seconds to return it to its factory default settings), followed by a DC-In port and lastly, there’s a single Gigabit LAN port which you can use to connect to the router (in case you use the provided power cable) or to connect to a PoE switch. 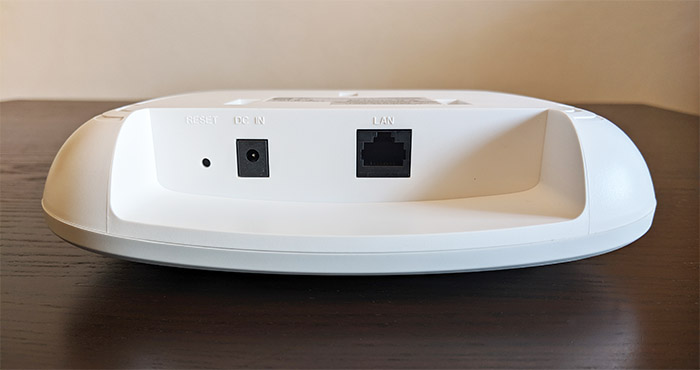 I noticed that the EAP245 also came with a single Ethernet port and I found this choice extremely annoying considering that you will most likely want to connect a wired client to your indoors wireless access point (this trick may work for outdoors wireless access points, where it’s highly unlikely to connect any wired clients – although the PoE outdoors cameras have gotten a lot more popular). This means that the only way to connect any wired clients to your wireless AP is by using a PoE Ethernet switch.
Note: It’s worth noting that the TEW-825DAP is IP30-rated, so it is protected against damages made by tools or thick wires (larger than 2.5mm). 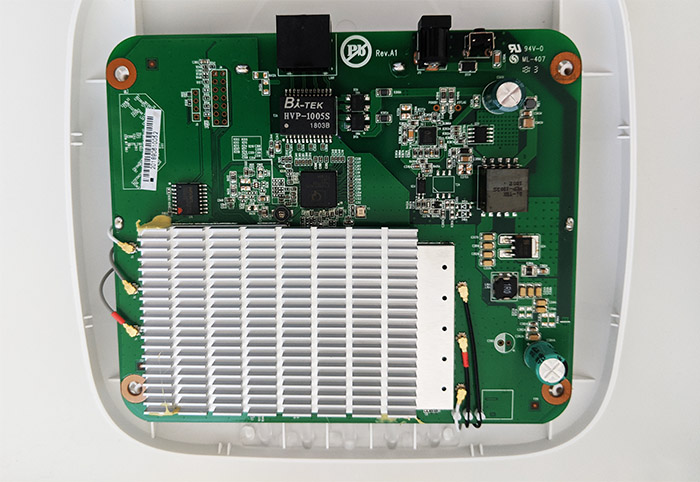 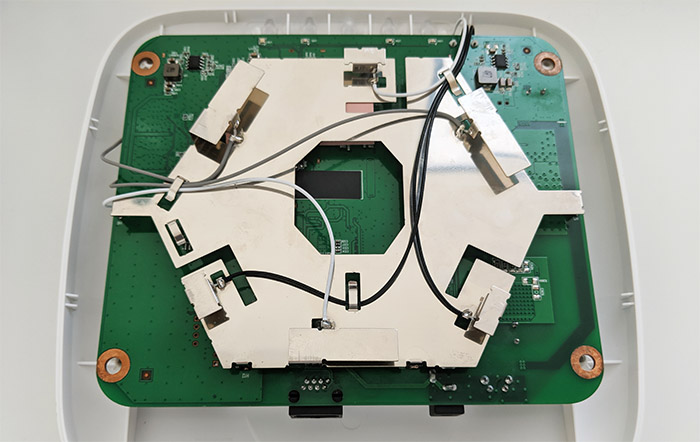 Performance
When connected to a wireless controller, the TRENDnet TEW-825DAP can be managed along with up to 127 other wireless access points (128 in total), supporting the 802.11r Fast Roaming technology (which ensures that the handshake between the two APs is done before the client initiates roaming through the building – so, if you move between areas inside a larger office, you won’t experience any disconnections despite moving from one access point to the other) and the Opportunistic Key Caching (which helps reduce the time required for the authentication – if the client moves towards a new AP, it won’t have to go through the pre-authentication process, instead, it will rely on the OKC to share master keys between multiple access points).

I know that the new trend is to create a mesh system from multiple access points, but TRENDnet doesn’t seem to support such a feature yet (which would enable support for multi-hop communication). When used as a single device, the main highlight of the TRENDnet TEW-825DAP remains the band steering ability which moves the wireless client to the suitable radio band, ensuring that neither the 2.4GHz, nor the 5GHz band gets congested and I noticed that the manufacturer didn’t add support for the MU-MIMO technology. 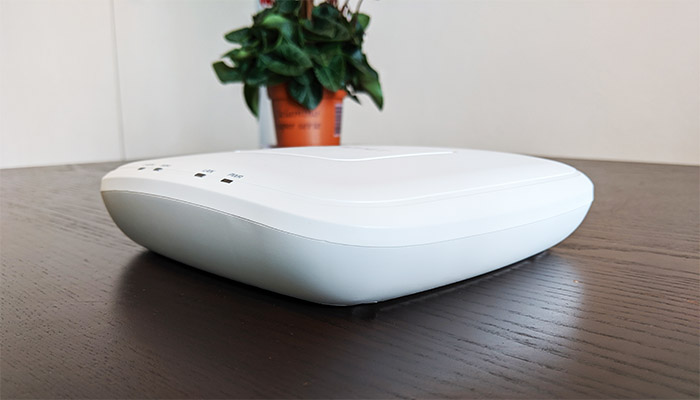 I know that this is not a mandatory feature, especially considering that the large majority of clients still don’t support it (and those that do, it’s only in its lesser forms), but it’s a fairly popular feature and some may have made good use of it (especially now, when the switch towards the 802.11ax is in full motion). Since it has a single Ethernet port, in order to test the wireless performance of the TRENDnet TEW-825DAP, I had to connect it to a PoE Ethernet switch (I chose the unmanaged TRENDnet TPE-LG80) and I had to use a couple of Ethernet cables, one to connect the switch to the router and the other to connect it to the server computer. Afterwards, I took another PC equipped with an ASUS PCE-AC88 WiFi adapter and I connected it to the 5GHz network (802.11ac standard). 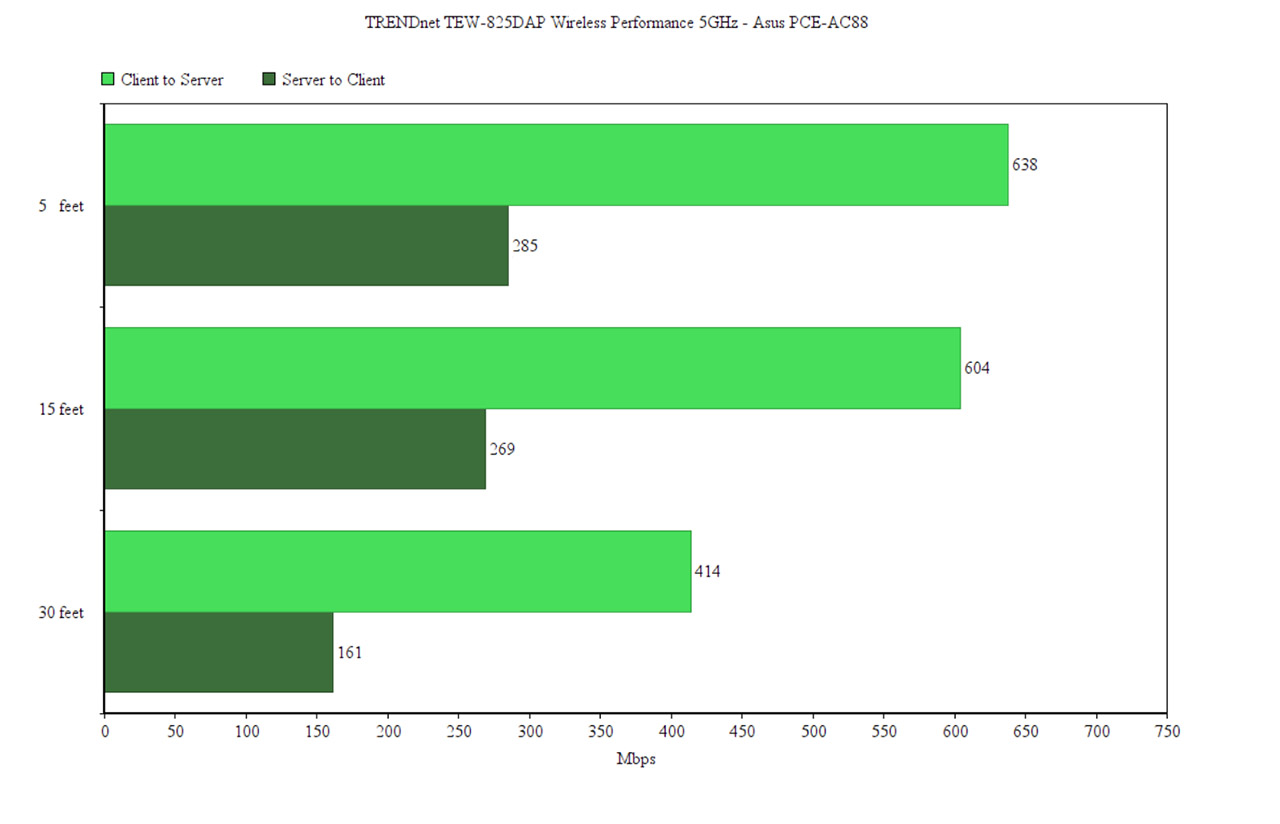 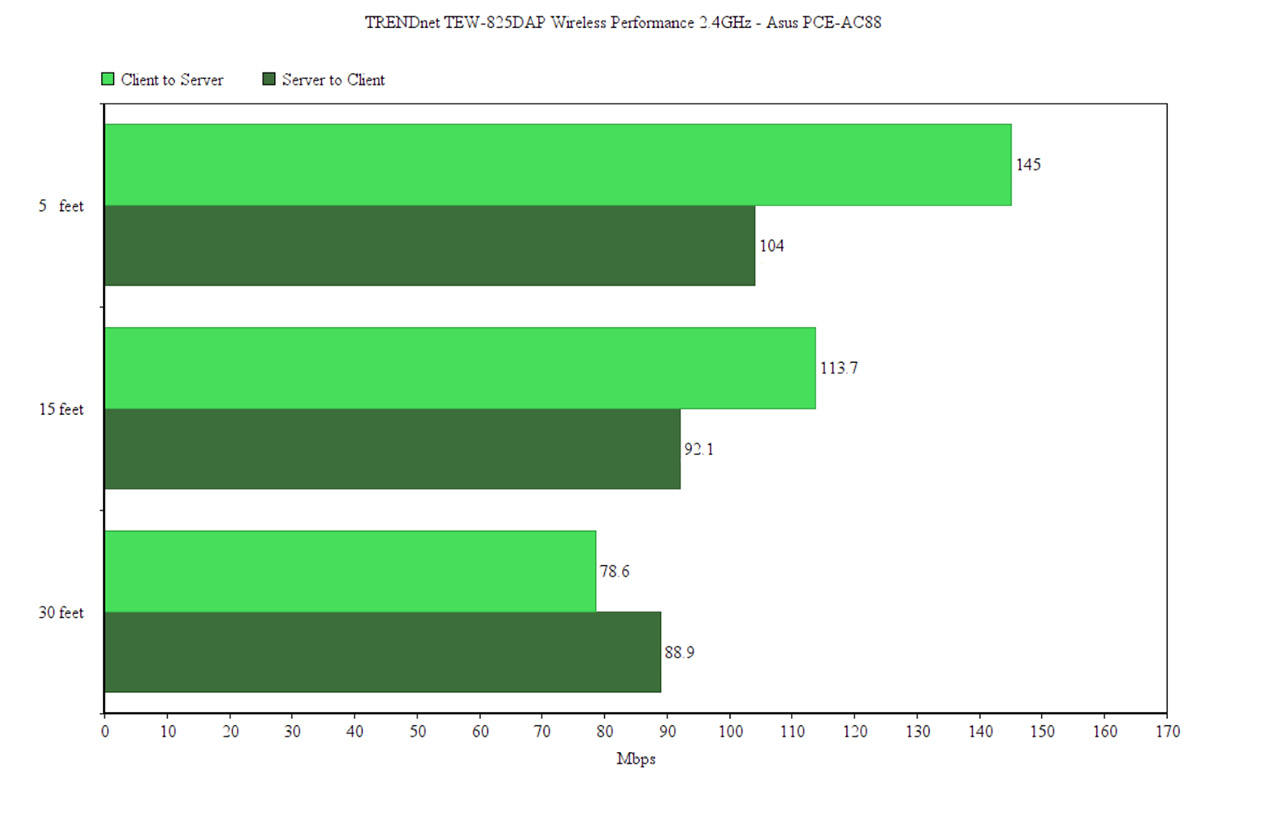 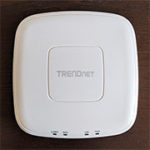