The Trifo Lucy does sometimes stop and moves around 360 degrees from time to time when, I think, it seems to not recognize the area, so the map is constantly updated, unlike the Lidar that creates the map a bit faster and the devices that use it seem more confident when moving through the rooms. The fact that you can view in real-time where the device is located on the map is a nice touch (similar to the Lidar robot vacuum cleaners) and I did like that I could view the live view from the camera (it was a new and cool experience). Also, it’s a great feeling not caring if you leave shoe laces or cables around. What about poop? This is a tricky one and Trifo managed to create a really good algorithm, so that it avoids pet poop as much as possible (it will see it as socks).

I put something that resembles pet poop in front of the robot vacuum cleaner and the devices seems to avoid it, but, as soon as the cleaning process is done, the Trifo Lucy no longer cares that the fake poop was there and merrily returns to its base, going over it. So, if your pets left you a gift, make sure that you check the map while the vacuum cleaner is cleaning your house because at the end of the program, it will smear it all over the floor.

The Trifo Lucy is the noisiest robot vacuum cleaner that I tested so far and that’s due to multiple reasons. First, that fan that always spins ensures that the device is never completely silent, then, there’s the air exhaust which is one of the most potent that I saw on a vacuum cleaner, let alone a robot vacuum cleaner. That being said, I took a sound meter and checked the dB values measured at about 2 feet away from the Trifo Lucy, while it was set at the lowest suction level. The silent mode is not really that silent since I saw an average of 51dB and then ramping it up a bit, it went to 53dB. 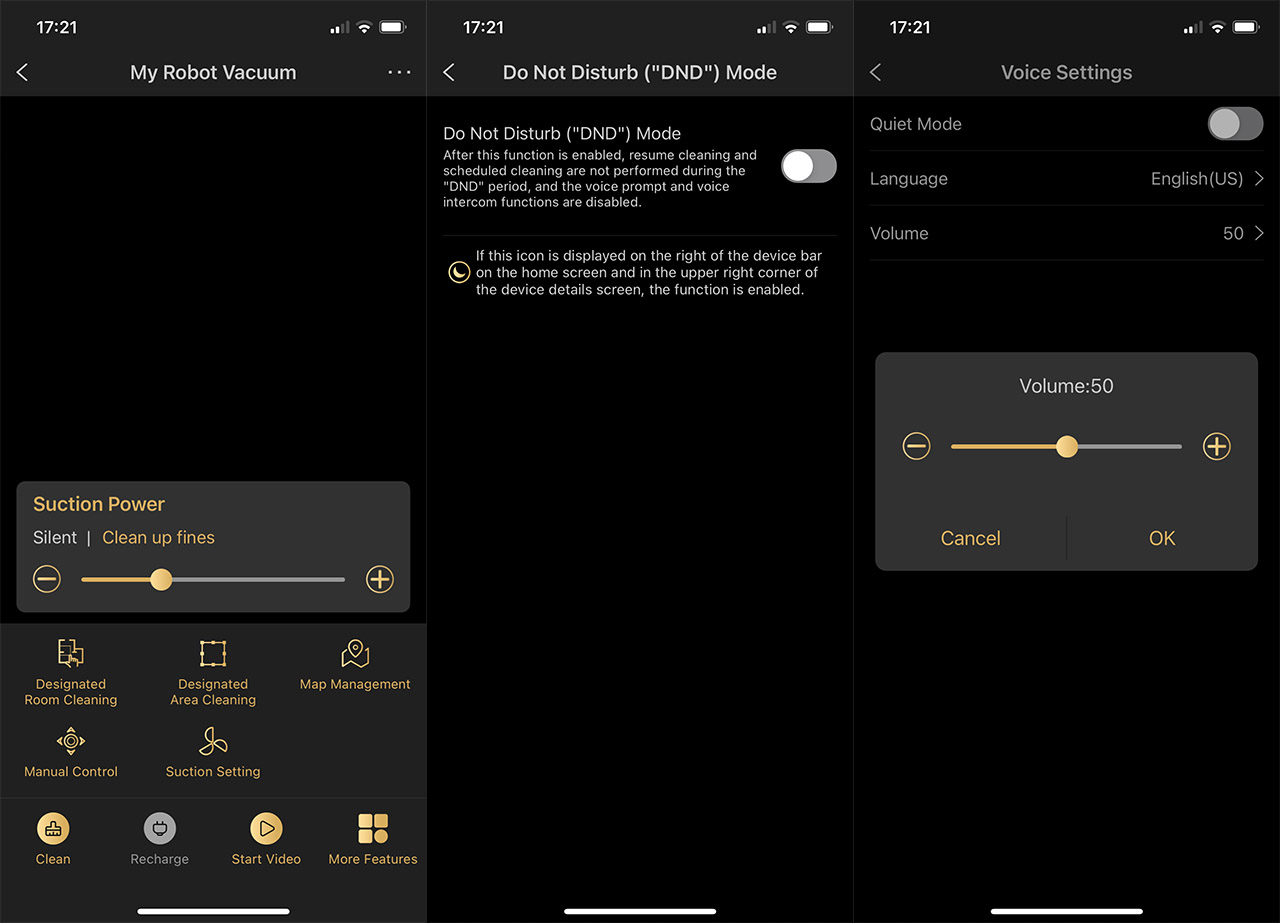 The standard mode gets a bit more noisy, sitting at about 56dB and then raising the suction power higher up to the maximum, it simply moved from 63dB to 65dB and then up to 70dB. So, it’s about as noisy as a regular vacuum cleaner and don’t even think about using it during the night, while you sleep, not even on the silent mode.

After the map is being created, you can add no-go zones and the Trifo Lucy will not enter that area. And it seems to work fine, the robot vacuum cleaner only edging that area, but not really entering it. The more interesting thing is the behavior of the device with the Designated Cleaning Areas. I have put a rectangle close to the charging station to see how it behaves with the fake poop and, while I don’t think the area that I drew was small, the robot vacuum cleaner certainly thought so because it just moved 360 degrees in the middle and returned home. Job well done! So, make sure to make the area big since otherwise the Trifo Lucy will just be scouting the area and do no cleaning.

Not really. The camera helps it avoid most obstacles, so no chance that it will go over an object that’s less than 1 inch, as it happened with other robot vacuum cleaners (such as the Roidmi Eve Plus). So it’s not going to get stuck on carpets, pieces of wood and then cry for help. If you do pick it up while the cleaning process is on-going, the Trifo Lucy will politely ask to be put back down and send a written notification to your phone to let you know that it was no longer on the ground. 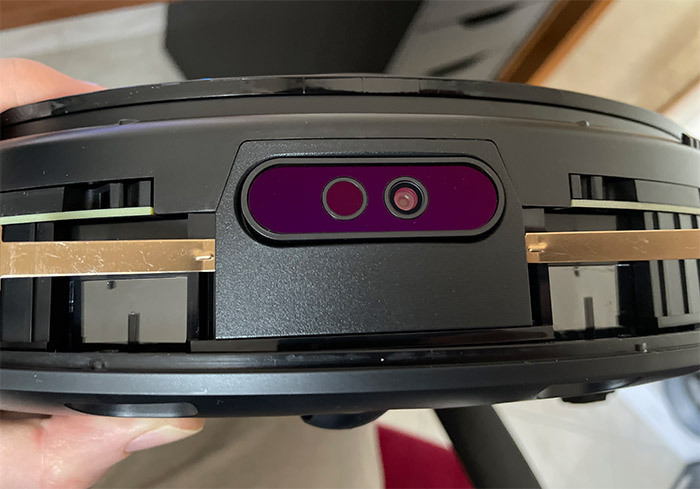 As soon as the battery reaches 15 percent, the robot vacuum cleaner will attempt to return to the base station and recharge it. And it does not get lost at all. Actually, I think the Trifo Lucy is the robot vacuum cleaner that found the charging station the fastest. Found is the wrong word because it knew where it was going and reached the destination immediately. The problematic thing is that it ignores everything on the map while doing so. Don’t leave pet poop on the floor.

The single side brush in combination with the rolling brush has proven to be decent on other robot vacuum cleaners, especially if the speed of the side brush wasn’t too high. But it’s also common for the lighter particles to be thrown around and then hopefully, the device will return and get it – it doesn’t always happen. And that’s with the Lidar system, while the vSLAM implementation on the Trifo Lucy focuses more towards avoiding certain objects (or living beings), than to detect dirt and to make sure that the robot vacuum cleaner passes several times until the surface is clean. So, it’s a bit of a gamble whether the surface was thoroughly cleaned or not really. Also, the edge cleaning feature needs to be enabled, so that the Trifo Lucy works a bit more next to the walls and furniture. In my case, since my house is 99% covered by ceramic and wood tiles, the performance was decent, but I wasn’t blown away. I needed to take the broom out for certain areas. 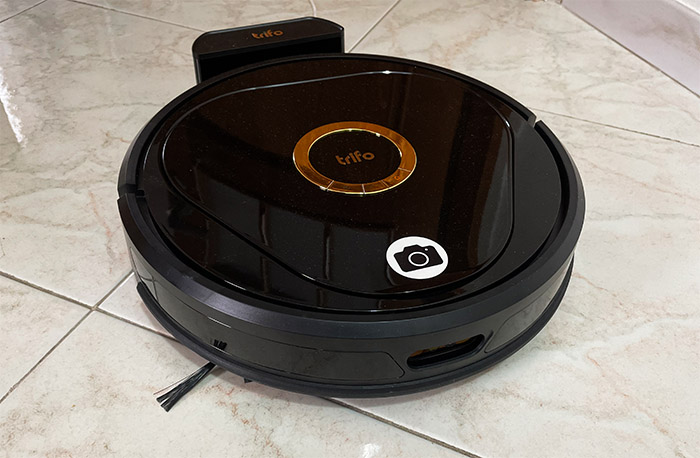 If you ramp up the suction power really high, the Trifo Lucy is able to remove larger and tinier debris particles (the test that everybody seems to love so much), but then again, the most important aspect is how it handles hair. The thing with carpets is that they tend to keep some sort of uniformity in terms of hair and dirt, so the vacuum cleaner would have to cover it in its entirety. And the Trifo Lucy does a decent job, even if the navigation feels a bit more chaotic. Know that in case there is a lot of hair, the rolling brush will get tangled very quickly and it will need constant cleaning. The side brush will also have lots of tangled hair, but that’s normal for this type of devices. The manufacturer is aware of this behavior and has released a more powerful version of this device called Trifo Lucy Pet which has a higher suction power and it comes with a pet hair extractor extension.

The mop is very easy to clean since you take out the cloth and put it into the washing machine. The rolling brush is easy to take out and cleaned, but the side brush is attached by a screw, so it’s not that easy to clean. The dust bin can be removed from the top (underneath the cover) and then you simply detach the top cover to let the dirt out. The rest of the vacuum cleaner and especially the lens should also be kept clean with a soft cloth (don’t submerge them in water). 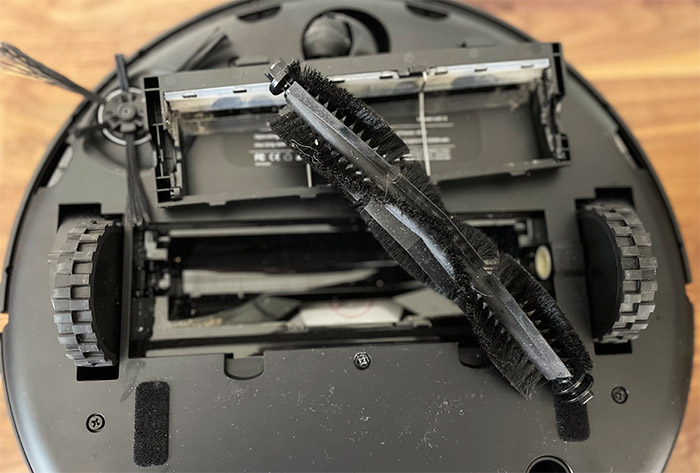 The Trifo Lucy has a 5,200mAh battery which is huge for a robot vacuum cleaner, but be aware that the camera-based navigation is very taxing on the battery life. Even so, the manufacturer advertises two hours of runtime. Was it able to reach that value? In my test, I left the suction level to the default state (standard) and the robot vacuum cleaner reached 15 percent a few minutes after an hour. I admit I checked the camera for a few seconds a couple of times, but I doubt that had much of an impact. I assume that the lab tests were made at the lowest suction power levels, which perhaps would get you closer to two hours, but, most of the time, it’s about an hour. That is, unless you have the entire house carpeted – then, the battery life will be even lower. 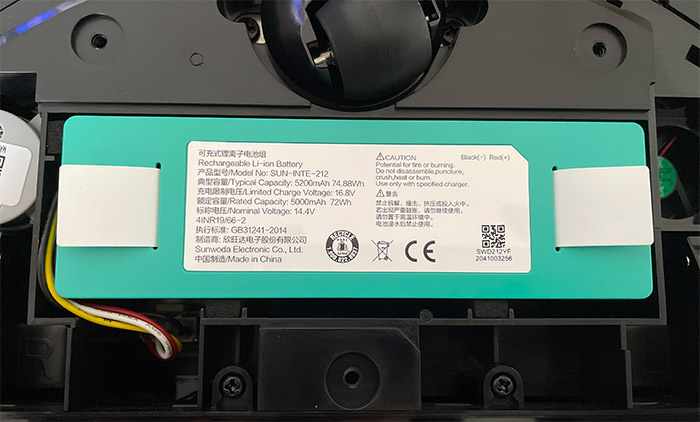 The fact that the internal components of the Trifo Lucy are so modular, it means that the device is very easy to fix. But, you will have to rely on what the manufacturer has to offer, because most seems to be custom built. The mop cloth pieces are proprietary, just like the mop assembly itself. The rolling brush, although removable doesn’t seem to be compatible with the Roborock clones that I have lying around, so you will have to rely on the manufacturer for pretty much all parts that may need to be replaced in the future. The HEPA filter seems to be universal, so this one you can get from third-parties.

As the title asks, is the Trifo Lucy a new addition to the security of a house. And the answer is yes, it’s actually really good at detecting movement, sending you a picture of any potential intruder. And it does so during the day and during the night (thanks to the night vision camera). But how good is it as a robot vacuum cleaner? It’s quite decent on hard floors, being able to avoid cables, socks and shoes which are the bane of the Lidar-based vacuum cleaners. But, there are a few shortcomings as well since the device ignores the obstacles on the map when it returns to the charging base (the pet poop stories remain true for the Trifo Lucy as well). The carpet cleaning performance is less impressive, but the manufacturer does suggest that you get the Pet version if you have the house covered with carpets. Overall, I feel that the algorithm behind the Trifo Lucy has gotten a bit better than a few months ago, but there is definitely a lot of room for improvement (especially since the hardware seems to be excellent). 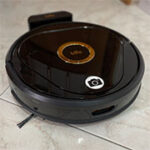