The Ubiquiti U6-LR (Unifi 6 Long Range) is one of the best WiFi 6 access points that the manufacturer has developed so far and, alongside the U6-Lite, the U6-Pro and the newer U6-Enterprise, Ubiquiti manages to cover the entire market spectrum, allowing for an easy transition for any SMB (or SME) that may want to make the switch to the newer WiFi standard.

But, while Zyxel, EnGenius and TP-Link have released powerful WiFi 6 access points a couple of years ago, proudly showcasing the best that the standard could offer, Ubiquiti didn’t really care about its competition. So it took its time, only recently making available a 2.5GbE WiFi 6 access point. The Ubiquiti U6-LR still offers a 1Gbps port and, considering the price tag of the device, it makes a lot of sense. To be fair, the entire series is surprisingly affordable, but U6-LR supports 160MHz channel bandwidth, OFDMA, 4×4 MU-MIMO and the support for the excellent UniFi controller. 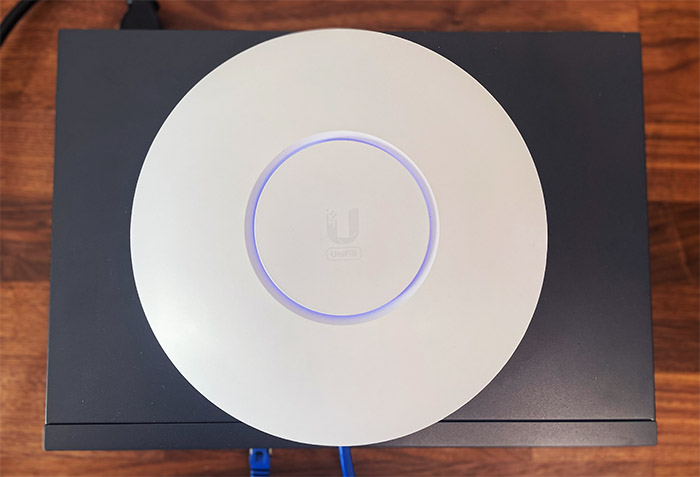 So, it essentially undermines any of its competitors, right? It can, but there’s a catch. The support for OFDMA is only limited to the 5GHz band, so, if you do have WiFi 6 client devices, the performance on the 2.4GHz network is not going to be that impressive. Most likely, the small networks won’t really notice a difference (when compared to the WiFi 5 access points), but the larger, denser ones will need OFDMA on both radio bands. I know that people are very fond of the UAP-AC-Pro and even the smaller nanoHD, so let’s check the Ubiquiti U6-LR as well and see if it really has a place up there, next to the best.

While the Ubiquiti nanoHD marked the transition towards smaller and more compact access points, it seems that the U6-LR made a step back, being both larger than the UAP-AC-Pro and far heavier. It’s nothing dramatic, since at its 8.66 x 1.89 inches (or 22.0 x 4.8cm), it still remains fairly compact for a WiFi 6 access point (unless we take the ECW220S into account). The reason why it’s heavier than any UAP from previous gen (1.76lb) is because the manufacturer went with a new antenna approach and there is a thick metal plate for heat management.

Indeed, after opening the case of the access point, I could see that Ubiquiti has changed the layout a bit and has made some additional steps towards keeping the temperature in check. The device will get warm near the single 1Gbps Ethernet port, but it’s not going to get hot to the touch (as it happened with some old Ubiquiti APs).
I did like that the design has remained the same, so the Ubiquiti U6-LR sports that characteristic circular plastic case covered by a white matte finish and that extra weight adds a bit to that ‘premium feel’. Don’t get me wrong, the Ubiquiti U6-LR doesn’t feel cheap at all, but we humans are a bit weird, so we associate heavy electronic devices to high quality.

At the top, there’s the LED ring which will be solid blue if everything is fine and the device is adopted to the UniFi. Otherwise, the LED will stay solid white waiting for the AP to be adopted. It’s also going to flash white when the Ubiquiti U6-LR is initializing and booting up, and, if it has lost connection to the network, searching for the wireless uplink, the LED will flash blue every 5 seconds. Not really a fan of the single LED system, as I said many times, but I admit it looks very cool on the Ubiquiti access points, so it gets a pass in this case.

If we switch the access point upside down, you’ll see the mounting area (where you add the bracket) and there’s a silicone cover, similar to what we saw on the UAP-AC-Pro. Is the Ubiquiti U6-LR suitable for outdoor use? It is IP54-rated, so it’s protected against dust ingress and it will also survive some water jets, so it is possible to put it outside, in a place still protected from heavy rains or snow. I also saw that the operating temperature ranges between -22 to 140° F, which is excellent for a device that’s not actively marketed for outdoor use. Removing the cover will reveal the single 1Gbps Ethernet port and the Reset button.

I have gotten so used to the plastic bracket that gets attached to the wall (ceiling) and then the AP gets rotated inside it, that the accessories that Ubiquiti has added inside the package have taken me by surprise. There is a metallic mounting bracket with various guides to help you easily drill the holes and, if it’s needed, there’s also a ceiling backing plate to keep the bracket into place (the Ubiquiti U6-LR is quite heavy). All the screws, nuts, anchors and the cable feed plugs are neatly packed in a manner that I have not yet seen with any other consumer-based or even enterprise-level networking devices.

That being said, the hardware installation doesn’t differ that much from other APs, attach the bracket on the ceiling, feed the Ethernet cable towards the device and rotate it into place. As you have seen, the Ubiquiti U6-LR does not have a power port, so it will only work with PoE devices, either switches or an adapter. And, unlike the nanoHD, there is no PoE adapter inside the package.

The process of removing the top cover is not easy because, just like on the UAP-AC-Pro, Ubiquiti pretty much glued the two parts together. So, a hairdryer + prying tool + lots of patience (and a cut on a finger) was all I needed to manage to detach the upper part. It’s obvious that it’s almost impossible to open up the Ubiquiti U6 LR without leaving some marks, so the warranty is most likely gone if you attempt to do the same. Also, opening the device will remove any resistance to dust or water. In any case, after finally gaining inside access, I was greeted by an interesting metallic plate with an intricate antenna design at the top (reminds me of the Zyxel WAX650S and the WAX630S).

And, to my surprise, the UniFi U6 Lite does not have this type of antenna, as revealed by the FCCID website, so I am more excited to see how well the Ubiquiti U6-LR performs with my client devices. I like that the manufacturer has labeled the antennas, so we know that there are three for the 2.4GHz radio and three for the 5GHz radio band.
The other two antennas as for the Bluetooth and the other is named SA (no idea what it means). The PCB along with the antenna plate can be detached from the bottom side (they’re held only by a heat pad) and this way, it’s possible to see the large metallic plate that Ubiquiti has put here and it’s useful for taking the heat away from the components and to push it outside.

One of the most important features that arrived with the WiFi 6 standard is the OFDMA (which stands for Orthogonal Frequency Division Multiple Access) and it works wonders at lowering the latency by improving the bandwidth use when connected to multiple client devices. So, it’s nice to see it enabled on the 5GHz band, but it’s missing on the 2.4GHz. Why is that? Some may argue that it was causing issues with older devices (especially legacy ones), but I am more confident that it was a cost-reduction strategy.

In any case, the performance on 2.4GHz radio should be similar to what we saw on the WiFi 5 Ubiquiti APs, hopefully. Besides OFDMA, there’s MU-MIMO which is only useful with compatible devices and I suppose their number has grown a bit over the last few years, at least in regards to smartphone or laptops. Lastly, there is the possibility to create a mesh network using multiple Ubiquiti access points (wireless Uplink), but will the U6-LR actually connect to nanoHD? And the answer is yes, these devices are compatible, so you can use them for this specific typology.

I was a bit curious about whether the specs list was wrong and maybe one of my multi-Gigabit Ethernet switches (such as Zyxel XS1930 or EnGenius ECS2512FP) would show a 2.5GbE connection, but no, it’s Gigabit. That being said, I connected the Ubiquiti U6-LR to a PoE switch, then connected a server device to the switch as well. The router also gets to be connected to the same Ethernet switch. Then, I got three client devices, the first is equipped with an Intel AX200 adapter, so it’s WiFi 6 and it supports the entire spectrum of features that the Ubiquiti U6-LR has to offer. Then, there is a laptop equipped with an Intel 8265 adapter (WiFi 5) and the Pixel 2 XL (also WiFi 5), but we’ll talk about them later.

Now, let’s see how the WiFi 6 client device behaves when it’s connected to the 5GHz network, 160MHz channel bandwidth. And the performance is good, especially near the access point because upstream, I saw an average of 888Mbps and downstream, it went up to 546Mbps. The throughput was good even at 30 feet, going to 377Mbps upstream (and 282Mbps down) while at 45 feet and roughly -72dB in signal strength, the speed went slightly underneath 200Mbps.

When the signal dropped to -88dB (at about 70 feet), the throughput was barely usable (14Mbps up and 1.4Mbps downstream). Switching to the 80MHz channel bandwidth, but keeping everything else intact, showed a slight decrease near the access point (compared to the 160MHz), but the throughput does look a bit better after passing 30feet (the signal strength also didn’t differ that much from the test using the 160MHz channel bandwidth). 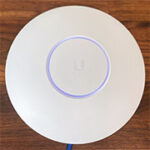