The Ubiquiti nanoHD was launched more than three years ago as a replacement for the Ubiquiti UAP-AC-PRO
and, while the smaller nanoHD didn’t immediately get into the public’s good graces, it is now currently considered one of the best WiFi 5 access points suitable for SMBs (and not only).

The reason for its initial unpopularity was because Ubiquiti decided to leave Qualcomm in favor of MediaTek and at release, there were some missing features (and a lot of bugs). The good news is that the Ubiquiti NanoHD was quickly updated and, since some time has passed from its launch, the access point has proven to be as reliable as its predecessor, while also offering more features and improving the wireless performance.
Indeed, the Ubiquiti NanoHD is not only smaller than the UAP-AC-PRO, it also features 4×4 spatial streams (5GHz) and there is now support for MU-MIMO, as well as the full integration with the UniFi Network controller. 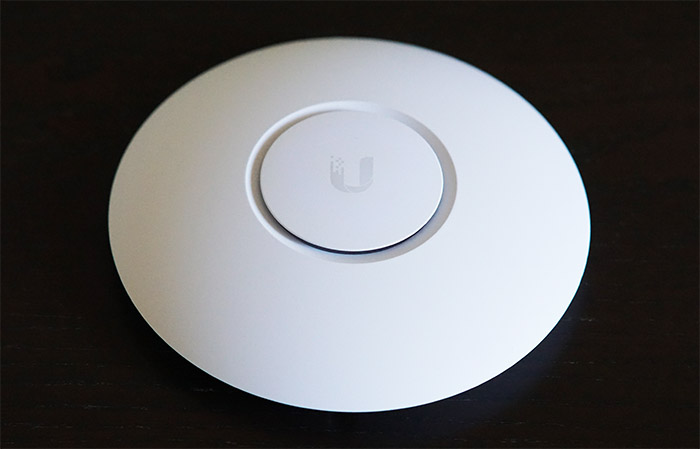 Yes, I know, the WiFi 6 standard is already here, so why bother with an access point from the last generation? I tested some mid-range AX routers (such as the Asus RT-AX58U and the Netgear RAX40) and the tech got better over the years, but even so, a reliable Wave 2 AC access point should be fine for a few more years. That being said, let’s have a closer look at the Ubiquiti UAP-nanoHD and see if it’s indeed a worthy successor to the UAP-AC-PRO.

UPDATE 31.12.2022: Since I decided to do a comparison article with the U6-LR, I have retested the 5GHz performance of the Ubiquiti nanoHD to include longer distance tests and the attenuation.

The Ubiquiti UAP-AC-PRO is one of the best designed wireless access points on the market, featuring a saucer-shaped case that would almost seamlessly integrate with the wall or ceiling and then there’s the circular LED that shone from underneath a circular canal surrounding the middle top section of the device. It’s a hard-to-beat design and the Ubiquiti NanoHD looks pretty much the same, only a tad smaller.

That’s right, the Ubiquiti NanoHD has kept the same minimalist look and, to keep up with some of its competitors (I noticed that the newer APs have become smaller – check the EnGenius EAP245), the device now measures 6.30 x 6.30 x 1.29 inches, so the reduction is mostly done to the footprint of the wireless access point (the device weighs 10.6 ounces, so it’s only a bit lighter than its predecessor). The case is also covered by a white matte finish and I noticed that while the UAP-AC-Pro was completely made of plastic, the Ubiquiti NanoHD does have a plastic top, but the bottom part seems to be made out of zinc alloy to better dissipate the heat (and this device does need any means to keep the temperature low). 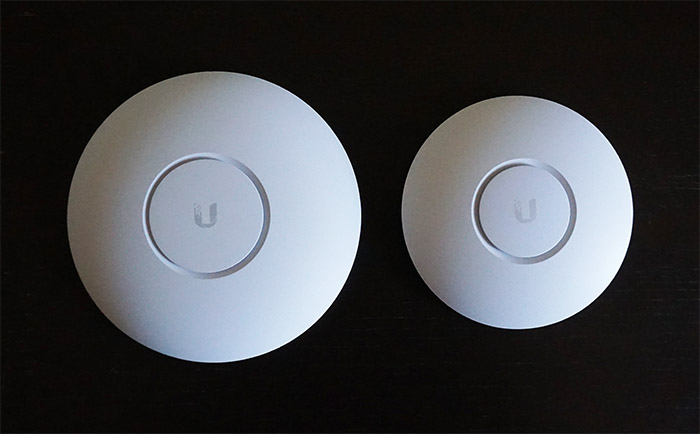 The narrow canal for the LED is also a bit wider which means that the light will shine brighter on the NanoHD and it still has the same role as on the UAP-AC-PRO: if the LED is white, then the AP is not yet configured and waiting to be paired, otherwise, if the LED gets solid blue, then the device has been successfully added to a network and it is working properly; when the LED rapidly flashes blue, then the UniFi controller is trying to locate the access point and, when the LED is flashing blue slowly, then the Ubiquiti nanoHD is in an isolated state (doesn’t receive Internet from the router). If you flip the device upside down, you will immediately notice that the silicone cover from the UAP-AC-PRO is gone and the port(s) area is now fully exposed. Here, you will be able to find a Reset button (press and release it quickly to restart the nanoHD and, if you press and hold it for more than five seconds, then the device will return to its factory default settings) and a single Gigabit Ethernet port (802.3af PoE+). 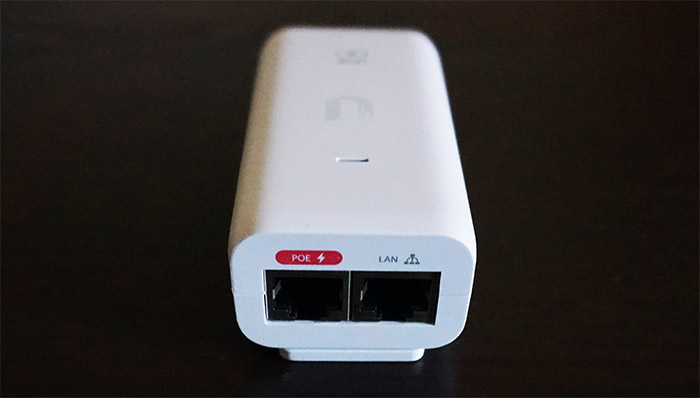 I know that it does make sense for a ceiling PoE wireless access point to only use a single LAN port, but Ubiquiti has added a canal to let the cable flow through if needed, so they did take the possibility that some users may simply keep it on a flat surface and an additional Ethernet port would have been a welcomed addition for connecting nearby wired clients.

In order to install it on a wall or ceiling, Ubiquiti has added a mounting kit in the package (screws, nuts, metallic backing plate and a mounting bracket) and there’s also an 802.11af PoE adapter, so you don’t have to buy your own. Like I said before, there is no silicone cover to protect the port, so, while the UAP-AC-PRO was advertised as suitable for outdoors, the UAP-nanoHD is an indoors-only wireless access point (as I opened the case, there was no glue or anything of the sorts to keep any water from reaching the internal hardware, specially around the Ethernet port). 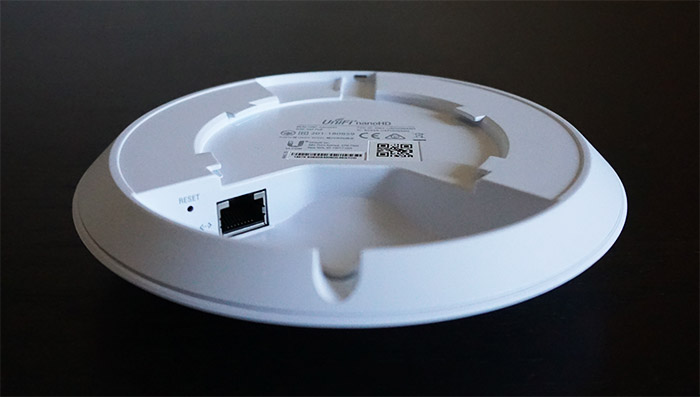 When dealing with a device of this size and no cut-outs for keeping the temperature low, it’s easy to assume that the Ubiquiti nanoHD is going to get warmer than its competitors (and the UAP access points are known for running a bit hot).
As expected, this is the case with the NanoHD and, yes, the zinc alloy bottom does a good job at dissipating the heat, but the case still gets hot to the touch at the bottom, near the port.

To open the case, you need to use a prying tool and carefully go around the middle until the top part will pop off (there are no hidden screws as on other devices) – be careful though, since this will most likely void the warranty. The first thing that you’re going to notice is the antenna pattern on the PCB, as well as some other components: there’s a M-Tek G24101SCGX 1941H 100/1000 Base-T transformer module, a MT3058 939J1 step-down converter and a Mouser C1585-AL CoilCraft signal transformer. 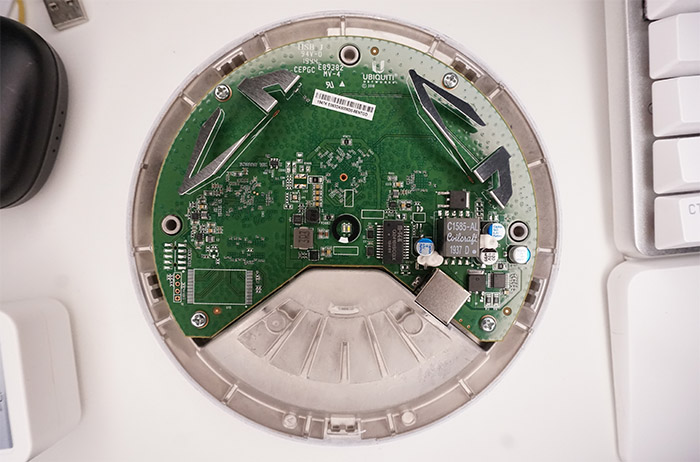 Features and Wireless Performance
The Ubiquiti nanoHD has kept most of the features of the UAP-AC-PRO (it has also improved a few), so if you intend to use several access points on a larger site, you can take advantage of the mesh technology. Yes, Ubiquiti calls it Uplink, but it functions in a similar manner to the proprietary implementation from the WiFi systems (such as Google WiFi or Eero WiFi): one access point will be connected to the router, while the other UAPs get spread across a larger area and all these devices will communicate wirelessly to create multi-hop systems and connect to far away clients. It’s worth mentioning that one wired UAP unit (that connects to the router) can support only up to four wireless downlinks (APs) which is sensible since even with a couple of dual-band routers, you have to deal with the backhaul traffic which will eat up a large portion of the bandwidth. 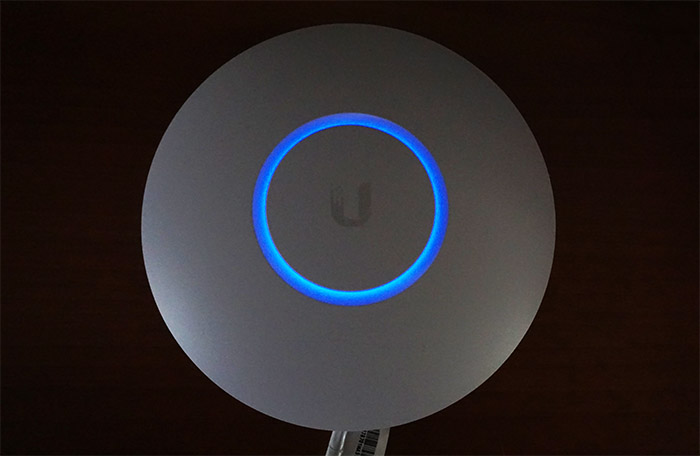 Another interesting feature is the support for the Fast Roaming (similar to the 802.11r, but with a far wider compatibility) which makes sure that the handshake between wireless access point is done before the clients starts moving (the client doesn’t need to re-authenticate at every AP, so the handoff between them is done a lot faster).

The UAP-AC-PRO lacked the MU-MIMO technology which is now a part of the Ubiquiti NanoHD, so, if you have compatible clients, they will be served at the same time, without needing to compete for the bandwidth. The UAP-nanoHD will also have a better wireless performance due to the BeamForming technology which has the role of focusing the signal towards the compatible clients, instead of broadcasting it everywhere, therefore reducing the interference.

In order to test the wireless performance of the Ubiquiti NanoHD, I had to rely on an unmanaged PoE switch, the TRENDnet TPE-LG80 (since it has a single Ethernet port..): I connected the server PC to the switch, as well as the Internet cable from the router and the access point.

The client device will first connect to the 5GHz WiFi network (since the Ubiquiti NanoHD supports it, I set it to 160MHz channel bandwidth) and it’s necessary to mention that the client computer was equipped with a TP-Link TX3000E WiFi adapter.

UPDATE: I have retested the Ubiquiti nanoHD to include some additional data (larger distance + signal strength), but I haven’t changed neither the client device, nor the setup that I used when I first tested the device.

I’m quite sure that most of you will use whichever WiFi adapter is in your laptop, so I decided to change to client and use one equipped with an Intel 2×2 8265 WiFi card. This way, while the client device was connected to the 5GHz network (80MHz, since this is the limit for this card), from the client to the server, I measured an average of 565Mbps (-48dB) at 5 feet and an average of 263Mbps at 30 feet. At 70 feet, the average throughput was 5.5Mbps. 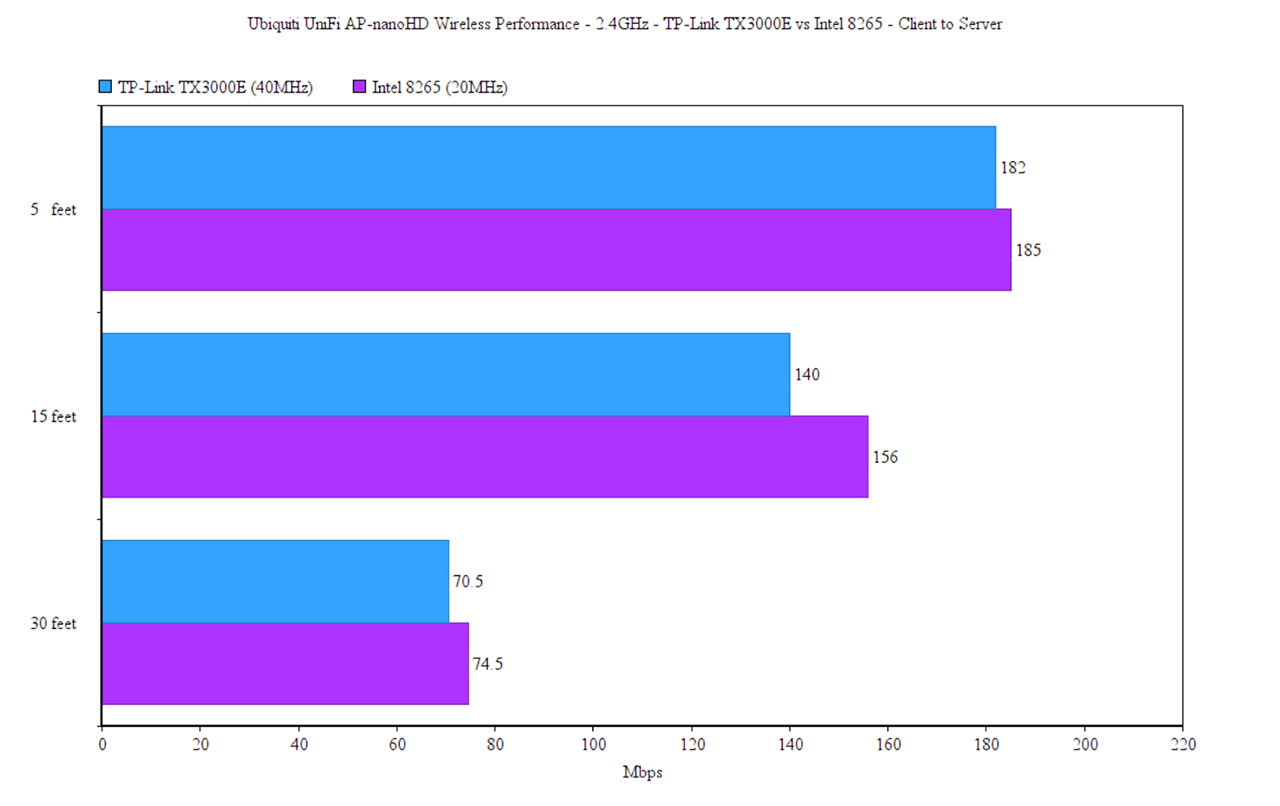 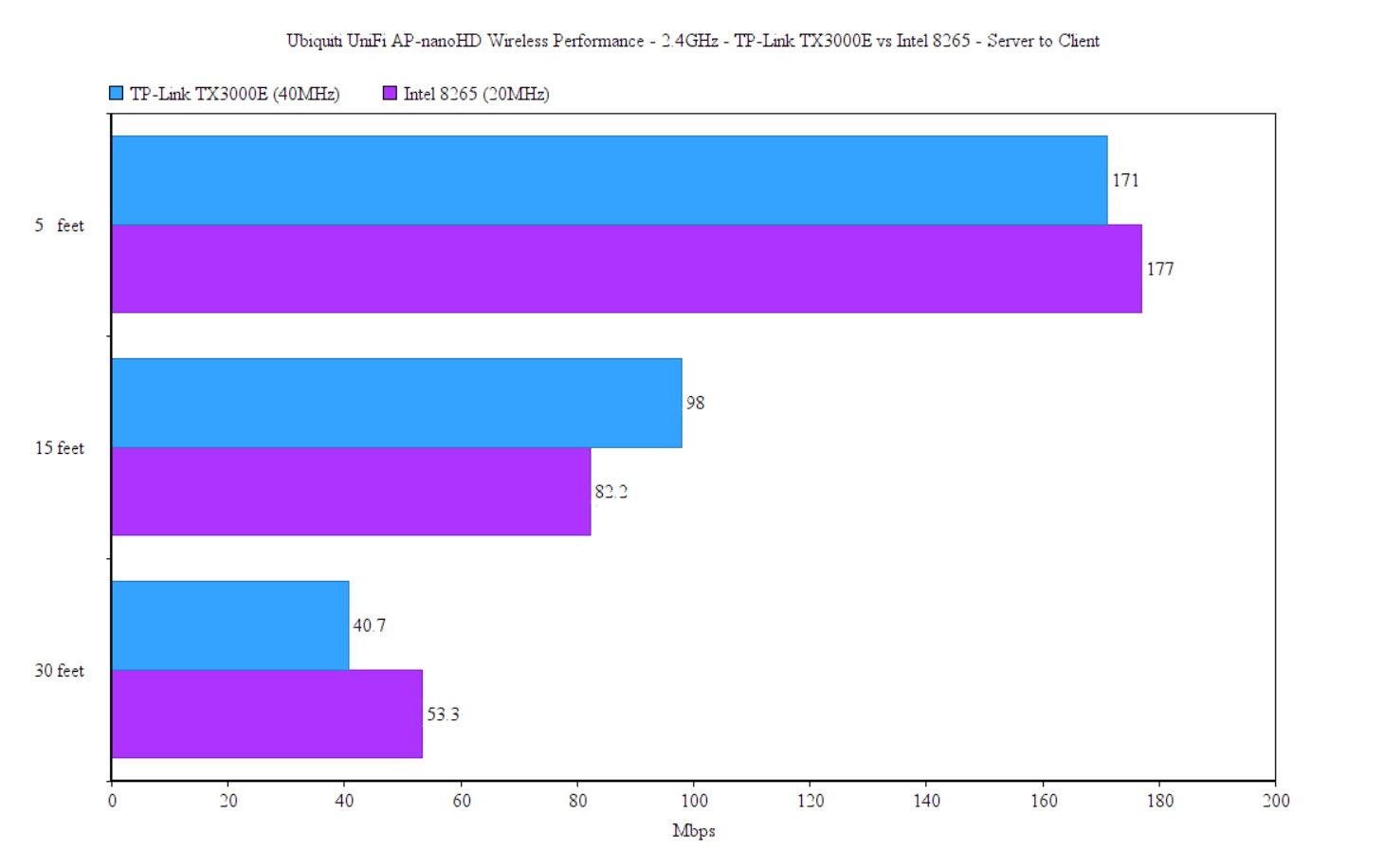 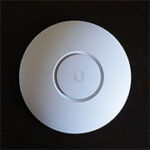