And this doesn’t happen only with newly added cameras, it has occurred several times by just checking the live footage randomly. You can view all the cameras at the same time, but you can also check each channel individually. This way, you’ll see the stream at the top, while immediately underneath, there are three icons, one for allowing you to speak through the camera, the other for taking a screenshot and the last one is useful to start recording a video.

The Playback option is actually really well done since you can view all the footage that the camera recorded in a chosen day and you can easily go to a specific hour or minute by simply sliding your finger up and down. There aren’t many other features available, but you can tap on the cogwheel to summon the Sound and Light Alert settings where you can enable the One key alarm (to quickly get notified by any potential intruder) and enable the Sound and Light Alert (choose the sound level – goes up to about 85dB).

You can also choose the Detection Mode (motion and or humanoid alarm) and the Night Vision which can be Color, Black and White or Smart Night Vision (automatically switches between the two aforementioned modes).

The Image Quality and the Performance

Before diving into the actual image quality, let’s talk a bit about how the cameras worked along with the NVR. I say that because I noticed some occasional issues. For example, as you have seen in the footage from the NVR, sometimes, one or two cameras would glitch for a second. Disconnecting the cable and reconnecting it did seem to help, but I still see glitches appearing from time to time. That being said, I do need to mention that the day-time footage is good and there is a suitable amount of detail.

As you can see, I pointed the camera a bit far, to about 100 feet and the video quality is good, very good actually since it’s possible to even see the plate numbers of moving cars which is fantastic. Very often, before a break-in, there are cars that either are parked nearby or drive slowly to observe your schedule. So, being able to get the plate number from that many feet away is excellent.

The colors are a bit contrasty, but then again, it’s not that much different from real life. I was in Italy and during the summer, every color gets a boost. The viewing angle is fairly large and I did like a lot that the image doesn’t distort that much at the edges. So, in terms of video quality during the day, the Zosi 4K PoE security camera system performs better than expected. What you don’t know though is how I was able to capture these videos.

The app will tell you that you need to press record and then after agreeing to the permissions, you get to store the videos locally (on the phone). And it’s true for some videos, but not for all. For whatever reason, the HD videos will not save locally and I tried on both Android and iOS, so I had to pretty much screen record my phone to see the footage. The good news is that you can see it in the Playback section, but this is a very big issue that needs to be fixed asap. Another problem that I encountered was that I got the message that ‘Only one user allowed to playback’.

I was the only one checking the footage, so why would the app think that there are other people checking it? It seems to be a conflict within the app and with the other device that I installed it (even if I was checking the playback on one phone only). Anyway, I got the footage and I have checked it for a longer duration to see if there are any freezes. And there were a couple, but they only happened with the max resolution, while at SD image quality, everything was smoother. I think it’s the processing power of the NVR that may need to be upped a bit. What about during the night?

There are a few quirks and issues here as well. As before, the videos that I captured were not saved, but I could see them in the Playback section, so I recovered them. The Zosi 4K PoE security system can film in black and white, as well as in color and there are actually three separate modes, not two. The first is the black and white footage which works really well even if it’s almost pitch black (I filmed a tree and there was only light from the moon). Then, if there is even a low light source in the vicinity, the camera will switch the IR LEDs off to film in color.

It reminded me of the Annke NC400, so you don’t really need the two spotlights if there is enough light during the night. The third mode uses the two spotlights to also deliver a color night vision. I don’t think I would be able to see car plates, but there was a good amount of detail and the shadows weren’t too dark as to allow people (or animals) to hide in the bush or in a dark corner. That’s the good part. The bad one is the algorithm.

If there is a small amount of light, the camera does switch to colored night vision, turning off the LEDs, but a few seconds after, it will switch them back on. And then off and then on. Again and again for hours, days, months and even switching to the smart night vision didn’t help. If it’s dark enough, the black and white vision remains steady.

As for the motion detection, I actually had the opportunity to see it in action because a couple of people on their bikes went in front of the camera and, as you can see from the video, the Zosi 4K PoE security camera system identified them properly as people, while the moving cars were identified as objects. So it works as intended, even in the distance.

The Zosi 4K PoE security system is an ambitious project and it does deliver in some key aspects. The video quality is really good, especially during the day, the cameras are robust and you get the complete installation kit, including the Ethernet and VGA cables. The NVR is compact, has lots of ports available, it supports PoE and has a 2TB HDD already installed. And the price tag is very competitive, it’s actually one of the most inexpensive 4K security systems out there.

But there are some issues as well. The app is very moody and I would not trust it as the only way to check the footage – the monitor + mouse works much better. Also, the night vision weird behavior with the IR LED suggests that the algorithm needs a bit more improvements. So yes, there is potential for a great security system here, but Zosi needs to fix some of the issues that I mentioned to be truly competitive with the other brands. 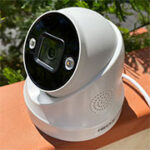