With the WiFi 6 gaining more momentum, it was only a matter of time until the manufacturers released some enterprise level 802.11ax wireless access points to the market and it seems that Zyxel already has multiple options to choose from, depending on your needs and, more importantly, your budget. The Zyxel WAX650S is currently the best equipped model from the WiFi 6 Unified Pro series which means that besides sporting the expected features (such as OFDMA, MU-MIMO, 160MHz channel bandwidth), the device is also equipped with a 5GbE port (PoE++) and the engineering team seems to have made some interesting adjustments inside the case to reduce the impact of noise on the signal.

Being a part of the Unified Pro series means that the device can be used as a stand-alone WAP (using a comprehensive local management software), along with the NXC controller or by relying on the Nebula Cloud Center platform.
And this is the type of flexibility that needs to be appreciated, since it’s good practice to keep yourself protected in case the Cloud service either gets canceled (although, there are very low chances) or doesn’t offer the required features anymore – there’s also the possibility that the service will get too pricey (as Ubiquiti has done not too long ago). 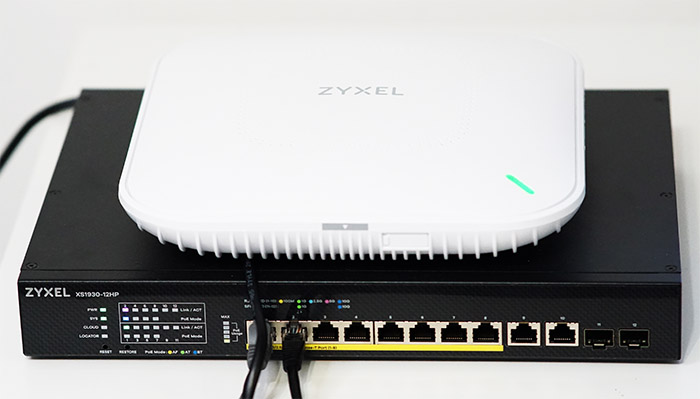 The problem is that similarly to the consumer market, the SMBs will have a hard time upgrading all the hardware since this new technology requires pretty much a complete change of equipment, but, if you’re already using multi-Gigabit Ethernet switches (preferably supporting PoE++), then the Zyxel WAX650S should immediately find it’s place within your network. That being said, let’s test the Zyxel WAX650S and see how it performs when compared to some of its main competitors.

The more powerful the access point, the larger is going to be and, while that’s not always the case (as we can see with the slim EnGenius ECW230), the Zyxel WAX650S is definitely not among the most compact wireless APs out there. Instead, we’re dealing with a 9.06-inches wide, 9.25-inches deep and 2.11-inches tall case which is definitely going to attract some attention towards itself when mounted on the ceiling (but that’s a small compromise for the actual performance increase that you should see using this device). It’s worth mentioning that I have opened the case and considering the way it’s built (multiple layers), I’m actually surprised that they managed to keep the case as compact as it is. 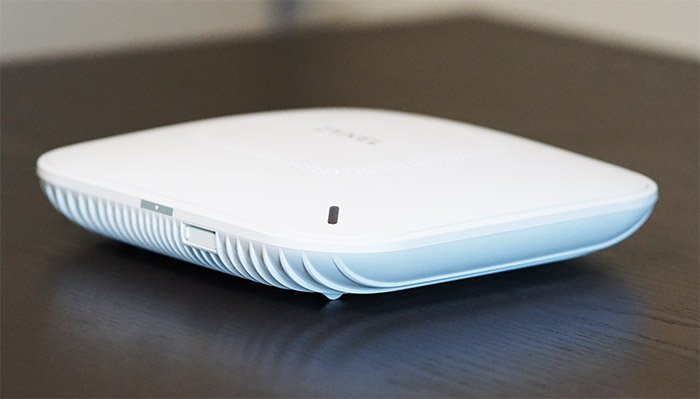 The case is made of plastic in its entirety, but on the inside, Zyxel has added a few metallic pieces that similarly to the metallic section on the EnGenius ECW230 has the role of taking the heat away from the circuits and push it through the cut-outs. And yes, the bottom part of the access point is almost entirely covered by thin cut-outs, allowing the heat to pass through.It’s definitely an interesting heat management system since this way, you don’t get that hot-to-the-touch metallic case and it works really well since the device remained at a decent temperature while I was testing it – there were some warm spots near the ports, as well as near the middle on the top and bottom side of the AP. At the top of the WAX650S, surrounding the Zyxel logo, there is an unobtrusive pattern of puncture holes that will also help a little bit with keeping the internal temperature at a reasonable level. Next to this pattern (on the bottom left corner), Zyxel has decided to add a single LED to show the status of the network – the LED is surprisingly unassuming, despite its size, but you can also turn it off from the software if it bothers you.

I always prefer the array of LEDs in favor of the Single LED system due to its unintuitive nature, but that’s what Zyxel preferred, so let’s go over some of its functions. When the wireless access point is starting up, the LED will flash amber and green (each for one second) and when the LED get steady green, then the device is ready to be used (the interface is activated, the WAX650S is in full-power mode and there are wireless clients connected to the AP). If the LED is solid bright blue, then there are no wireless clients connected and a solid amber LED is similar to the solid green, but the device is in limited power mode; if the LED is solid red, then either the access point has failed to boot or it’s experiencing a system failure. 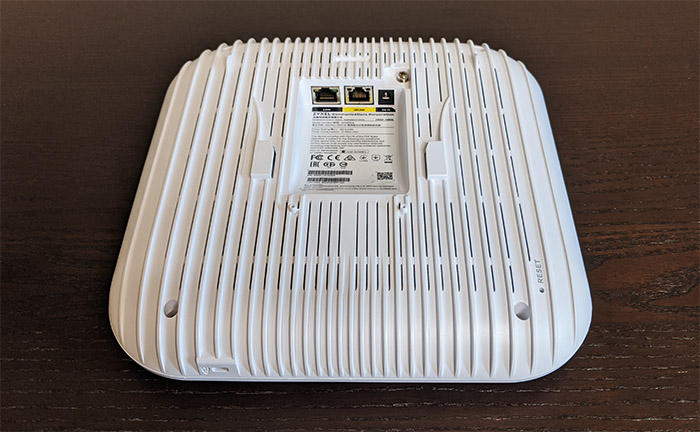 I have mentioned full and limited power modes and it pertains to the Uplink port which, besides supporting speeds up to 5Gbps (including 1GbE and 2.5GbE modes), it needs to be connected to a PoE++ (802.3bt) source if you want to get the best performance. Thankfully, Zyxel does have a compatible Ethernet switch called the XS1930-12HP which I have used to power on the access point and conduct the wireless tests. The PoE port can be found on the bottom of the WAX650S, inside a dedicated recessed section, along with a LAN 1 port and a DC-In power connector – useful if you don’t have an Ethernet switch or PoE adapter. The LAN 1 port is limited to 1Gbps, but quite useful in case you want to connect a wired client device. Next to the ports area, there is a grounding screw and farther away, you should be able to see the recessed Reset button; if you look along the side of the access point, there is a Kensington slot and a Console port that is covered by a silicone piece.
Note: Inside the package, you can only find the mounting bracket (that you can slide onto the back of the AP), some screws and a transparent protective cover, but there is no power adapter, PoE adapter or Ethernet cable.

To open the case of the WAX650S, you need to remove the four screws on the bottom and then use a prying tool to carefully detach the two plastic parts. You will immediately see that one side has a metallic part attached to it and various thermal pads that have the role of conducting the heat towards it from the chipsets. The PCB has lots of aluminum covers that need to be removed if you want to have a look at the AP’s components and doing so, will reveal the same Qualcomm IPQ8072A chipset as on the EnGenius ECW230 (also quad-core ARM Cortex A53S CPU which is clocked at 2.0GHz), followed by 512 MB of DDR3(L) from Nanya (NT5CC256M16ER-EK), 512 MB of flash memory from Winbond (W29N02GZSIBA) along with 8 MB flash memory also from Winbond (25Q64FWS1G 1926).

Furthermore, I saw a GST5009 LF 2003M Base-T Magnetics Module, an Atheros AR8033-AL1A 10Mbps/100Mbps/1Gbps PHY (for the LAN port), am AQrate AQR114C Gen 2 Ethernet 5Gbps/2.5Gbps/1Gbps/100Mbps PHY (for the Uplink port) and a Texas Instruments CC2640R2F BlueTooth wireless micro-controller which means that the Zyxel WAX650S is ready to support IoT connections (but it seems to be a latent feature). 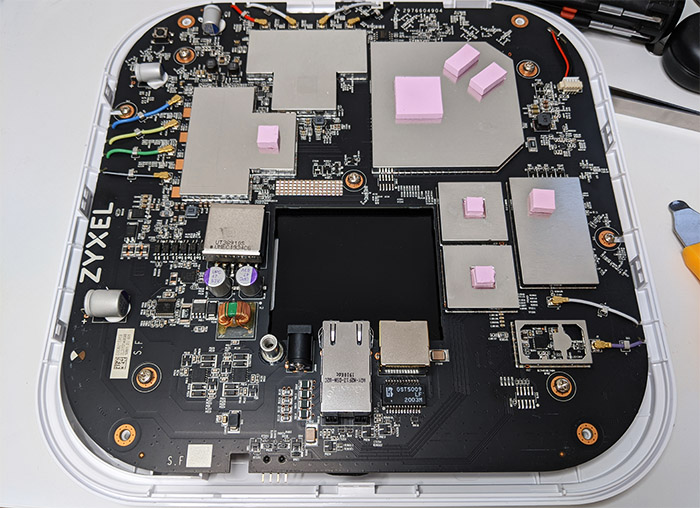 Since it’s equipped with the Qualcomm IPQ8072A chipset, it means that the Zyxel WAX650S is not WiFi certified, but it still offers most of the expected features, although not all at their maximum potential. That being said, the wireless access point does make use of OFDMA which is one of the best innovations from the WiFi 6 standard since it helps improving the network performance and keep the latency low by dividing a single channel bandwidth into multiple resource units (orthogonal sub-carriers). The WiFi 6 promises that the OFDMA will be available on both upstream and downstream, but, most AX devices have it implemented solely on the downstream – the WAX650S has OFDMA implemenetd both upstream and downstream. Additionally, the new WiFi standard has also normalized some ‘exotic’ features that were also present into the WiFi 5, such as the 1024-QAM modulation or the 160MHz channel bandwidth. And, unlike the EnGenius EWS230, the Zyxel WAX650S does support both (the former is stuck at 80MHz), but this also seems to mean that the price tag is going to be higher. 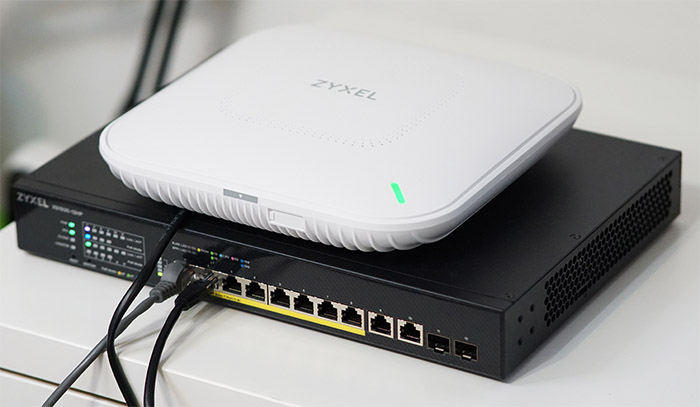 The Zyxel WAX650S also offers MU-MIMO (4×4) which will help if you have compatible clients, since they’ll be served at the same time (no round-robin technique) and there’s BeamForming (remember that smart antenna pattern?) which helps focus the signal towards the client device and not broadcast it everywhere hoping that it will reach them. All these sound great, but are there compatible clients around? The unexpected news is that yes, the client devices that support the 802.11ax standard are indeed growing since most large smartphone brands have added it with their flagship devices and I have seen that lots of new laptops do support WiFi 6. The thing is that lots of people still don’t really need the increased performance from the WiFi 6 routers or access points and will do just fine with the previous standard, especially since some manufacturers (Asus) have already announced WiFi 6E devices at the end of the year. As for the SMB market, there are lots of businesses that will definitely make use of the increased performance, but they will also have to upgrade every other hardware part to not get any bottlenecks. 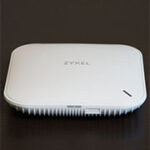