The EnGenius ECW230 is the current flagship Cloud Managed indoor wireless access point, offering most of the expected features from the WiFi 6 standard, such as OFDMA, Target Wake Time (for IoT devices), MU-MIMO (4×4) and the device is also the only one (so far) from the series to have a 2.5 Gigabit PoE port. Yes, the WiFi 6 and the 2.5Gb port should go well hand in hand since a Gigabit port would have limited the true potential of the wireless access point, but it’s important to understand from the get-go that this device is targeted towards SMBs and not really suitable for the consumer audience.

The reason is mostly the software which is built to help manage multiple sites with more than one wireless access points and to use it, the user needs to be comfortable with the Cloud management platform (which again, is an advantage mostly for SMBs).
Of course, the EnGenius Cloud platform, even though it’s following the enterprise guidelines, it’s still perfectly usable for home users (the tech enthusiasts), especially thanks to the app. I know that the adoption of any new technology in the enterprise world is perceived as being a lot slower than on the consumer market, but a lot of businesses already use Ethernet switches with multi-Gigabit ports, so an access point that can leverage this advantage is always a welcomed addition to the network. 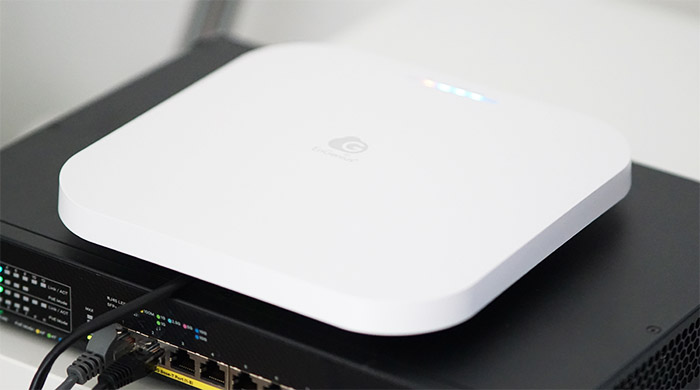 That being said, let’s have a closer look at the EnGenius ECW230 and see whether they got it right implementing the new WiFi 6 technology.
Note: The EnGenius ECW230 is pretty much identical to the EWS377AP (hardware-wise), the difference being that the latter is On Premises AP, while the former is purely Cloud Managed.

I have recently tested the EnGenius ECW120 which is a part of the same Cloud managed indoor WAP series and I was surprised to see that the far more powerful ECW230 is actually more compact, managing to achieve a very unobtrusive look when mounted on the ceiling. And that’s mainly because the case is very slim, despite sporting some generous proportions (it measures 8.27 x 8.27 x 1.31 inches) and has a flat, minimalist top. Indeed, besides the light gray logo and icons, and the slim LED bar, there is nothing else going on the top of the device, the visible section being entirely covered by a white matte finish. While the top part is made of plastic, the bottom is metallic (zinc alloy, maybe) and it’s covered by a gray finish, relying on four screws to keep the two sections together. Since this is a ceiling-mount wireless access point, there are no external antennas (it does have an intricate system inside the case) and, on the bottom side, there are two sections that allow mounting the device using the provided brackets or relying on a couple of screws (in case you want to put it on the wall).

The slim profile does help give the the ECW230 an unassuming look and I do think it’s one of the best designed WiFi 6 wireless access points out there, but what about the heat management? More often than not, slim wireless access points (such as the Ubiquiti UAP-AC-Pro) suffer from poor heat management since there is little room inside and sometimes, the case is completely sealed. And, at first glance, the EnGenius ECW230 may suffer the same fate since the only cut-outs that I could see are on the bottom, near the mounting ears. The good news is that after I opened the case, I saw that EnGenius has added thermal conductive pads on almost every chip, as well as aluminum covers to dissipate the heat. I also saw that the IPQ8072A chipset has a large pad that gets in direct contact with the metallic case in order to push the heat towards outside.

Despite all that, the metallic case still gets warm to hot exactly were it gets in contact with the chip pad. The LED bar may be subtle, but the LEDs are very bright (you can turn off each of them individually from the controller) and, from the left, there’s the Power LED, the LAN LED, as well as the 2.4GHz and the 5GHz LEDs. The Power LED will blink orange until you pair the access point to the Cloud controller (at which point, it will become steady orange), while the rest of the LEDs should be solid blue, unless something goes wrong with the WiFi network or the LAN connection to the router/switch. As for the ports section, things aren’t that ideal. You can find it on the bottom in a carved-in rectangular section and, unfortunately, there is no cut-out for the cables. It’s still not a big issue considering that the mounting ears slightly protrude outwards, but it’s not the most elegant solution.

That being, said, here, you’ll be able to find a small recessed Reset button (press and hold it for 10 seconds to return the access point to its default factory settings), a 2.5 Gigabit PoE port (it supports 802.3at PoE and it requires a maximum budget of 19.5W) and a 12VDC/2A power port. You can use a non-PoE port for connecting the access point to the router and a power cable to power the device, but, ideally, you should either rely on a PoE Ethernet switch or on a PoE adapter. Unfortunately, besides the mounting brackets and the ECW230 itself, nothing else is provided in the package, so you have to purchase what you need separately (and it’s not really an inexpensive wireless access point). Other than that, I have also noticed that there is a Kensington slot on the side of the device.

After opening the case (removing the four screws from the bottom), I could immediately see the PCB and the large numbers of antennas that are attached to the metallic part of the device. On this side, I was able to identify only the MT774 O4KG4 LED driver, so I had to carefully remove a few antenna cables in order to switch the PCB upside down. Doing so, has revealed that the EnGenius ECW230 is equipped with a Qualcomm Atheros IPQ8072A chipset (quad-core ARM Cortex A53S CPU clocked at 2.0GHz) which is a part of the Hawkeye series. There’s also 256 MB of flash memory from MXIC (X200614 MX30LF2G18AC-XKI), a Qualcomm QCA8081 Ethernet PHY transceiver, a Qualcomm PMP8074 power management FBGA and what seems to be 512 MB of DDR3-1866 RAM from Micron (MT41K256M16TW). 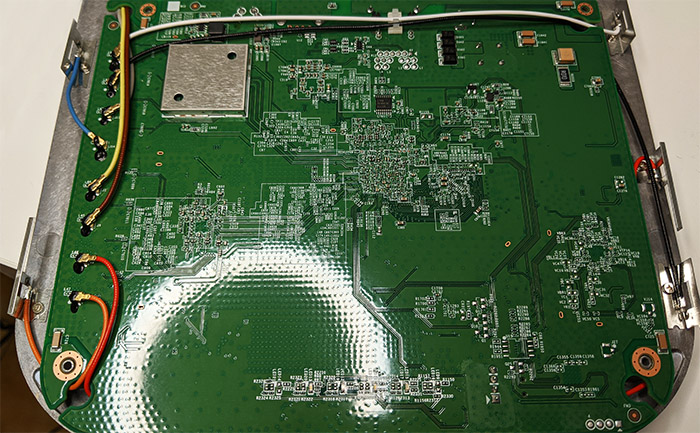 I have already tested a few WiFi 6 consumer-level routers, such as the Asus RT-AX82U and the Netgear RAX40, so I have an idea about what the user needs to expect from this new WiFi technology, even though the aforementioned devices are part of the draft stage – well, the EnGenius ECW230 is not WiFi 6 certified either. That being said, one of the best technologies is the OFDMA which has the role of creating a more efficient network by dividing the channel bandwidth in smaller orthogonal sub-carriers. This means that transmitting smaller packets would be done with less latency – the good news is that this technology is applied to both upstream and downstream traffic. Afterwards, the ECW230 supports the 1024-QAM modulation and 80MHz channel bandwidth – yes, there is no support for 160MHz, but I don’t really blame them since this is a costly implementation (I have seen it on Zyxel WAX650S which costs a great deal more at the moment of writing). As with most wireless access points and especially the Cloud managed ones, the ECW230 can be added to a mesh network. 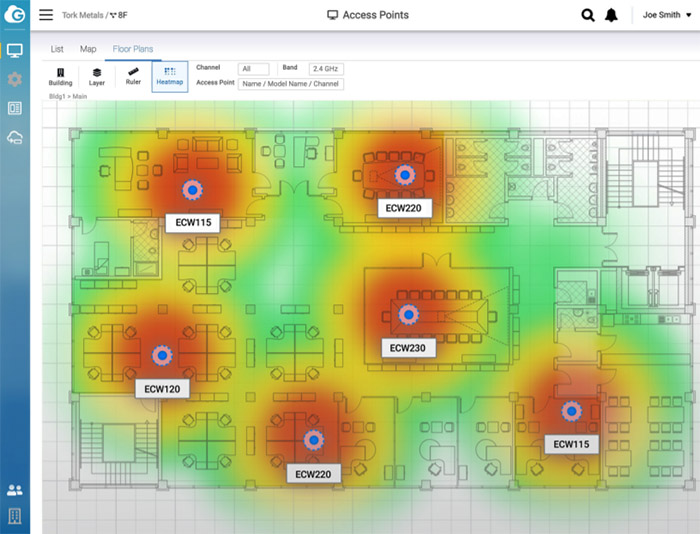 This features has been available for a bit on the EnGenius controller and the models don’t have to be identical, only compatible (and the newest ones are). Like with any dual-band WiFi mesh system, I would not go farther than one hop since the bandwidth will get severely crippled by the backhaul traffic; the WiFi 6 should be more forgiving, but the experience will still not be ideal (and it would not be the best use of expensive hardware). Another technology that was very common with the WiFi 5 devices and can reach newer performance heights on the WIFi 6 is MU-MIMO which, in the case of the ECW230, is 4×4 (the WiFi 6 allows up to 8×8). But you still need to use compatible client devices in order to take full advantage of this technology (and unfortunately, there aren’t many WiFi 6 adapters around and from my knowledge, no 4×4 WiFi adapter). Lastly, the EnGenius ECW230 uses BeamForming to ensure that the signal is targeted towards the compatible wireless clients, minimizing the impact of interference and offering a better throughput.

These are the main WiFi features, so let’s have a look at the wireless performance. Before checking out the results, let’s talk a bit about the testing procedure since it’s a bit different than with other devices that I had a look until now and that’s mainly because of the 2.5GB port. I still used two computers, one as the server and the other as the client, but I had to rely on a different server device this time: a MacBook Pro. That’s because it has a Thunderbolt 3 port and I could make use of a QNA-UC5G1T which is a 5Gb Ethernet adapter since it should provide me with a multi-Gigabit connection. Next, the EnGenius ECW230 has a single port, so I had to use a PoE Ethernet switch to power it and to connect the server device. Thankfully, Zyxel just sent me one of their latest Ethernet switch that has 10 multiGigabit ports (10Gb to be more precise) and it’s also PoE – it also supports 2.5Gb and 5Gb (be aware that not all Ethernet switches do). As for the client device, I used the same computer equipped with the TP-Link TX3000E adapter and it’s the best the consumer-level market has to offer right now: AX3000 2×2. 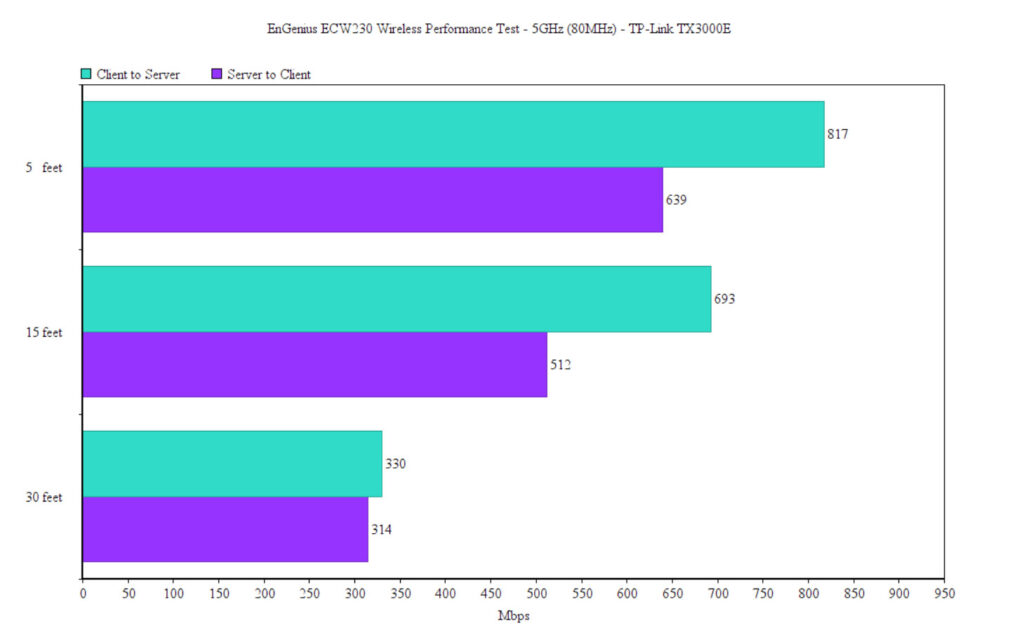 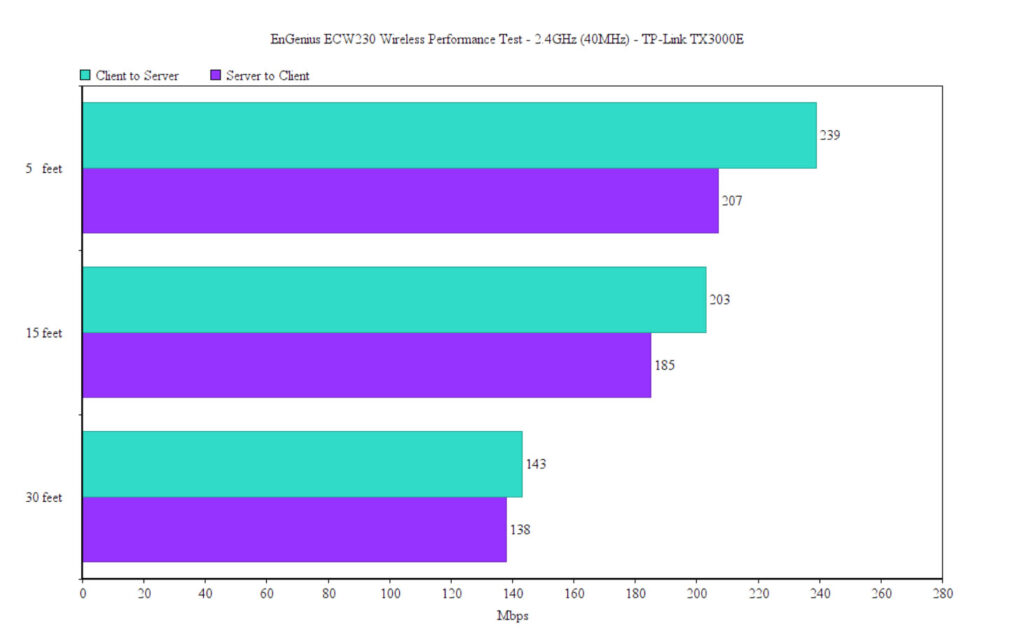 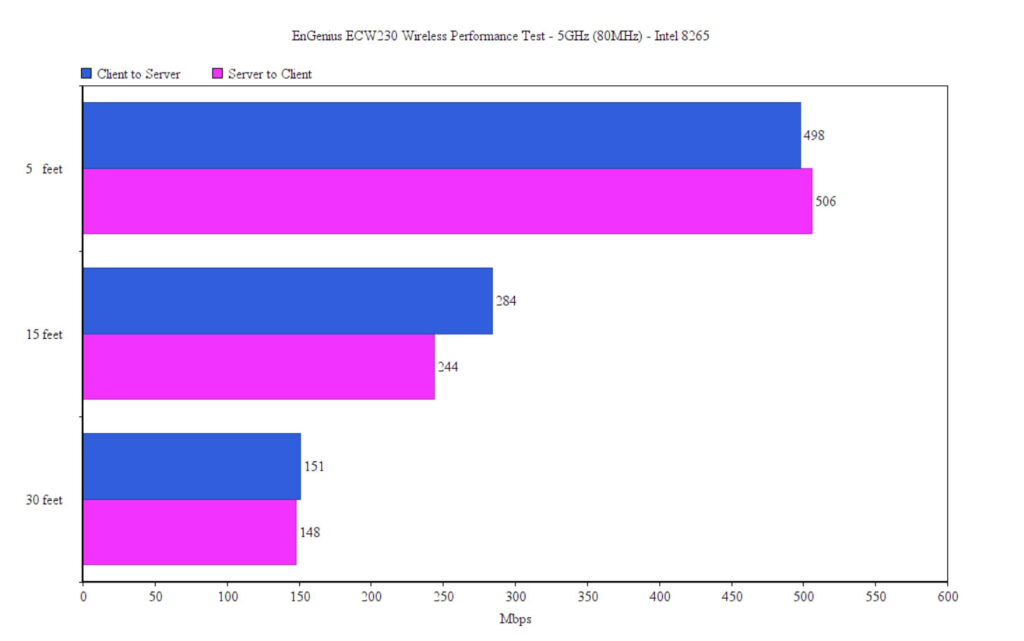 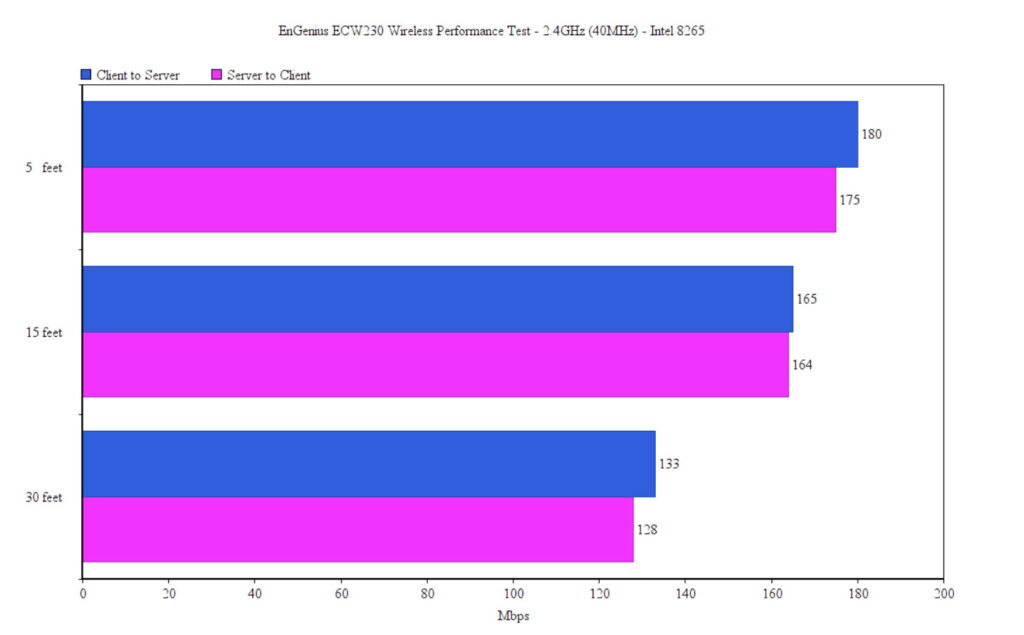 After powering up the EnGenius ECW230 (using either a PoE Ethernet switch, a PoE adapter of simply relying on a 12V DC power cable), you can immediately start the installation process which is pretty much identical to the ECW120 (and any other wireless access point from the EnGenius Cloud Managed AP series). But, before that, it’s worth mentioning that there is a stand-alone software which does offer some very basic options. To access it, you need to find out what’s the IP of the access point (just check the client list from your router) and enter it in the URL: when prompted, enter admin/admin for the username and password. 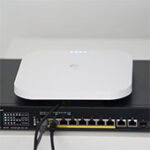